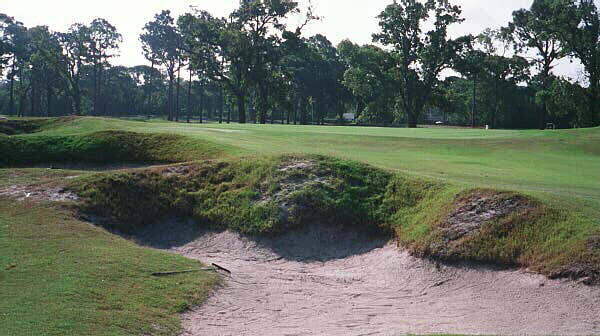 The public golfer is no longer insulted by flat, lifeless bunkers. This diagonal array of restored bunkers guard the approach to the 405 yard 10th hole.

Starting with St. Andrews, the local municipal course has historically provided fun and challenge for the people in its township. Of course, some townships are luckier than others and one of the luckiest of all are the people who live in the city of Wilmington, North Carolina.

At the same time in 1925 that Donald Ross was building the nearby private course for Cape Fear Country Club, the City of Wilmington contracted with him to build an 18 hole public access course on sandy soil on a 180 acre tract of land some three miles from the Atlantic Ocean. Ross responded with a fine design that was an immediate hit with the locals and that enjoyed a good reputation throughout the Carolinas, in part because its bunkering schemes were so well done. 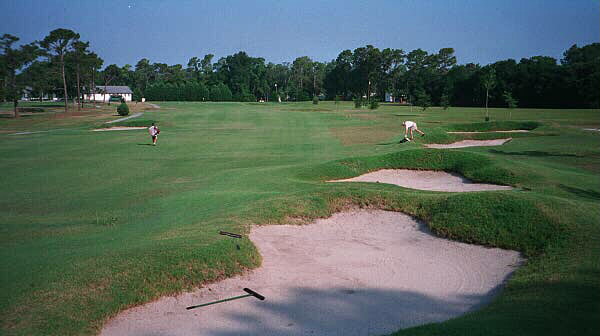 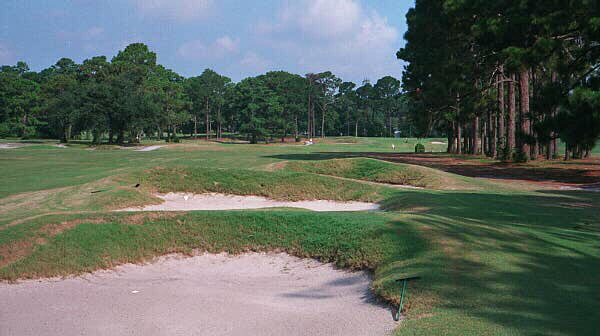 …these protect the inside of the dogleg 12th hole.

However, with year around golfing weather and the golf mad people in Wilmington, the course was subjected to 75,000 plus rounds per year. Coupled with general erosion, such wear eventually took its toll. Almost half of the original 72 bunkers were filled in or lost through time. By the mid-1990s, the greenside bunkers were worn out to where golfers could readily putt out of many of them. In the case of the Wilmington Golf Course, the bunkers are the predominate hazard that need to be avoided and with their challenge reduced, the integrity of the course was diminished.

Reid Schronce, the Golf Course Manager and a PGA Member, knew something needed to be done and The City of Wilmington debated what steps to take. Fortuitously, Michael Fay of the Donald Ross Society happened to pay a visit to fellow DRS member Walker Taylor IV around that very time in 1996. Based on Fay’s subsequent recommendation after having seen the course, a series of events were put in motion that ultimately led to the complete restoration of all 72 bunkers. Not only was the work first rate but it was also done at a fraction of what it typically costs. Specifically, with people like golf architect Ron Prichard waiving their usual fee, the cost to restore each bunker was well under $3,000, which includes the shaping, bunker sand, sod, and labor of a three person crew.

The Ross Society provided two fold help for the City of Wilmington to undertake the bunker restoration project. The first was monetary in that they pledged $7,000 to defray some of the cost of the work. More importantly, they volunteered that Tom Devane, who was in DRS’s internship program under Ron Prichard, would provide onsite supervision to restore all 72 bunkers. Thrilled by this support, the City in turn donated the use of a backhoe, dump truck, and employee assistance.

The project commenced in July 1998 with the City selecting Clyde Johnston Designs, Inc, who subcontracted the work to Southeastern Golf, Inc based in Georgia to provide the labor, equipment, equipment operators. Construction started on July 6th, 1998 and the grand opening was on October 24th of the same year.

The Green Keeper Greg Cross was heavily involved each step of the way and the end result was a collaborative effort of the sort that is curiously rarely seen. In the end, with the bunkers returned to their original configurations and depths of four to five feet, Ross’s design once again plays as he intended. It provides just the right blend of challenge and fun for the golfer while still allowing Cross to maintain the course under its tight maintenance budget.

The course occupies a 140 acres of maintainable ground and Crosshas his hands full given his $400,000 per annum budget. Ironically, there are several resulting benefits from the limited budget that are painfully absent at many private country clubs.

First, watering the course comes with a price tag and Cross only waters it enough to keep the grass alive. The joyous result is that the course plays as firm and fast as any course in the country with which the authors are familiar. Ross designed courses in the 1920s with the ground game in mind and theRoss bunkers that are 5 -15 yards short of the putting surface are actually in play as the golfer only has to carry them by a few yards to see his ball bounce onto the green.

Second, there are exposed sandy areas throughout the course, especially along the edges of the fairways. If the player strays from the fairway, his lie is unpredictable, which is as it should be for heaven’s sake! If a private club occupied the same property, the odds are that it would have bermuda grass from property edge to property edge. This would be a shame as it a) only adds to the overall maintenance upkeep and b) masks the course’s trump card, which is its sandy base and proximity to the ocean. 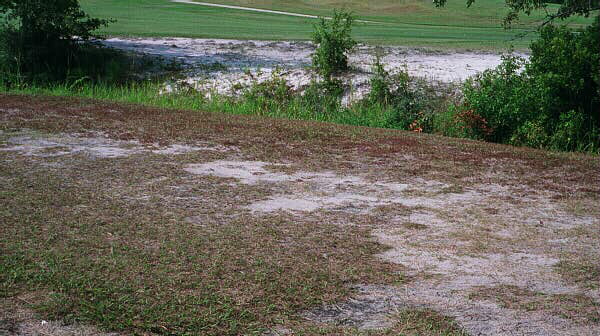 Too many private clubs would grass over this area between the 12th and 13th fairways.

Third, the bunkers don’t have a pampered, over-manicured appearance. They actually look like something that the golfer should avoid, which is again as it should be. 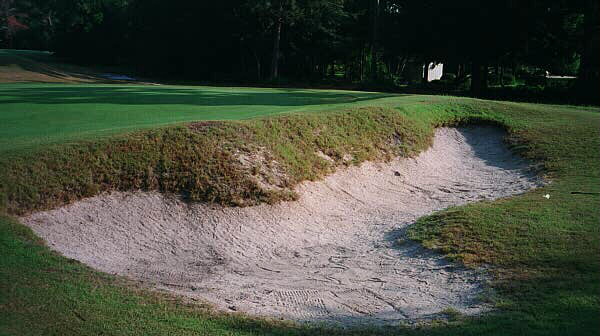 A perfect greenside bunker – its natural appearance makes it appear as if it has been there forever.

Fourth, ornamental trees have never been planted.What trees are present are indigenous pines that play no role in dictating the strategy of the holes – if only several hundred other Ross courses were so lucky!

When added together, golf at the Wilmington Golf Course comes as a breath of fresh air to the pampered, soft conditions that dominate golf in the United States. The course better mirrors the simplicity and naturalness of the golf in the United Kingdom, a great thing.

Third hole, 430 yards; Not surprisingly, the course’s most well known hole falls over the most dramatic piece of the property with the fairway landing area 30 feet below the tee before the hole twists up the right to a green that is higher than the tee. Holes such as this one help assure that the winner of the annual City Championship rarely scores better than a few under par over two rounds on this par 71 course. And though ‘resistance to scoring’ is not what this 6,560 yard course is about (having fun is), it is nonetheless impressive that this public facility keeps today’s best amateur golfers at bay, especially considering that only a couple of new tees have been added since Ross’s day.

Fourth hole, 185 yards; On the rare occasion, Ross would push up so much dirt as to make the green site look forboding. Similar to the sixth at Roaring Gap, this one shotter has earned the nickname Volcano by the locals. 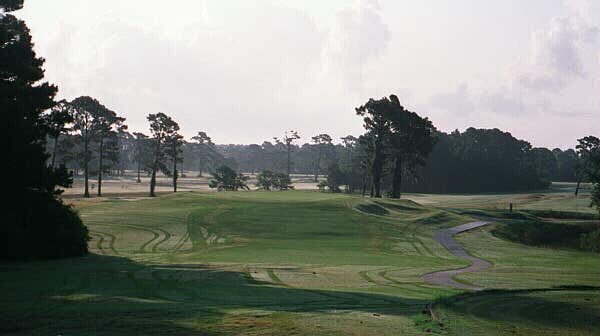 The Volcano one shot hole at Wilmington Golf Course.

Fifth hole, 360 yards; Nothing overtly complicated about the hole, nonetheless it shows the range in difficulty that the course can be set up. The green is open in front and with the hole location on the front or left portions, the daily player can expect a par. However, when the City Championship rolls around, the hole locations are invaraibly on the back and right side of the green. Many participants mistakenly fly their approach shot all the way onto the green only to see it take a couple of bounces and go over, from where a shot is likely to be dropped. 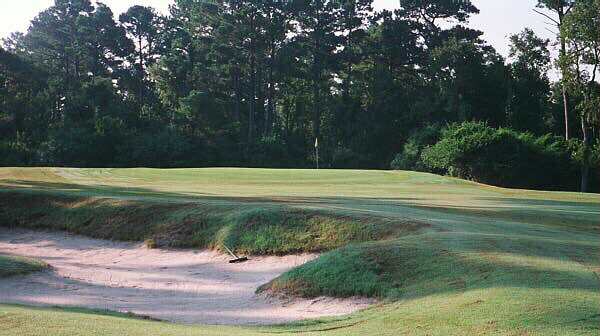 The 5th hole looks simple from here but given the firm playing conditions, the golfer doesn’t need to clear this bunker by much on his approach. Also… 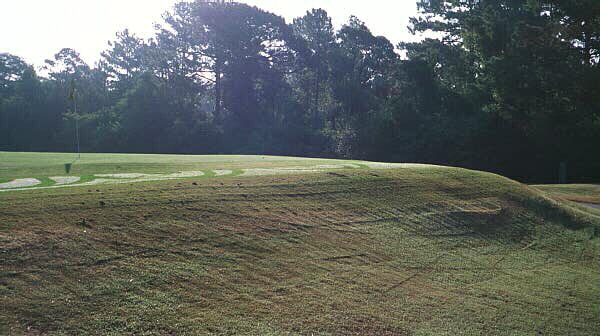 …right or long of the 6th green leaves a difficult recovery.

Seventh hole, 345 yards; Wilmington Golf Course benefits from gently rolling topography and in the case of the 7th hole, there is a bunker at the 230 yard mark that is invisible from the tee. While many a public golfer might cry ‘Foul!’ based on having a blind fairway bunker, it does make the hole. Plus, it shows that the powers behind the restoration project never wavered about reconstructing this bunker to its original depth. 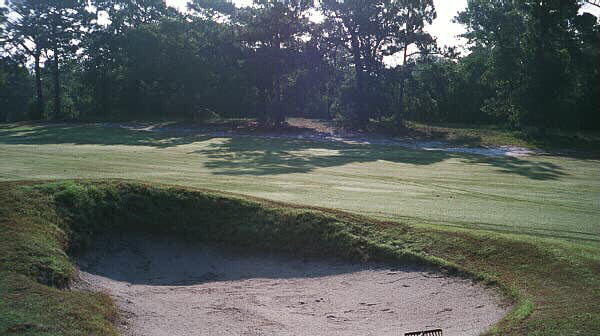 The tee ball on the 7th must fit between the bunker above and the sandy area on the far side of the fairway.

Eighth hole, 145 yards: Perhaps the prettiest hole on the course, this little beaut is tucked into a corner of the property. Four bunkers surround the green and make the green a hit or miss proposition, which is reasonable on a hole of this length. 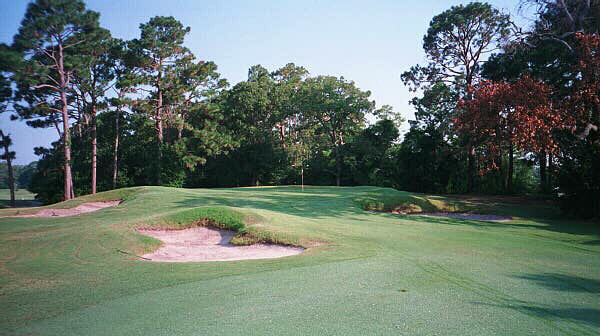 The forward bunker was faithfully restored and makes depth perception tricky at the 8th. 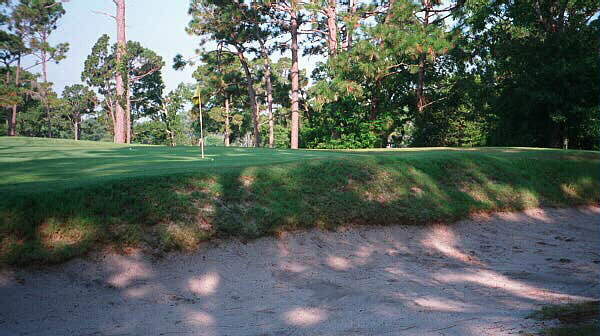 This four foot deep bunker stretches the length of the right side of the 8th green.

Tenth hole, 405 yards; Similar to the parallel 1st hole,a four foot ridge bisects the fairway at the 240 yard mark and many a tee ball dies into its slope. The approach must clear an array of diagonal bunkers (which are pictured at the start of this course profile).

Seventeenth hole, 350 yards; Sandwiched between the 240 yard 16th and the 430 yard eighteenth, the seventeenth may appear as welcome relief but a bogey is just as likely here if the golfer stops thinking for one minute. 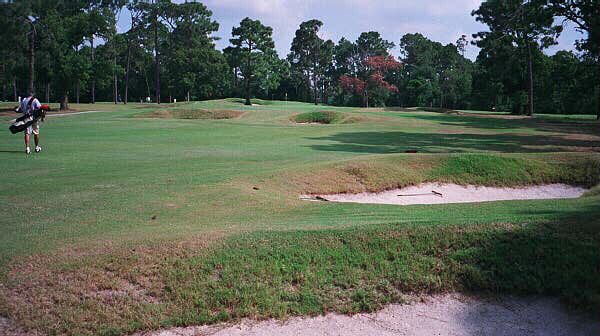 The ideal angle into the 17th green is protected by these two bunkers.

When Devane originally sent his Descriptive Plan of Action to the City, Prichard made sure that the plan was morecomplete in scope than just the bunker work that the City had approved. By doing so, Prichard hoped that perhaps the City would not look at the bunker project as all that was needed and that over time, the City may elect to do more.

While no work is being considered in the near immediate future, hopefully the City will consider expanding the greens back to their original size. Many have shrunk,and collectively the greens don’t possess as much short game interest as is normally associated with a Ross course (save for the grainy Bermuda greens, which require plenty of local knowledge). Several interesting hole locations could be perhaps re-introduced just by mowing further out on the green fill pad. 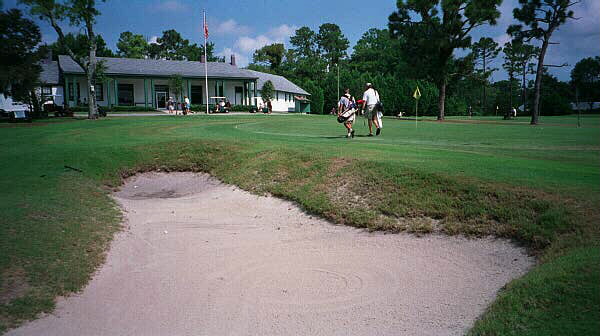 Though the mighty 18th hole provides a fitting finish, this picture is indicative of how the greens have shrunk in size and have pulled back from the greenside bunkering.

Regardless of whether additional restoration work is carried out, the muncipal golf course at Wilmington reminds the American golfer that good golf need not be expensive. The next time you receive your six hundred dollar monthly club bill, ask yourself how much of it is going to over-watering your course … or planting ornamental trees… or over maintaining the non-playing areas. Then, drive to Wilmington Golf Course, plop down the out-of-town fee of $14.00 for 18 holes, and go have fun playing golf the way it is meant to be.