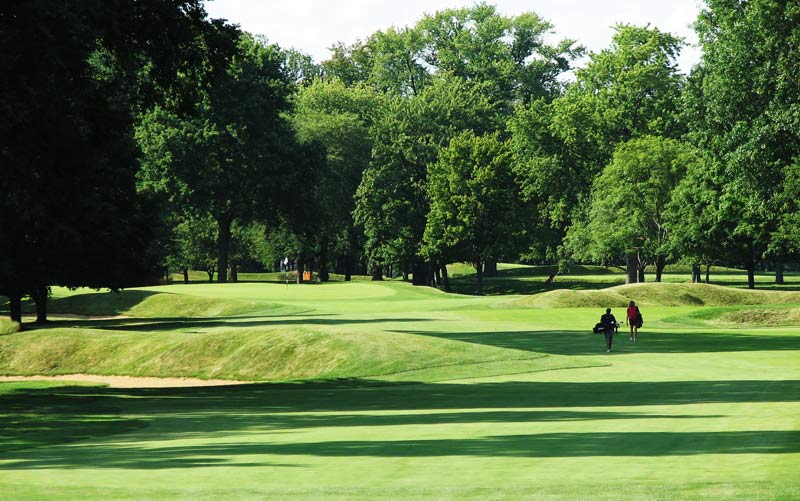 Ron Prichard’s 1999 restorative work returned both the challenge and distinctive character to Skokie.

Such is the timeless charm and appeal that Skokie possesses today that onewould imagine that littleever happened tothe coursesince its original inception. And yet, nothing could be further from the truth!

The first version of the coursewas built by the membersjust before the turn of the 20th century and was a nine hole course. Tom Bendelowexpanded and modified the courseto eighteen holes in 1905. Donald Ross’s 1914 revision ofBendelow’scourse became thethird version and was deemed good enough to host the 1922 U.S. Open, won by Gene Sarazen.

Fourteeen years later as Europe plunged into World War II, the club gave up several Ross holes when it soldto a real estate venture the land around the presentfifteenth andsixteenth holes. In the process,it picked up additional land south of its existing border. Rather than go back to Ross, Skokie hired the local architect firm of William Langford and Ted Moreau to design the holeson the newly acquired property. Thus,thepresent third, fourth, fifth, sixth, eleventh, twelfth, andthirteenth holes were created withLangford/Moreau tying the remaining Ross holes into these sevennew ones.

WhetherRoss’s 1922 courseorLangford/Moreau’s1938 versionwas the designzenithof Skokie is a matter of conjecture but the author sides with the 1938 one. The introduction of the stream and lake at the south end of the property was adistinctplus asthe resultingthird, eleventh, andtwelfth holes add variety to the overall challenge and are undoubtedly among the finest on the course. Plus, Langford/Moreau’s exaggerated bunker walls are a handsomeadditionto the subdued topography.

Unfortunately, from WWII until the mid 1990s, anumber of lesser architects tinkered with the course to the point where neither Rossnor Langford/Moreau wouldlikelyhave recognized it: cross bunkerswere removed, other bunkerswere softened and became maintenance nightmares thanks to their high sandy faces which werein voguein the 1970s, moundswere added for ‘framing’, and the putting surfaces shrunk to where many greens were bland ovals.In addition, tree encroachment continued unabated, thus negating many ofthe playing angles within the holes. With the most interesting hole locations gone and the strategic requirements reduced, the course was a shadow of its formerglorious state.

The Green Committeeconcisely outlined theseconcerns in 1999 to the membership in a very well produced six page fold-out brochure entilted Course Restoration Plan.A full color aerial rendering of the course was included by Ron Prichard that showed the course’s features before and after the proposed restorative work. Also, several of the most potentially contentous issues wereaddressed head on, such as tree removal, how long the course would be closed and how much it would cost.

In addition, the Green Committee made it clear to the membership that there would be no cherry picking of Prichard’s ideas: the plan would be accepted in its entirety or not at all. As they wisely noted, ‘ It is best to stick with plans drawn by an experienced professional. No matter how good the intention, modifications made by amateur hands tend to produce unsatisfactory results.’

Oncepresented with the facts, the membership voted to pursue restoring the course in a comprehensive manner as outlined by Prichard.Working closely with Green Keeper Don Cross and his crew, Prichard’s work came in on time and on budget. The result is a startingly transformationthat returned the coursetoa centerpiece of classic design.

While every phase of the project was a complete success, Prichard’s fairway bunker workis especially noteworthy. Here-introduced cross bunkers, herotated the axis of numerous fairway bunkers 90 degrees so that the bunkers once again protrude into play as opposed to just paralleling the fairway, and he gave hands on attention to ensuring the grass bunker walls hadirregular shape and flow to them. 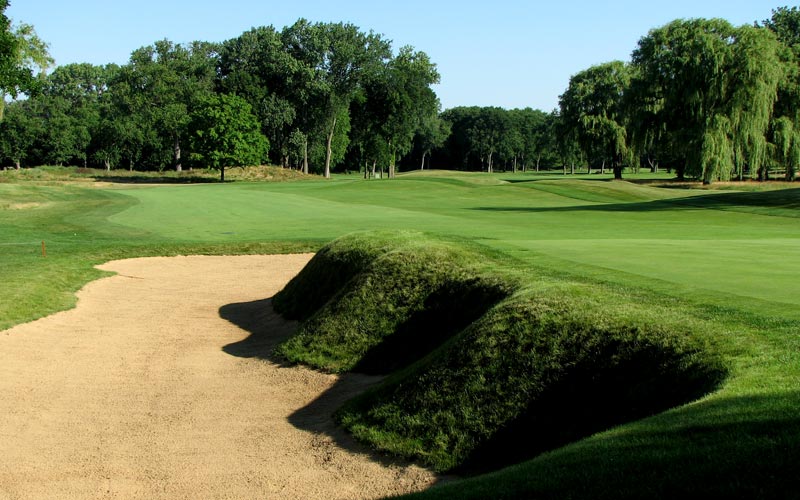 Langford and Moreau’s work is often compared to that of Seth Raynor, a compliment to all parties concerned. However, one difference is the pronounced rolling faces that Langford often used with his bunkers. Above is the greenside bunker as seen from behind the third hole, with its face recaptured by Ron Prichard. 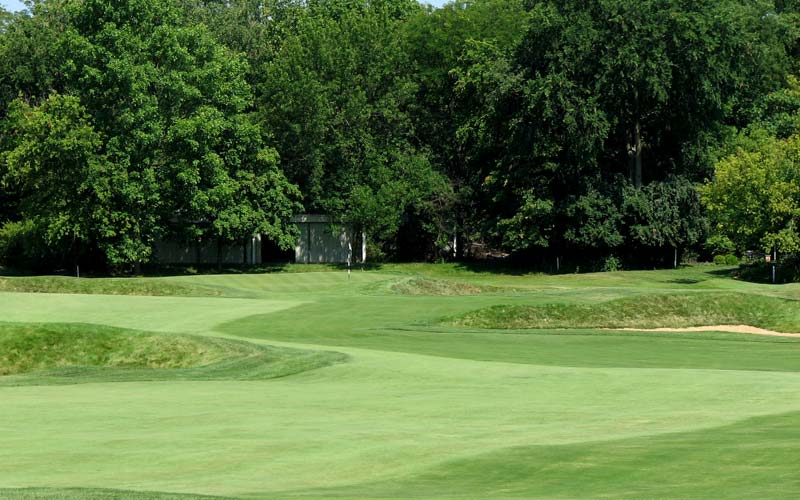 Here at the sixth, the golfer must first carry two restored fairway bunkers on the left while staying short of one on the right. The right fairway bunker was brought into the fairway by turning it ninety degrees and it protects the ideal approach angle. 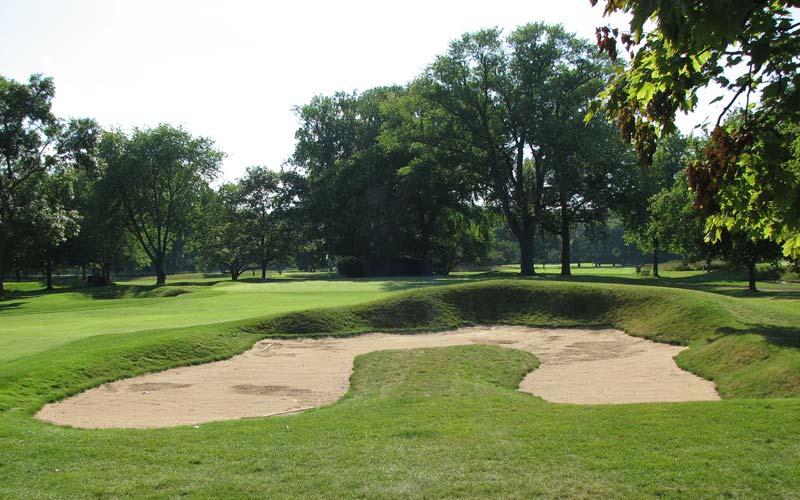 Skokie is a walker’s paradise with greens and tees in close proximity to one another. With few trees as protection, Ross steered the golfers away from the players in front by the use of bunkers. The horseshoe bunker above fronts the eighth tee and those golfers playing the seventh do well to stay clear of it.

With conversation tending to center around Skokie’s distinctive bunkering and interesting green contours (e.g. thesixth and eleventh), overlooked can be the fact thatSkokie also possesses length. With the course having expanded nearly 1,000 yards since Bendelow’s effort, the Championship Card showsa course that measures 7,020 yards against a par of 71. Indeed, its three hole finish of 250 yards, 445 yards and 465 yards isas demanding a stretch as one would ever wish to find.

Still, length for length’s sake is boring but it is important that Skokie possess it. Why? Without it, the cross bunkers which add so much to the course would be meaningless. Afterall, cross bunkers 40 yards shy of a 360 yard hole or 100 yards shy of a 500 yard hole only trap the duffer in this modern age of aerial golf. However, those same bunkers on a 440 yarderand a560 yarderremain in play for all levelsof golfers. Thus, though many courses claim to do so, Skokie accurately enjoys thereputationfor providing an engagingchallenge toall levels of players.

First hole, 440 yards; Hard to imagine a more appealing opener. From the elevated tee 20-25 feet above the fairway, the golfer is afforded a clear view down the broad fairway, which he’ll want to hit as carrying the restored cross bunkers fifty yards shy of the green can be difficult from the rough. Of course, when Ross first built these cross bunkers, the golfer would have been trying to just carrythemwith a spoon, in hopes of watching his ball bound along the groundfor forty yards and onto the green. Nonetheless, these cross bunkers remain much in play for the modern game for all but a well placedtee ball. 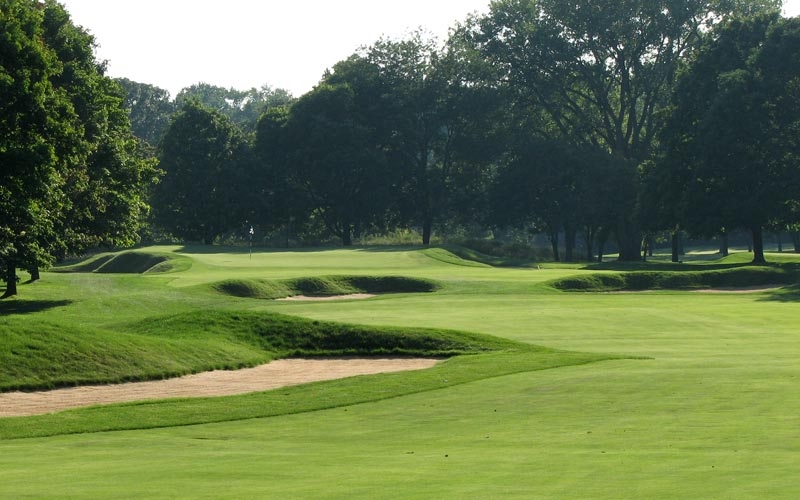 With trees removed from the playing corridor and the cross bunkers restored, the first at Skokie has returned as one of the game’s grand openers.

Thirdhole, 570 yards; The three par fives on the Championship Course are notable for the pressure that they apply on thesecond shot. An impressive array of bunkers must becontended with if the golfer hopes to have a wedge in his hands for his third shot. Importantly, Prichard expanded and recontoured the fairway just past these bunkers to give the golferplenty ofincentive for risking the carry. 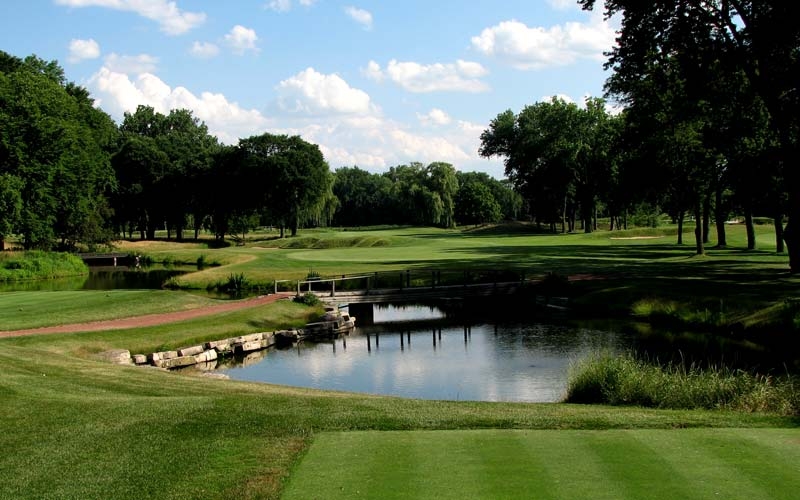 The view from the third tee shows the hole’s dominate defenses: cross bunkers and a stream. 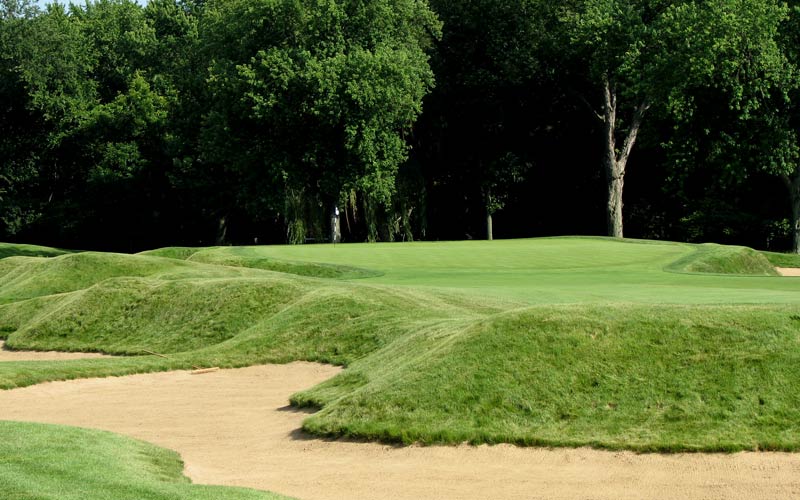 Fourthhole, 440 yards; Skokie occupies 160 acres of land which isn’t big by today’s standards. Nonetheless, Ross and then Langford/Moreau created numerous interesting playing angles by their imaginativeplacement of bunkers.At the fourth,Prichard turned a right fairway bunker back into the fairway. When combined with the six foot deep left greenside bunkerand another one thirty yards from the green, the golfer appreciates the hole’s strategicflair, unusualfor astraight hole. 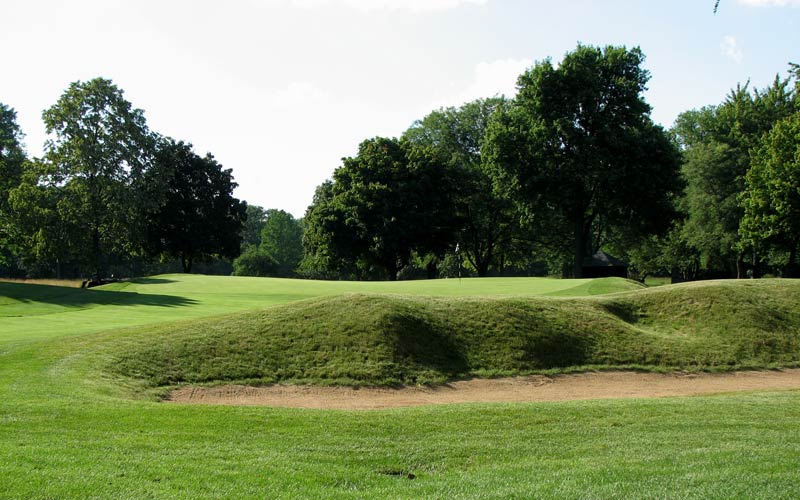 Langford and Moreau’s attractive bunkering is again evident here at the restored bunker thirty yards shy of the fourth green. However, it’s more than just about style. The height of the bunker wall appears fearsome, steering golfers left, where one of the course’s deepest greenside bunkers lies in wait. 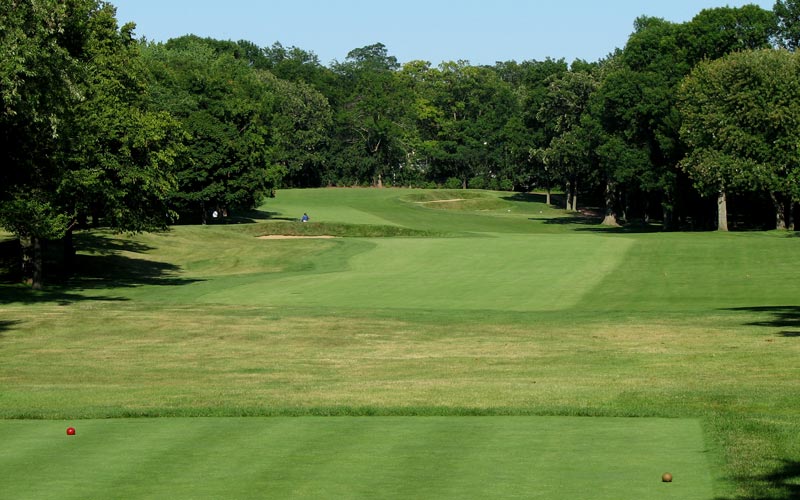 This view down the long eighth shows the hole ending with its green atop a hillock. Consistent with such a location, the green is blisteringly quick from back to front. 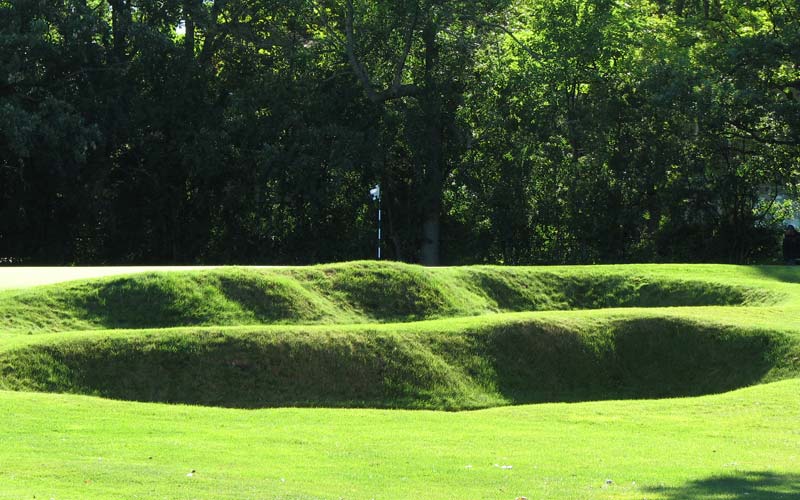 Ross cut unique double bunkers into the hillside upon which the eighth green sits. So swift is the green from back to front, a ball in the top bunker may actually be preferable to one above the hole at the back edge of the green.

Tenthhole, 410 yards; Originally thefirst hole on Ross’s course, Langford/Moreau switchedRoss’sfirst andtenth holes in 1938. The two holes sharemany of the same appealing attributes:aninspiring view from the elevated tee, the approach bunkers shy of the green,and abuilt-up green pad, bunkered both right and left. In the case of thetenth hole, the approach bunkers areoff setfrom one another, which creates added depth perception problems. 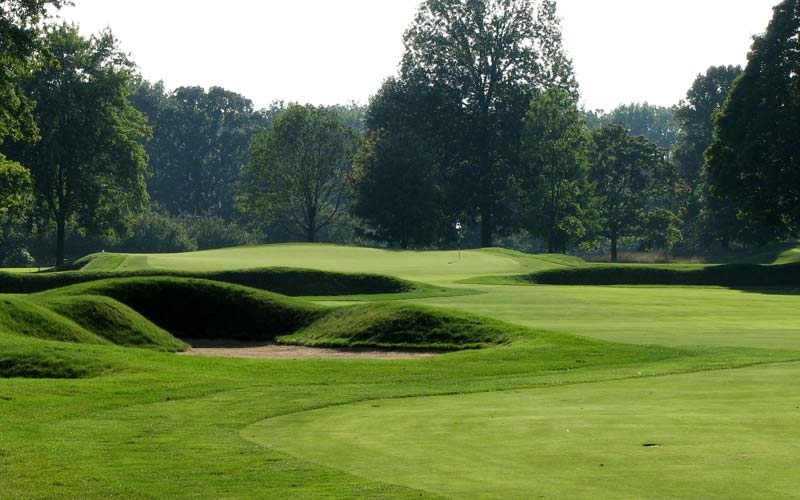 Even from well back in the fairway, the back hump in the geen is evident. Prichard recaptured several feet along the green’s back edge, allowing the hump to once again be used to funnel balls toward certain hole locations.

Eleventhhole, 560 yards; This beautifully conceivedhole is but another example of why Langford/Moreau deserve far more recognition than perhaps they have received to date. Vaguely in a soft’S’ shape, the eleventhrequires the golfer going for the green to shape the ball both ways. By re-positioning the fairway and adding a left fairway bunker, Prichard asks for adraw off the tee. Byhaving a third cross bunker extend into the fairway from the right hand side of the rough at the 130 mark from the green, Prichard asks for afade to get close tothe green.The need to shapea ball both ways on the same hole is a sure way to identify the better player. 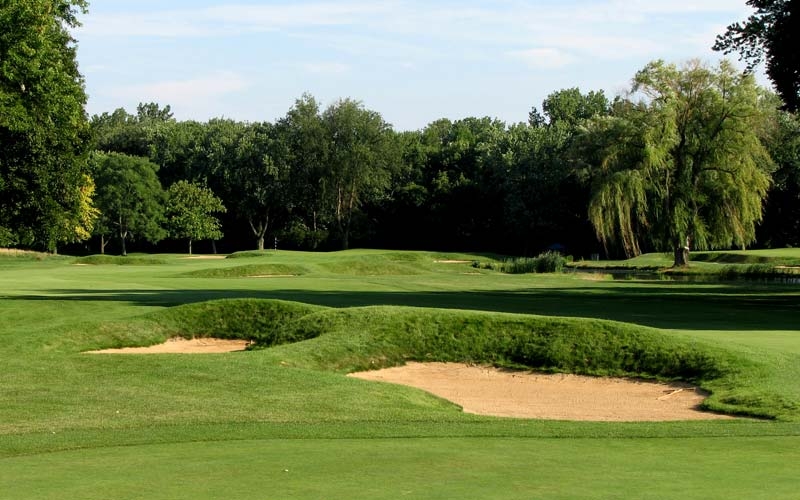 Rare for a parkland course, the bunkers at Skokie protrude into the fairways and create all sorts of interesting playing angles.

Twelfthhole, 230 yards; The most memorable one shotter on the courseisconfiguredlike thesixteenth at Cypress Point. The direct route is all carry over water withLangford/Moreau providing a bailout fairway along the left of the water hazard. Asnerve-racking as the hole is today, it was this length in 1938! 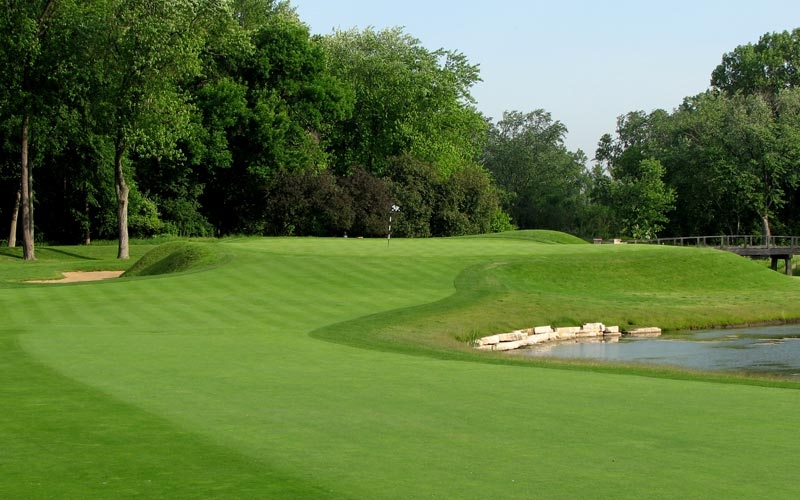 Rather than attempt the direct, all carry route over water, many golfers lay up left of the twelfth green ala the sensible way to play the sixteenth at Cypress Point.

Fifteenthhole, 350 yards; A short two shotter like the ones found at Roaring Gap and Essex County add lots of fun toward the end ofa roundand Langford/Moreau should be commended for incorporating this hole so well into Skokie’s final stretch. Originally thetwelfth on Ross’s course, Prichard reconstructed three fairway bunkers, all with particularly high grassbanks.A back right hole locationdictates placing thetee balllong down the left side, which is exactly where the last of the three bunkers is located. The brute one shot 250 yardsixteenth makes for a perfect compliment to this three wood/wedge hole. 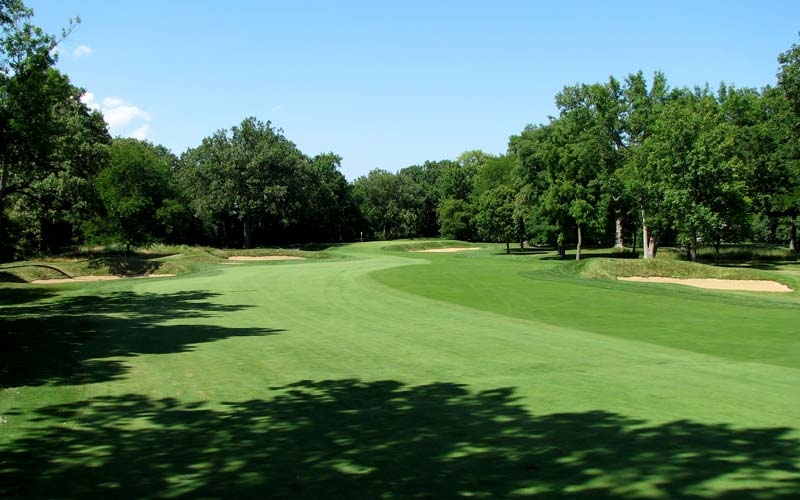 The fifteenth fairway gets progressively narrow – just how aggressive one should be off the tee is a matter oft debated.

Two years after Prichard’s work was completed, the course continues to improve. The re-newed appreciation for classic architecture by its members has helped Don Cross turn off the water and move away from a green, heavily tree-lined parkland course. Once again, the fairways are playing faster and firmer and the player needs toplot his way around the course to avoid the many hazards. In addition, as moretrees are selectively felled, the wind off nearby Lake Michigan is allowed to play a bigger role.

Starting with the member’s support and commitment for a full restorative effort, followed by Prichard’s hands-on detailed work,followed by Don Cross’s playing conditions,Skokie Country Clubhas returned as a beacon of classical architecture. Any club considering such work to their course would do itself well by sending their board members to study the work done – and being done – at Skokie Country Club as they will gain a clear understandingof how to do it right.