Best of Golf: The Fifth at Pinehurst No. 2

Best of Golf: The Fifth at Pinehurst No. 2

The Best of Golf: The Fifth at 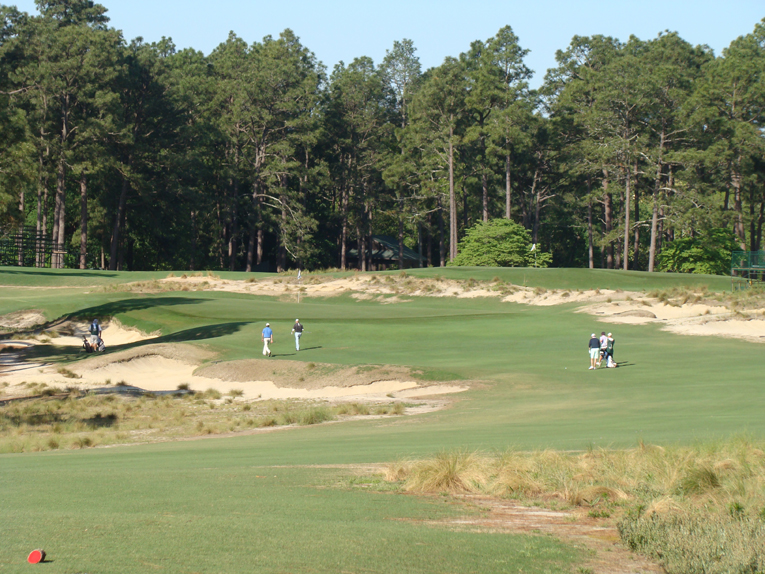 Golf in the Sandhills of North Carolina is epitomized by the fifth hole at Pinehurst No. 2. The tiger will struggle to get his desired score while the less accomplished golfer can bumble along the wide fairway without fear of losing a ball.

The notion of par is helpful for handicapping purposes and for determining where players are versus one another on a scoreboard. Otherwise, par is largely meaningless. Under any format in golf – stroke, match, Stableford, name it – the object is to get the ball in the hole in the fewest strokes possible.

Nonetheless, when USGA Executive Director Mike Davis announced that par would be reversed on the fourth and fifth holes at Pinehurst No. 2 for the playing of the 2014 Opens there was much gnashing of teeth.  After all, the fifth is one of the golf’s iconic holes and has achieved fame as a brutal two-shotter since the 1951 Ryder Cup. It played as one of the top three most difficult holes on the course in every major event since, including the 1999 and 2005 US Opens.

In the immediate rush to question the wisdom of Davis’s decision, a simple fact was overlooked: it was a par 5, 467 yarder in the 1936 PGA Championship when Donald Ross ruled over the courses at Pinehurst. That’s right: A PAR 5. Here is how Ross described the second shot at the fifth in the 1936 program:

The competitor who has elected to play on the left side of the fairway has the opportunity of slapping a boldly played, high carrying iron directly on the pin but certain trouble awaits him to the right, left or short if he fails to properly execute this type of shot. The player on the right has a somewhat longer second and the slope of the green being more away from him, he is therefore likely to undertake an iron shot with a lower trajectory.  The curl of the green to the left will, however, certainly bring him to grief unless he places his shot with fine accuracy or unless he plays with a slight fade to the right.

Ross passed away three years prior to the play of the 1951 Ryder Cup when the fifth hole first played as a two shot hole from 445 yards. We don’t know what he would have thought about such an exacting two shotter, especially when it was followed by one of his most cruel one shot holes.

What really matters is that played from any tee, the fifth is a 4 ½ par hole of alarming excellence. Pinehurst’s best features are all exhibited – wide fairway, playing angles, diagonal green that sheds balls in all directions with short grass on one side and a fierce hazard on the other. Add in the sloping fairway lies and this hole becomes a stand-out not only at No. 2 but within the other 7,000 plus holes that Ross designed.

Like most great courses, Pinehurst No. 2 evolved over several decades and it did so under Ross’s unifying vision.  He started work on it in 1901 and it wasn’t until the 1930s that two major components were finally incorporated. At the time, golfers on No. 2 holed out at the third and then played today’s sixth. In 1934 the land that today’s fourth and fifth holes occupy become part of the routing of Pinehurst No. 2. Previously, these holes were the first and ninth holes of the Employee Course (also called Pinehurst No. 5 at the time). With the effects of the Great Depression still evident, the Employee Course was abandoned but these two holes were folded into the No.2 course.

The most interesting topography at No. 2 is found within the valley in which these holes are located. In particular, the land movement over the last 300 yards of the fifth hole is exceptional. Ross magnificently turned the hole left 100 yards short of the green by following the high right to low left grade of the land and then benched the green complex into a hillside. While the hole rests peacefully upon the land, it enjoys a pedigree reserved for holes that are supremely routed.

Shortly thereafter, another milestone occurred – the conversion of Pinehurst’s sand greens to grass.  As we all know, this took on a particularly wicked significance at Pinehurst No. 2 because the greens became one of Ross’s crowning (no pun intended!) design achievements. As a reachable par 5, Ross clearly defended par at the green on the fifth, featuring a 13 yard long false front and a false left side of nearly the same length. There are fewer hole locations on this hog back green than any of its brethren at Pinehurst.

Let’s examine the hole tee to green. For both the tiger playing it from 580 or the 7 handicap playing it from 505 yards, the challenge off the tee is similar: Carry right of the bunker that Ross cut into crest of the hill and the tee ball will scoot down the 70 yard long broad slope beyond the hillcrest. 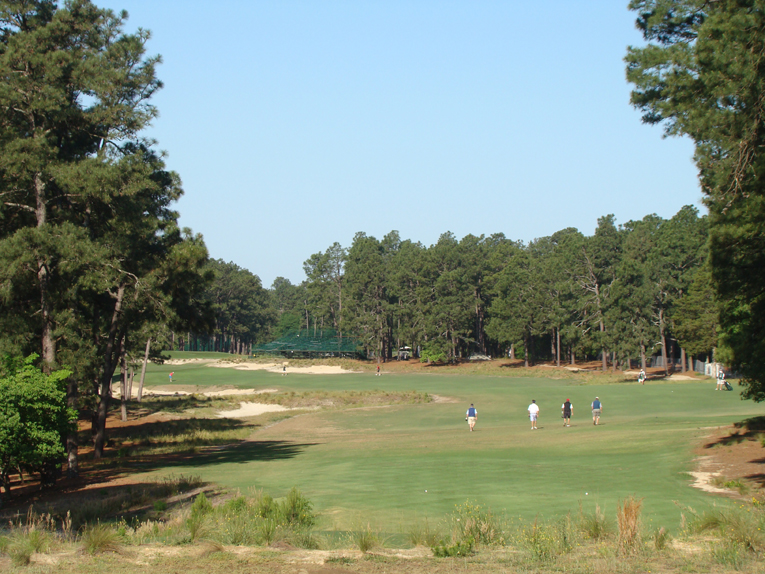 Step One is to slot the drive between the bunker/depression that juts into the fairway from the left and the sandy floor along the right. 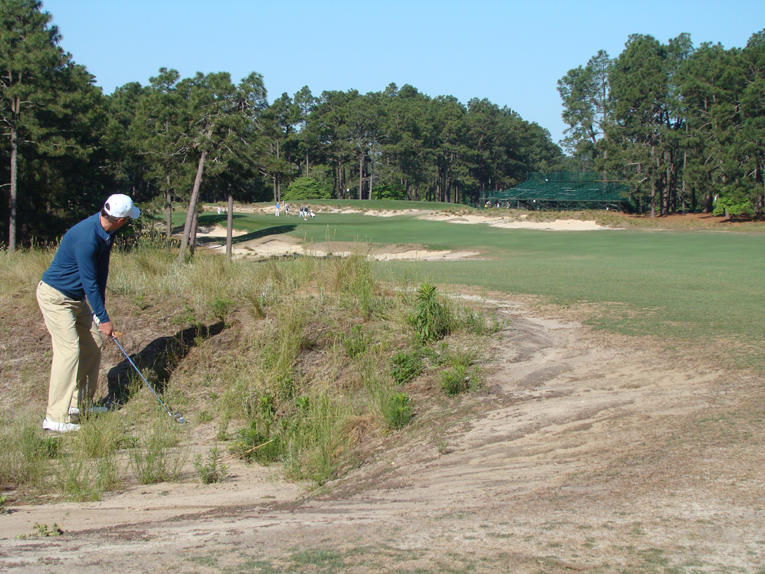 Sadly, this golfer is tangled up in Ross’s depression and a pitch-out is his only option. 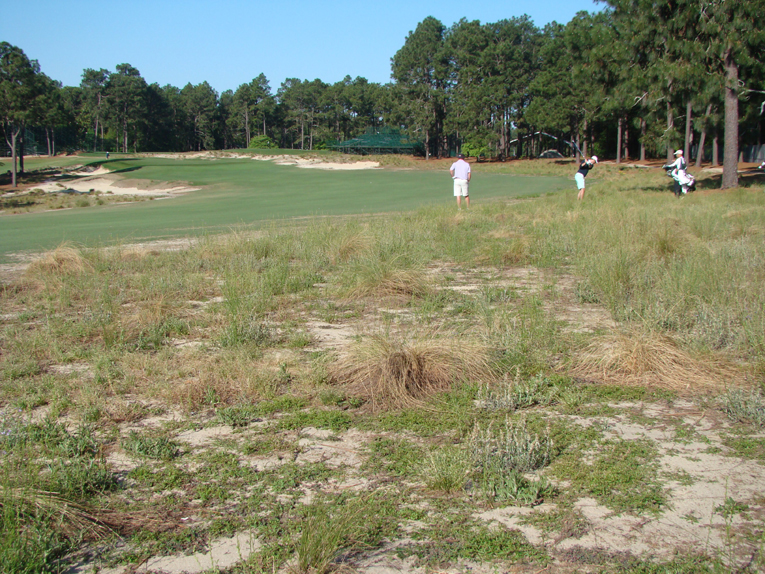 Drives pushed right are subject to all sorts of lies, some worse than others.

After a well struck/placed drive, the golfer is left with a thrilling dilemma: Does he heroically flight a wood left over the sandy floor in an effort to reach the green in two, attempt a draw which can chase up the ground to the green or lay up short and over to the right? 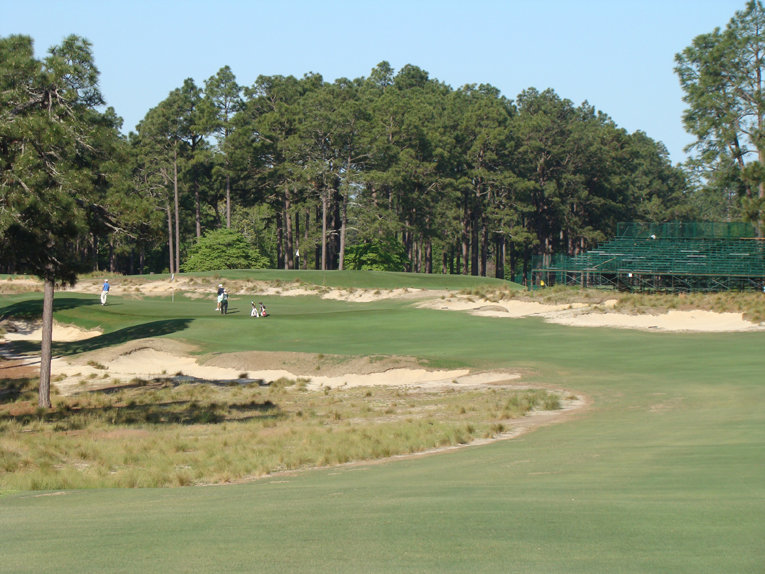 From a slightly hanging lie, does the golfer dare make the attempt over the sandy floor in hopes of reaching the putting surface in two blows? He will remember the shot for years and years if he pulls it off.

If laying-up, where exactly? Ideally, one’s second should get within thirty yards or so of the green, leaving a pitch and run. However, that requires a very well placed second, slotted between bunkers low left and high right.  Laying back farther takes some of the difficulty away from the second but significantly complicates the approach. 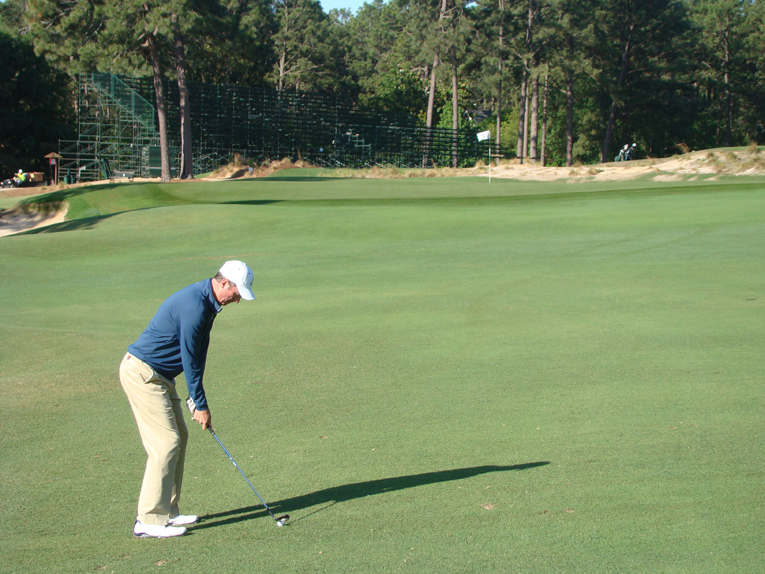 Look at the situation facing this golfer who is seventy yards from the hole. The ball is just enough above this right handed golfer’s feet to promote a pull or perhaps induce a little right to left spin. With sincere pain looming left, this pitch is no bargain. 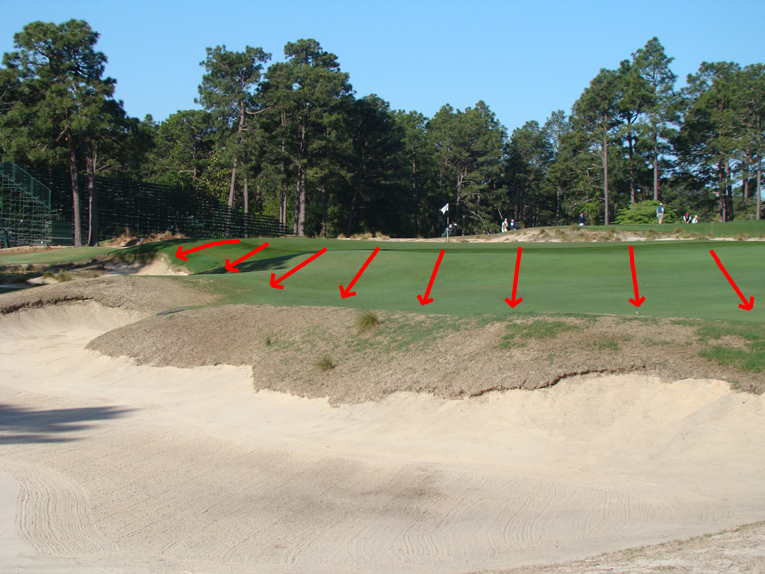 Just a shade weak and gravity takes over, sending many a ball in reverse and back off the putting surface, sometimes well away from the green. 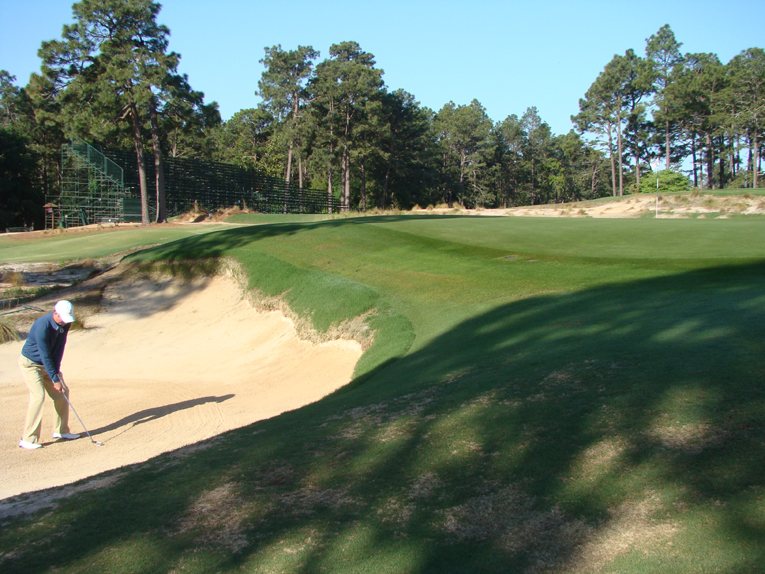 Though deep, the front left bunker affords the golfer the chance of hitting a controlled recovery shot with spin to the crowned green. His splash shot needs to carry a good thirteen paces on the putting surface or the green contours repel the ball sending it back into the very same bunker. The horror of a ball returning to one’s feet makes No.2 such a nerve jangling course to play in a 72 stroke event.

Coore & Crenshaw’s masterful restoration of Pinehurst No. 2 has been extensively documented. It was so sweeping and all encompassing that focusing on a single 400 square foot area might appear trivial. Yet, the reclamation of the sandy floor beyond the fifth’s left front greenside bunker is particularly noteworthy, especially because it’s positioned on the low side of a long hole (i.e. an area that receives many visitors).  The floor was paved with Bermuda grass in the prior two US Opens. The sticky turf kept balls from wandering very far and enabled the professionals to slide their 60 degree wedges under the Bermuda grass and pop the ball onto the putting surface. As seen below, there is no maintained grass now. Instead, areas like this dole out any number of awkward stances and lies. Even a clean lie and level stance leave the golfer with the conundrum of what club to hit off the hardpan.  A club with too much bounce won’t do and a hooded iron into the slope takes bravado. 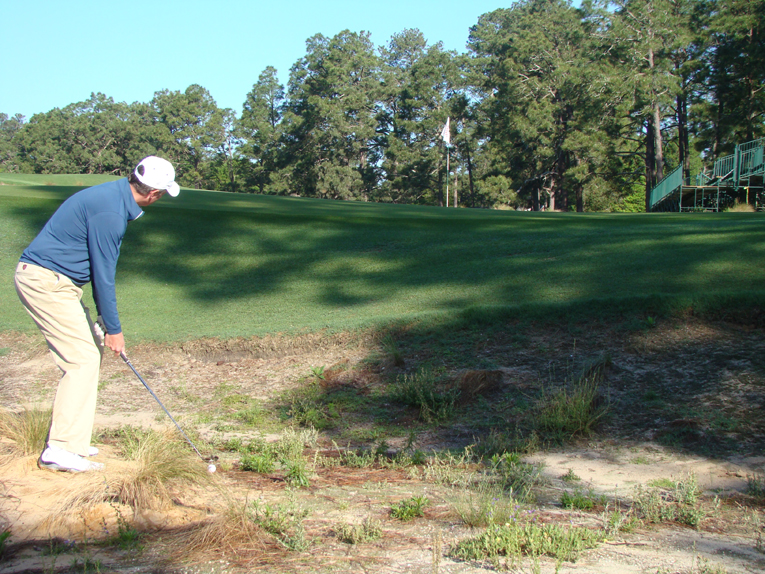 The tension generated by the need to scale the slope and yet not go too far onto the putting surface is maxed-out along the front and left side of the fifth. 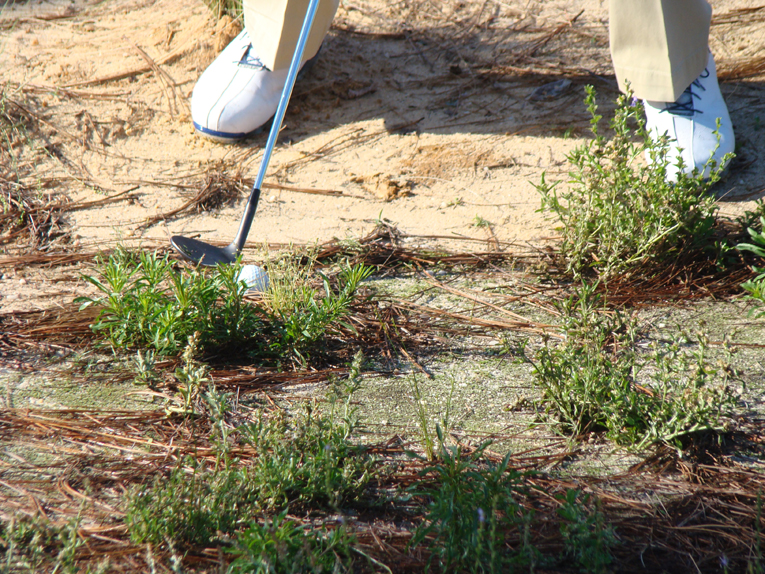 What to do? How to play it?

The diabolical slopes of the fifth green are known worldwide. Here is how the green is described within the GolfClubAtlas.com course profile of Pinehurst No. 2:

Nothing within seven paces of the perimeter of the green allows for a cup, such is the manner in which this green slopes away on all sides. The statistics on this green are fascinating as it only features 1,976 square feet of putting surface with a slope less than 3%. Another 896 square feet of green is between 3% and 4% and might be cup-able under certain (i.e. non-U.S. Open) conditions. The remaining 2,925 square feet of the green features slopes greater than 4%. From well back in the fairway, the target area is minuscule at ~2,900 square feet. While it is rare to find a hole this difficult without water, this most challenging approach is mitigated by the reinstated firm conditions which allow for a run up.

The green complex provides the perfect defense for a ½ par three shot hole. As the target for a long two-shotter, this green could be deemed too severe as it only permits hole locations on approximately 35% of its square footage. Though waterless, the fifth green complex challenges along the same degree of difficulty as the eleventh at Augusta National. Misses short left or left lead to stress and high scores whereas long right leaves a ticklish recovery but one that can be accomplished. Flag hunting left hole locations at either green is fool hardy. 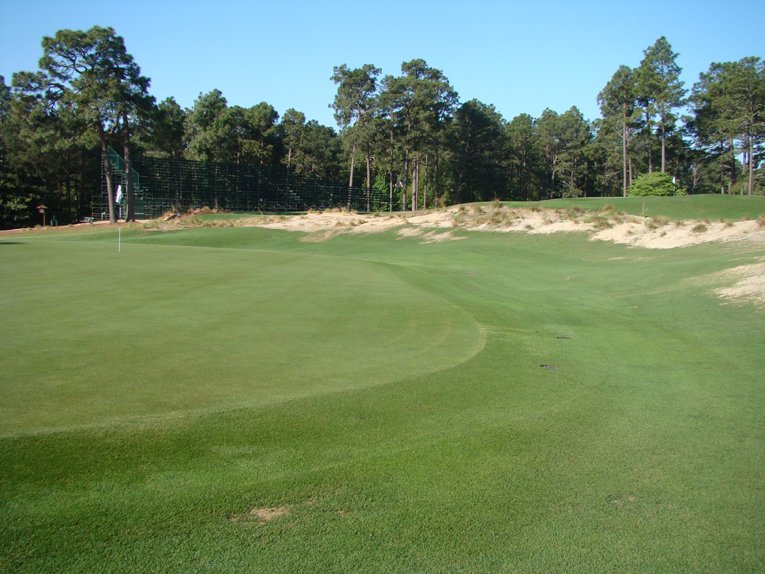 Shots played long and right of the fifth green leave contestants with a chance of recovery but only with a deft chips and putts. This area right of the green should be considered the golfer’s friend.

The fifth is a great hole in American golf, regardless of its par. Played anywhere from 440 to 580 yards it is a superb 1/2 par hole. Shifts in fortune occur readily, making it dynamic. No event will ever be won or lost here because it falls so early in the round. Yet, that takes nothing away from its importance in shaping the golfer’s mindset (and therefore performance) for most of the round.

The benefits of playing it as a par 5 are several: First, Ross’s bunker and depression are brought back into play off the tee. Second, the area from 110 to 40 yards short of the green will see much more play and that’s a good thing given how interesting that land is in. Third, the diabolical green is a far more interesting target for a 70-80 yard pitch and is so much more challenging than the fourth green from the same distance. Finally, restoring  par to the fifth hole didn’t occur in a vacuum as the fourth hole was changed from a par 5 to a par 4. The fourth as a long two shotter is  more compelling than the fourth as a par 5.

All told, Mike Davis and the USGA made a wise decision in re-establishing the fifth as a three shot hole. A dilemma befalls the Pinehurst Resort and how they will treat the hole going forward. It’s the kind of problem any resort should love.