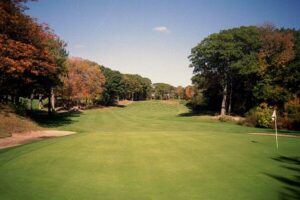 The view from behind the 14th green highlights the beautiful New England setting that Tedesco Country Club enjoys.

Tedesco Country Club in Marblehead, MA was designed in the 1920’s by Skip Wogan, father of Phil Wogan. It is situated on the North Shore area of Boston, and its players annually play a Ryder Cup-style match against rival Salem Country Club. It is named for the bark Tedesco, a ship that broke up along the rocks of nearby Swampscott in the early nineteenth century. The club opened in 1903, but not in its current location. Six holes were staked out along the rocky shore of Phillip’s Beach in Swampscott, but those who viewed the grounds as potentially lucrative real estate soon bought out the golfers. The club was then moved to its current site, straddling Salem St., where parts of the course lay in Swampscott and Marblehead.

The course plays at about 6500 yards from the tips to a stern par of 70, and has hosted many tournaments, mostly for the Massachusetts Golf Association. Most recently held at the club have been the 1993 Massachusetts Open (a tournament that returns for the centennial in 2003), the Mass. Senior Amateur in 1998, and numerous MGA amateur qualifying rounds.

The course is routed like many other New England tracks, with the majority of the front nine routed over former pastureland, and most of the back nine routed through a thick forest. The front nine, relatively flat in nature, plays to a par of 34, while the back nine, much hillier, plays to a par of 36. The back nine is obviously much more difficult than the front, as it often plays more difficult than the two shots afforded by the nine’s par.

Tedesco’s main defense from the long hitters of today is the lightning-fast greens that magnify every contour on each surface, as they are well known throughout the area. Architectural oddities include the two back-to-back par 3s on the front nine, and the fact that the only two par 5s come back-to-back at 9 and 10. The course is also well-known for its tough finish, as hole 15 is the narrowest on the course at 385, and 16, 17, and 18 are all par 4s that play to 440, 430, and 450 respectively.

Hole 1, 430 yards. This hole gets the player off to a difficult start from a well-elevated clubhouse-patio tee, even though the fairway is quite wide. The main feature is the wide swale in front that puts the brakes on many an approach, even though the play to this false-fronted green is to run a long-iron onto the green. 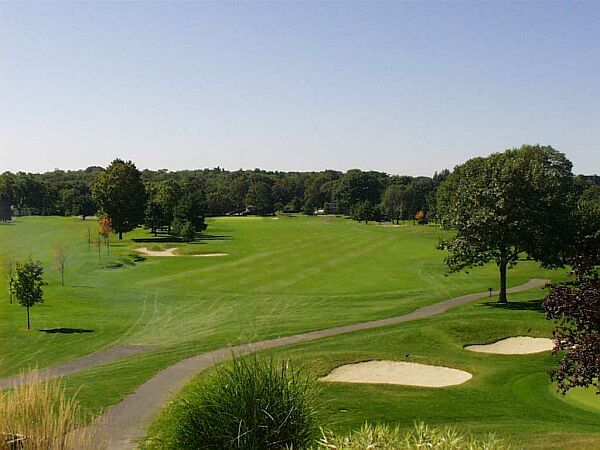 Hole 2, 380 yards: This medium-length par 4 plays to a green in a rock cavern just below the clubhouse and first tee. A berm in front obscures the green, and the wide surface allow the some left pin placements to be almost totally blind among the semi-circular rock wall.

Hole 4, 430 yards: This hole plays to another wide fairway, but fairway cross bunkers can cause the player who finds himself in the trees to the right of the hole to lay up in front of them. The green is one of the more severe on the course, as it slopes severely from back to front. This is another hole that the run-up play is often the right choice. 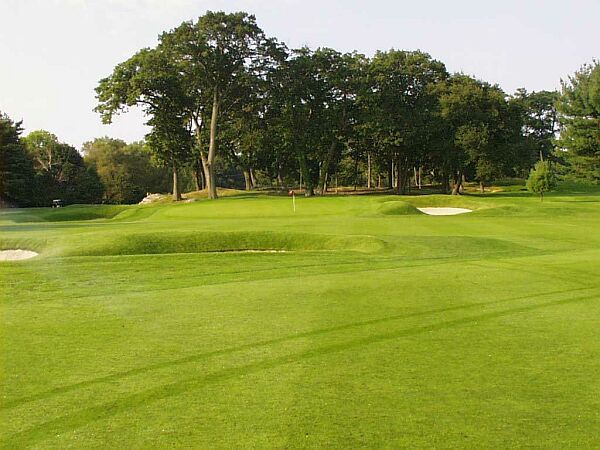 The approach to the 4th green shows the new bunkers.

Hole 6, 277 yards: This is a wonderful short par 4 that begs for the long hitter to go for the green. Although the hole is short, a miss with a driver can mean a 7 is in the cards. The fairway, usually played to with a mid- to long-iron is wide but blind over a small mound. The green is the most sloped on the course, as there are several pin positions that create completely different placements from the short wedge shot.

Hole 7, 239 yards: This hole, first of back-to-back par 3s is the longest on the course, and plays to one of the smallest greens, surrounded by bunkers. The hole plays from a well-elevated tee and requires a high-fading wood or long-iron that runs up the front of the push-up green.

Hole 8, 135 yards: This short par 3 also plays to a sloping back-to-front green with bunkers on all four sides. Past the pin is pretty much dead here.

Hole 9, 495 yards: This par five is not really reachable, but can sometimes be in range when downwind. The main challenges are fairway bunkers that pinch the landing area to 10 yards wide at about 270, and the two-tiered green that lies on top of a hill, about 50 feet above the fairway. 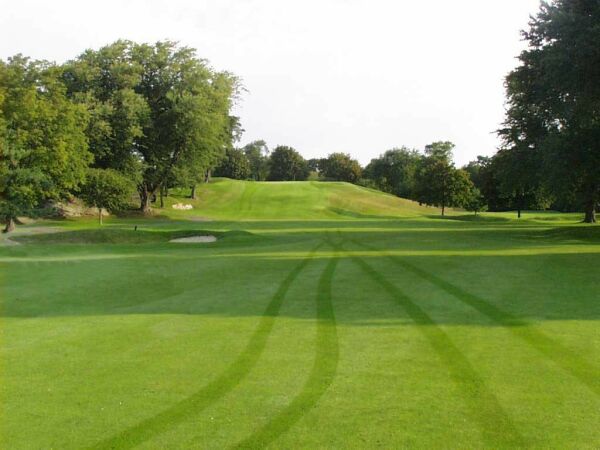 Hole 12, 370 yards: This is the most interesting hole on the course, a par 4 that plays to a table-like fairway, then a table-like green. This is the single hole on the course that Donald Ross designed. Legend has it that the hole was originally designed to play from right of the 11th green, not today’s tee from the left, as it would have faced the hill in the fairway straight on, as opposed to an angle like it does today. If the hill is cleared, the approach is uphill to a shelf green about 70 feet above the fairway. If not, the shot is from an uphill lie with a mid- or long-iron to a small shallow green 100 feet above the player. 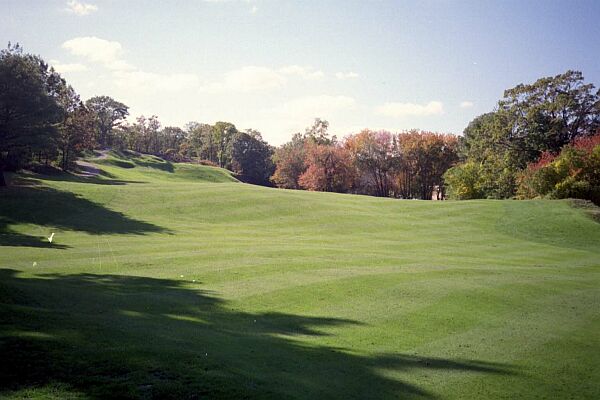 The green at the 12th is on top of the hill at the upper left of the picture.

Hole 15, 385 yards: This is the narrowest hole on the course, as it plays through a chute in the trees to a fairway with two crests and two valleys before reaching the elevated green. The slope between the two crests shoots tee balls to the right, and this slope used to be a rock outcropping that demanded a right-or-left decision off the tee. The green is well-sloped from back-to-front, as any approach above the pin faces a tough two putt. 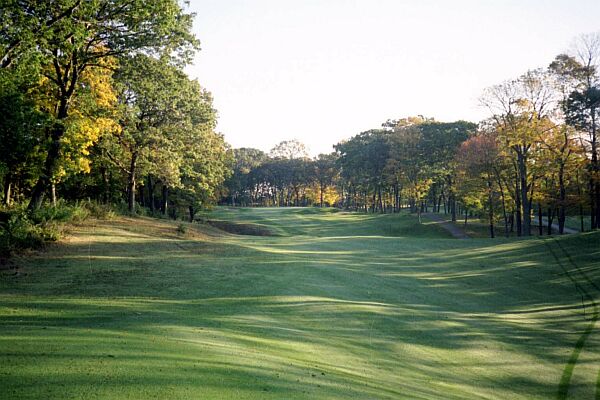 The view from the first crest on 15 shows the undulation on this narrow hole.

Hole 16, 440 yards: A long par 4 that is often considered the signature hole of the course. It is probably the hardest hole on the back nine, and for good reason. The drive is blind over a hill to a hogback fairway that repels shots both right and left. During the winter, the ocean can be seen from the fairway, but in summer, the leaves block the view. The approach comes with a long-iron or fairway wood to a green situated a good 80 feet below the fairway. If there is a following wind, long hitters may be able to hit down the hill off the tee, but the right play is to stay on top. This green also slopes severely from back-to-front. 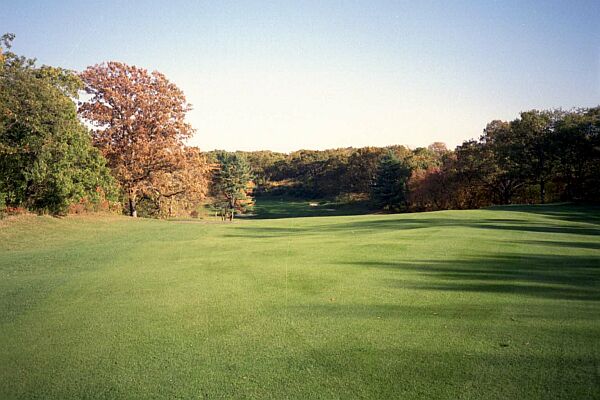 The green on the 16th is to the left of the bunker in the distance ¦ try keeping a ball in the middle of this fairway.

Hole 18, 450 yards: The finishing hole is long and flat, and though it plays to a wide fairway, the saddle-like green slopes away from the approach, which should come on the ground with a long-iron or fairway wood. The surrounds are great for the 18th, as the green is situated directly below the rock cliff, 1st tee, and clubhouse. 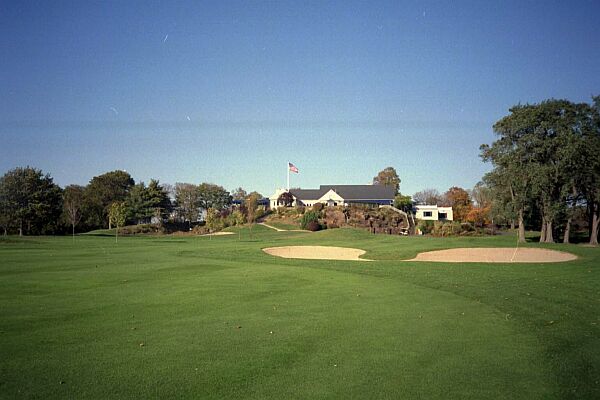 Tedesco CC is a great course for club play, as it is a test that can be played time and time again, and still test some of the better tournament players in the area. The superintendent Peter Hasak does a good job in keeping with the course’s original design, as he and his grounds crew have been working with a local architect on a master plan that has in the past few years cleared out some of the trees that had grown in since the early part of the century, and put the grass fingers back into most of the bunkers that had become of the flash-faced variety. Tedesco is a great course that will remain at the forefront of clubs on the North Shore of Boston for years to come.