Looking back over the last thirty years, one has to question the real contribution the equipment boom has had on the overall health of golf. To say golf courses are stretching is an understatement.

Time to complete a round is an oft-cited reason for many quitting the game altogether (or never starting in the first place) with many newly constructed designs being pushed to a turtles pace at 7,500 yards. But what has come of the quaint 6,500 yarder built pre-1950 with all of its slopes, angles, and undulations?

Many are going under the knife, but seldom for the better. Moving tee boxes back 50-70 yards on multiple holes creates a dilemma…and space. With more space comes more tee boxes.

“Players” tees are the new moniker for the “space”. Instead of the old standard four boxes: Ladies, senior men/accomplished ladies, mens, and championship, courses are now including up to four additional boxes.

The question is:  Should each player essentially have his own customized course or should he adjust his game to lay of the land and the intended architectural design?  With tee boxes every 250-300 yards (today) vs. the old standard of 500-600 yards, teeing grounds are looking more like landing strips, but many see the “options” as a good thing for the game. What could be wrong with having more options? Architecturally speaking, plenty, when the old adage of using every club in the bag becomes extinct. Here’s the rub:

• Short par threes with raised, smallish greens that used to demand a well struck 9 iron are now stretched to a 6 iron…making them nearly unplayable. Certainly no fun. (See figure 1)

• Long par fours that used to demand a long drive and a high 4 iron or run-up 5 wood are now reduced by 20-30 yards inducing a vanilla 7 iron, when the green was clearly designed to accommodate a lower-spinning, strategic ground-hugging approach.

• Short par fours that used to goad players to shape their drives into smallish landing areas with delicate wedge approaches, that if not struck properly, could spin back at a players feet are pushed back to boring drives to the fattest part of the fairway and bland 8 irons. (See figure 2).

• Risk/reward par fives that used to dare players to bomb 3 wood off the deck are stretched so that the only option is a stale lay-up, followed by lob wedge. (See figure 3)

Figure 1. Holston Hills Country Club’s benign 8th. At 148 yards from the Championship tee, many would write this off as an easy par 3. Observe carefully how the front 1/3 of the green fans from an anemic 6 yards at the front edge, to 12 yards just before the middle of the green. 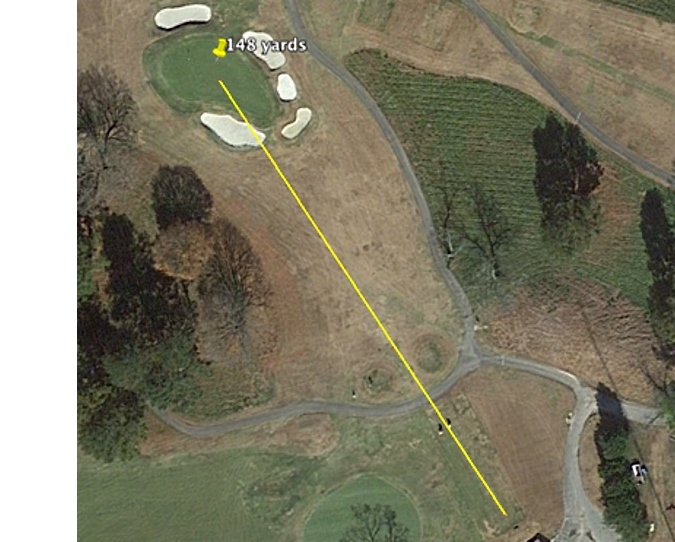 The bunker complex clearly says from the tee box, “middle of the green is fine” (at 21 yards wide). But when the pinnable front is utilized at 134 yards, players think birdie, but few can pull off such a minuscule miss without catastrophe. Wouldn’t it be a shame to stretch such a beautifully strategic hole into a card and pencil one? 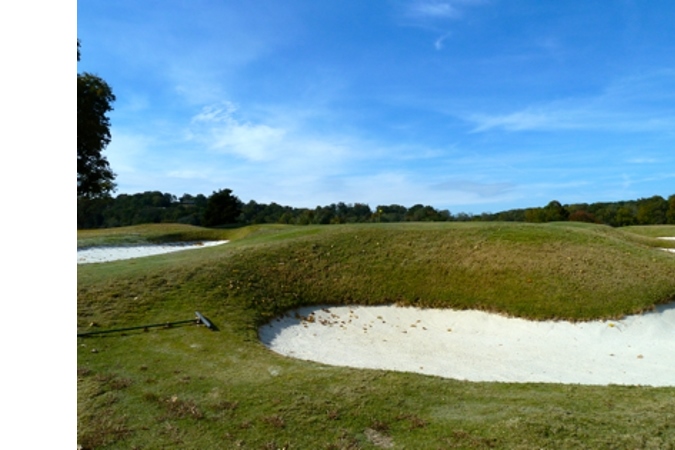 View from the front edge of the 6 yard wide entrance. Note the slightly raised green and the visual the bunkering creates.

Figure 2. Idle Hour Country Club’s 5th hole – Par 4. At 317 yards from the Championship tee, how can such a short hole (by today’s standards) continue to perplex? Easy. Make the player choose his path. The closer you dare, the more trouble you bring into play and the more uphill the stance. The safer you play, the flatter the lie, but the more distance you have to account for on the approach. 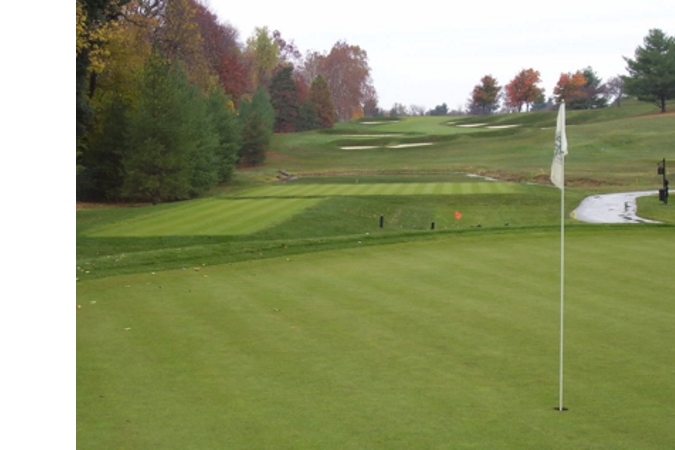 Plenty of fairway width makes this playable for all – a hallmark of great design. Can you imagine the character lost if this hole were extended another 40-50 yards? 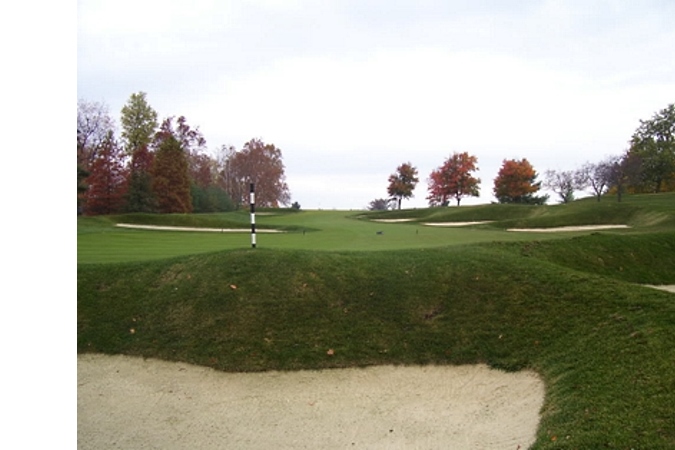 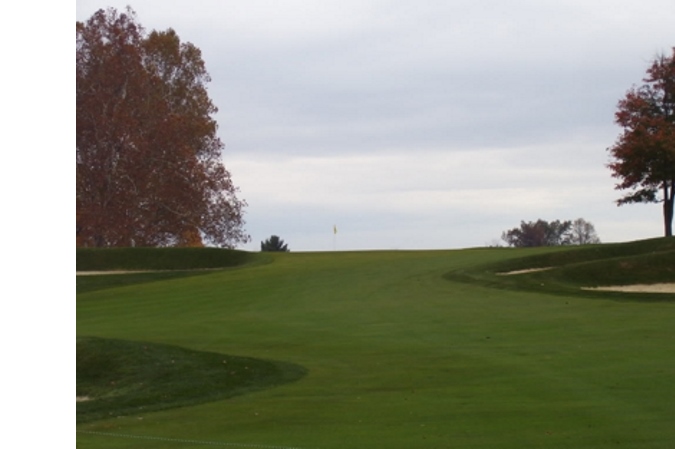 How many approaches come tumbling back to the players feet when the pinnable front is employed?

Figure 3. Cherokee Country Club’s 16th is a special risk/reward Par 5. Take a look at the intimidating three wood option from the deck (shown below from approximately 240 yards out) 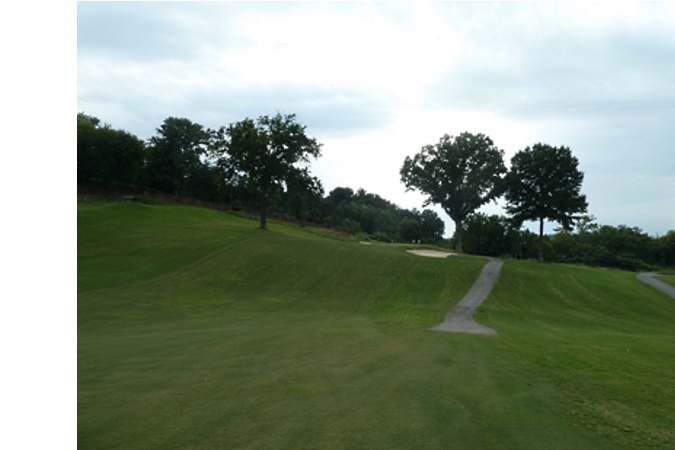 With thick rough left and a green that literally falls off the earth from the back third…and a thoughtful opening for run-up approaches, this is one of the more memorable Donald Ross design par 5’s one could hope to play. The modern club would surely demand this 526 yarder be stretched to a boring three-shot snoozer. 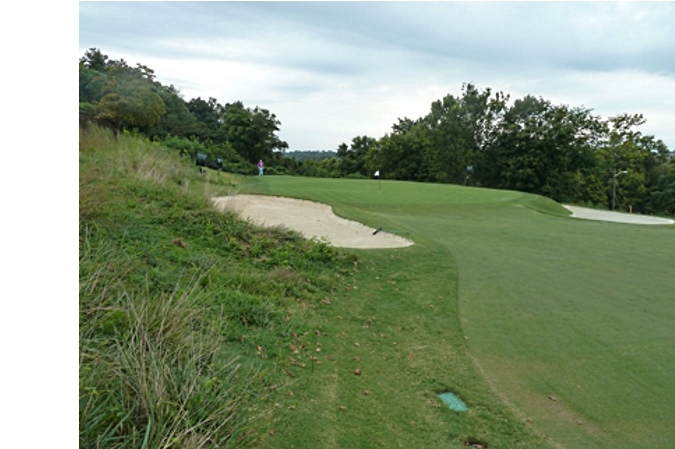 When every par 3 is between 150-170 yards, every par 4 is around 400 yards, and par 5’s are homogenized to 510-525 yards, variety suffers, as do the chance for memorable shots and unique shots. It is the epitome of architectural blasphemy as many of the angles, elements of risk/reward, and challenges of both long and short iron play are all reduced to one mundane round of golf.

Think about the shots that bring you back time and time again? The long, high 5 iron to a raised two-tier green. Running up a 3 wood from a seemingly impossible distance to putt for eagle on a par 5. The stuffed pitch to five feet that could only be attempted after successfully navigating a challenging tee shot. Our most memorable shots are disproportionally made up of a combination of difficult shots that inspire us to rise to the occasion and simpler ones that led to great scoring moments.

A friend of mine encapsulates the trend perfectly when speaking of his visit to an ultra-exclusive club in Arkansas, “… fairways are bowled which redirects wayward shots back into play and often the fairway. There are no short par 3’s, only one short par 4, and no short par 5’s. Very formulaic with no real design variety. More importantly there’s not a single original hole in terms of strategy among the 18 holes. Kinda like hamburger helper in that sense, absolutely no quirk or originality. There are no cool holes, nothing unique at all, just a relatively bland collection of holes with immaculate conditioning and cookie cutter looking bunkers. If you are a well traveled golf purist, the club is kinda like the Olive Garden, you know what you are gonna get is basically solid but nothing unique and probably not worth returning to again.” Sound familiar?

While some may still claim having multiple tee boxes along with adding or subtracting length allows more people to enjoy the game, the reality is golf courses that embrace this ‘style’ end up worse for a whole host of reasons:

1. Aesthetics – I don’t know what is more foul to the eye: a runway of oversized tee markers covered in purple, red, white, blue, black, blue, yellow, and green or a scorecard that looks more appropriate for bowling?  What about the short green-to-tee walks many of the golden age architects insisted upon?  Many have been replaced with the obligatory forty to sixty pace hikes.  Clean and simple always looks more elegant than cluttered and haphazard.

2. Slower play – Many would claim having multiple tees speeds play but the evidence simply doesn’t exist.  Players who used to be traditional ‘white’ tee players would rarely attempt the championship tees, but many will today venture back into the ‘buffer’ box and slow play often ensues as their games aren’t good enough for the increased yardage.  It’s also no accident that 7,500 yard courses take longer to play.  1,000 steps equals an additional 1/2 mile of walking.

3. Increased maintenance costs – More tee boxes require more labor to maintain, plain and simple. Ditto this for the reduction in natural areas that have to be moved back so that Johnny-can-only-carry-it 225 yards can play the 6,850 box.

4. Bland rounds – When every shot into every green is about the same distance, character and fun are lost. Players no longer have to adjust to the course and the challenges presented by the architect which many say is the reason great courses hold their attention for repeated rounds of play.

5. Bland holes – Ever heard of Arnold Palmer’s historic shot on the drivable first hole in the final round of the 1960 U.S. Open at Cherry Hills? Which hole is considered the best at the Northern Trust Open at Riviera Country Club? Many say it’s the risk/reward 315 yard, par 4, number 10. Lastly, what architect today is building holes like the feast or famine 135 yard, third hole at Wannamoisett Country Club? Holes like these are becoming an anomaly because they don’t fit the mold of the armchair architect who ‘designs’ with an ideal yardage in mind for each box compared to the architects of old who used the land as their guide.

So who or what is the real culprit in all of this and what could the solution be?

“What a farce is the business of length? Golf is surely the only game, either in the United States or Britain, whose whole character has been changed soley by so-called improvements in instruments in which it is played. I cannot believe that the parties concerned would alter Wimbledon, Forest Hills, Wembley, and Yankee Stadium simply to accommodate a new ball, which when struck in the same manner, happened to go further. I rather fancy they would tell the manufacturers what to do with their new ball.” – Henry Longhurst, 1953

The golf ball is the problem. Simply put, it has been allowed to fly too far for too long.

“The golf ball? Are you joking? What man on earth doesn’t get a thrill out of driving the ball 20-30 yards further in his 50’s, than in his 30’s? Isn’t that the appeal of the younger generation – distance?”

It may be fun to drive it further, but at what cost? And are more people participating in the game because of the distance boom? I think we all know the answer.

The easiest solution for the USGA, R & A, and PGA tour is to rollback the ball. Actually, it’s in the game’s best interest. The manufacturers have the “technology” to do this tomorrow. Augusta National has hinted of doing this for the last few years but hasn’t (yet). If we continue moving “forward”, 8,000 yard “Championship” courses will be commonplace, and so will course closings.

“The main culprit (in) slow play, to me, is the golf ball and the distance the golf ball goes. Golf, it used to take three hours, three and a half hours, British Open, you used to play the last round in three hours or less. Today they take close to five hours. If we went back and left equipment alone but changed the golf ball and brought it back, you played a shorter golf course, not only from the Tour standpoint would it be good, but a shorter golf course all through the game would mean less maintenance cost, less cost to play the game, quicker play, less land, less fertilizer, less everything, which would make the game more economical.” – Jack Nicklaus

Distance isn’t what attracts and holds the players attention. Nor is the logo-clad professional.

“The golf course is the game’s biggest asset”, as Geoff Shackelford states in his excellent, The Future of Golf in America.

Few of us will ever take batting practice at Wrigley Field, shoot a three-pointer at the Boston Garden, or kick a field goal at Lambeau field, but anyone can play Pebble Beach, the Old Course at St. Andrews, or Pinehurst. This is the soul of our game.

Moving our national treasures back 500-700 yards to accommodate a small percentage of the population is tantamount to drawing a mustache on the Mona Lisa. For some reason, few equate moving tee boxes with defacing the works of Ross, Raynor, Tillinghast, MacKenzie, or Macdonald, but that is exactly what has been permitted to happen.

Who would have thought a a $3 ball could cost so much?