Oak Ridge Country Club opened for play in 1921. Oak Ridge has much in common with classic courses built during that era. Its resemblance is not a coincidence. At that time, many of the Golden Age’s best were at work in the Twin Cities:

William D. Clark designed and built the original nine holes at Oak Ridge in 1921. He served as head professional until the early 1940’s and built a second nine holes around 1940. My research has revealed no direct information about Mr. Clark’s background. I can only find two courses that Clark designed, Oak Ridge and a fine municipal course in Minneapolis, Francis A. Gross, built in 1925.

An article (apparently from 1955) on the club website gives no indication of Clark’s background, but it appears he was familiar with constructing courses.

On September 22, 1920, . . . Ralph Hamburger received a letter from Mr. W.D. Clark, that probably didn’t come as a complete surprise. Mr. Clark said he wanted to be the professional and greens keeper and golf course architect for the new Club. He said he would supervise the whole layout, grading, planting, seeding, laying of water pipes, and digging the well. He would keep complete records and watch things like a hawk. His fees were high. Clark asked for, and received $250 per month while construction was proceeding and he was to have a $500.00 bonus if the course was playable in July 1921. . . .

Based on this thin evidence, I strongly suspect that Clark would have had ties to at least one of the famous architects working in the area. Specifically:

While the details of Clark’s connection with the architects that visited the area may remain a mystery, there can be no mystery that he left behind a fantastic course at Oak Ridge. The course sits on naturally rolling terrain and makes brilliant use of natural contours to create unique challenges on almost every shot. The course measures less than 6600 yards and plays to a par 70.

Oak Ridge’s strength lies in variety and the difficulty of the greens and surrounding terrain. A player must precisely place his tee shots to gain the most advantageous angle to the greens. The player will face a variety of approach shots which, if missed, must be missed on the correct side or an extremely difficult recovery shot will result. Nonetheless, recovery is possible and with an outstanding short game, one can play any of the holes without hitting the ball perfectly.

The course carries a nice rhythm. The first three holes provide ample challenge, but are pretty straightforward. You can see the challenges and decide how best to attack them. Holes four through six provide birdie opportunities, with the opportunity to either make up ground or make a big number if one fails with an aggressive shot. The one shot seventh is a 200 yard par three, starting a challenging finish to the front nine.

From the eighth hole onward, the course provides a stretch of holes that are among the most enjoyable I have ever played. The eighth and ninth provide stern challenges to finish the front nine, albeit in contrasting manners. The 457 yard eighth has a very wide fairway and plays significantly down hill with an open front green that receives run up shots. While the green is not severely sloped, it contains many subtle breaks complicated by its hillside surrounds.

In direct contrast, the 420 yard ninth plays uphill, and is extremely tight off of the tee. A drive clearing the hill on the right side will propel forward from a downslope resulting in an approach from around 150 yards. A more conservative tee shot leaves a longer approach to a tightly bunkered green. Once one reaches the green, a relatively benign putting surface awaits. 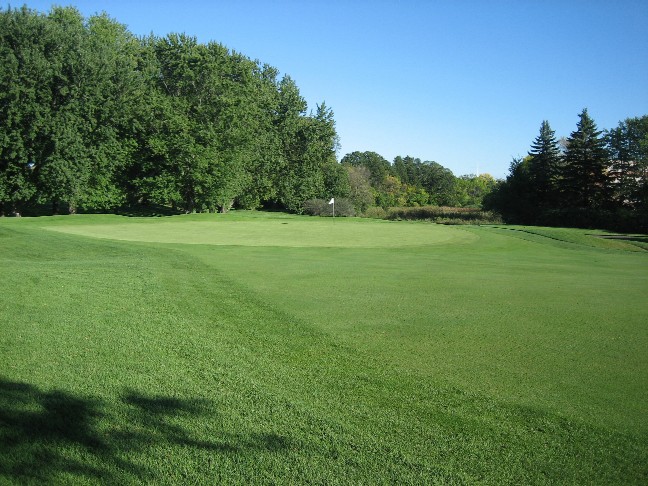 The appealing eighth green from the left. 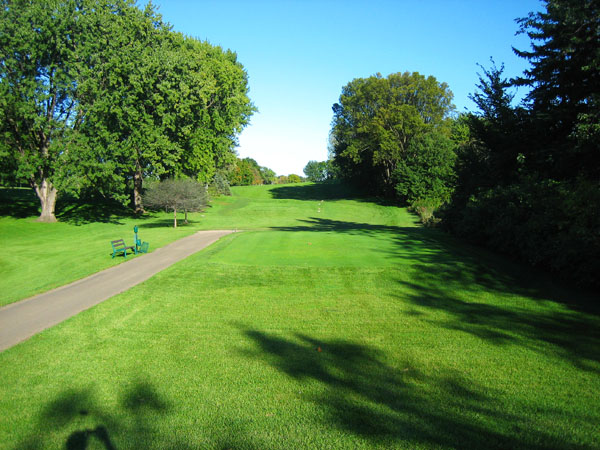 The ninth tee calls for a fade to avoid out of bounds on the right.

A strong testament to the strength of the back nine is that it remains very similar to the layout that originally existed in the twenties. Aerial photographs reveal changes in the bunkering over time, but the fundamental layout, the interesting greens and the terrific fairway contours appear to have changed little over the last eighty years.

At 336 yards and a wide fairway, the tenth hole looks like a simple start to the back nine. That initial impression disappears when one realizes that an aggressive draw around the corner is necessary to have a completely visible pitch to the green. Furthermore, the green slopes severely from back to front and from left to right. 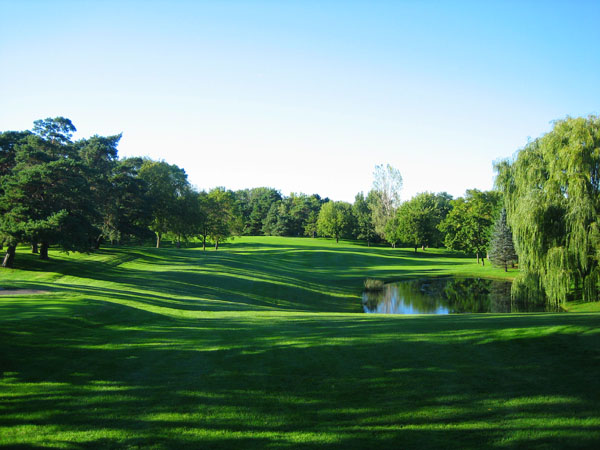 The tee shot on the short dogleg left tenth. An aggressive draw off the tee with a driver can leave a visible pitch from 80 yards or less.

The eleventh and twelfth holes present difficult challenges. The eleventh is a 217 yard one shot hole bunkered on the right with short grass and hollows to the left. The twelfth is a downhill 420 yard two shot hole that is straight on the card, but the contours create essentially a double fairway. While the fairway is wide, a large hump in the middle tempts the player to aim left off the tee near trees to allow for a visible second. The approach must be precise, because of severe slopes and a false front on the green. The safer alternative to the right side of the fairway leaves a blind shot from an uneven lie. 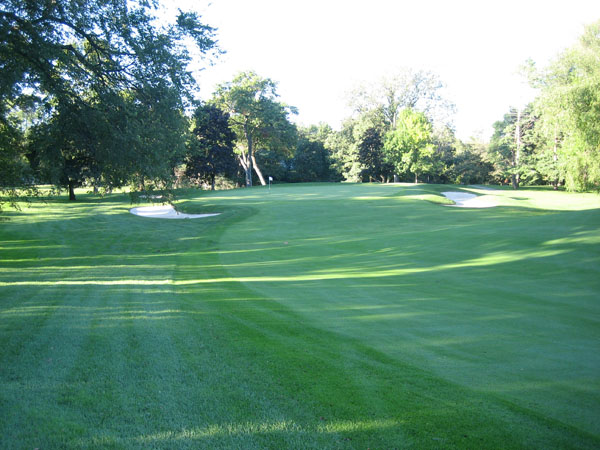 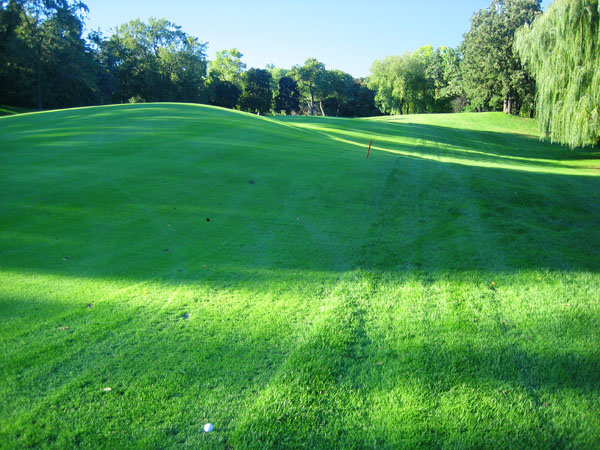 The contrasting options off the tee on twelve. A drive tempting trees on the left leaves a visible shot from a flat lie to a green that slopes obliquely to the shot (first picture). A drive to the right leaves a blind approach from a side hill lie to a more receptive green (second picture). The two tree trunks in the distance provide a reference for comparing the two shots.

The thirteenth through sixteenth holes present opportunities for birdies and risks of ruining a round. The tee shot on the 350 yard thirteenth is one of my favorite on the course. The goal is to have a flat lie for a pitch to a raised green. Two flat spots exist, one on top of a ridge at 130 yards from the center of the green on the left side and another from 80 yards directly below the green. The 80 yard spot can be reached by a fade around the trees guarding the corner, a straight shot or slight draw with a driver that clears the hill and uses slopes to funnel to the spot, or through a direct attack by hitting it over the trees. I try all of these alternatives depending on my game and weather conditions. 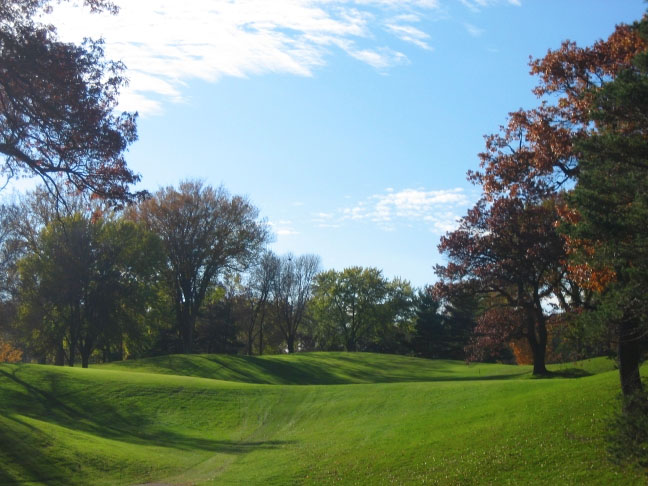 Tee shot on the thirteenth. The shaded area to the left is fairway making it larger than it appears in this picture. The crest of the hill is about 200 yards from the tee. A flat spot 80 yards from the green can be reached by any shot that clears that crest within the confines of the fairway. Alternately, a good tee shot can carry the trees on the right. 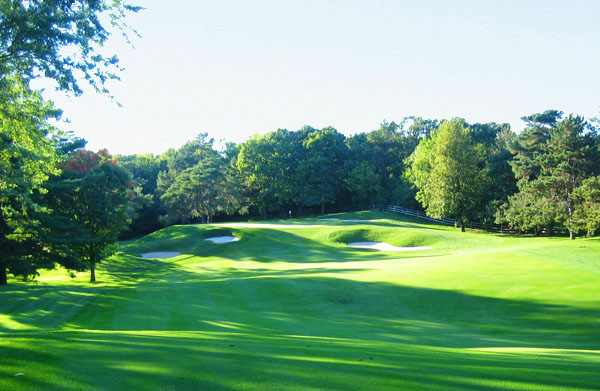 Approach on the thirteenth from 130 yards. If you get past this slope off the tee, the ball will funnel to a low spot on the right side of the fairway.

The fourteenth is an uphill 540 yard par five. I can only reach the green in two in favorable weather conditions, but there are flat spots at 150, 110, and from 80 yards in to the green. I prefer to be as aggressive as my game will allow because of severe slopes on and around the green that punish a poorly placed pitch.

The fifteenth is another short par four at a downhill 362 yards. The fairway is pinched between trees and bunkers at 100 yards from the green. If the player threads that pinch point, he can get pretty close to the green due to a down-slope and prevailing helping winds. Again, a severely sloped green forces the player to be precise with the approach. Unless you are very close to the pin, short and right of the hole is where you want to be. 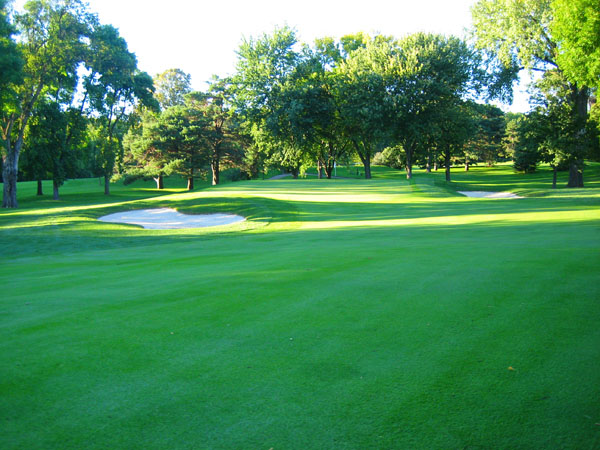 Fifteen green from the preferred angle of attack on the right. A fairway bunker is just behind the camera at about 260 yards off the tee.

Sixteen is a pretty typical American Eden imitation at 170 yards. While the hole is similar to others on many courses, the timeless value of this design makes it a fun hole to play. 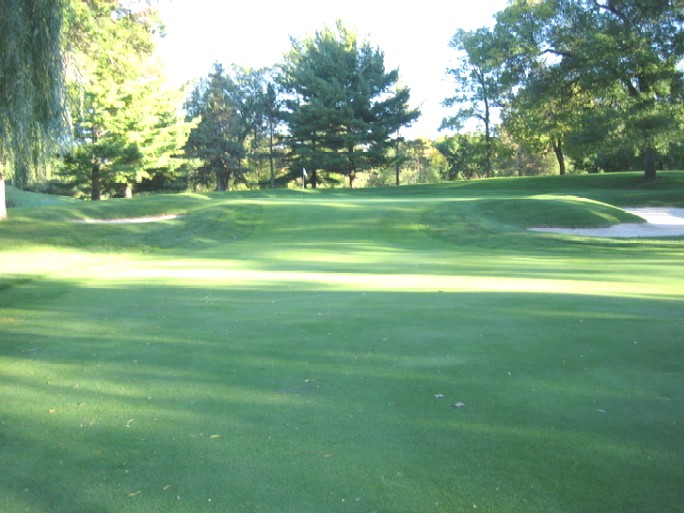 The 170 yard sixteenth from the forward tee. The back tee is to the right of this angle.

Oak Ridge finishes with two terrific closing holes. Like the front nine, they are of contrasting character. The seventeenth is a tight 387 yard par four that plays somewhat uphill. An accurate driver can use fairway slopes to feed and propel forward his drive for an approach to the green from between 100-150 yards. The second shot is to a huge green that plays somewhat uphill over a valley.

Despite its short length, seventeen is a very difficult hole. The green is elevated 40 feet from the fairway in front, is hog backed and tilted back to front. You must place your approach downhill from the hole or face a difficult putt. Because of the sharp slopes surrounding the green, a shot to the middle of the green is always tempting but can make a two putt difficult.

In contrast to the seventeenth, the eighteenth features a wide fairway on a 437 yard par four. The fairway plays very wide if one’s goal from the tee is a 190 yards blind shot into the green. There is, however, the opportunity to hit a tee shot that hugs the right side and avoids a diagonal slope about 250 yards off the tee. The player that hits that shot will be left with a visible, 140-160 yard approach. 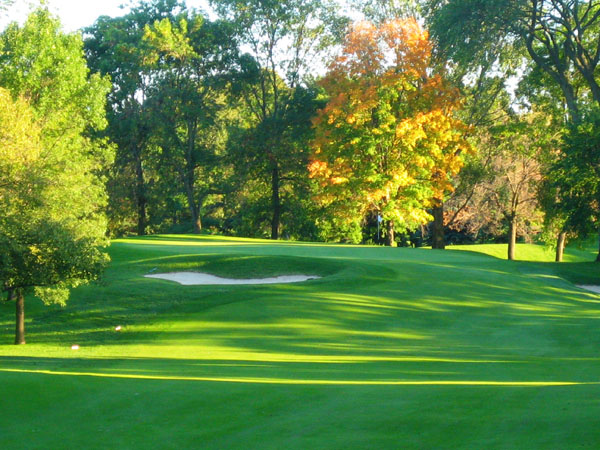 The seventeenth green. The photograph does not really do justice to the severe slopes away from the green on all sides. Because of the hogs back nature of the green, it may be preferable to short side yourself rather than leave a 30 foot putt from the middle. 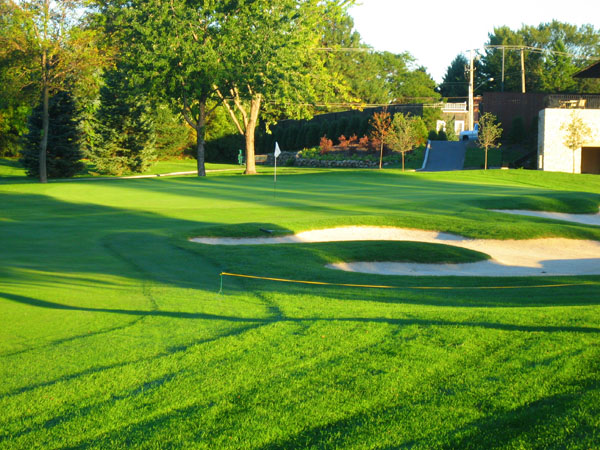 The eighteenth green from the right rough.

Thus far, Oak Ridge has held up well in the face of technology. In the 2004 US Amateur qualifying many players substantially shortened the course by aggressively cutting corners of doglegs. Nonetheless, only four players broke par in good weather conditions with a total of one under par qualifying for the championship.

Despite the challenge to better players, my ten year old son can have a great time playing Oak Ridge. Unless the rough is long, it is tough to lose a ball. There are no forced carries over hazards and while tight in places, there is more width to the course than the pictures suggest.

After one season of membership and twenty years as an occasional guest, I am still learning how to play Oak Ridge. My short game has definitely improved. On the course I feel a welcome break from the pressures of work, the challenges of playing taxi driver for the kids and the hassles of living in a city. Two foxes reside on the course and in the evening, they seem to follow me around at a respectful distance. Deer visit regularly. In this enjoyable setting, Oak Ridge reveals my weaknesses as a player, rewards my successes and makes me look forward to returning again soon.