Rowlinson, Mark – Leadhills and the Joy of Gutta Percha

Rowlinson, Mark – Leadhills and the Joy of Gutta Percha

Leadhills and the Joys of Gutta Percha
by Marfk Rowlinson

Leadhills is a an old lead-mining village high in the Lowther Hills in southern Scotland south of Glasgow. It has had a golf course since the 19th Century, although its present 9-hole course dates from the 1930s. It is the highest course in Scotland and, until a new tee was built at West Monmouthshire in Wales, was the highest in all Britain. However, it is still primitive enough to be an ideal place for the recreation of classic golf with hickory shafts and hand-made gutta percha balls. I was given the opportunity to do so by Alfie Ward who is developing a business which gives the chance for visitors to Ayrshire, Glasgow and Edinburgh to try their hand at the real thing, for Leadhills is not more than an hour’s drive from any of them. At 4,354 yards for 18 holes at a par of 66 the course might seem ridiculously short, but I could not persuade a guttie drive to pass 150 yards and my iron shots flew about 1/3 as far as the equivalent shot with modern equipment. The greens are tiny, mostly ingeniously sited, and everything is utterly natural. My visit was in winter when the rough was benign and the heather dormant. In summer it can be quite a handful. The turf is of an excellent moorland type.

Everything is immediately put into perspective with the opening drive. Strong players with modern clubs and balls may aspire to reaching this green, 301 yards distant. But a gully crosses the fairway about 150 yards out and there is every chance that the guttie ball will finish up in it (if it is struck well enough!). The pocket-handkerchief green is triangular, hard up against a fence on the right and close to the remains of an old narrow-gauge mineral railway track through the back. Miss on the left and the ground tumbles away into the heather. 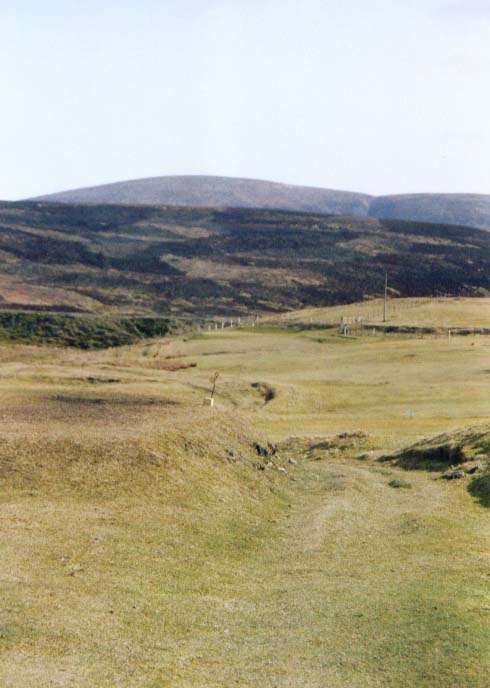 View from tee towards 1st green. 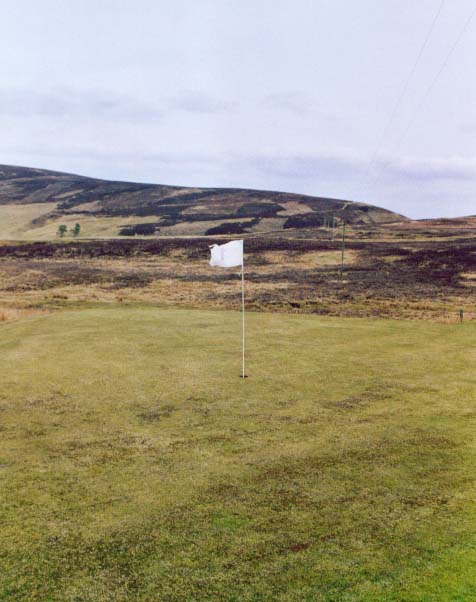 The par-4 2nd is shorter, a mere 226 yards, but, again, the drive must avoid the gully shared with the 1st and the green is cunningly raised up behind a dry moat. 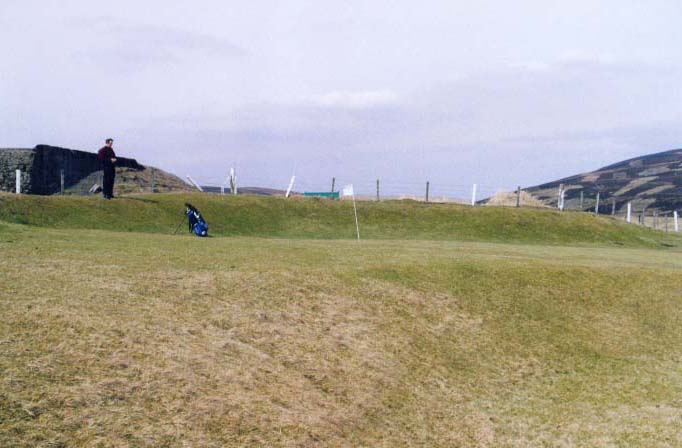 The Dell at Lahinch is brought to mind on the 3rd, a 152-yard par 3 played blind over a hummock and steeply down over bumpy ground to a secretive little green. A full drive almost got there! 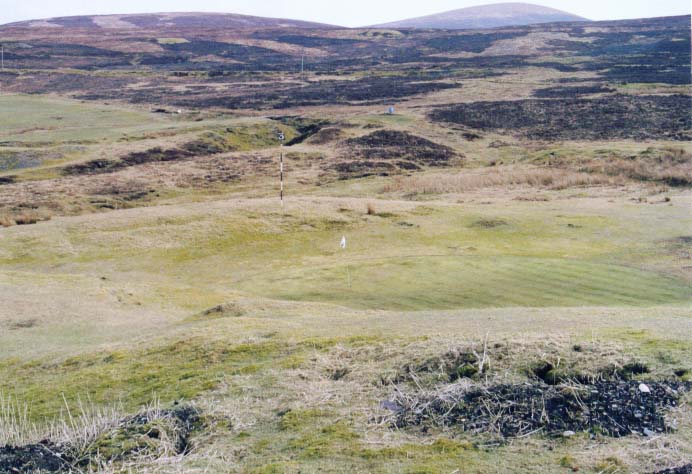 The 3rd green, at the bottom of a deceptive slope.

It is then a full clout with the driver in an attempt to clear the nasty rough ground and rocky gully which lie between the 4th tee and the fairway. This is a compulsory carry and the problems of getting the guttie ball airborne yet controlling its flight are magnified by the omnipresent wind and by the distant sloping fairway. Vestiges of what may once have been sand bunkers lie on the left at about the length of a good drive. Further progress on this 305-yard hole is made uphill with the green more or less on the summit where the ground also slopes sharply away to the left into an abyss of serious proportions. I could not get near the green in two, but never were the virtues of the low, running approach shot played with a flat-faced club made more apparent. 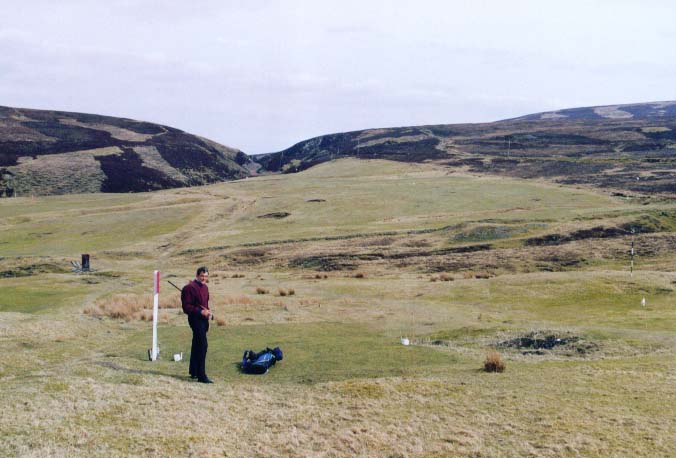 Alfie Ward surveys the prospect from the 4th tee. 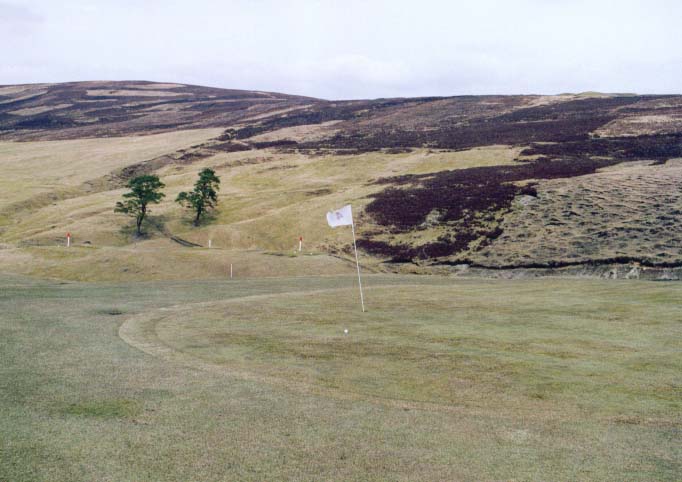 The dangers of overshooting the 4th green are plainly evident. Traces of the 19th Century course can be seen on the hill opposite. The 5th and 7th tees are both located on the big hummock in front of the two trees visible below.

From an elevated tee, the drive at the 300-yard 5th is over a deep depression and semi-blind over the brow of a hill on the far side. The fairway runs helpfully downhill but, from whatever distance, the approach to the green is fearsome, a big carry over a deep, rocky cleft. What would be a mere flick with a wedge in contemporary golf becomes very demanding with the long, straight-faced club almost certainly required in this form of golf. 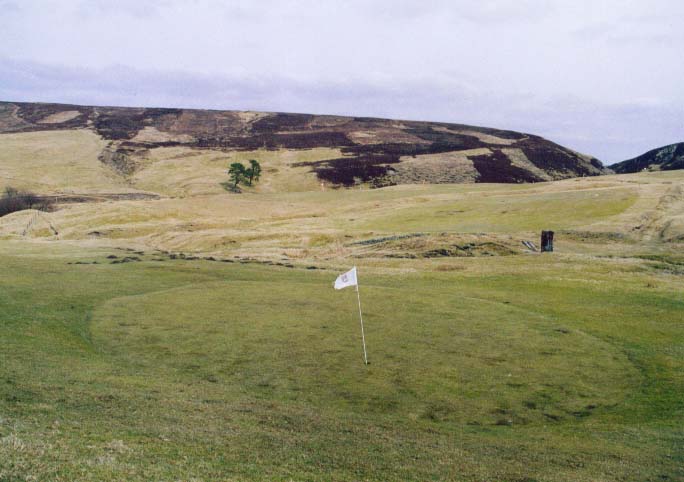 The difficult carry to the 5th green is made over this serious rocky chasm.

From a tee alongside the 4th, the 6th is played over that same cleft which so dominated the 5th and the carry is again considerable. The hole is a par 4 of only 266 yards but the approach to the green is made blind over a heaving fairway before dashing down to a green hidden in the bottom of a valley. 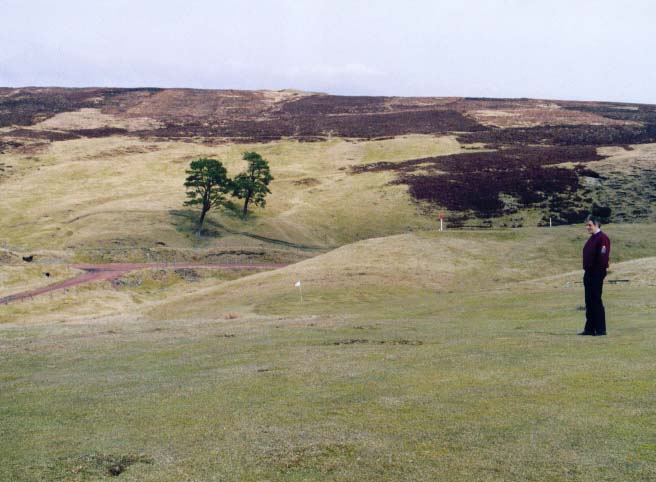 The approach to the 6th green is made blind from the bottom left-hand corner of the picture.

I cannot believe the given yardage for the 7th, 133 yards. I was utterly unable to make the carry uphill to a high, domed green with guttie nor even a 1920s-style honeycomb ball flat out with a driver. And when I re-played the course later using modern clubs and balls (when I also took the photographs) I failed with a 4-iron twice! 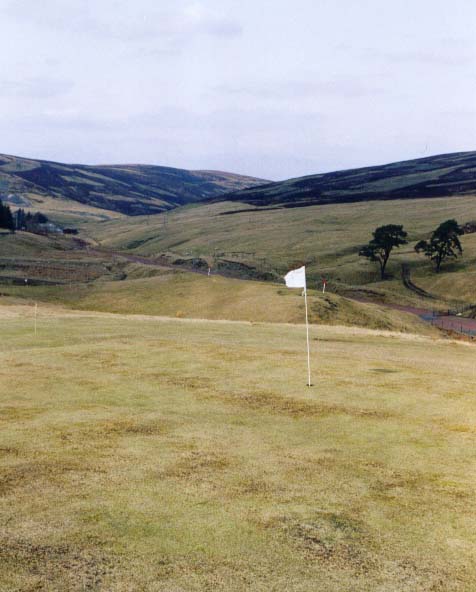 The 7th tee is located to the left of the flag in front of the left-hand of the two white posts on the hillock far below. Ignore the given yardage and use your instincts!

It is then a gentle walk uphill to find the 8th tee, the highest point on the course. A pleasant downhill drive follows. There is plenty of trouble on the left (a burn and dense heather) should the drive be pulled in an attempt to drive the green, for it is only 273 yards distant. 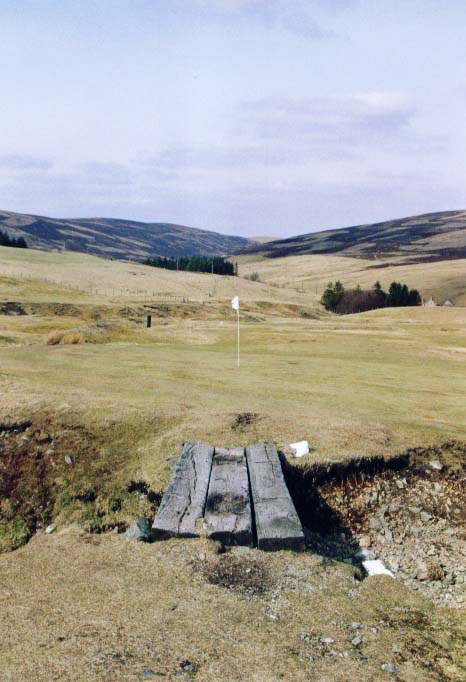 This burn threatens any pulled shot on the 8th.

Again, I simply cannot believe that the 9th is a par 3 of 221 yards. It is a full drive simply to clear all the heather, rough and rocky outcrops on the direct route from the tee (set out in wild country to the left of the 8th green) and then something like a full 9-iron to make the climb to the ledge green in front of the clubhouse – and that with modern kit! A mound and the remains of a former bunker complicate proceedings around the green. 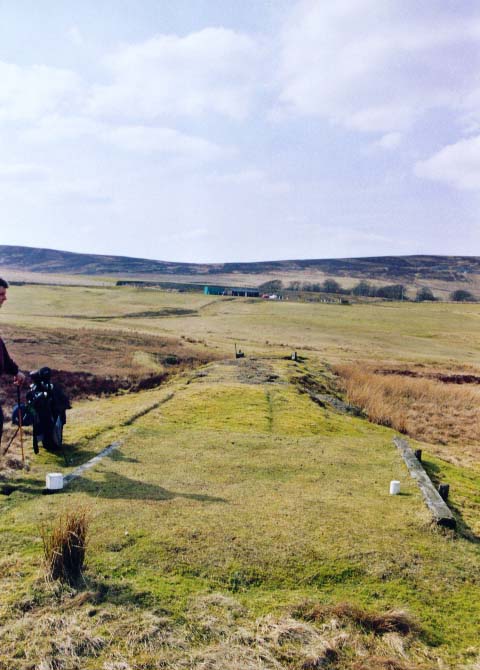 The daunting carry from the 9th tee. 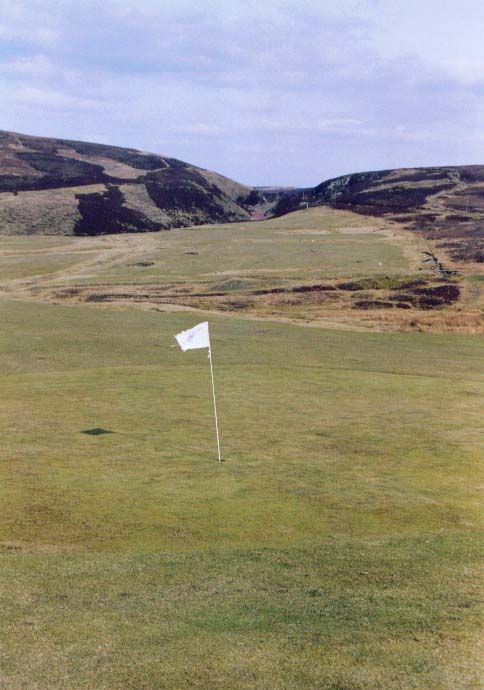 The view from the 9th green looking back up the 8th fairway. The approach to this green is from the centre-right of the photograph.

Leadhills is hardly the last word in design – the layout was simply a pragmatic way of getting round a rugged plot of land – but the place is full of character, ideally suited to test the techniques and skills required of old clubs and balls, and Alfie’s unfailing good humour and encouragement make the whole experience so much more valuable. Do contact him if you are visiting Scotland and fancy something very different (alfie@fernie55.freeserve.co.uk).