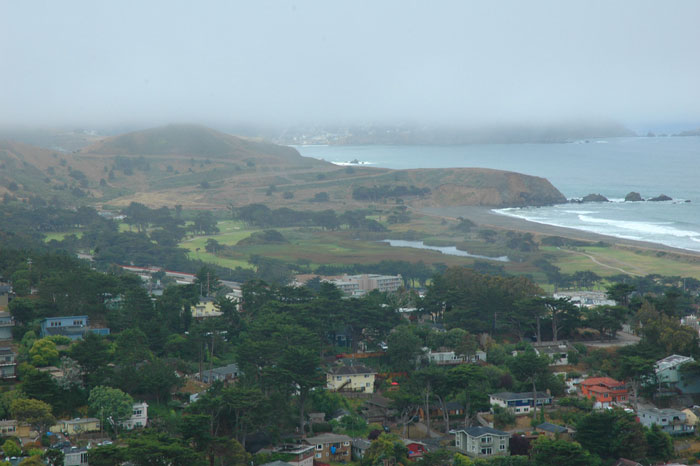 And 1964 U.S. Open Champion Ken Venturi, honorary chairman of the San Francisco Public Golf Alliance, is fighting to save the historic course.  “It is unthinkable that San Francisco would seriously contemplate destroying Alister MacKenzie’s masterwork,” says Venturi, a San Francisco native who learned his golf at Sharp Park and the city’s other public courses.  “So I urge my friends and fellow golfers to preserve Dr. MacKenzie’s legacy, and defend it with your time, your money, and your passion.  Do not let anybody destroy Sharp Park.”2

Designated an at-risk nationally-significant cultural landscape by the Washington D.C.-based Cultural Landscape Foundation 3, Sharp Park is a San Francisco municipal course located in that city’s southern coastal suburb of Pacifica, in San Mateo County.  Opened in 1932, the popular, reasonably-priced course is one of only a handful of public courses in the world—-and the only public seaside links–designed by Dr. MacKenzie, acclaimed as one of history’s greatest golf architects.4

An early photo of Sharp Park

Since 2008, environmentalist groups led by the Tucson-based Center for Biological Diversity (“CBD”) have campaigned to force San Francisco to close the golf course and convert it to a nature sanctuary for the endangered San Francisco garter snake and California red-legged frog.  “Nobody in San Francisco cares about Sharp Park,” says attorney Brent Plater, who has spearheaded the campaign for CBD and its spinoff group, Wild Equity Institute.  “If that golf course were to fall into the ocean tomorrow, nobody would blink an eye.”5

Ken Venturi could not disagree more.  “Sharp Park is a great course of the old school… a seaside course that connects golfers to the Scottish public course roots of the game,” Venturi says.  “It is Dr. MacKenzie’s great gift to the American public golfer.”6

The San Francisco Recreation and Park Department in April, 2009 adopted a Sharp Park Endangered Species Compliance Plan18, specifying organic and other eco-friendly golf course maintenance practices.  It seems to be working,  because so far in 2011, Sharp Park has recorded a record-high crop of new red-legged frog eggs.19

In 2009, the Recreation and Park Department retained the preeminent frog and snake scientist at Sharp Park to develop a plan coordinating with ongoing habitat enhancement at the Golden Gate National Recreation Area’s adjacent Mori Point park.  After a six-month study, consulting biologist Karen Swaim and project director Tetra-Tech Inc. concluded that retaining and modifying the 18-hole golf course was not only compatible with enhanced frog and snake habitat20, but also several million dollars less expensive than turning the property into an exclusive frog and snake sanctuary.21,22 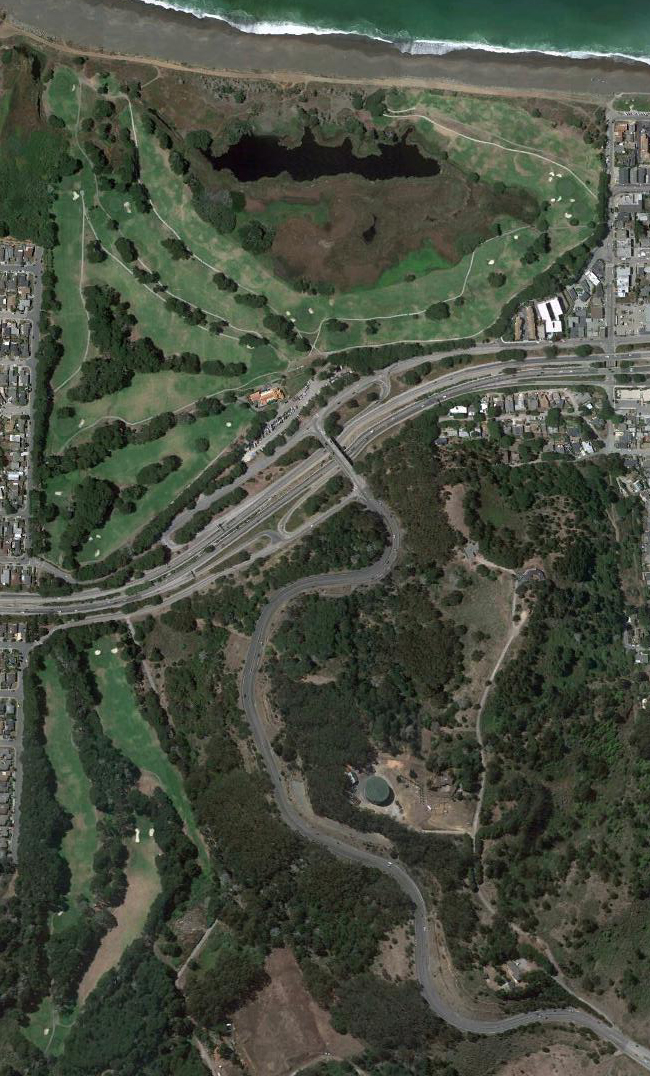 An aerial of Sharp Park today.

In December, 2009, after extensive public hearings, the Recreation and Park Department’s citizens’ advisory committee recommended23–and the Park Commissioners adopted24–a compromise plan to improve natural habitat, while keeping the golf course open.  The plan won the support of the Sierra Club chapter in San Mateo County 25, and is currently undergoing environmental review, which is not expected to be complete until late 2011 or early 2012.

In June and July, 2010, CBD and its allies pressed their case in the San Francisco Supervisors’ annual budget hearings.  But after several public hearings, the Supervisors, too, rejected CBD’s anti-golf campaign.26

In October, 2010 and January, 2011, over objections from CBD and its allies, the San Francisco Public Utilities and Recreation and Park Commissions gave final approvals to an $8 million recycled water irrigation project for Sharp Park Golf Course.27 Groundbreaking was held in February, 2011, and construction is now underway.   Also in February, 2011, a “working group” comprised of representatives of the cities of San Francisco and Pacifica, San Mateo County, and the Golden Gate National Recreation Area, reached mutual agreement that a plan could be developed to retain the 18-hole golf course, while protecting the frogs and snakes.28,29 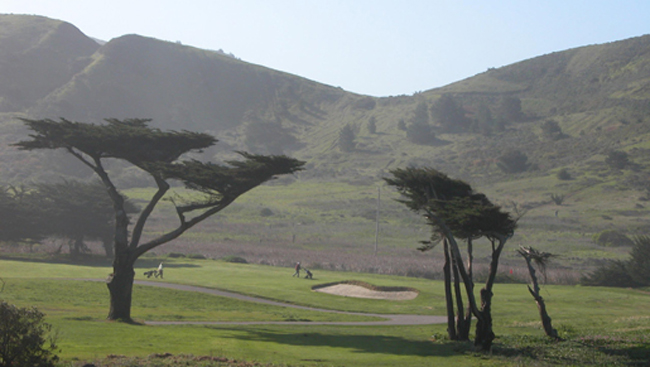 Following this string of political set-backs, CBD and Wild Equity on March 2, 2011 filed their lawsuit in Federal Court in San Francisco,30 asking the Court to order a halt to golf and maintenance activities at Sharp Park.31 Among other things, the Complaint alleges that fairway mowers, fertilizers, gopher traps, flood control pumping, and golf carts kill protected frogs and snakes, in violation of the Endangered Species Act.  CBD has been making similar claims since 2008.  No trial date is set. A former CBD staff lawyer and founder of Wild Equity, Mr. Plater is identified on the Complaint as the Plaintiffs’ attorney.

“The lawsuit rehashes the narrow and unreasonable claims of golf opponents who have not yet acknowledged the valid interests of historic preservation, working-class golfers, local businesses, neighbors, and the governmental bodies that have considered all sides of the public debate and are looking for a win/win solution,” says Sharp Park Business Women’s Club member and Public Golf Alliance spokeswoman Lauren Barr.  “When all the facts are considered, we expect that CBD’s lawsuit will have no more success closing the golf course than their political efforts.”

Sharp Park is the most affordable 18-hole golf course in the San Francisco Bay Area, and one of only two public 18-hole courses in San Mateo County with prime-time weekend greens fees under $80.32 So it is a key to Bay Area public golf, according to San Francisco favorite son Venturi.  “Without the public courses, golf becomes inaccessible,” he says.  “Without them, the game shrivels and dies.”

“Reasonably-priced public golf for all different kinds of people can and should coexist with the frogs, snakes, and nature, as they have all coexisted at Sharp Park for decades,” Venturi says.  Golfers are optimists.  Venturi thinks the Court will agree.

8 Sharp Park’s diverse golfers speak for themselves in the following videos:

14  County of San Mateo, Resolution of Board of Supervisors, December 18, 2007:  http://sharppark.savegolf.net/data/smbos_res.pdf

22  By contrast, an “essential concept” of the alternate plan advocated by CBD and Wild Equity to close the golf course, calls for over- or under-passing the 150-yard-wide Highway One and frontage roads where they bisect the course, so that frogs and snakes could migrate from the ocean to the hills east of the golf course.  Conceptual Ecosystem Restoration Plan and Feasibility Assessment:  Laguna Salada, Pacifica, CA., Prepared for Wild Equity Institute, Center for Biological Diversity, by ESA PWA, Feb. 9, 2011, pp. 26-27 at pgh. 6.1, and pp. 36-37 at pgh. 6.7.  A link to that report is found on Wild Equity’s press release: http://wildequity.org/entries/3146.  The plan’s authors did not provide design, feasibility, or cost estimates for their freeway modification ideas, other than referring to the Doyle Drive project, currently undergoing reconstruction to connect San Francisco to the Golden Gate Bridge.  Id., at pp. 29-30.  Doyle Drive cost estimates exceed $1 Billion.   http://www.presidioparkway.org/about/funding.aspx

31  Although listed among a handful of environmental groups as plaintiffs in the lawsuit, the Sierra Club in a March 3, 2011 letter from Deputy Executive Director Bruce Hamilton, clarified its position:  “… the Sierra Club has not specifically endorsed removal of the golf course.  Saving the animals’ habitat may require the city to remove the golf course, or the city may find a way to run the facility while protecting the habitat.  We will be satisfied with whichever course of action truly ensures the survival of these important species.”  Pacifica Riptide, March 3, 2011, “Sierra Club Clarifies its Position on Sharp Park”:  http://www.pacificariptide.com/pacifica_riptide/2011/03/sierra-club-clarifies-its-position-on-sharp-park.html