Schizophrenia is a horrible disease, especially in a golf course. Hannastown Golf Club, my home course, in Greensburg, Pennsylvania definitely could suffer from it. But, given the possibility, the course does a good job of avoiding it.

The club was originally founded by Thomas Jamison, who was an Oakmont member and lived in Greensburg and wanted his own private course. The first 9 holes were built in 1919 by Emil ‘Dutch’ Loeffler, the long time superintendent / professional at Oakmont Country Club. The club went for nearly 80 years as a 9-hole facility, but in 1997, Brian Ault and Tom Clark were hired to add 9 more holes. Due to the location of the clubhouse on the property and the desire to return to the clubhouse after 9, the new 9 and the old 9 had to be intermingled. The golfer today plays 2 old holes, 6 new ones, 4 old ones, 3 new ones and finishes on 3 old ones. Given that the old 9 has old style greens that are pure poa annua and the new 9 has USGA speck greens with bent grass it does make getting a feel for the greens somewhat of a task. Fortunately under the direction of the former superintendent Ron Pusateri and his successor Micah Lowell the greens are usually firm, fast and as consistent as can be expected.

The original 9 definitely was influenced by Loeffler’s experience at Oakmont with fall-away greens, a very long par 3 similar to #8 at Oakmont and a final green that is tied into the practice putting green. The new 9 has smaller greens that feature some very interesting slopes and mounds in the center of the greens. These greens tend to penalize the player who tries not to short-side himself by creating difficult chips over the center mound to a green that slopes away. Frequently the player who does miss on the short side has an easier uphill chip.

#1 â€œ 436 yards –The course starts with one of the tougher par 4s on the course. OB runs all down the right side threatening to get the player who hits a weak slice off to a bad start. The tee shot is over a valley to a plateau with one large bunker on the right. From there the player is left with a shot of 150 to 200 yards over another small valley to a green that is one of the most severely sloped on the course. A large bunker guards the front of the green, although it is actually about 15 yards short of it with fairway behind. The smart golfer will always prefer being over the bunker and short of the green rather than behind the hole. From over the green, it is frequently hard to keep a ball on the green and three putts are a definite reality from behind. 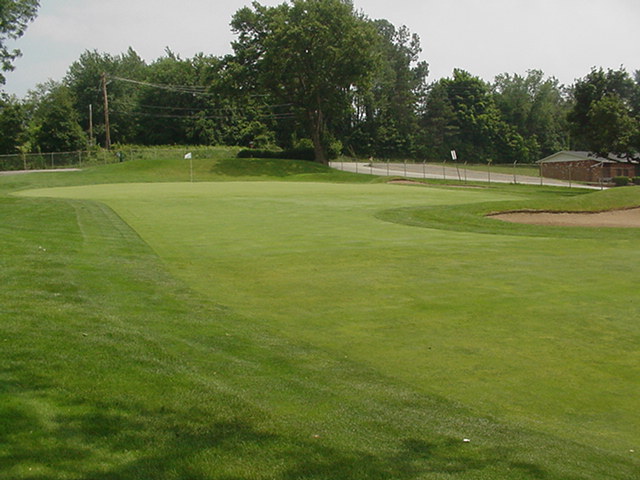 The first green at Hannastown is one of the steepest on the course.

#2 â€œ 131 yards â€œ After the difficult first hole, the player who can control his distance gets a bit of a breather at the second. The hole plays downhill and usually downwind, making it play even shorter than the yardage. Frequently a longer hitter finds himself having to hit a three-quarter wedge to a green that is very well defended. 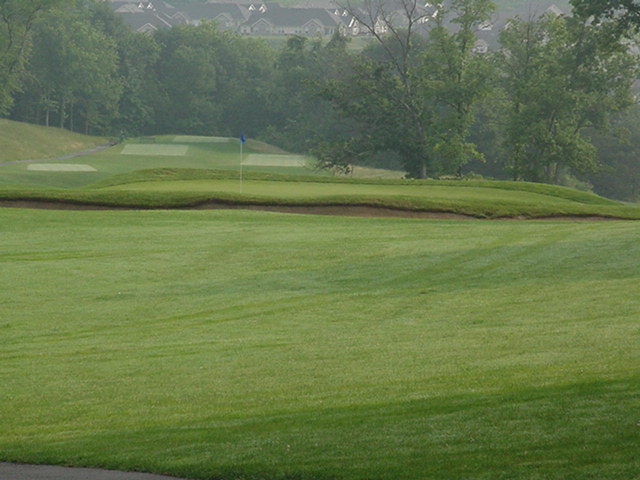 The bunker guarding the front of the second makes distance control a must.

The green is fronted by a large bunker and has smaller ones on each side. Only the very back of the green is visible from the tee. But, for all this trouble in front and to the sides, the worst mistake a player can make is going long. Balls over the green will frequently bound down a slope leaving a 30 yard shot from heavy rough back to the green. The green is probably the flattest among the old holes so a good tee shot can frequently yield a birdie. 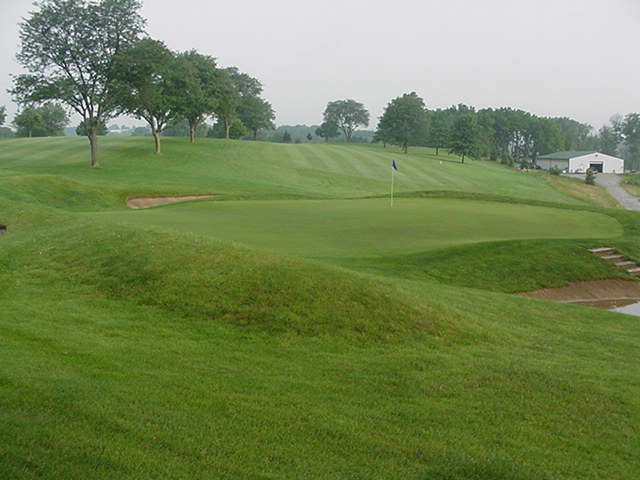 #4 â€œ 416 yards â€œ The fourth is the first of a stretch of three very good par 4s. The tee shot is to a very wide fairway. There is OB well to the right and a small stream runs up the left side. The best tee shot is over by the stream. The stream continues up and crosses in front of the green and along its right side. To the left of the green is a large hillside covered with thick fescue. The green is deep and narrow with the front third being severely sloped. The player who worries too much about the water can frequently pull a ball up onto the hill and have a very tough downhill chip with the one bunker on the hole and water threatening from beyond the green.

#5 â€œ 423 yards â€œ While #4 puts the pressure on the second shot, #5 definitely puts pressure on the tee shot. The stream from #4 continues along the left of the tee box and then runs up the hole, crossing in front of the tees. To the right of the stream is rough for about 230 yards and then heavy brush. To the left of the fairway, the hillside threatens with heavy rough and trees. The only bunker on the hole sits to the right of the fairway far enough out to only be a threat to the tiger. A tee shot aimed at that bunker with a slight fade is the preferred shot, but a pull or a slice will definitely not leave the player happy. The green sits in the open, with a small mound protecting the front center. The green features a large hump in the middle with drop offs to the front left, right and back right. On the back left is another large hill. This is one green where missing on the shorter side is definitely better than having to chip across the green. 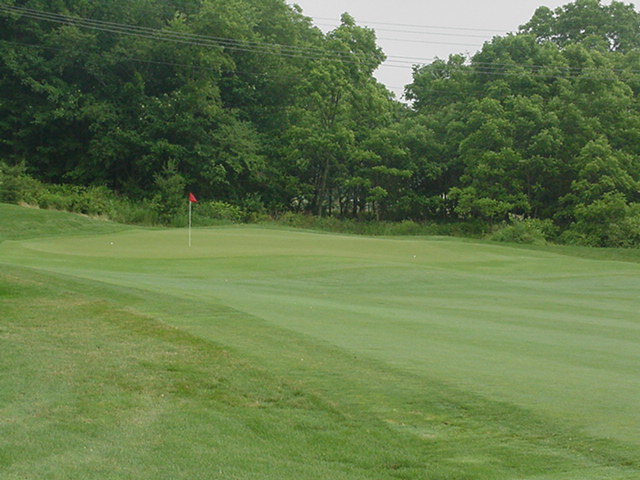 The fifth green, the little knob front/center can have a big effect.

#6 â€œ 402 yards â€œ The final hole in the three-hole stretch of good par 4s turns back the opposite direction of 4 and 5 on the hillside above them. It requires a draw off the tee to a fairway with three bunkers down the left and one to the right. The green is small and protected by one bunker on the front left. Again, it is highest in the middle and requires a precise iron shot.

#7 â€œ 240 yards â€œ The longest par 3 on the course plays downhill over a small gully to a green that has no bunkers. A deep chipping area to the right and a drop off to the left with water well below require the player to hit a straight tee shot. A trough runs through middle of the green from the left side. The back portion of the green is fairly flat, but the front is very steep, almost a false front. 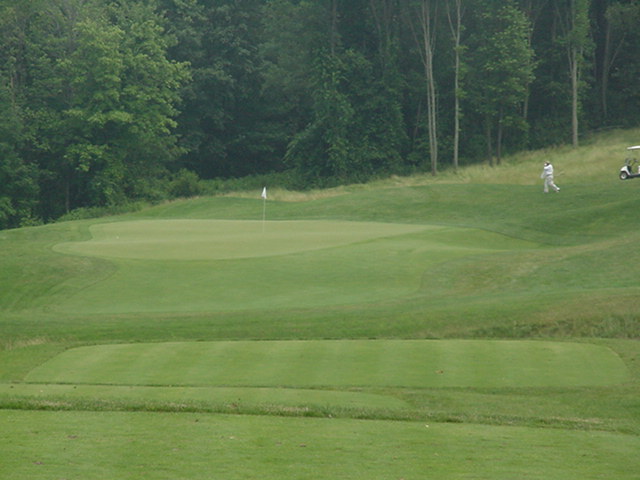 The seventh drops off severely to the left, but right is no bargain either.

#9 â€œ 410 yards â€œ This is the return to the older part of the course. The hole plays gently downhill from the tee to about 175 yards. At that point, a steep sided gully cuts across the fairway. It rises back up at 120 yards and continues slightly downhill to the green. The gully is about 10 feet deep so a player who is in the middle of the fairway 150 yards from the green has a blind second shot. The green slopes severely to the rear. The front left is the high point. Shots hitting the green usually run all the way to the back where a small mound covered with rough awaits the shot that is too long. A bunker up the hill on the left is the worst place to miss while a small one on the right leaves an easy recovery. In general, the player wants to run the ball onto the green, but if the second shot is not struck solidly enough, the third from just in front will usually run well past the hole. 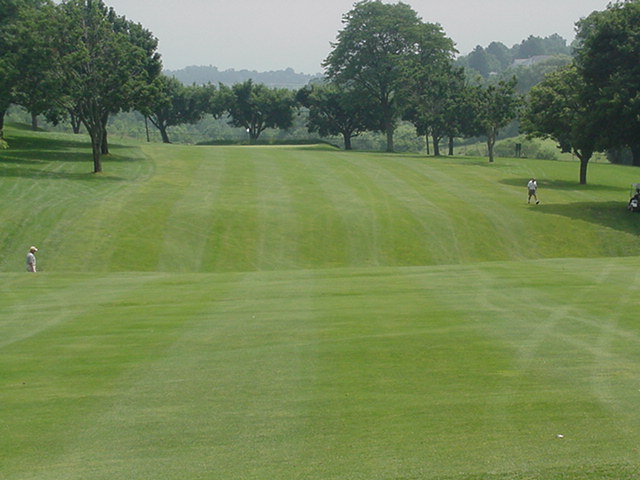 The ninth allows some big hitters carry the valley, but those who don’t face a blind second.

#10 â€œ 345 yards â€œ Ten plays back the opposite direction to #9, over the same gully. In the case of #10, the gully is all rough and the player definitely doesn’t want to go in there. The hole doglegs left and then goes up to the most interestingly contoured old green. The tee shot is usually a layup with a long iron or fairway wood short of the gully and the second is from a downhill side hill lie to the green which is above the player. The green has a little shelf on the left and a small hollow at the front. The back is very steeply tilted. 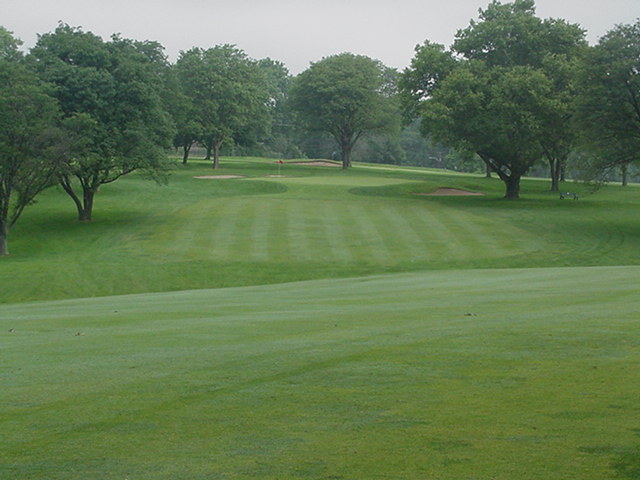 While the second to ten is only a short iron, it is complicated by the stance and the small green.

#11 â€œ 231 yards â€œ This is a typical difficult Loeffler long par 3. All his courses in the Pittsburgh area feature one very long (especially for the 1920s) par three with a difficult green. The features of this hole are a semi-blind tee shot over a slight rise and a green which slopes away from the player to the back right. One large bunker is on the left. Many of the members think this green should be blown up which probably means it is a good one. 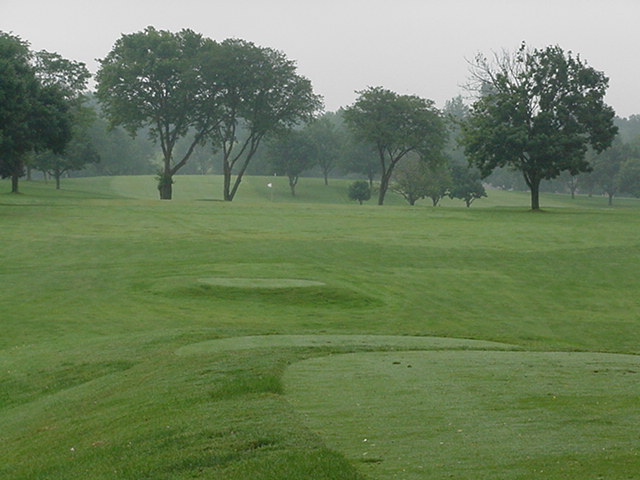 The tee shot at eleven doesn’t give many hints to the shot required.

#12 â€œ 522 yards â€œ The 12th hole is the second par 5 on the course and the shortest. It is the only par 5 that was on the original course. The hole plays as a slight dogleg left and the tee shot must be in the right side of the fairway to go for the green in two because of the trees down the left side. The green is a long almost two tiered green that slopes severely from back to front and left to right. There is a bunker on each side of the green with high lips built up in front of them. 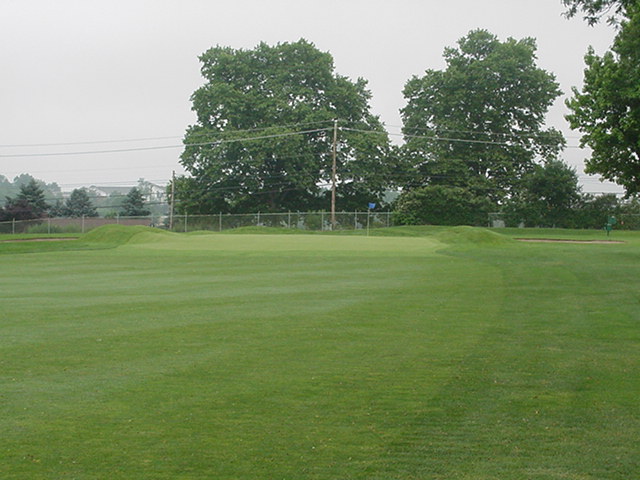 The twelfth is reachable, but the green and bunkers don’t make birdie easy.

#14 â€œ 583 yards â€œ This is the final par 5 on the course. The tiger can hit his tee shot through the end of the first fairway and leave a downhill second from rough. The second is over a valley and leaves an uphill third shot to a green the has a slightly flatter area in the right rear and tougher hole locations in the front and left. 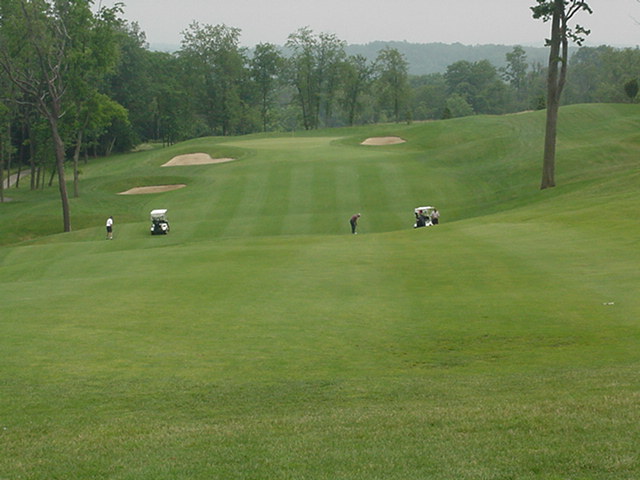 Fourteen as seen from the end of the first fairway.

#17 â€œ 438 yards â€œ The 17th is a strong par 4 that requires a long tee shot to the top of a hill in order to see the green on the second shot. Most players can’t reach the top and have a blind second over the hill to a green that is open in front. The green has a false front and balls on the left run off it. 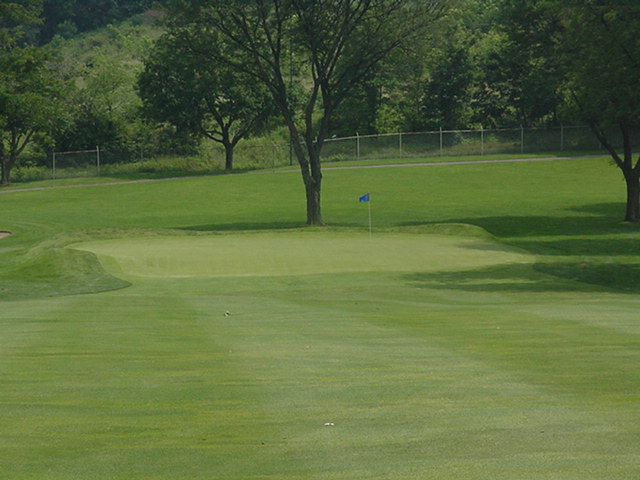 Seventeen as seen by only a few on their second.

#18 â€œ 423 yards â€œ The 18th borrows another feature from Oakmont. Like the 9th at Oakmont, the putting green is a part of the green. Unlike Oakmont, the putting green is on the side of the green rather than behind it. The tee shot is blind back over the hill that couldn’t be carried on #17. This time the carry is easy and the tee shot bounds down the hill making the hole play shorter than its length suggests. But, the fairway also slopes to the left so a drive that isn’t in the right side, will frequently end up in the left rough. The green is sloped at least as severely as #1 so being short of the hole is a good idea. 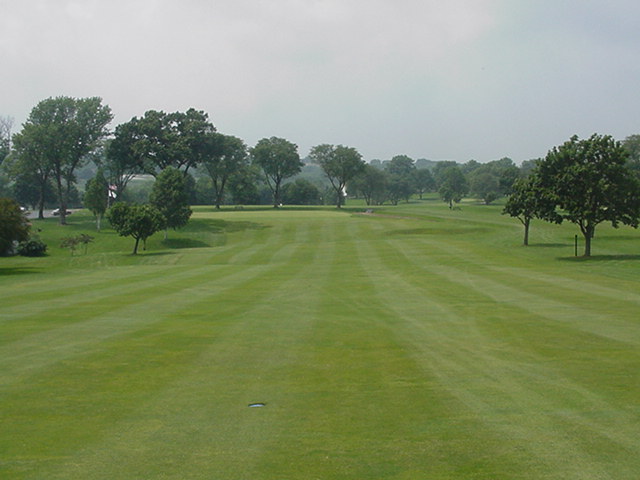 Tee shots on the closing hole should be down the right to stay in the fairway. The putting green is protected by the trees on the left. 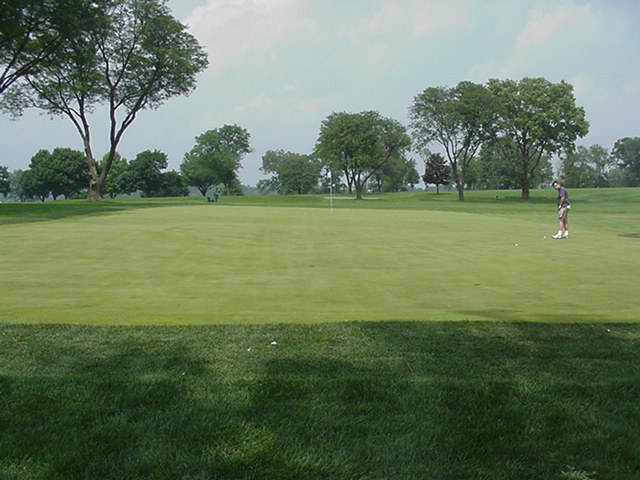