Views From the Driver’s Seat

Anticipation is the one inevitable experience when visiting a course for the first time. Subsequent visits may provoke strong reactions, but that first time is always special. The entrance sign may come first, perhaps a gate and once through, the slow drive to the clubhouse. Other times, the golf course is visible well down the road or even from the plane, boat or train platform. Some entrance drives, such as the one at Cape Arundel, ME (below) pass across or within sight of most of the holes. Others reveal nothing until the clubhouse comes into view, and even then, still not the golf course. 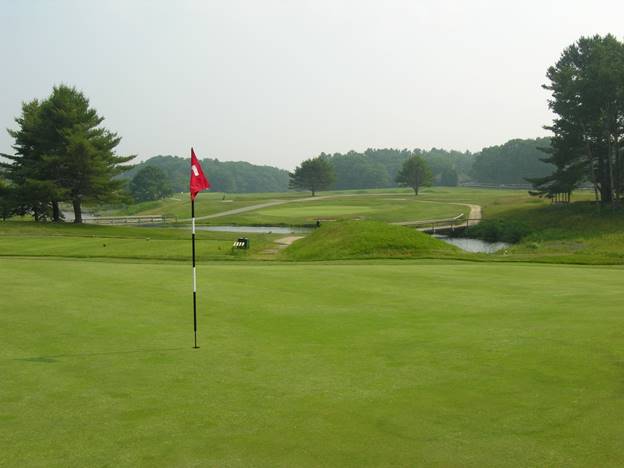 There is the majesty of Myopia’s .6 mile drive, where the golf course and classic yellow of the clubhouse only come into view after having passed bridal paths, stables and the polo fields forever immortalized in the original version of The Thomas Crowne Affair. The best part of that sequence is undoubtedly the parked touring cars. 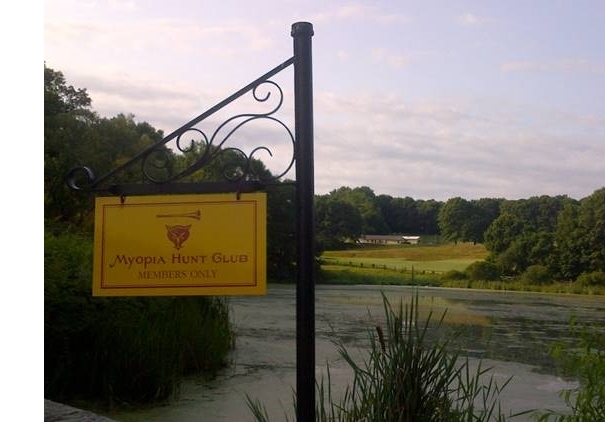 There is certainly the appeal as the gate rises and one drives across the causeway to a private island such as Gibson Island in MD or Indian Creek in FL. Gibson Island’s causeway is visible from the first green (below). 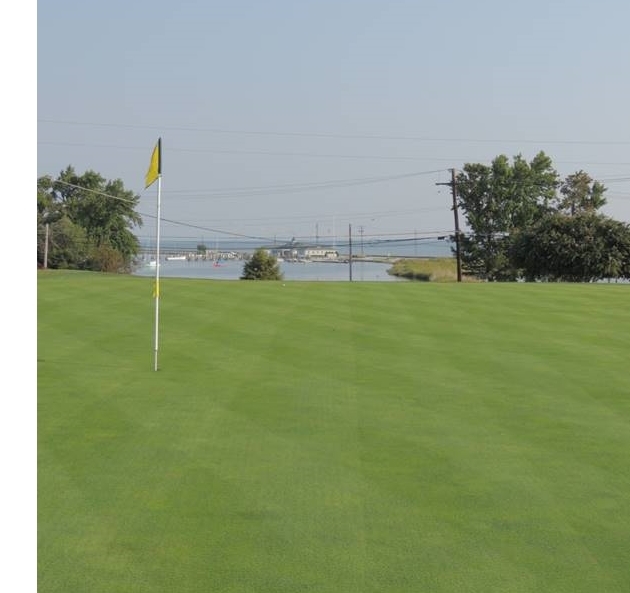 The “entrance drive” experience may arguably start as early as when boarding the ferry in places like Rockland, ME on the way to North Haven Island, or in New London, CT. Sometimes the golf experience begins when the course first comes into view as with NGLA. By that point in the drive, one has already driven past Shinnecock’s clubhouse and seen several holes of that course, but the crescendo is clearly after passing through the gates with the windmill to the left and Peconic bay on the right. 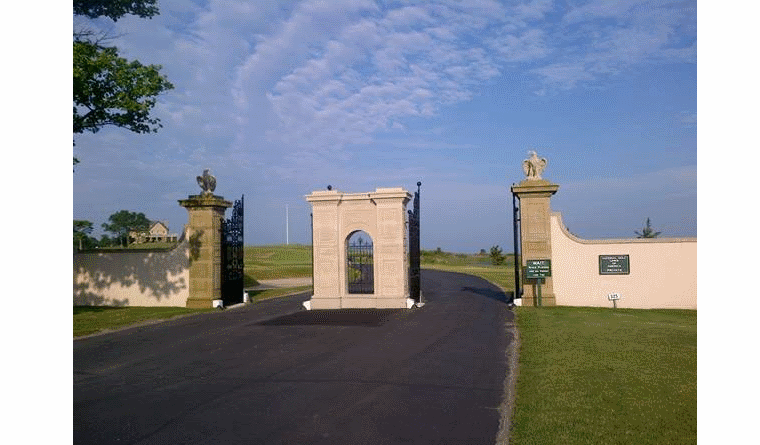 The straw man at The Country Club’s guardhouse still sits tall. Followed by the crossing of #15, site of Matt Fitzpatrick’s final shot during the 2013 U.S. Amateur and within sight of several of Mr. Ouimet’s arguably most famous holes played out a hundred years earlier. Then the slow roll past the clubhouse and onto the oval, reminiscent of a New England village common.

Among my favorites in terms of conveying the club’s essence is this one below: If you’ve played there, you’ll know what I mean. 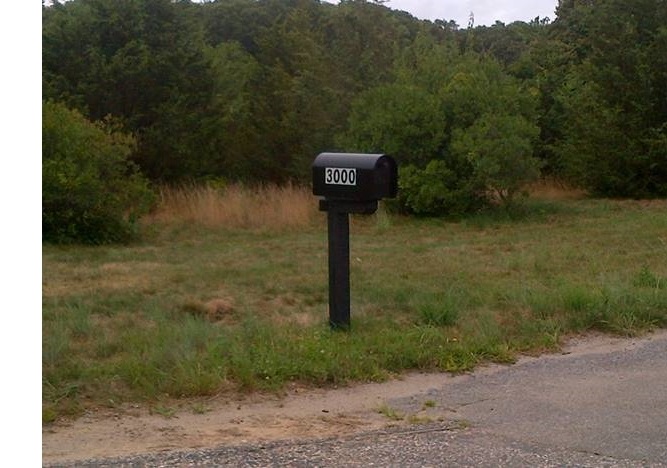 Many involve a rail crossing as with Yeamans Hall. While enjoying that long drive on the way out, I heard the distant train’s horn and then just lingered a while until it passed. 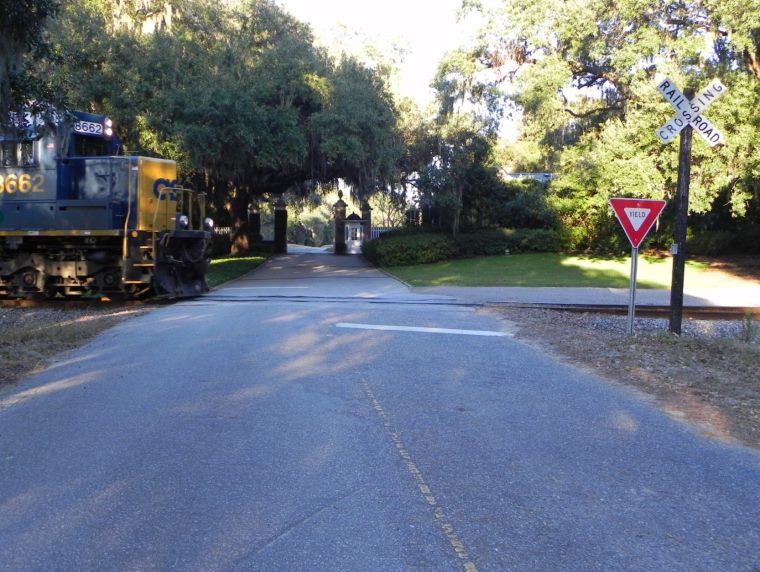 Bandon Dunes’ entranceway used to run over 2 miles before there was any evidence of golf; it’s a bit shorter now to get to that point with the location of some of Bandon Trails’ holes. Well away from either coast is the meandering 15 mile single lane dirt road to get to Dismal River. Nearby (as the cowbird flies) Sand Hills has the true remote feel that comes with 16,000 acres in the middle of Nebraska, and Northeast Colorado’s Ballyneal also seems to have risen from the silos. 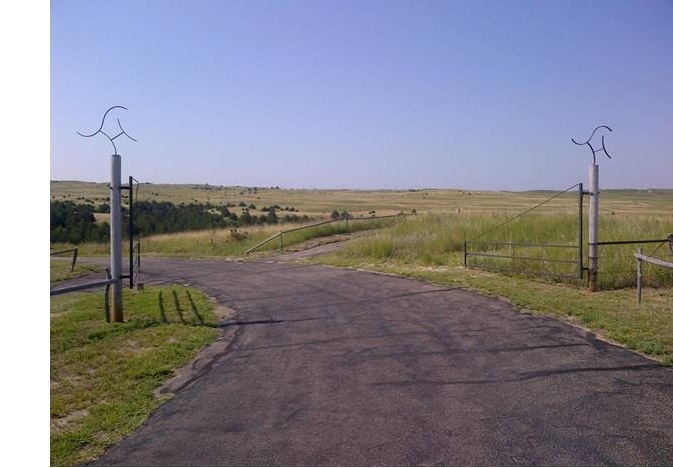 Winged Foot has 2 entrance drives, my preference being the North Gate which offers a glimpse of several East Course holes. 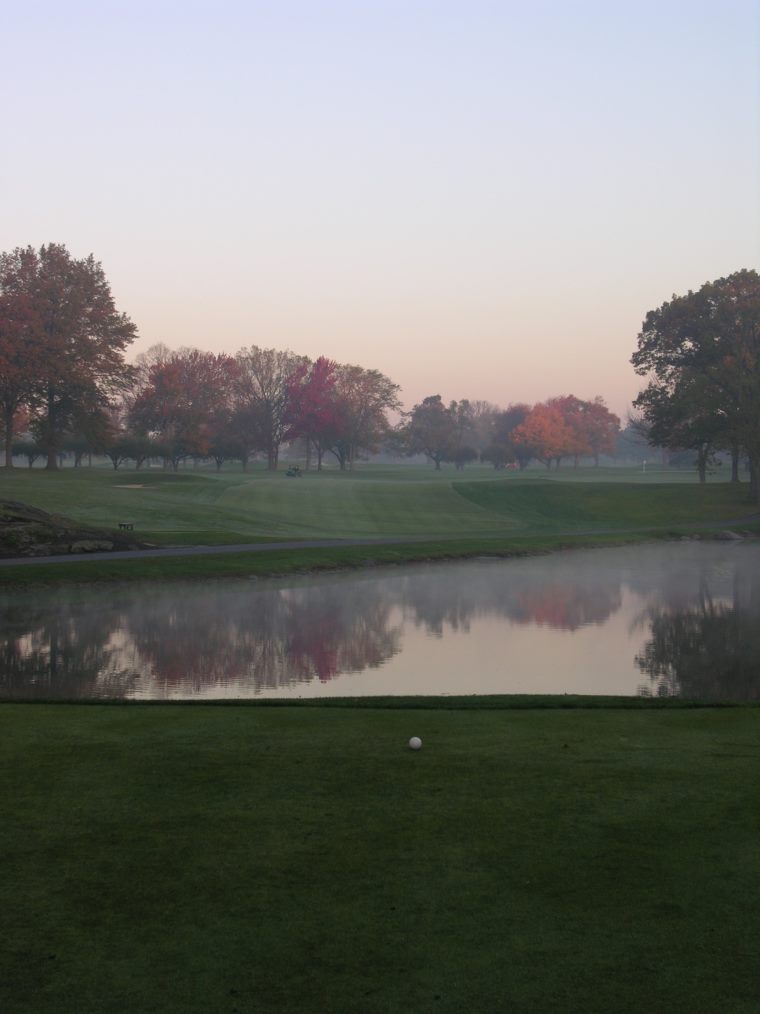 Some course architects have even lived on entrance drives; Dick Wilson’s former home is sited just before the clubhouse on the way into Pine Tree in FL. Another fine example is The Creek Club in Locust Valley, NY with its wonderful rows of Locust trees crossed on the way to the 4th tee. Sadly, many came down during Sandy. 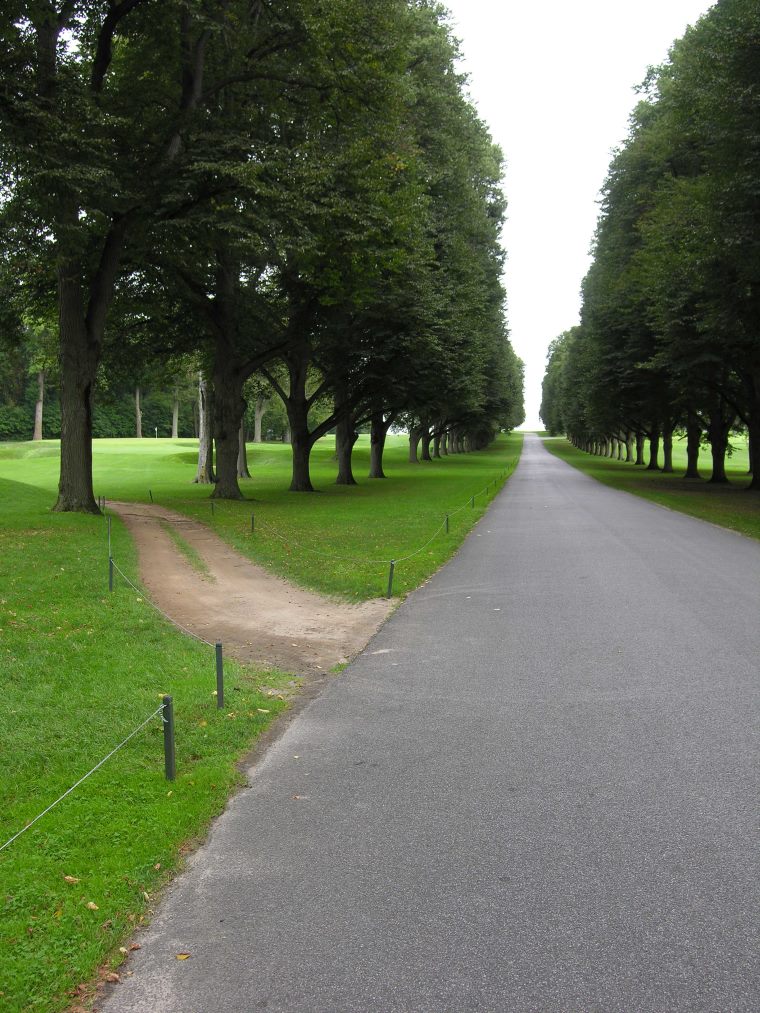 Then of course there is Scotland, where the whole town can be an entrance drive, as with Brora and nearby Dornoch. 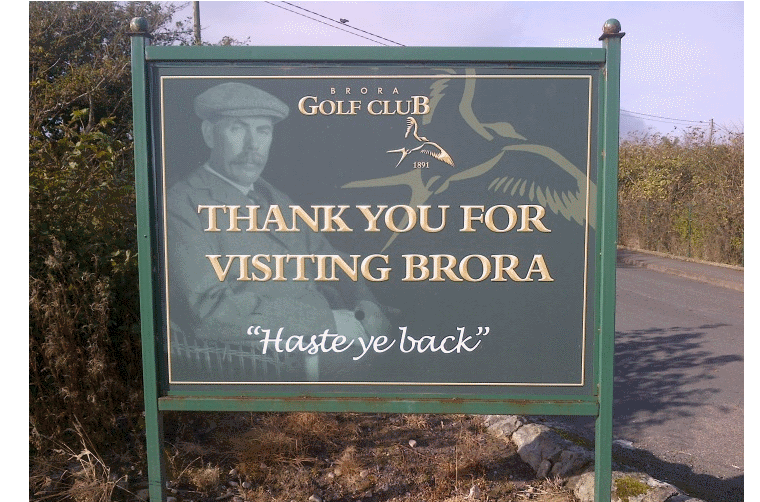 Some relatively short entrance drives are wonderful simply by virtue of what comes next. 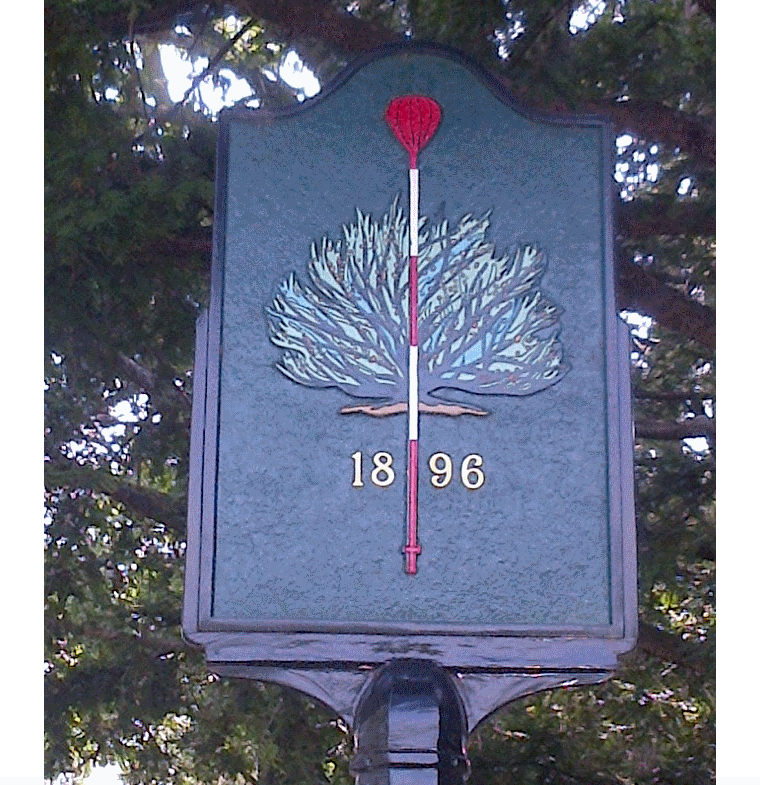 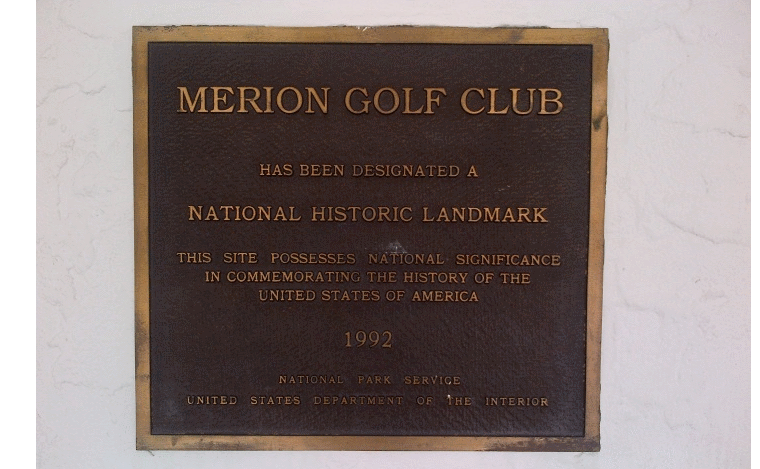 A pedestrian approach often makes the gate that much more special. 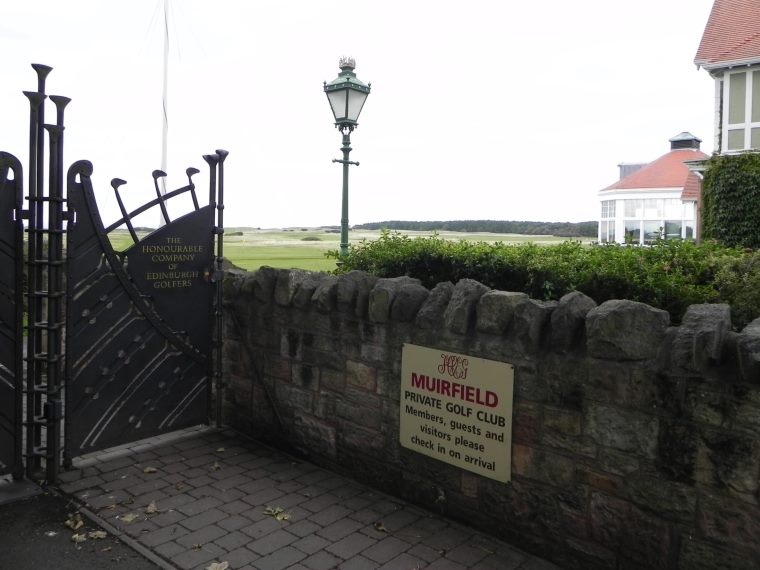 Some are gaudy as one would expect at a Trump course. One can just imagine the residents of a small Italian town waking up one morning and wondering where their fountain has gone. 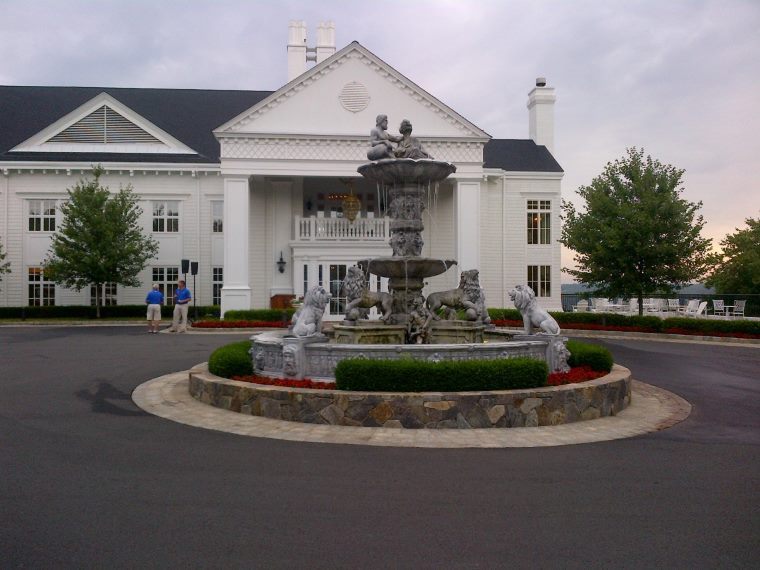 Some signs convey a simpler sense of place or perhaps a warning not to stray far off the assigned path. 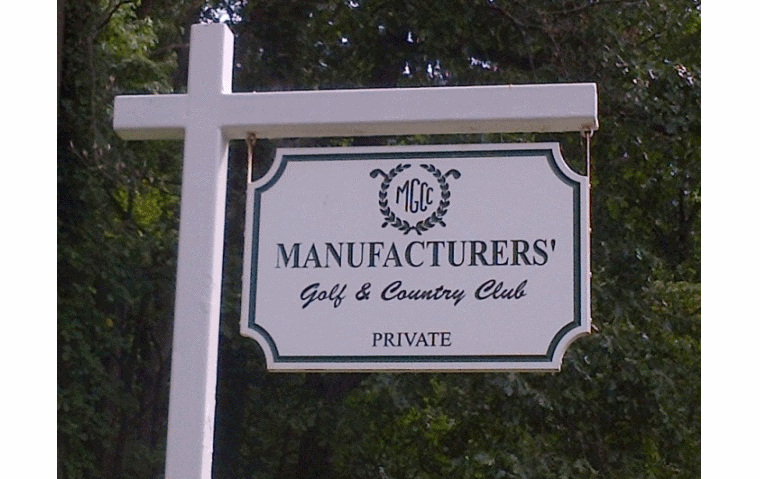 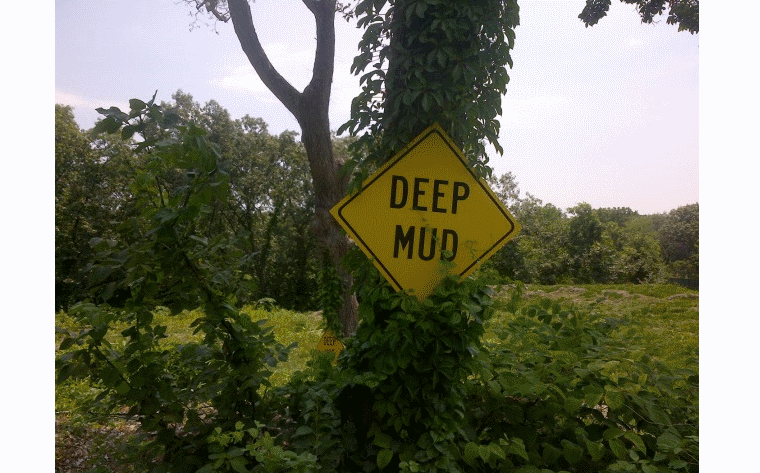 Some clubs, even those of extremely high stature like Garden City GC, simply have no entrance drive at all; one just turns into the parking lot directly off a busy street. There is of course Pine Valley, which is in a class of its own, what with the amusement park and all. Consider also the Grande Allee of Augusta National which exits onto a busy thoroughfare opposite a strip mall clearly past its heyday. Talk about a poor transition back to the real world.

Wayne Stiles, who was a landscape architect before his career as a golf architect, and A.W. Tillinghast, were fully cognizant of the importance of clubhouse siting and the visual approach. Stiles, on his 1922 Planting Plan for the 36-hole Norwood Hills CC in St. Louis, shows the drive winding past over a dozen holes before exiting on the far side of the property.

I’ve enjoyed picnic lunches, stopped to read, logged into my work email, or even taken conference calls, all while still somewhere between the golf course and the street.

My home is an entrance drive of sorts; portions of Brae Burn, site of the 1919 U.S. Open, come into view as I drive around the house to the garage.

My personal favorite: the next one I drive into wherever that may be.