In 2005 the DuPont course at DuPont country club was closed down for a complete renovation. The existing routing would be kept but holes would be changed and lengthened. Lester George was hired to carry out the renovation. Mr. George’s goal was a sympathetic renovation of the course. He utilized the original routing and plans of Alfred Tull and reintroduced the concepts and strategy in Tull’s original design while creating several new challenges that fit in with the spirit of Tull’s design. George expanded and rebuilt every green, widened every fairway, and rebuilt and added tees. The transformation of DuPont is a compliment to George and his ability to utilize bunkering and angles of play to create new and challenging golf holes from an existing routing.

1. The effect of a good renovation is immediately apparent on the first hole. George introduced strategy to the hole by moving the green back and to the left and building fairway bunkers on the left and right. The opening tee shot requires the player to hit it down the right side in order to have a view of the green, but in doing so the player sacrifices distance for their second shot, so from the opening of the round you are confronted with the choice of angle versus distance. 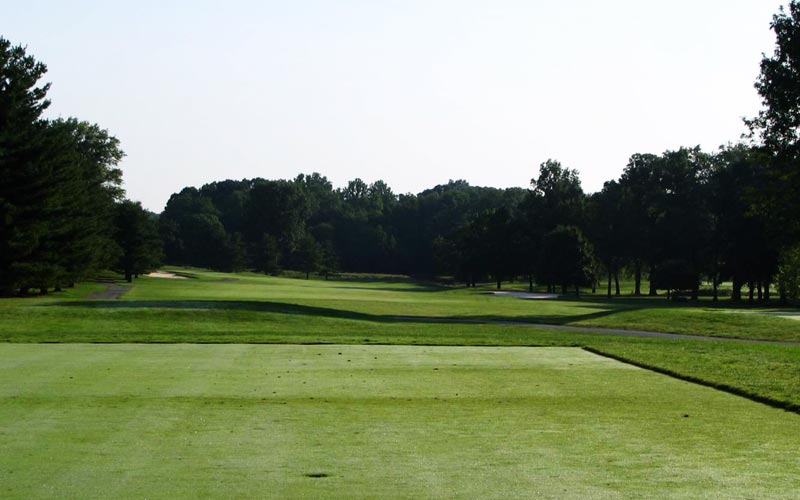 The first hole before the renovation. A very straightforward dogleg left. 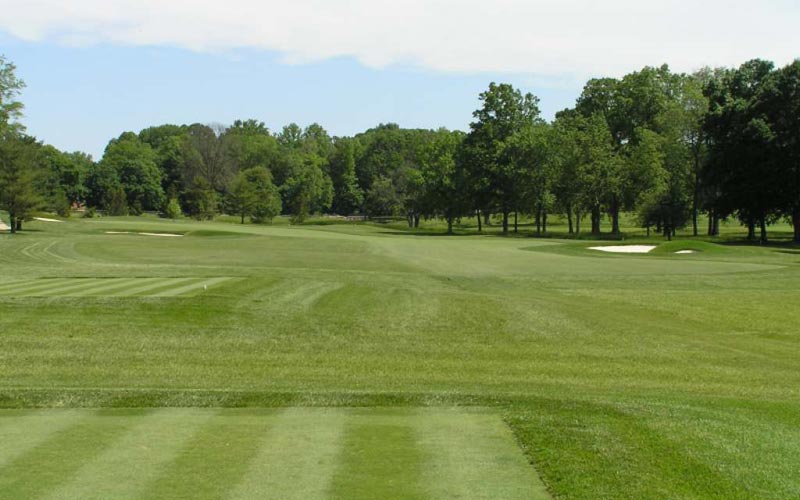 The golfer’s view from the first tee box. Challenge the bunker on the left and you are rewarded with a shorter shot into the green but fail and your angle and shot are very difficult.

2: The most controversial hole to come out of the renovation is also the #1 handicap hole. George forces the better player to cut as much as they can off the dogleg and challenge the bunkers on the right to give them a shorter approach and a better chance to hold the green which slopes severally from front to back. The front right hole location here is the hardest on the golf course. 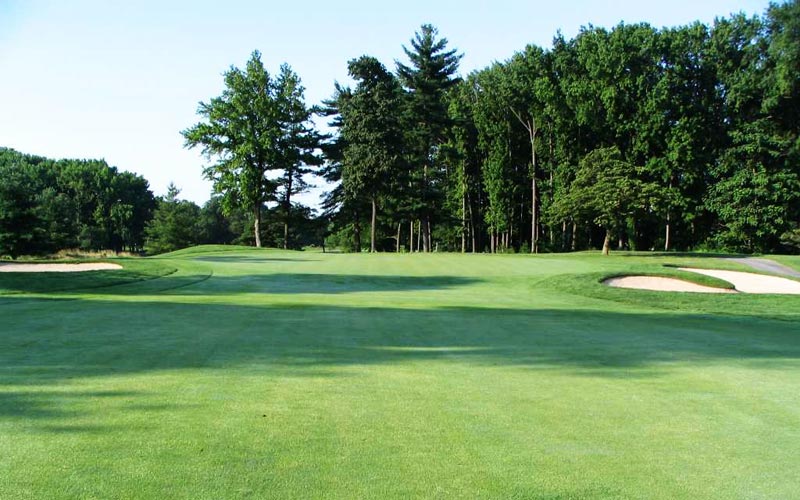 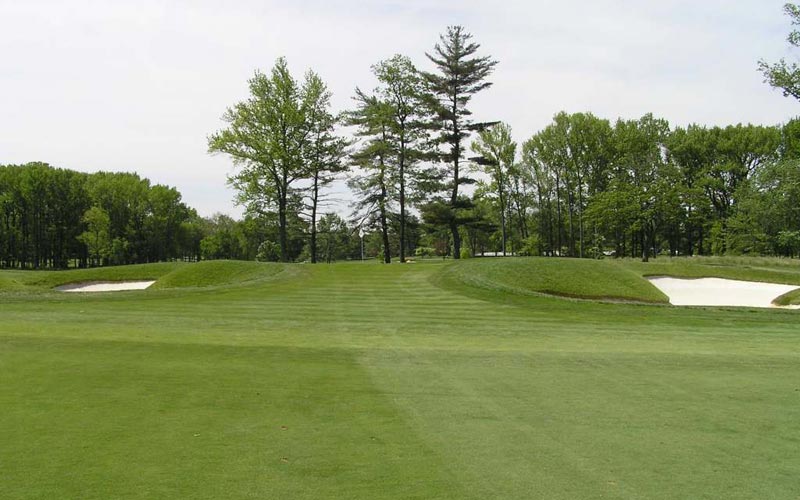 The second green today, with it’s raised front. One of the few holes at DuPont that requires a high lofted approach shot.

3. Normally when a water hazard is removed, people believe that the hole will become easier. This is not the case at DuPont where a pond on the left hand side of the fairway, which was easily carried by most good players, was replaced by several bunkers. The deep bunkers now require better players to play down the widened fairway to the right or face the possibility of having to sacrifice a shot in getting out of a bunker if they fail to cut the corner. 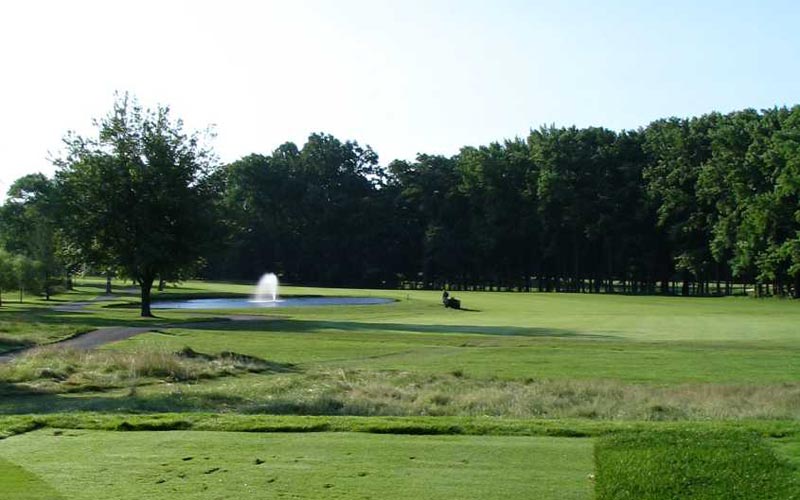 Number three with the pond, before the renovation. 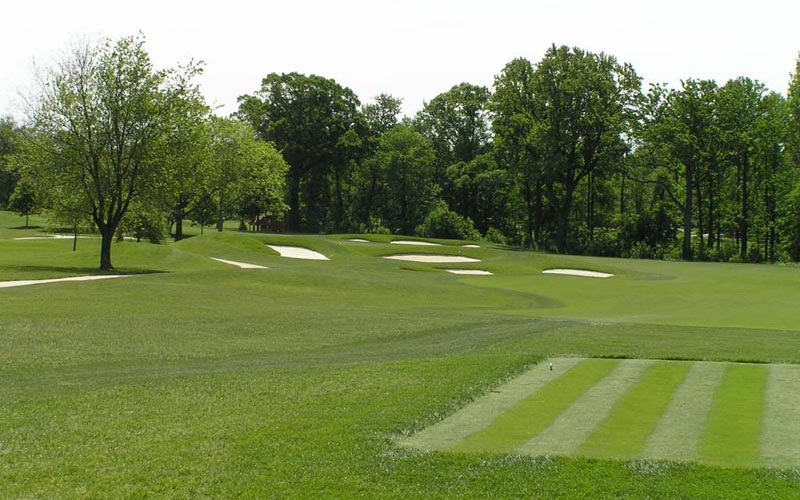 On the third hole the player must decide how much of the angle he should cut off in challenging the bunkers on this dogleg left.

4. After surviving the first three holes, the fourth gives you your first real chance at birdie. A bold tee shot down the right side of this dogleg right is rewarded with a wedge shot into a very undulating green. The higher handicap player is given ample room off the tee and a wide open green in which to run the ball up.

5. One of the interesting aspects of the original routing by Tull is that three of the par threes; 5, 8, and 13, all play the same direction so players don’t get to experience a variety in wind direction. The fifth was improved by moving the green to the right, adding depth to the bunkers, and expanding the green.

6. The only blind tee shot on the golf course comes at the sixth where the player can’t see their ball land nor can they see the newly placed bunkers left and right that await a wayward tee shot. The most interesting part of this hole is the green. George created a small mound in the right side of the green that creates many interesting hole locations and require precise placement of a short approach shot.

8. Elements of a reverse redan can be seen here at the 8th hole. A recontoured green that slopes from back left to front right and newly shaped bunkers on both sides of the green make this long iron par 3 a challenging hole for players of all skill levels. 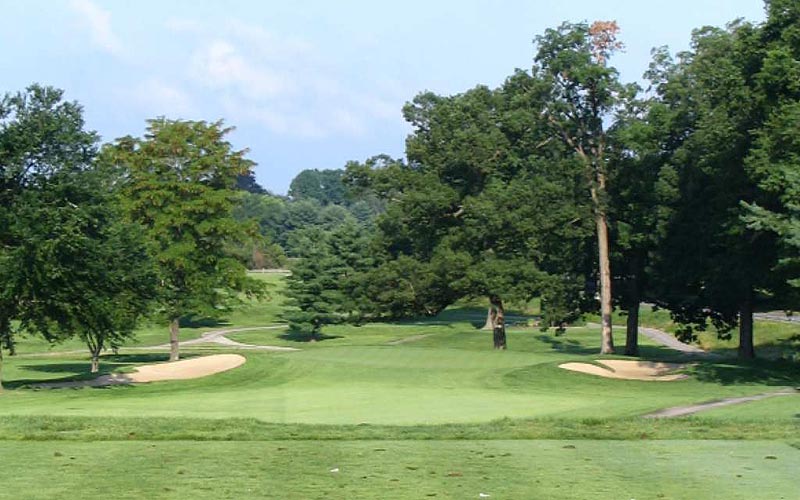 The eighth hole before the renovation 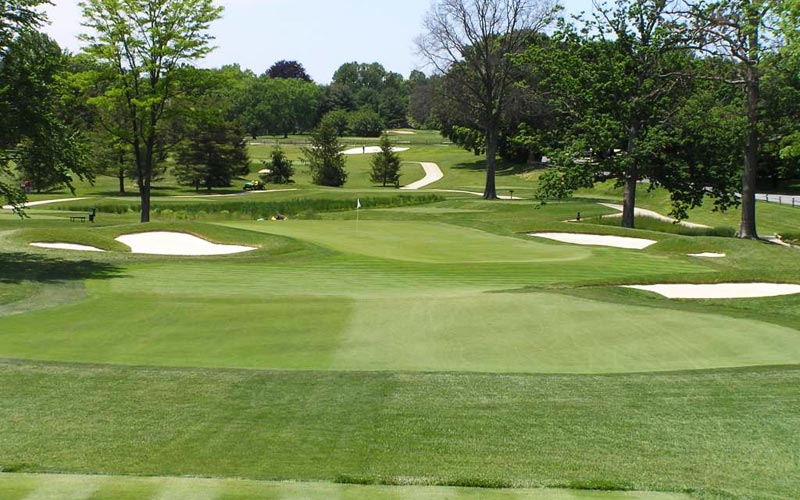 9. The ninth hole at DuPont is a true three shot Par 5 because of the almost 90 degree dogleg the player encounters off the tee. George introduced strategy to the tee shot by adding bunkers in the landing area that force the player to carefully consider their tee shot rather than bombing away and not having consequences for hitting through the fairway. An elevated green and a newly created false bunker that appears to be greenside, but actually sits 35 yards from the green, make this hole a well deserved birdie for the player that executes their layup and approach shot. 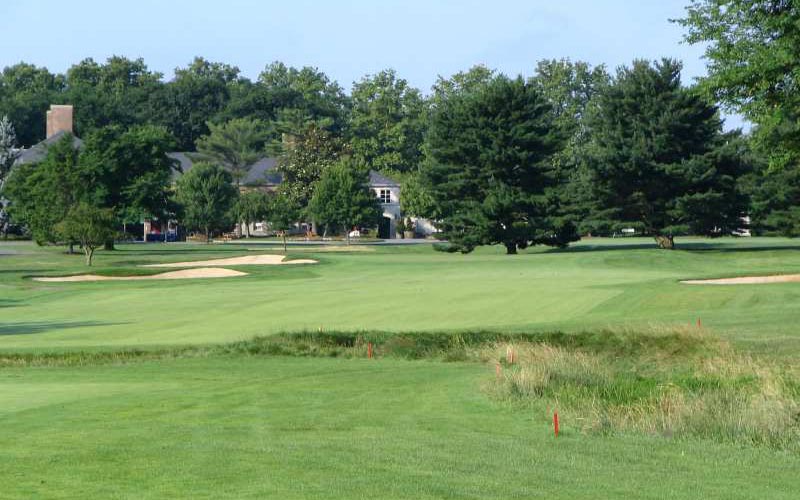 This shot from the fairway of nine shows what the player faced in laying up before the renovation. 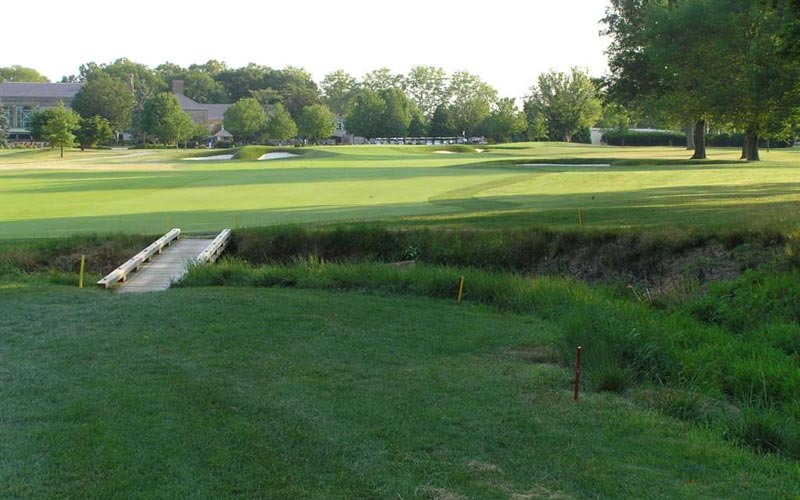 Now the layup on the ninth has become more strategic because of the enlarged green and newly created bunkers.

10. The back nine opens with an easy mid-length par 4 that rewards the player that places his tee shot at the proper angle to attack the pin on this undulating green. George introduced more pinable area in the front half of the green by moving it back away from the creek and reducing the slope. The green features two distinct levels with the front level sloping from back right to front left, and the back half feeding off to the rear right portion of the green.

11. A par 5 improved dramatically by the addition of fairway bunkers both left and right off the tee that requires the player to place both his tee shot and second shot in the right place in order to have a chance at birdie. 70 yards of added length also make this hole much more challenging for the better player. 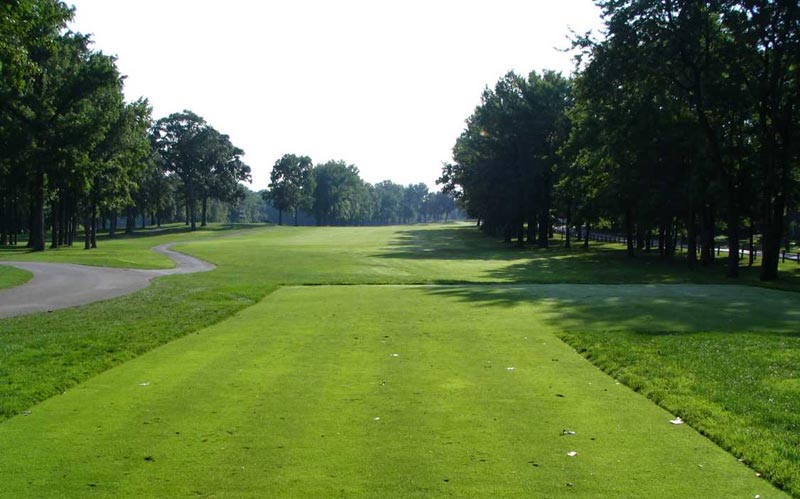 Eleven before the renovation. Notice the absence of bunkers. 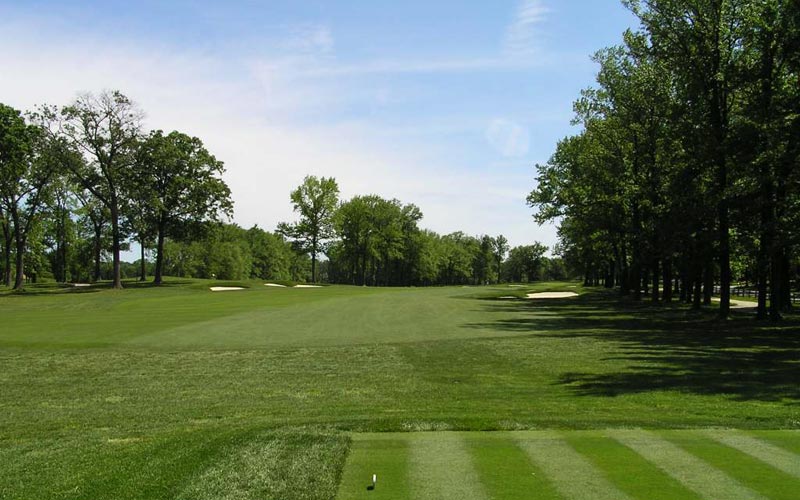 The eleventh hole is now a strategic par five with the introduction of bunkers in the drive and layup areas.

12. A short par 4 improved by adding and relocating bunkers to take the driver out of the hands of the better player. The long narrow green that slopes from front to back and newly deepened bunkers around the green provide an exacting challenge for all players.

13. A do or die long par 3, this hole plays uphill and into the wind and usually requires a fairway wood or driver for even the longest of hitters. Deeper bunkers and the removal of pine trees behind the green encourage the player to error long rather than short, but the shorter hitters still have a chipping area in front on the green to give them an opportunity for par.

14. The removal of trees down the left hand side of 14 and the widening of the fairway make the hole more inviting off the tee, but the introduction of strategically placed bunkers push the player down the right hand side of the fairway where they must play a high lofted shot to a well bunkered green.

15. The most improved hole on the golf course is also the one many consider to be the best. George turned a mid-length Par 4 into the best long Par 4 on the golf course by moving the green behind the creek and to the right. He also introduced new fairway bunkers on the left side to force the player to challenge the creek down the right to have a shot at reaching the green in two with a good angle. George also had the vision to create a lay up area short and right of the green to allow the higher handicap player an opportunity to make par with a well executed pitch. The creation of this green solved two problems in the mind of the architect. It turned a mid-length par 4 into a true test and it also allowed the 16th tee to be moved back and the angle changed to make it a much better tee shot. 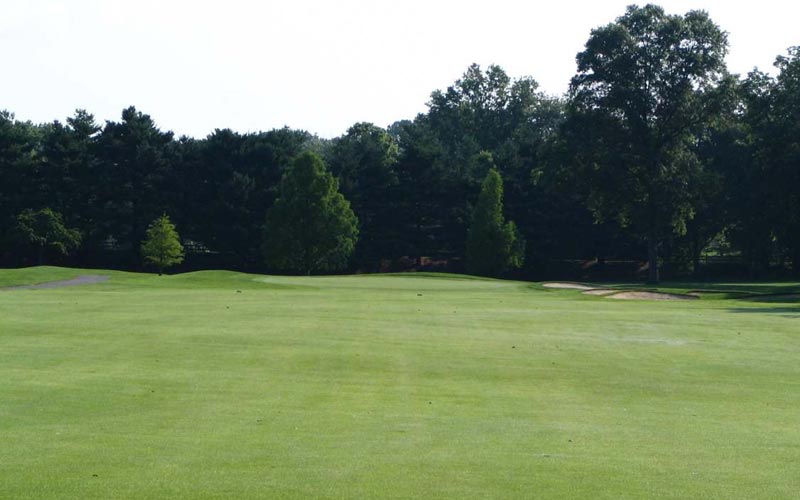 A shot of the fifteenth hole before the renovation. 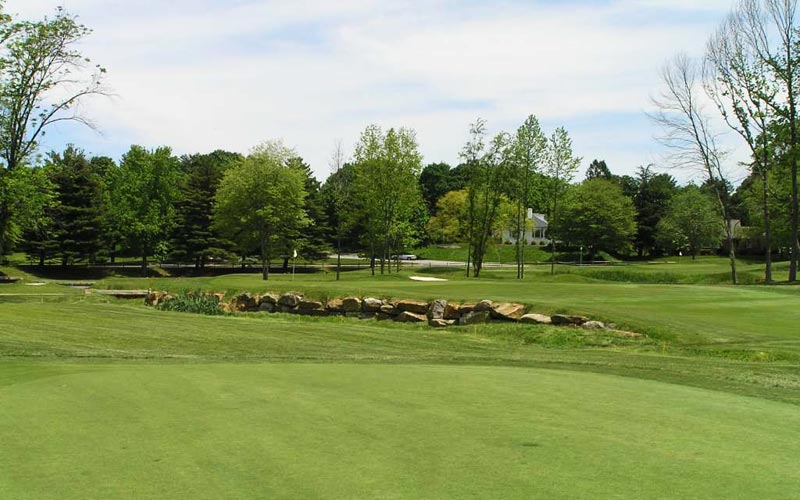 The fifteenth hole today. The most improved hole on the golf course, and the favorite of most people who regularly play the course.

17. The shortest par 3 on the golf course features a green with two distinct tears. The front and middle portion of the green are contoured from back to front, while the back right portion of the green slopes front to back. When the hole location is back right a truly heroic shot is required to get close enough for a birdie opportunity.

18. A classic risk/reward hole with outstanding strategic use of a tree is what confronts the golfer on the final hole. The bold tee shot down the narrow left fairway is rewarded with a much shorter second shot while the safe play down the right fairway must be hit far enough to ensure no tree problems on the second shot. The combination of the bunkers on the left, the creek bisecting the fairway and the tree between the two fairways make this an outstanding finishing hole!! 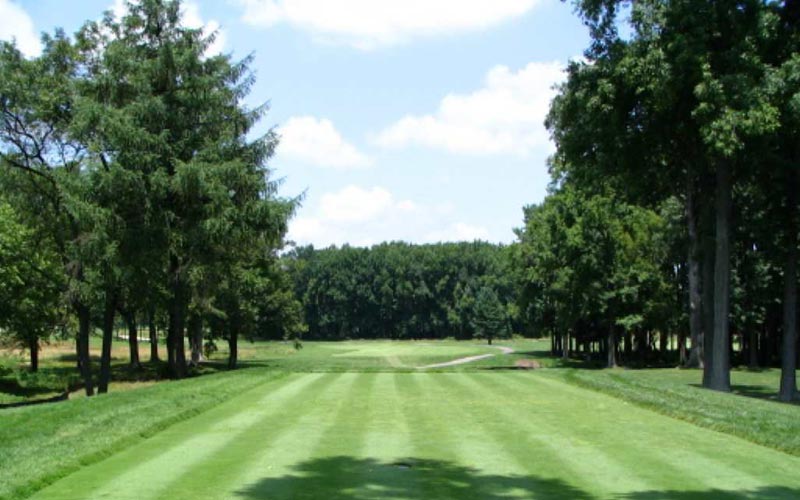 Before the renovation, the finisher presented a very straight forward, tee shot. 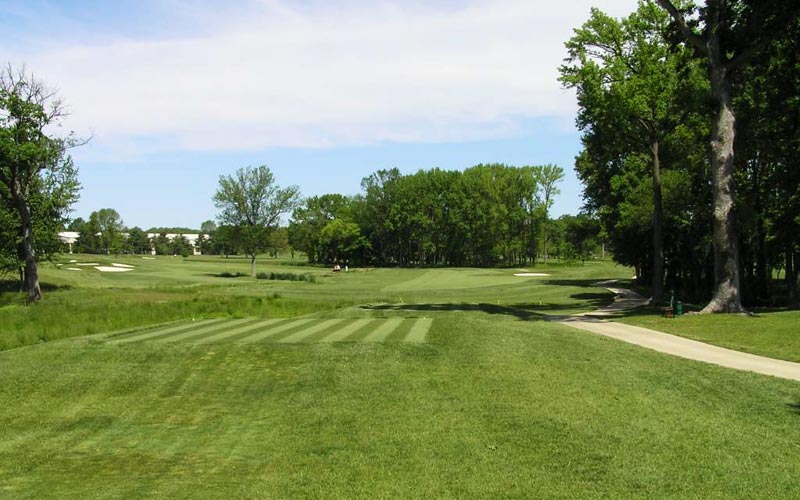 The closing hole. Great strategic use of a tree and split fairway on the tee shot.

The author would like to thank Lester George and John Gosselin for their assistance.