Tom Doak is the president of Renaissance Golf Design in Traverse City, Michigan. Regarded as the leading golf course critic, Tom Doak is enjoying his finest year as a designer, with three courses opening in the middle of this year. Like his prior courses, each one is highly individualistic. His work is notable for the routing of the holes over the land and for interesting (!) green complexes. Tom spends a lot of time on site and his courses are worth seeking to play.

1.What three architects’ (past or present) body of work do you admire the most?

a) Alister Mackenzie – for never giving in to convention
b) Pete Dye- for variety of his work 1965-1985 (not lately!)
c) Bill Coore – for building his courses to the needs of the client, rather than for top-100 polls

2. Is there a feature from the Golden Age of architecture that you think is missing from course design today?

What’s missing most from modern golf course design is unpredictability. In the old days, when you had a severe feature within the property, how it was used determined the character of the design. Nowadays, most architects either erase it with a bulldozer, or route the cart paths around it.

3. If time or expense weren’t considerations, which five courses would you most like to see for the first time?

4.What is the range in width of the fairways you have built? Of green sizes?

I think Stonewall has the narrowest fairways of anything we’ve built -30 to 38 yards – and it certainly has the smallest greens (maybe 5000 square feet average, some down to 3500). The Heathland Course at The Legends has the largest greens (probably 8000 square feet average, and the only three I’ve ever built over 10,000). We’ve built a lot of wide fairways – The Legends might be the widest, but Harbour View and Apache Stronghold are right up there. 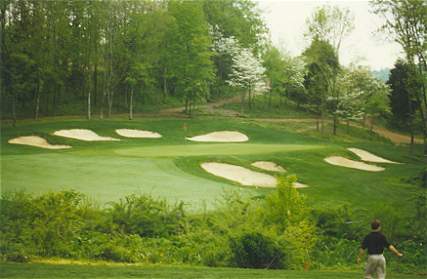 The small fourth green at Stonewall, wth the architect in the foreground.

5.If a developer approached you and said his ideal course would be a 6,300 yard, par 69 course, would you think?

a) He must be related to Marion Hollins
b) Finally, a guy who knows what golf is all about
c) I hope I build a course as good as Swinley Forest
d) Wonder if I can keep my fee the same?
e) All the above

E, all of the above. I’d also be hoping he had good undulating property, so that we could find enough short par fours to justify staying that short.

6.What is the least amount of dirt you have had to move? Which course?

A tough one. At High Pointe, Wilderness Valley, Beachtree, and Apache Stronghold, the only ‘cut’ was to build an irrigation lake: 25,000 to 50,000 cubic yards. Shaping is harder to quantify, but High Pointe and Apache probably have the least amount of reshaping in the fairways and greens.

7.How do you think this period in course architecture will be viewed in fifty years time?

Fifty years from now, we’ll look back on this period of golf architecture as a manic free for all, with some excellent work, some horrible atrocities, and a lot of quality-built high end projects which never paid off. Hopefully, it won’t be the last hurrah -ten years ago, I remember saying that I hoped my career wouldn’t consist of trying to fix Tour pros’ design mistakes.

9.Tell us about your projects that are opening this year. What is the most exciting feature in each?

Lost Dunes in Bridgman, Michigan, is a private club with some of the most severe greens we’ve done. Every hole has at least two or three distinct pin placements which make you think about a different line of attack or type of approach shot.

There are numerous ways to play the second at Lost Dunes

Riverfront Golf Club at Harbour View in Suffolk, Virginia has more dramatic tidal marsh footage in play than any course I’ve seen in the southeast. But it was also the most gently contoured site we’ve ever employed our minimalist style to: the elevations for the whole course range from 12 feet above sea level to 20, and our biggest fill on the site was maybe six feet.

At Apache Stronghold, we only built about 40 artificial bunkers, but we also used the native desert washes as sand hazards, and patterned some of our artificial bunkers after them. It’s a great, rugged, natural look.

10.What course is a personal favorite (that you did not design) with which perhaps the readers may not be familiar? What do you like about it so much?

One of my favourites is Royal Worlington & Newmarket, the nine-hole course which is home to the Cambridge University golf team. The site isn’t particularly dramatic, and it’s so tight that the par-3 fifth hole plays across the line of both the fourth and sixth. But the greens are some of the best I’ve ever seen, and each hole has a strategic integrity to it. I don’t know of anyone alive who could build something as pure.

11. Which five courses in the world possess the most fascinating green complexes?

12.If you could only play golf in one area (Long Island, Monterey, St. Andrews , etc.) the rest of your life, which would it be?

Long Island, for its superior depth and variety. But if I could stretch the heathlands of London to include Rye and Sandwich, it would win hands down.

13.Excluding yourself, how many present day golf course architects’ work do you admire and whose work you make the effort to see?

Two. (Unfortunately, they’re partners, and only produce 1-2 courses a year.)

14.What is the most flattering compliment a golfer could pay you after a round on one of your courses?

‘That was fun. I can’t wait to play it again.’ Most flattering adjective used to describe my work: ‘cerebral.’

15.What is the ideal project? Describe the land, the owner’s mission statement to you, etc?

The ideal property doesn’t exist; there are a lot of variations that would work and no property can include them all.

The mission statement: we want a course our members will treasure, one that has a style all its own, but on the same level as the National Golf Links and Cypress Points of the world. We don’t care about exactly what the par and total yardage are. We don’t care about having tournaments, but we want even the best players in the world to find it thrilling and interesting to play. We want every hole to be distinctly memorable.

16.What are your five favourite links courses?

a) St. Andrews
b) Rye
c) Royal Dornoch
d) Royal Portrush
e) Machrihanish, because it may be the only unspoilt links left.

17.What are give away statements that an architect can make that let people know he has no idea what he is doing?

a) ‘I crumple up a napkin , and let that serve as a model for the green contours.’
b) ‘God meant this land to be a golf course.’
c) ‘The mounding I’ve employed is reminiscent of the great links in Scotland.’
d) ‘I let nature tell me where to place the holes.’
e) ‘This is a championship course ¦.’

C. Any statement incorporating ‘mounding’ and Scotland should result in the death penalty.

18.What five holes (from different courses) do you wish you could claim as being your own design?