Gary Planos started working for the Kapalua Land Company in 1984 as the Head Golf Professional of Kapalua’s Village Course. Since then, he has held numerous positions including Director of The Kapalua Club, Tournament Chairman of the Mercedes Championships and Vice President of Resort Operations.

1. How did the Kapalua Resort come to hire the (at that time) unproven design team of Coore & Crenshaw?

Mark Rolfing is a good friend of Ben’s and was a joint venture partner in the development of The Plantation Course and Estates. He brought Bill and Ben to Kapalua.

2. Describe the property with which they had to work.

They had a piece of property that was very unique with pineapple fields separated by two large gulches or ravines. 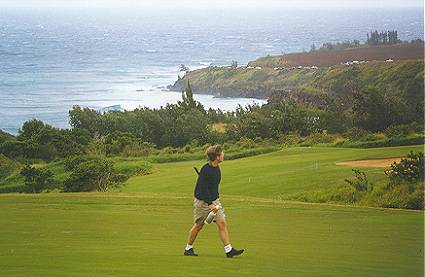 The sloping topography presented quite a routing challenge for Coore & Crenshaw.

3. What impressed you during the design phase?

Bill and Ben were very flexible and were great to work with. They changed the 14th hole to par four from originally designed long par three because they felt a short par four was better for the course compared to a long uphill par three. Thus, we became a par 73.

4. What do you recall from the construction process?

Both Bill and Ben were at Kapalua at least seven or eight times during construction and we always had lunch together. You will not meet friendlier people.

5. The property is severe and so can be the weather. How does the design ensure that the course remains playable and fun for all golfers?

There are very few forced carrys on the course so players of all levels can approach each of the greens with the exception of #8 (par three). It has definitely become the most popular course on Maui and probably Hawaii.

6.The ground game plays a crucial role in the design; how well does the course drain?

The course drains extremely well as evidenced by this year’s Mercedes Championships. We had over 13 inches of rain on Jan.1-3 and on the 5th we were off the cart paths for the practice rounds (practice rounds are with carts).

7. What time of year does the course play its fastest/firmest?

Usually The Plantation Course is at its firmest in the spring, May-June, but we have been very firm in October, also.

8. Reflective of the property, the holes that emerged are highly unique and require course knowledge. What was the feedback that you received during your first PGA event?

Holes #1, #6, #12, and #18 are the ones that require the most course knowledge because they can be played different ways depending on the wind direction. Our first PGA TOUR event, was the 1991 PING Kapalua International, and the golf course was liked and disliked by an equal percentage of players because of its design characteristics of playing the ball on the ground. I remember the course being so firm that on #17 which has a tournament tee of 551 yds (par four), Sandy Lyle was using a one-iron to keep from going too far off the tee which means he was close to hitting it four hundred yds with an iron. 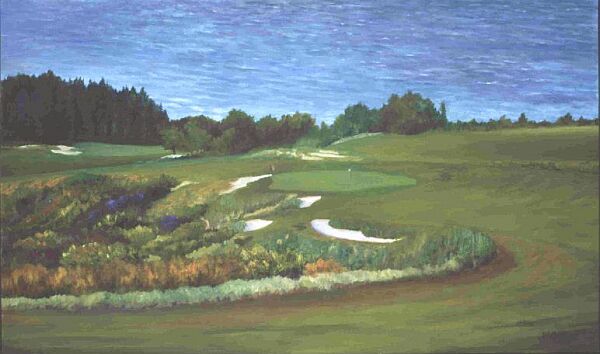 No better finishing hole in golf than the 18th at the Plantation Course at Kapalua.

9. Coore & Crenshaw have been back several times since the course opened; what significant work have they done?

10. How has technology advances in the past ten years affected the play of the course? Do you see shots now that you never thought possible when the course opened?

The Plantation Course is no different than the other courses as we all have witnessed how technology has changed the length of the golf course. When we first opened in the early 90’s, only a Davis Love III would use an three wood off of #1 with the trade winds helping the tee shot. Now practically all of the players are not going with the driver when the trade winds are blowing.

11. Do you have the ability to move several tees back if you need to for the Mercedes Championship?

We haven’t used the back tee on #17 for a few years and we should. We have actually moved to forward tees because of strong Kona (south) winds in recent years. 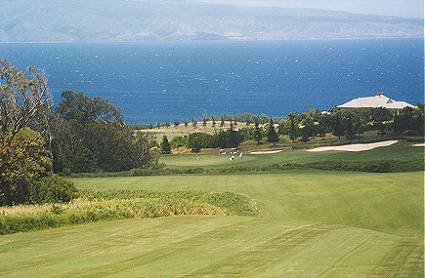 The thrilling 17th as it tumbles downhill.

12. The Plantation Course has hosted the Mercedes Championship for six years now; has a particular comment from a professional stuck with you?

I feel that the PGA TOUR players have learned to play the course and enjoy playing it as the start to their season. Remember to play it in January, you have to be a winner and that provides a great incentive to coming to The Plantation Course at Kapalua.

13. The trade winds blow in opposite directions; please give an example of how that can affect the play of a particular hole.

Well, you have two types of winds, the trade winds and the Kona winds. Recently, we have experienced more of a Kona wind condition at the Mercedes Championships. 1999, 2002, 2003 and 2004 were years where the Kona winds were prevalent, or very little winds were affecting the players. Hole #1 (tournament length is 520 yds-par four) is an example of a 2 iron, 9 iron w/trade winds and with the Kona winds it plays to a driver, three wood, at the extreme.

14. What do you, your staff and the greens crew do to the course in preparation for hosting the Mercedes Championship?

Our biggest challenge is our play restrictions. Starting around Nov. 15th, we stop all afternoon play on The Plantation Course and restrict everyone to the cart paths to help with divot wear and provide the TOUR with the best experience that we can provide.

15. Over all the Mercedes Championships, which hole has played the highest in relation to par?

No. 1 has been the most difficult particularly with the Kona winds. I believe in 2002, it was rated the hardest par four next to the Road Hole. 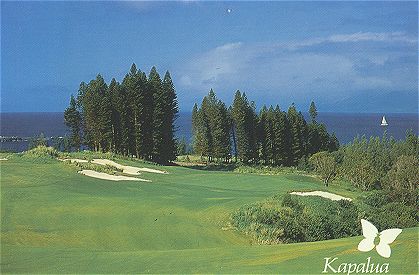 The demanding approach to the 1st hole.

16. What advice would you give first time resort guest? What is the best time of year to come?

The advice I would give a resort guest for the first time playing The Plantation Course, is to try to get paired with a member or returning guest as they can use the advice. Or take one of our caddies out to enjoy the experience just that much more. Anytime of year will be great as our summers are very comfortable as our temperatures never really get to 90 degrees.

17. How well does the course play for women? Can you give some examples?

The golf course plays well for women and at 5600 yards it isn’t too long for their enjoyment.

18. The list of past champions is as impressive as any PGA tour stop. The course seems to have the knack for producing great golf from its greatest players. How do you account for this?

We have been blessed with great champions particularly with the Mercedes Championships. During tournament week we have past champion banners present for everyone and seeing David Duval, Tiger Woods, Jim Furyk (who owns a home at The Plantation Course), Sergio Garcia, Ernie Els and now Stuart Appleby is very impressive.