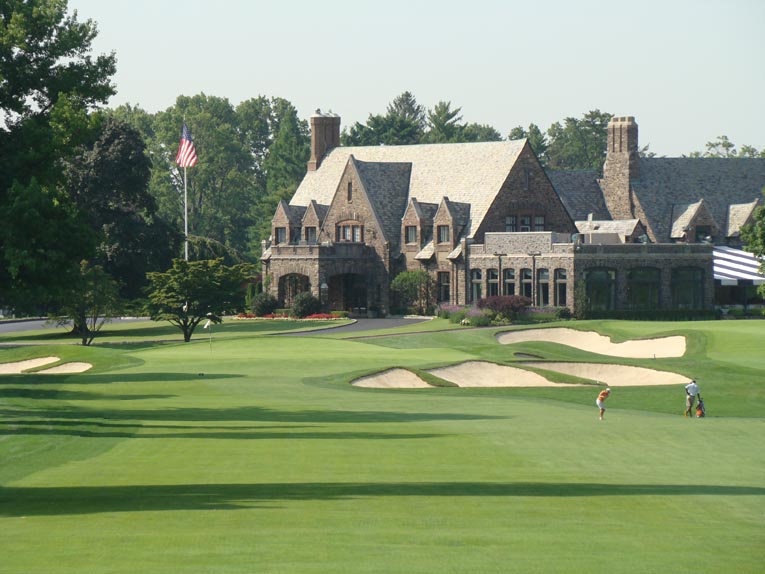 Winged Foot is a place for serious golf with the stone clubhouse a perfect reflection of the cold, hard task at hand. Those with other, non-golf interests need look elsewhere.

The West Course at Winged Foot is a glaring exception to the rule that a great piece of land is a prerequisite for having a great course. A great architect given an acceptable piece of land may well produce a superior course to an architect who fails to take advantage of a great site. Winged Foot is laid over rather ordinary (though superbly maintained) terrain. Only a few holes on the inward half have any natural features. A.W. Tillinghast worked on a number of better properties including Bethpage (Black), Somerset Hills in New Jersey, nearby Quaker Ridge and San Francisco GC. Yet, the West Course at Winged Foot is viewed as his masterpiece. Why?

The golfer does not notice the blandness of the land itself until he has played the course many, many times or even more likely, until someone points it out to him. The golfer is forever locked in his struggle against this supremely difficult course. The constant need for long, accurate tee shots through the trees and controlled approach shots with long irons to dramatically bunkered, sloping putting greens more than holds the player’s attention. Indeed, the greens are surprisingly small, given the long clubs most players will be hitting into them, the deep bunkers, and the severe pitch and/or contours of most greens.

Winged Foot is among a dozen or so courses in the world where, at the end of the round, the player could not even begin to suggest architectural improvements or to complain about an indifferent hole. As Dave Marr, who worked under Claude Harmon there for many years, was fond of saying, ‘Winged Foot has the eighteen best finishing holes in golf.’ 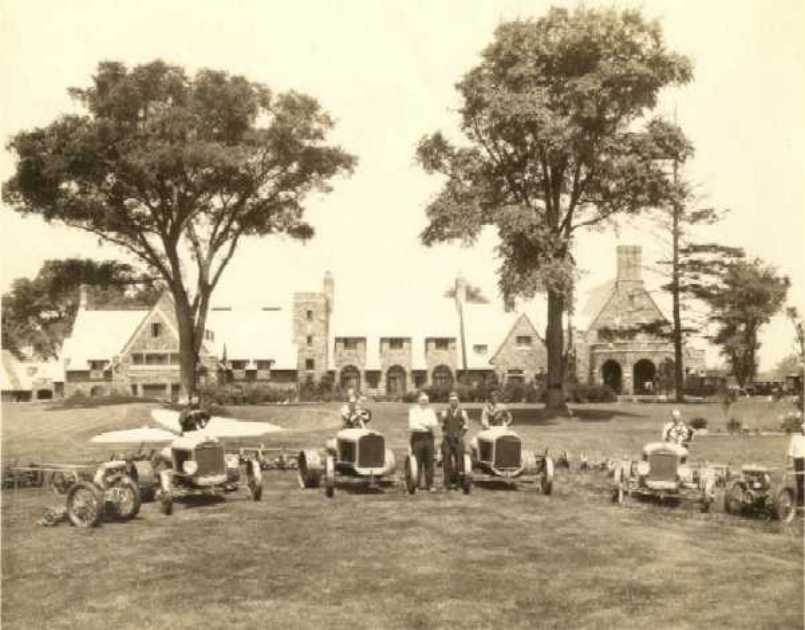 The Green Keeping staff has long led the way in America in presenting the two courses in first class playing conditions.

However, Winged Foot West is not just long and difficult. The course has much more variety that one would expect – a short par four on each side (the sixth and eleventh), a well-balanced set of short holes and two par fives where some entertain the thought of getting home in two. It also has a pleasing number of dog-leg holes where a player wants to shape his tee shot a certain way to gain an advantage – fades on the eighth and seventeenth and draws on the first, sixteenth and eighteenth holes.

The only ‘problem’ with the course is nothing that a couple of days with a chain saw wouldn’t fix. Like far too many of the older courses, Winged Foot has simply become overgrown with trees — too big and too many of them, especially behind some greens (e.g. Eleventh and Twelfth West, Sixth East, Sixteenth East). Over one thousand trees too many are on the West course alone. The clubs effort to fell several hundred trees in the winter of 2000 was a commendable start and hopefully will be repeated for the next several winters as well.

Speaking in general terms on all courses, architect Gil Hanse points out that ‘If the architect had wanted there to be trees on his course, he would have planted them.’ That logic is overpoweringly simple and correct and is illustrated by a comment by Tom Fazio made several years ago: When asked why he wanted to remove a tree on the corner of the dog-leg left first, Fazio replied simply: ‘Because if I were designing the hole now I would not put a tree there.’ In fact, now that the first green is visible from the tee, more players are likely to wind up in the left rough as the sight of the green will draw them in that direction. Trees were not intended to be such a prominent design feature at Winged Foot. The trees hamper the strategic options, dictating too often that only a rifle straight shot will suffice. The overabundance of the trees actually hides the beauty of Tillinghast’s work. The eye would focus on the brilliant (!) rolling green complexes and sensational bunkering patterns if the trees were cut back. Tillinghast would be ironically more pleased with how the Bethpage is presented with the trees well back from play than Winged Foot. 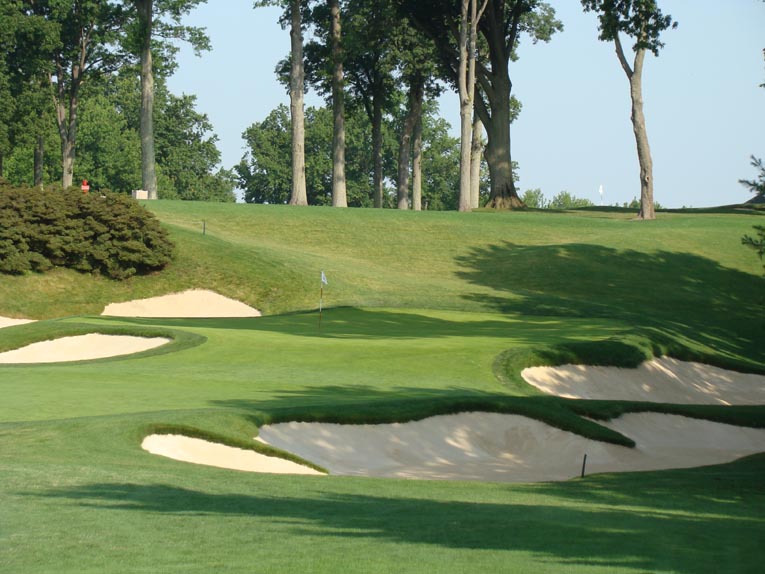 No club has a better collection of one-shot holes than Winged Foot with its two courses. Above is the sixth hole on the East.

Nonetheless, at the end of the day, Winged Foot should be on every budding architect’s list of courses to study. One of the game’s best architects transformed an unremarkable piece of property into one of the world’s top courses. That is surely the best indicator of the skill of an architect. Many clubs have better land, but few have an equal course. You cannot help but keep asking yourself why there are not more courses like Winged Foot — how hard would it be to build holes similar to those on the front nine, especially given that Tillinghast provided a road map nearly 100 years ago.

Similar to Pinehurst No. 2, its series of great greens and accompanying bunkering mean virtually every hole could be listed under Holes to Note but we elect not to do so for sake of  brevity.

First hole, 445 yards; Dead flat, yet one of the most difficult opening holes in the world, due more to its treacherous green than its length. In the 1974 U.S. Open Jack Nicklaus putted off the green. Is it wise to have such a difficult hole as the first? Perhaps. Players would most likely bogey this hole no matter where it fell in the round, so it eases some of the pressure of having to make good swings on the first hole and the player’s mood for the round is not ruined if he does in fact score bogey. 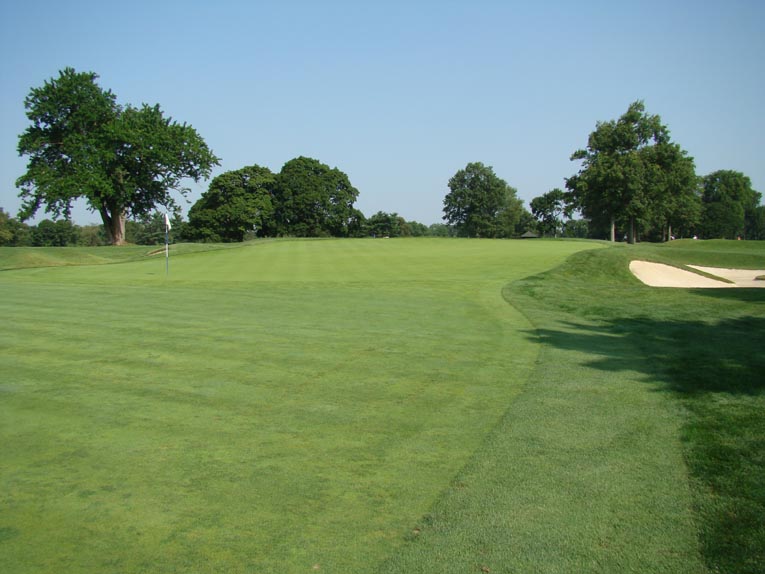 The first green starts at grade with the fairway before rising nearly six feet toward the back. Yet, it steps up so slowly, so gracefully that the first time golfer is frequently deceived by the green’s wicked qualities.

Third hole, 215 yards; Wonderfully simple: Bunker left, bunker right with narrow entrance to severe green. In the 1959 U.S. Open Bill Casper laid up short of the green each day (and scored three each day). The back to front pitch of the green (which could be replicated anywhere) turns this flat hole into a hole of merit and distinction. 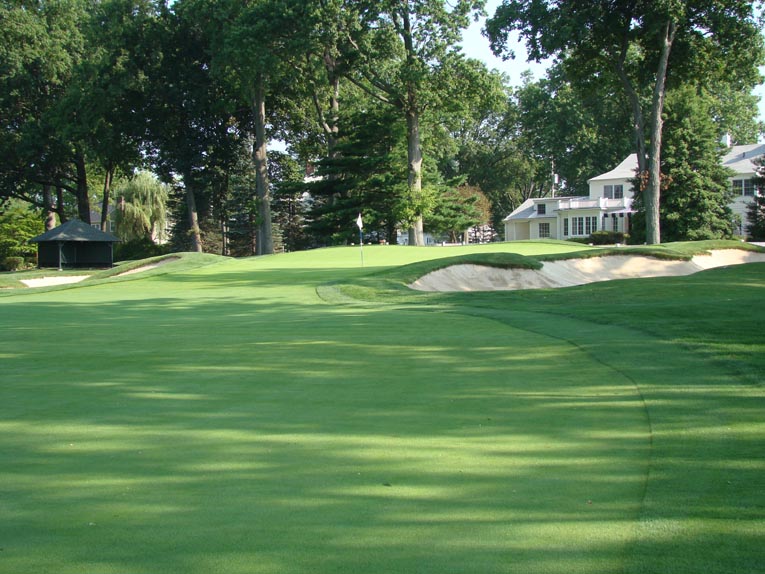 Though deceivingly straightforward, this green complex scares even the best to consider laying up.

Tenth hole, 190 yards; Hit the green or else. The deep bunker on the right seems to dominate the hole, but it might be the best place to miss the green even though Julius Boros once quiped that they could make a national park out of it. Certainly the toughest green on the course and perhaps the single toughest green in championship golf. 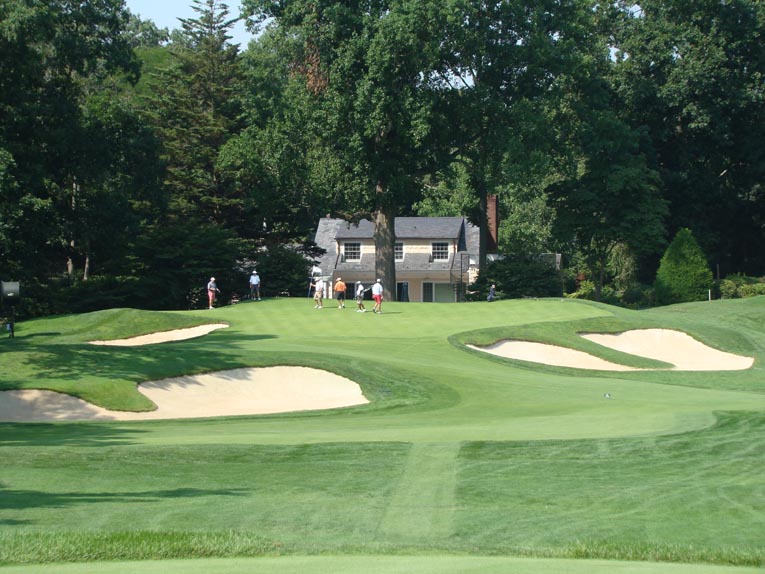 Fourteenth hole, 440 yards; Good example of using a bunker for directional purposes, making the blind tee shot less alarming. This elevated green is generally one of the firmest on the course.

Fifteenth hole, 415 yards; Over some of the more rolling terrain, the 15th forces the player to choose between risking driving the ball too far and into the creek that lies at the bottom of a slope some 300 yards from the tee in order to have a short-iron into the green and laying back to 175 yards to give himself a level stance for his approach. It is rare that a hole that is essentially straight can force such decisions from the player, with the creek and the sloping fairway both requiring thought. 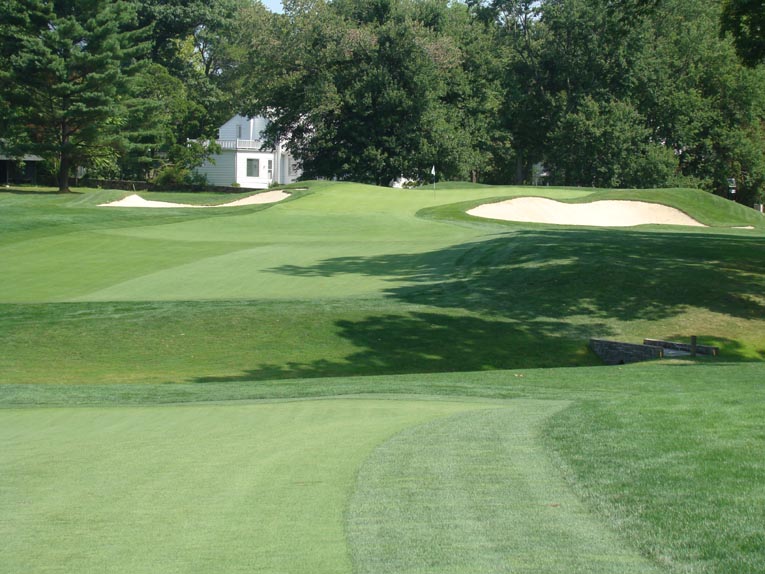 The 15th from the crest of the hill: Does the player risk driving his ball to the flat just short of the creek?

Eighteenth hole, 450 yards; Along with Oakmont and Merion, the best inland finishing hole in the United States – hard but with plenty of character. Interestingly enough, the only hole with bunkers on only one side of the green. However, the player who misses the green to the right may wish he were in sand. This green has long been recognized as one of the greats in golf. Part of the reason lies in the fact that this green is relatively exposed with few trees around it. It is there for all to marvel. However, there are other greens of similar quality at Winged Foot that would be ‘unmasked’ if the trees were cut back. It is hard to overestimate the difficulty of the putt that Bob Jones hold here in 1929.