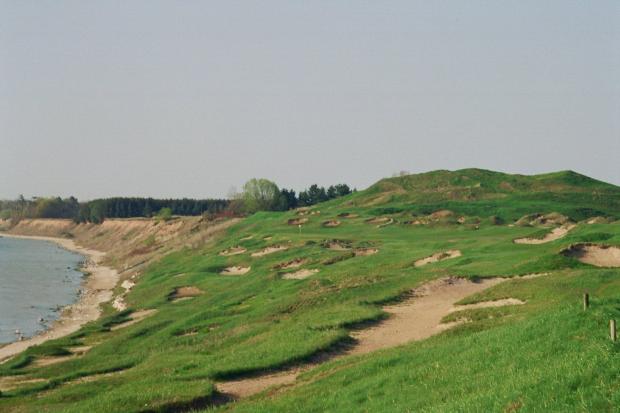 The unique beauty of Whistling Straits, as seen from the fourth tee on a calm spring morning.

Are certain architects better suited for certain projects? As much as one should resist stereotyping architects and their styles, there are examples of marriages where it is hard to imagine a better fit. MacKenzie/Cypress Point and Coore & Crenshaw/Sand Hills spring to mind.

At the other end of the spectrum from C&C’s minimalist project in the rolling sand dunes of Nebraska, the property that was to become the Whistling Straits golf course was essentially featureless (in fact, it was a former air field), save for a stream meandering through its middle. The only really good news was that Lake Michigan bordered the expansive property for two miles along a bluff.

To give the dull land drama, wall to wall shaping was required. Who should Herbert Kohler have selected as architect for such a project?

Pete Dye, of course. Firstly, they are good friends who had worked together with great success on the Blackwolf Run courses. Secondly, they share a common vision of not insulting the resort golfer’s intelligence by dumbing down the course for the sake of pushing more rounds through. Thirdly, they have toured the United Kingdom together and studied such links as Cruden Bay and Machrihanish and both were in agreement that a links type course would work at this site along Lake Michigan. Finally, as at The Ocean Course at Kiawah, both the owner and the architect had a vision of the water being in view from the inland holes as well as the holes along the bluff. With Dye having spent more time in a bulldozer than any other architect, he was indeed the right man forsuch a massive undertaking and his first step was to order in 800,000 cubic yards (!) of sand and dirt. 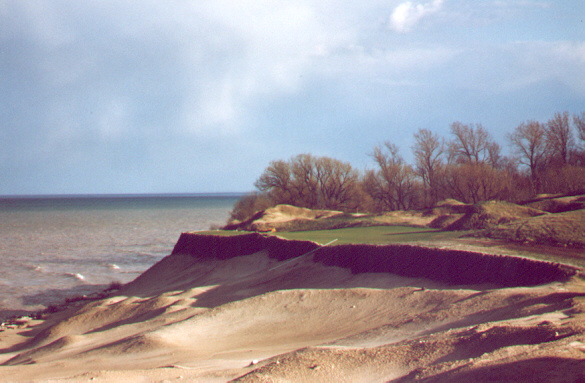 The construction of Whistling Straits was a massive effort. Shown here is the one-shot seventeenth, some fourteen months before the course opened in 1999… 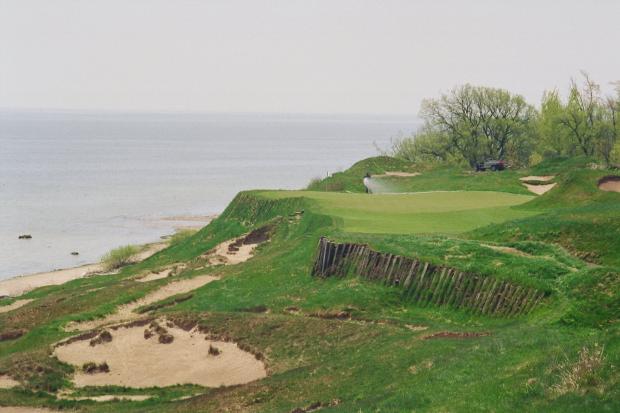 …and the finished hole as photographed in 2003.

Even though the terrain that Dye ultimately created is dramatic, he gives the golfer a realistic chance of hitting plenty of greens as they are large at an average of 9,100 square feet (compared to Blackwolf Run’s greens at 7,400 square feet for instance). In keeping with the courses Kohler and Dye studied overseas, there are a number of grassy hollows around the greens that provide the course with short game interest (though the author wishes that more of the grasses left, right, and over the greens were maintained at fairway height as opposed to rough).

Importantly for such a windy site, the ground game is a distinct option. Dye selected a blend of three types of fescue grasses on the fairways to simulate the run found overseas and left many of the greens (the first, second, fourth, sixth, eighth, ninth, tenth, eleventh, thirteenth, and fifteenth) open in front. Downwind or into the wind, the course remains playable. Though manufactured, the fairway contours feed beautifully down the hill and into the thirteenth green.

The wind, firmness of turf, and various hole locations on the large greens conspire to make Whistling Straits play drastically different day to day and even hour to hour. However, unlike many links that rely on wind to enhance their challenge, the inherent design quality of the individual holes at Whistling Straits means it remains an engaging test even on a rare calm day. 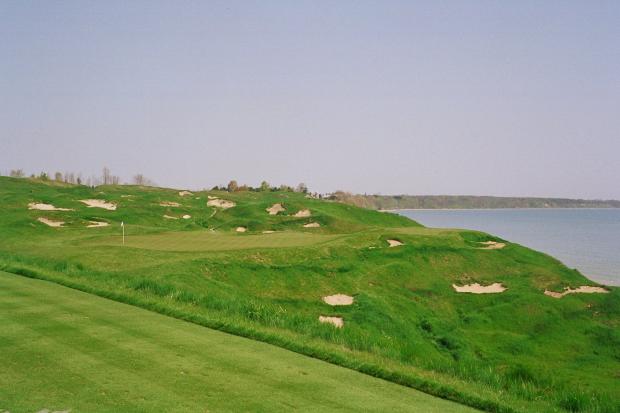 The long, angled green of the one-shot twelfth is the most obvious example in how the course’s set-up can vary from day to day. The right hole location is a good fifty paces from the extreme left one pictured above.

To compare Whistling Straits to the great links courses in the United Kingdom is a disservice to both. The attribute they share is that walking is both mandatory and sacrosanct, as it should be. In its favor, unlike many out and back links that have an inherent unevenness (e.g., Royal Aberdeen, Royal Troon, North Berwick), Whistling Straits figure ‘8’ routing presents a balanced course with an even spread of compelling holes throughout, as we see below.

First hole, 365 yards; By making a beeline for Lake Michigan, the golfer is immediately transported to the best the property has to offer. Certainly one function that a first hole should fill is that of inspiring the golfer for the task at hand over the next few hours and this hole does that as one itches to get out there and play. Looking from right to left off the first tee, the golfer sees the fairway, the white flag and Lake Michigan.

Third hole, 155 yards; Not a true Redan, the third green nonetheless possesses several Redan characteristics including a high right bank that feeds balls to the lower back bowl portion of the green. 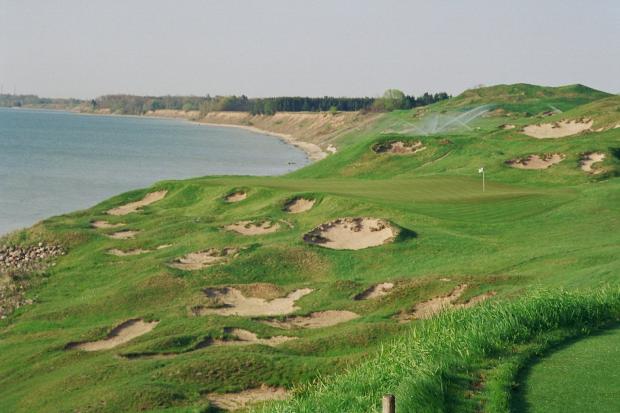 The third is the first of the four one-shot holes, all of which border Lake Michigan. To add variety, Dye had the two on each nine run in opposite directions.

Fourth hole, 445 yards; A distinct advantage is to be gained by challenging the bunkers left along the shoreline. This is easier said than done as these bunkers are menacingly cut into the steep bank that tumbles forty feet down to the Lake. The further right the golfer steers, the longer and more problematic the approach shot becomes as the fairway is pitched right to left toward the Lake. 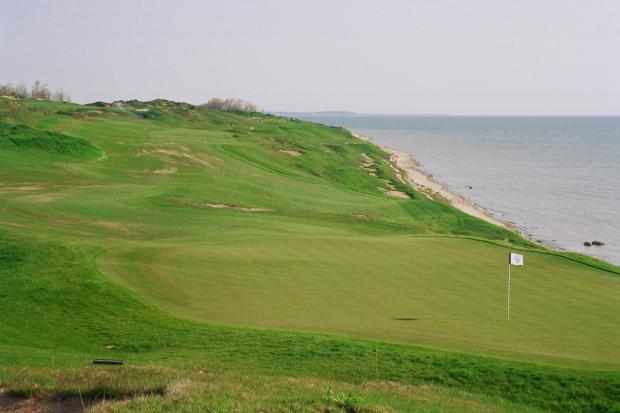 As seen from behind the fourth green, the author wishes there was more short grass and thus room to bounce in the approach from the right side.

Sixth hole, 355 yards; The holes directly along Lake Michigan (2, 3, 4, 7, 8, 12, 13, 16, 17) enjoy glamorous qualities but like Pebble Beach, the quality of the course is held high by the standard of its inland holes. Often overlooked, the sixth is a very fine short/medium two shotter with the golfer needing to avoid the line of charm off the tee with the flag flapping in the breeze well to the right of the best line for his tee ball. 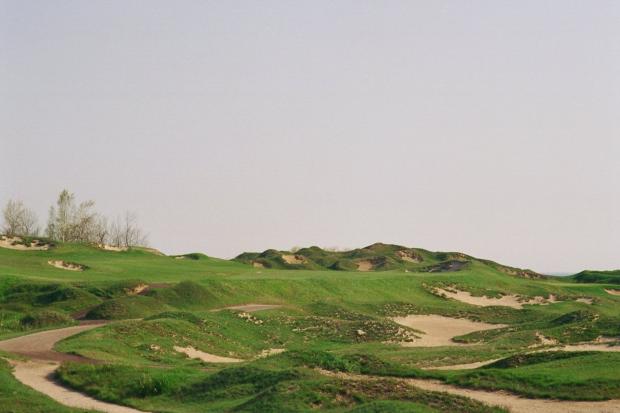 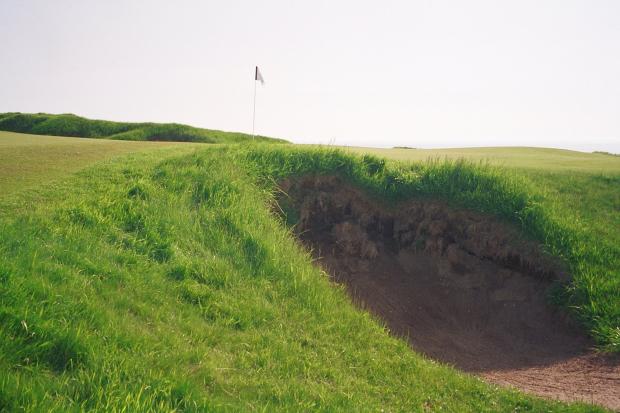 This little pit at the right front of the sixth green seems a just enough punishment for a hole of modest length.

Seventh hole, 200 yards; The seventh consists of a tee, a green some two hundred yards away with the shoreline, the Lake and deep bunkers in between. This is man vs. nature stuff on an exhilarating stage and Lake Michigan is not just a back drop – it is distinctly in play. The Lake is not staked as a hazard or out of bounds and the golfer is free to play his second shot off the sandy shore. 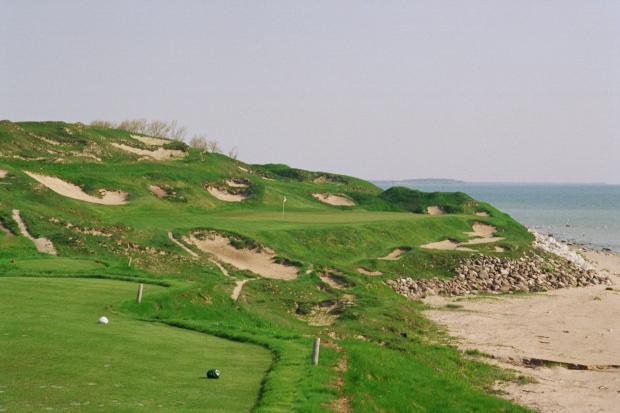 The spectacular seventh headlines one of the more dramatic sets of one shot holes in golf.

Eighth hole, 450 yards; As opposed to the fourth, Lake Michigan is on the right this time, thus not favoring one style shot or player over another. The green is angled such as to give the appearance of jutting into Lake Michigan and seeing an approach release to the back hole locations is a shot of immense satisfaction. 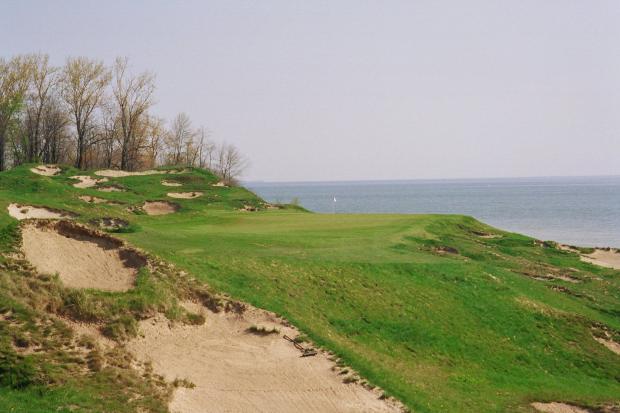 The approach to the eighth. With nothing behind the green, the flagstick is silhoutted against Lake Michigan, a clever ploy for a course where almost all holes run parallel to the Lake.

Tenth hole, 360 yards; A favorite hole for how it plays, the tee shot is across a deep valley to a humungously wide fairway. Well over thirty (!?) bunkers are in view but one in particular grabs the golfers attention: a small gathering pit dug just where a tee ball likes to land. The strategy revolves around this single bunker and the wind conditions for the day. Now suppose the tenth hole only featured this single dominate bunker. When coupled with the angled green, it still controls the entire holes play even if the other thirty some bunkers in view are removed. Would this less is more design philosophy perhaps make Whistling Straits appear even more natural? The author thinks so and worse case, the course visually would look less busy (i.e. cluttered) and how can that be bad? 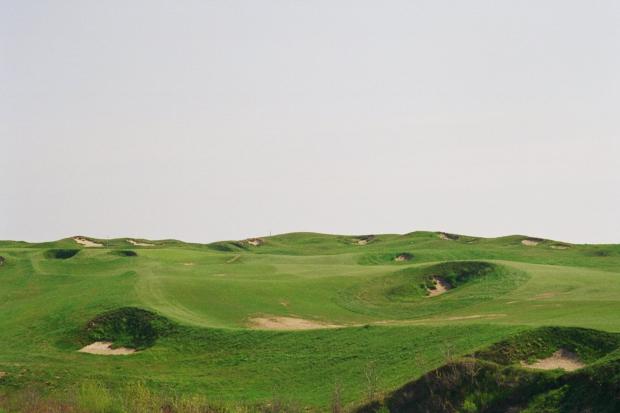 The perfectly placed fairway bunker is in right middle of the photograph. Evident in this photo is the expansive feel of Whistling Straits, which is one of its great attributes.

Eleventh hole, 550 yards; A gambling three shotter that can be tackled one of several ways depending on the conditions. The typical option on the second shot is to lay-up short or to the side of a massive banked bunker that is forty yards short of the green. From there, it is a semi-blind wedge shot up to the wild green. The other option under the right conditions is to take the bunker on with the second shot. If the ball carries the bunker, but fails to make or hold the green, the gambling golfer still has a relatively straightforward up and down for a birdie. The golfer who skirts the bunker must come into the green from a less advantageous angle. 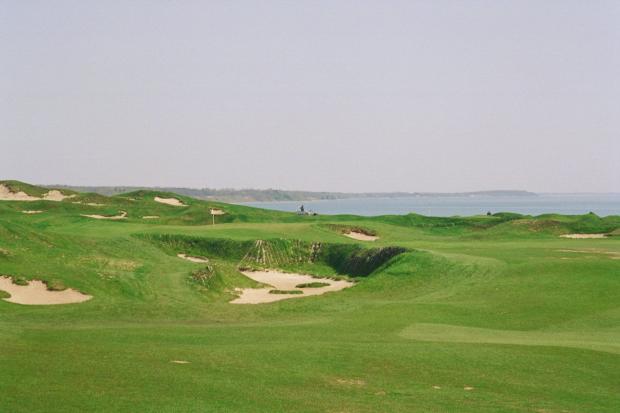 The pit on the eleventh dominates the second shot.

Fifteenth hole, 450 yards; From well above the fairway, Dye angled the hole at a 45 degree angle toward Lake Michigan. Thus, apart from making a visually stimulating hole, the benefit from the architect’s point of view is that the wind hits the golfer from a different angle than any other hole. This is the only two shotter on the course to have the Lake as a backdrop for both shots. 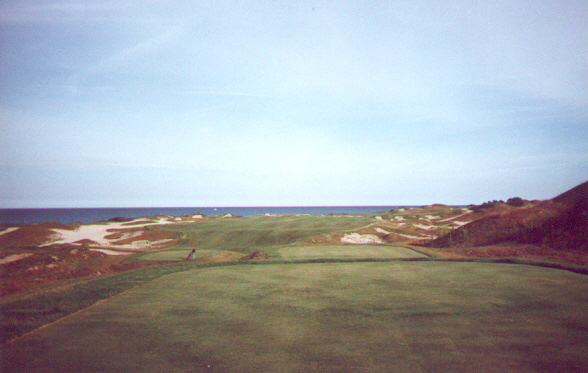 The fifteenth plays toward the Lake, providing a different wind angle.

Seventeenth hole, 215 yards; Visually intimidating, this one is set in the opposite direction to the seventh with the Lake and the deep bunkers on the golfer’s left. A bit of a pull from a tired or anxious swing will leave a recovery shot fifteen to twenty feet beneath the surface of the green. Rather than being mesmerized by the gumpf on the left, the golfer should prudently take what the architect has offered: a helping right to left slope at the right front of the green that propels the ball well into the green’s center. 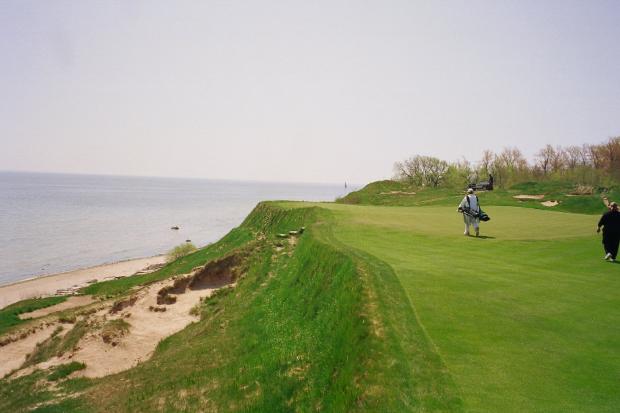 One of the game’s most dramatic penultimate holes.

At Whistling Straits, Dye took anumber of chances and many of them paid off handsomely. In terms of holes, the two exceptions are the double dogleg fifth around two water features and the eighteenth hole, which is horribly contrived with a poor tee shot and an even worse approach. Despite these two holes, the golfer still senses that he has just completed a round on one of golf’s most impressively engineered courses as no one can deny the quality of the golf that Dye created from scratch.

Starting in earnest in the 1960s, architects gained ready access to heavy earth moving equipment. Interestingly (and tellingly) enough, course design simultaneously suffered as architects were unsure how best to use their new toys. Pete Dye at Whistling Straits represents one of man’s boldest and most comprehensive uses of such heavy equipment in simulating nature and her contours. Make no mistake – man will never capture the subtleties and nuances found in nature but as none previously existed here, Dye’s effort is an heroic attempt and one every architecture student should see.