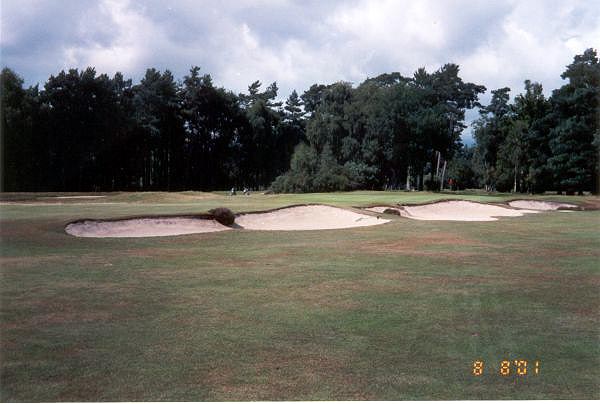 The diagonal bunkers across the 440 yard seventeenth green are evidence of the skill and thought that Major C.K. Hutchison, Sir Guy Campbell and Colonel S.V. Hotchkin frequently displayed in designing golf courses.

Under the lee of the South Downs, this course is removed from the hustle of London. If there were no golf course, the walk on the heath would still be immensely enjoyable. The combination of deep purple heather, gorse, pine and silver birch along with the green swatches of grass simply pulls one along.

Sir Guy Campbell, Major C.K. Hutchison, and Colonel S.V. Hotchkin built West Sussex at Pulborough in 1930, some five years after they had started their own design firm. One of their first endeavors had been Woodhall Spa in 1925, so it comes as no surprise to find artful bunkering here as well. Their services were utilized by many of Great Britain’s finest clubs, including Royal West Norfolk in 1928 and North Berwick in 1930. World War II and Huthison’s health effectively ended this partnership in the late 1930s, which is a great shame because this was a formidable team and they showed much flair at a time when few others did.

Like several other great favourites on this website, a look at the score card is deceiving. Pulborough is 6,220 yards and plays to a par 68. Yet once again, there are no par fives to speak of and with seven par fours greater than 400 yards, and two par threes over 200 yards, you will be asked to hit every shot. Furthermore, with the exception of perhaps the 9th hole, there isn’t a dull hole to be found.

After the first three holes, most of the fairways on the par fours bend one way or another. Given this is a heath course and that the trees frame the holes more than encroach, the better golfer is encouraged to shape his tee shots. A hard draw over the dogleg left 10th with four bunkers in the corner is followed by the need to hit a power fade on the long 11th. And so the course pleasantly goes, asking something one moment and something altogether different the next. Yet the sum of what it asks is refreshingly within reach of all golfers. 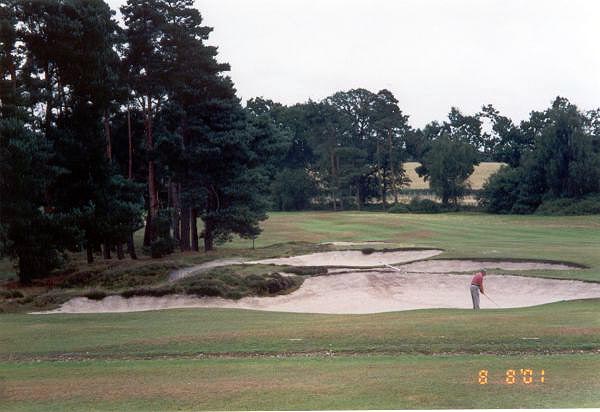 Is this the sandbelt of Melbourne or the outskirts of London? Pictured are the bunkers that the tenth at West Sussex dogleg around.

Fourth hole, 390 yards; This hole sums up the appeal of Pulborough. It is playable for all skill levels and yet the stronger golfer can seek an advantage. The hole bends to the left. If the bunker at the 200 yard mark on the inside of the dogleg can be flown (ideally with a slight draw), the approach shot becomes much shorter. A gully gives the fairway a fine rumpled look. The green is unprotected save for its fine nice rolls. 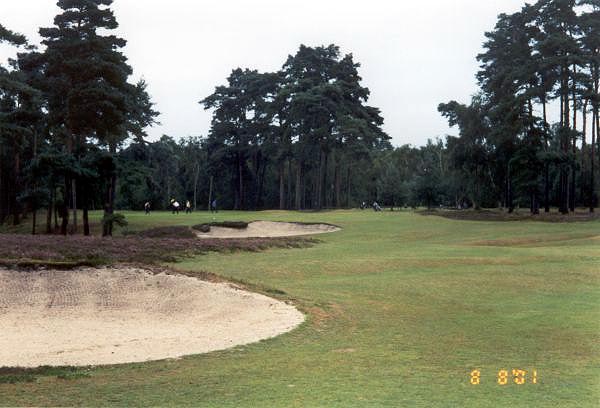 If the golfer can skirt the bunker in the foreground off the tee, he may get additional role The other bunker pictured above is 40 yards shy of the green.

Fifth hole, 145 yards; A hole of true beauty. The silvery – there is no other word – sand sets off the green to great effect. A bunker some thirty yards short of the green creates dead space between it and the green so you have to trust the yardage. The backdrop of the Chanctonbury Ring on the summit of South Downs adds to the setting’s tranquility. 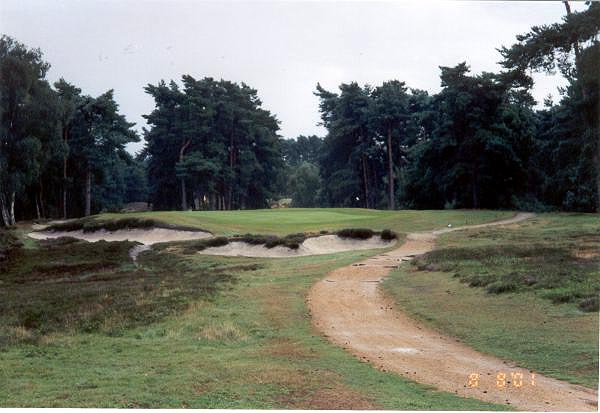 The glories of the fifth aren’t fully captured on this dullish gray day.

Sixth hole, 225 yards; This down hiller is almost on the same scale as the 9th at Yale and the 5th at Pine Valley. but the similarity with the back to back par threes at Cypress Point may be the best. A wetland/pond is 30 yards shy of the green and must be carried. Originally, the green ran much closer to the pond but as it is today, the green is none too big a target. The green is pinched in from the left by a hillock with out of bounds just over it and a pair of bunkers on the right. Suffice to say, a chip and a putt is generally the best the golfer can hope for. 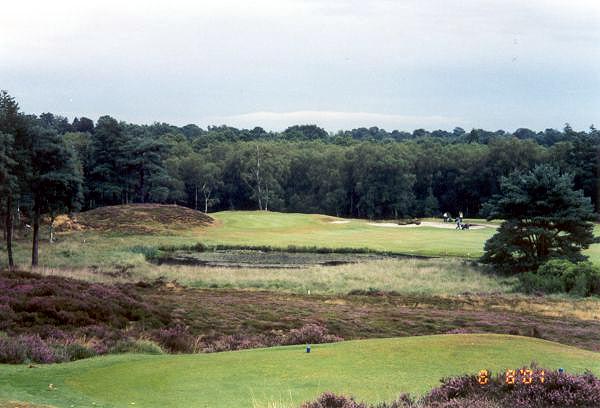 The sixth green is just to the right of the distant heath covered hill and to the left of the men on the seventh tee.

Thirteenth hole, 380 yards; The hole plays uphill to a convoluted green located out on the heath. Three deep bunkers cover the front of the green, so the approach needs to be flown well onto it. The architects used the natural slope of the land to create the most severe green on the course. The hole location on the back right shelf takes real skill to get near. 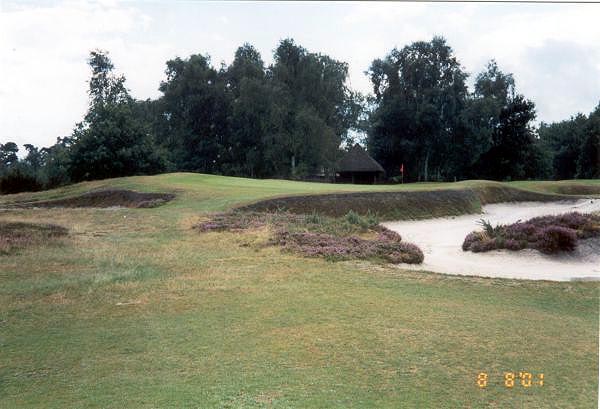 The uphill approach to the impressively defended thirteenth green.

Fourteenth hole, 430 yards; As the 13th rose up the slope, so the 14th plays back down. Once again, the hole has a slight bend to it, this time to the right. A fade over the heather and gorse will do nicely. The approach may be the most testing on the course. Cross bunkers cut across the fairway at the 100 yard mark but the real difficulty is in hitting the narrow green. It is magically tucked in its own little nook, with a bank on the left to kick balls away and a bunker front right.

Sixteenth hole, 365 yards; When first stalking a piece of property looking for the best holes/routing, should an architect look specifically to find holes that don’t require any bunkers? If he is successful in finding such holes, doesn’t it by definition suggest that he is maximizing the natural features of that site? Four of the holes at West Sussex are bunkerless, including this one, and the authors reckon that speaks volumes about how Major Hutchison, Sir Campbell, and Colonel Hotchkin approached the design of this course. 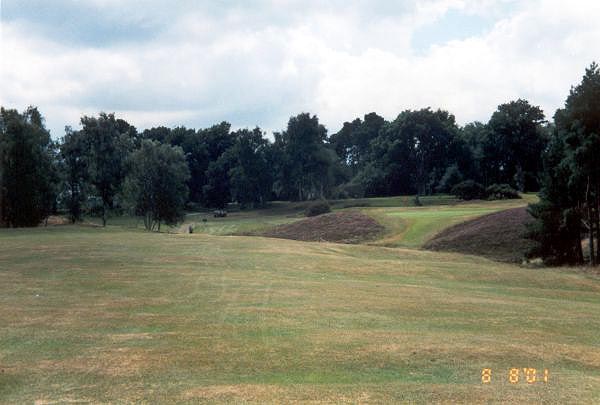 Can you imagine a more natural green site than the one at the sixteenth on the far, heath covered hillock?

Sir Peter Allen noted in his book: ‘I think if I had to choose one example to demonstrate the best sort of British inland course, to explain what it was trying to do to provide entertainment, and why it had to be so different from a links, to some men from Mars or a group of intelligent Americans, I think I would pick Pulborough, much as I love Woking, Liphook, St. George’s Hill, and a dozen others.’

Unfortunately, this is the last first-rate course under 6250 yards to have been built with which the authors are familiar. Appreciating how enjoyable a 2 1/2 hour round here is, it makes you wonder where the message was lost.