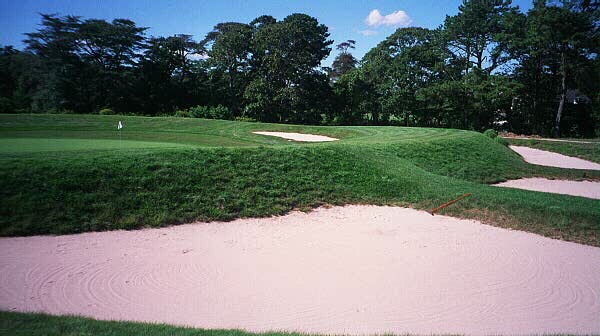 The Punchbowl par three 3rd lets the golfer know early on that Westhampton is a special course.

The virtues of playing golf on Long Island in the bracing seaside air have long been lauded. With so many world re-known courses of historic importance, it is a tough neighborhood indeed for a course to gain its fair share of recognition. Such is the case of Westhampton Country Club. Located elsewhere like Cape Cod, this course would be a stand-out. With many of its members maintaining a primary club closer to New York City, Westhampton is considered a ‘second’ club. Yet don’t let that expression fool you. In some cases, a second club is a shorter course that can even flatter your golf game but such is not the case at Westhampton. Starting with the 445 yard 4th hole through the 405 yard 12th hole where a lay-up off the tee is dictated, the golfer faces a series of searching long iron approach shots into imaginatively contoured greens. Measuring over 6,500 yards to a tight par of 70, Westhampton offers a thorough examination, especially when the typical one-and-a-half club wind blows off the bay.

Believed to be Seth Raynor’s first solo design effort, the greens at Westhampton are 90% plus accurate to their original contouring and size. The golfer marvels at the number of thoroughly original interior green contours such as those found on the1st, 4th, 7th, 9th (!), 11th, 13th, 14th, 15th and 16th greens (i.e. half the holes). As good as these nine greens are, Richard Spear, the superintendent at Piping Rock, is even more amazed that all the remaining ones also offer something unique or of interest.

Suffice to say, the greens are first rate but how is the design from tee to green? While the routing of the course remains faithful to Raynor’s 1914 design, none of the holes remain untouched. Be it from the Depression, the 1938 hurricane, or the work done by various consulting architects, the holes have had this or that done to them. Westhampton could easily be a hodge-podge of architectural styles from different eras. However, it isn’t, thanks in large part to the unifying hand of Westhampton’s Superintendent for over twenty years, Mike Rewinski. Born and raised on Long Island, Rewinski has studied every notable course on Long Island. He has seen how grass face bunkers were built at the turn of century, when and how mounds were employed by the master designers of that era, the size that old greens enjoyed, how the greens were linked to their surrounding bunkers, etc. 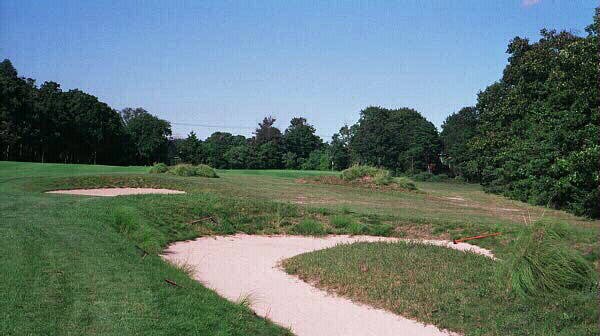 Rewinski has successfully translated this local knowledge into the ground at Westhampton. After the club’s rebuilding program in 1988/89 with Brian Silva, Rewinski continued the program in house, adding features and changing ones that had been done in the wrong style. In the process, he has restored features to the course that many people would associate with Raynor’s work from 1914/5, a sure sign of a job well done.

Though some cross bunkers have been lost through time, particularly on the 4th and 9th holes where it is hard not to lament their demise, plenty of genuine fairway bunkers remain. New bunkers have been added from time to time to preserve the challenge at Westhampton, and Rewinski has seen to it that they are faithful to the Raynor style with flat bottoms and grass faces. 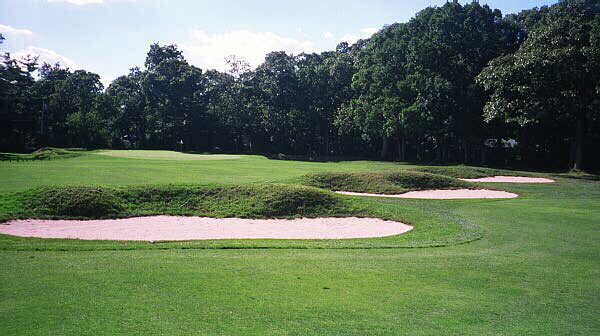 The attractive diagonal bunkering across the 6th fairway

Coordinating the use and appearance of the mounding posed an interesting challenge. Raynor’s original plan clearly shows mounding strategically placed throughout the course, which is unusual as mounding doesn’t play as prominent a role in his subsequent designs. Various architects had built mounds over the years at Westhampton but as Rewinski points out, Raynor’s mounds have an unnatural, engineered look (as opposed to Ross’s more graceful mounds for instance). Purposefully replicating them without appearing too neat and organized is difficult. Through trail and error, and over a period of years, he and his crew have perfected giving the mounds across the entire course this desired manufactured look. 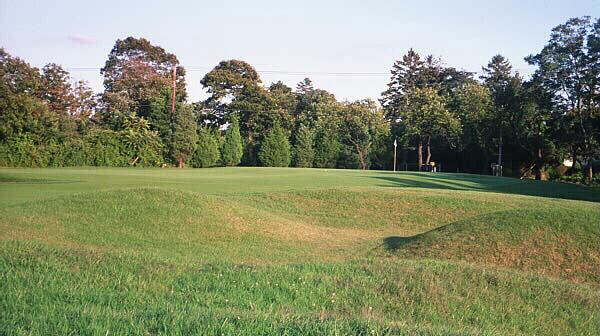 Raynor’s plans called for mounds between the 16th fairway and green. The mounds pictured

The picture that is now presented at Westhampton are eighteen holes that are well linked to one another through their common roughed-up mounding, grass faced bunkering and old style greens. The end result is a course that enjoys ‘an old-fashioned flavor,’ according to Dr. Bill Quirin in The Golf Clubs of the MGA.

First hole, 305 yards; A different kind of starting hole that is highly effective at grabbing your attention. With out-of-bounds right and a series of mounds and bunkers left, the fairway needs to be found. The approach over a man-made burn is to an interesting green that features small plateaus in both the back left and right corners of the green. Welcome to some of Raynor’s finest greens! 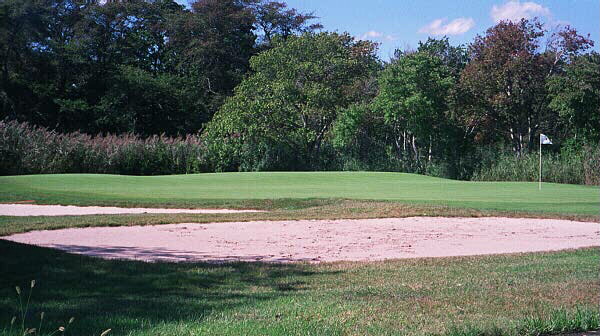 The unique contours of the 1st green

Third hole, 170 yards; Along with Southhampton, this is the only punchbowl par three that the authors are aware of in the Raynor family. At one point, a view was cut through the ridge fronting the green, but Rewinski faithfully restored the hole to its original form. Only the flag itself, invariably flapping in the ocean breeze, is visible from the tee and blind bunkers on either side of the green in the punchbowl itself are an interesting touch. 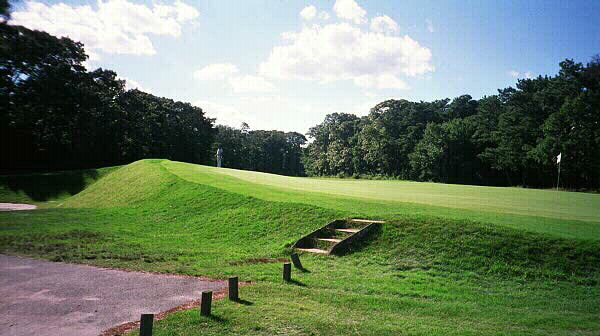 Taken from behind the green, this picture highlights the perfect slope of the Redan green

Seventh hole, 200 yards; While it is generally acknowledged that National Golf Links of America and Piping Rock possess the finest Redan holes, what other courses possess a Redan as good or better than the original at North Berwick? Well, this one is one of the few. Uniquely, the left hand side of the green slopes away from the front bunker and a fade can work well for certain hole locations.

Eleventh hole, 180 yards; Originally a true Short hole at 125 yards, the tee has undergone two expansions to where the hole can now require a long iron. With the bay visible in the background, it is an exhilarating spot but the highlight is the imaginative double bowl green which creates all sorts of interesting hole locations. This hole never required additional length to be interesting. 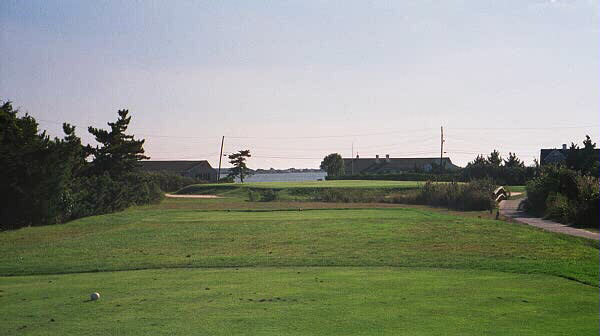 The inspiring 11th with the bay in the distance.

Thirteenth hole, 320 yards; The length hole that Raynor didn’t excel at. In the Raynor family, the 10th at The Creek, the 3rd at Fishers Island, the 14th at Country Club of Charleston, and the 13th at Shoreacres are of great merit but they are the exception rather than the rule. The tee ball must find a fairway that narrows in between bunkers and ridges the further one drives it but the semi-blind approach shot over a mound to another interesting green is the real test. 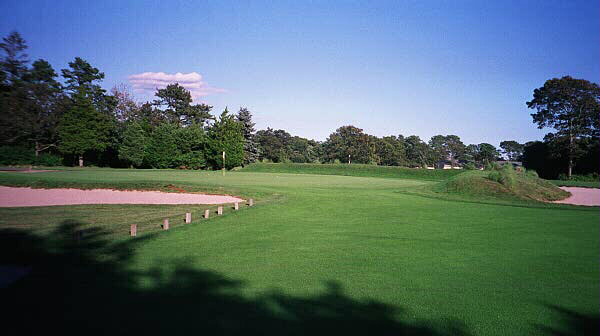 The clever 13th green is fronted by a Raynor built mound that Rewinski then extended along the right hand side of the green (this picture is taken from the left of the green).

Fourteenth hole, 515 yards; A hole that calls for a clear plan of attack. If the golfer hopes to reach the green in two, he must flirt with the left edge of a fairway bunker off the tee with his driver. Then he faces a series of randomly placed bunkers that are scattered around the eighty yard mark from the green. Can he carry them? If the hole location is left, does he lay up right? If it is right, does he lay up left? The double plateau green is not the place to find out that you have made a mistake in judgement. 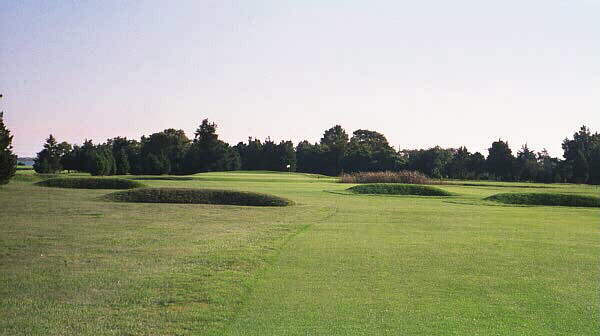 Bunkers short, pond right, double plateau green ahead – the golfer needs to think what he is trying to accomplish.

Fifteenth hole, 400 yards; Should be called the alphabet hole. A series of five bunkers form a ‘v’ sixty yards short of the green. The green itself has internal contours that resemble a C. Along with the original mounds that encase all but the front of the green like an upside down U, this hole highlights some of the reasons why Westhampton exudes an old fashioned charm. 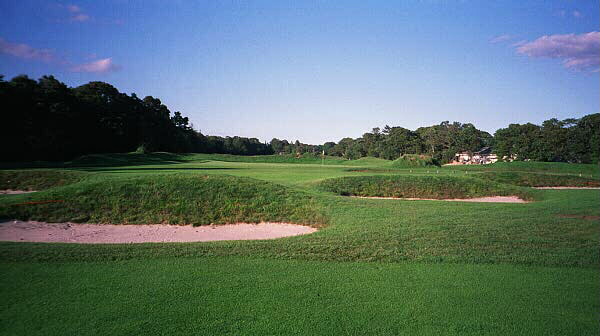 These bunkers form a V sixty yards short of the 15th green.

In terms of the pacing, the heart of the challenge is the tough stretch from the3rd through the 12th. However, what may not be as evident is how readily the golfer can also drop a shot at each of the next four holes, where the greens are highly contoured and offer numerous tricky hole locations that make the golfer work hard to get the ball into the hole, even though he may have had only a short iron approach shot. Furthermore, Raynor cleverly preceded these boldly contoured greens with the most innocuous one on the course (the 12th), a clear indication that Raynor understand the subtler aspects of the game even though he was not a keen golfer himself.

The only feature that Westhampton lacks that many of Raynor’s finest courses possess is a sense of expansiveness. Fishers Island, Yeamans Hall, Camargo, Lookout Mountain, Yale, etc. are blessed with a rare sense of vastness. Not that Westhampton is on a small acreage, it is not, and Raynor used the 140 acres well. Nonetheless, when you consider the prevalent windy conditions, there are several spots on the back nine where you might sense being cramped on a crowded summer weekend. Perhaps this intimateness led Raynor to focus so much detail on the green contouring.

Only on Long Island could this course still be a well keep secret. Think about the variety it offers. A first rate set of one shot holes. Three very appealing short two shot holes. A pair of fine three shot holes. A stretch with numerous tough 440 yard holes. And all these holes are capped by a superb set of greens. How good is it? Even Raynor’s mentor Charles Blair Macdonald would have been complimentary of his pupil’s first effort!