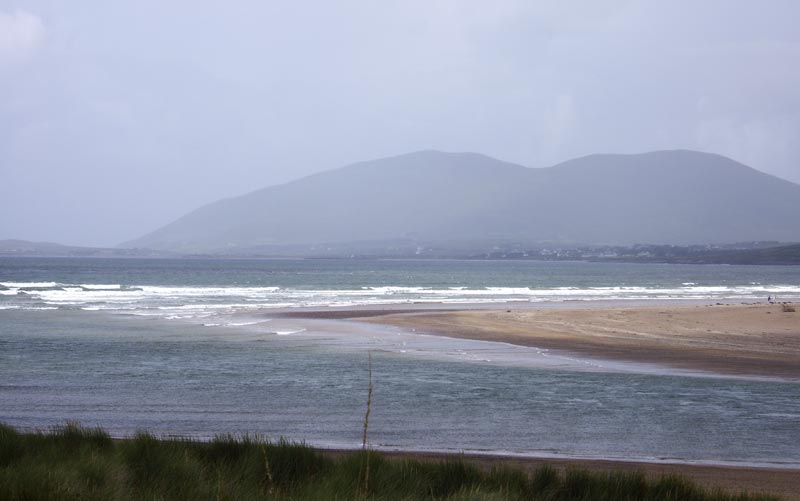 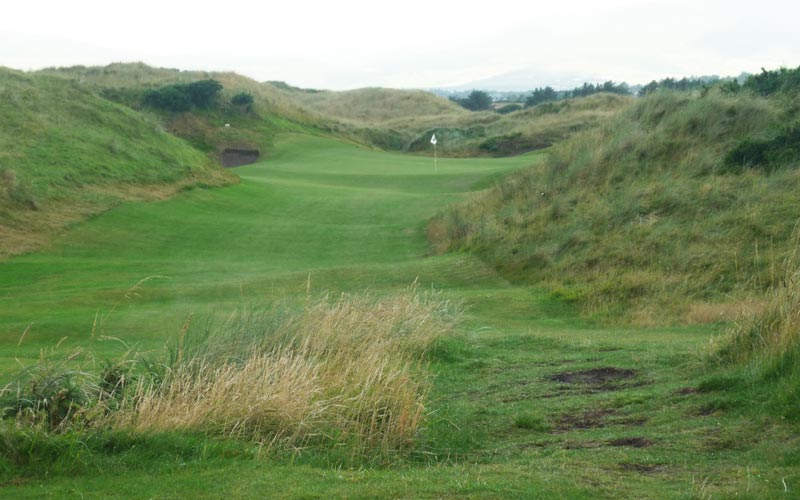 … and Waterville capitalizes on its setting by providing an environment for golf that is free from outside disturbances by man. From start to finish, the golfer is alone in nature and is free to concentrate on one of the game’s great examinations. Pictured above is the one shot fourth.

Links typically fall into one of two categories.

The more famous is the big links that stretch close to or over 7,000 yards and are capable of handling such tournaments as the Open. Carnoustie or Royal Birkdale are examples but rarely do such courses produce lasting passion. You respect them and a well played round there is gratifying indeed but you don’t reflect upon them on your deathbed.

The other category is often referred to as holiday courses and includes such gems as North Berwick, Machrihanish, and Cruden Bay. What they lack in length they make up for in charm. Indeed, these courses often produce more passionate comments from overseas visitors than their bigger counterparts.

Well, what if you were to combine the two type courses? Have a course that both required broad shoulder hitting but also featured exhilarating moments as well? You would have a St. Andrews or a Turnberry, courses that endlessly appeal to all level golfers.

Such a course is Waterville, located in a remote fishing village in southern Ireland. This course has long been known as a stern test and has been called the longest course in Europe. It is also one of the windier spots as well, so the challenge is already evident.

However, what is not nearly as well known or appreciated is the variety found within the course. It contains three superb one shot holes as well as another three excellent three shot holes. No other course in Ireland or the United Kingdom can make the same claim. In between, there is not a single indifferent two shot hole, which prompted Henry Cotton to remark, ‘I have never seen a more consistent succession of really strong and beautiful golf holes than here.’

Eddie Hackett deserves most of the credit and first laid out the course in 1973 at the request of John Mulcahy, who had returned from America to pursue his dream course. Mulcahy fell in love at first sight with the sand hills that are bordered by Ballinskelligs Bay on one side and the River Inny on the other. The course is spread over these sand hills on a 220 acre peninsula and never feels cramped.

In 1987, nine Wall Street executives with Irish/American backgrounds purchased the property from Mulcahy. They hired American architect Tom Doak to present them with a several year master plan so that any refinements would be done in a consistent manner. Over a decade later, their patience has been handsomely rewarded. For instance, the recently completed new 4th and 18th tees are located on the top of their respective dune lines, as opposed to their more sheltered prior position. The tees provide great theatre and help instill a sense of drama rarely found on courses of such length. Yet, the new tee placements are completely consistent with how Eddie Hackett intended the holes to play.

Second hole, 465 yards; Christie O’Connor Jr. once selected his favourite 18 holes in Ireland and famously selected two holes only from one course: Waterville. He chose the 2nd and the 16th and such is the merit of the course that numerous other holes could have likely been selected. 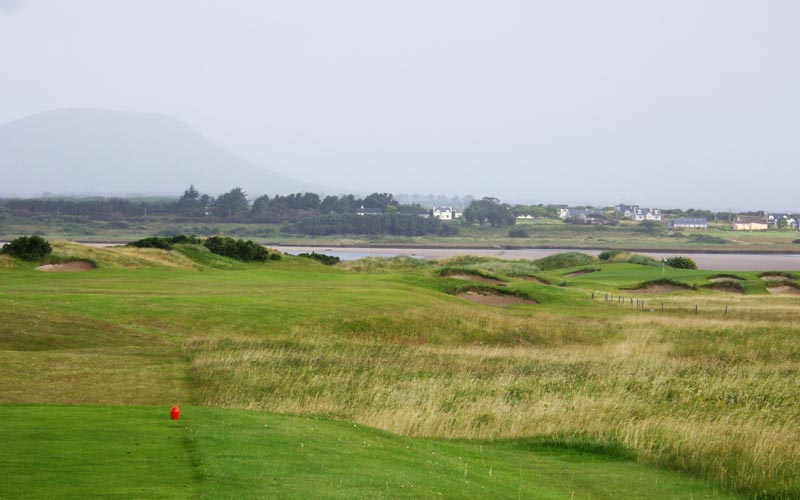 O’Connor considers the long two shot second one of the country’s best.

Third hole, 415 yards; An example of Mulcahy’s helping Eddie Hackett to produce his finest course. Originally, Eddie Hackett had the green placed in a natural amphitheater framed by dunes. During one round, Deane Beman suggested to Mulcahy that the hole would be even better if the green was moved some fifty yards to the right and placed within several yards of the River Inny. The infectious Mulcahy was overseeing that very change the next day and one of Ireland’s finest holes emerged. 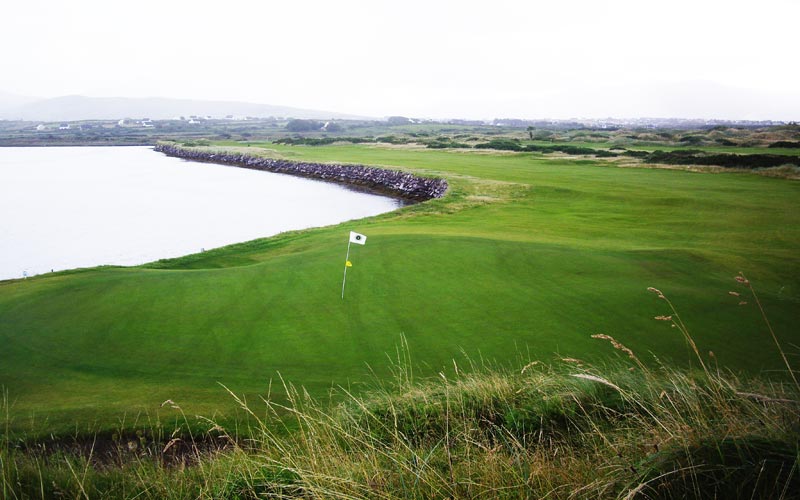 As seen from behind the green, the third is full of challenge despite the fact that it plays across flat land.

Fifth hole, 595 yards; A type hole sadly missing from most links courses, these genuine three shotter doglegs to the left at a pair of bunkers on either side of the fairway at the 130 mark from the green. Unfortunately, the golfer has to hit three well thought out and placed shots to have any chance of a par. 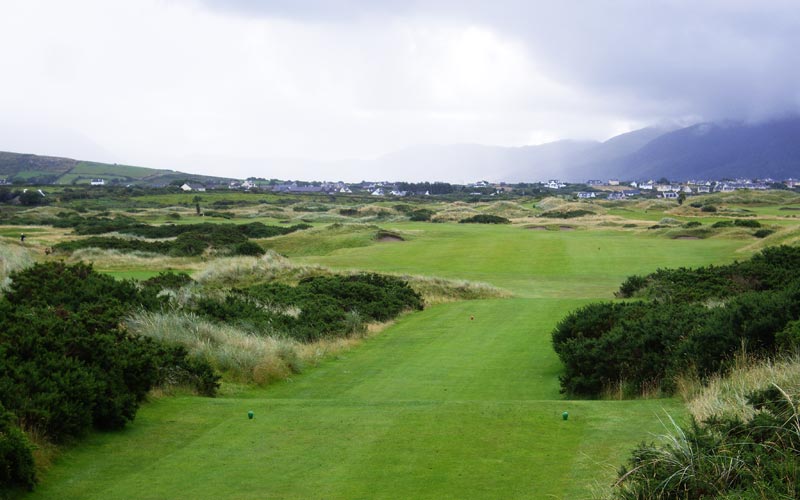 The long fifth sweeps to the left. 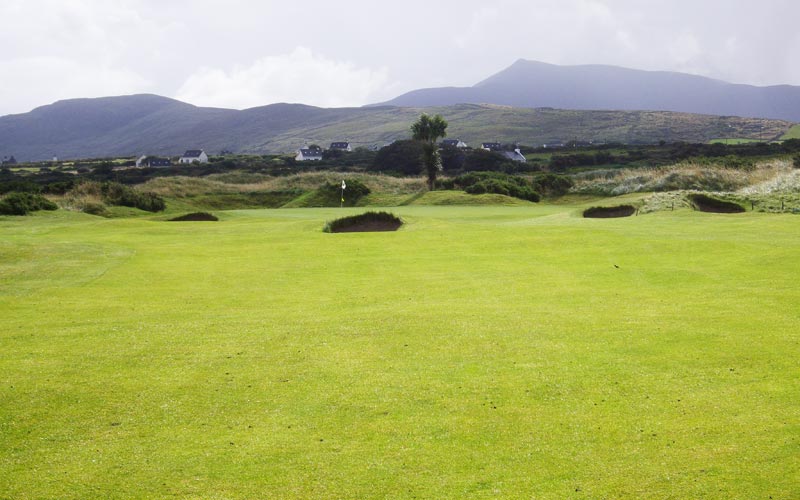 The bunker in the foreground is a fooler as it is fifty-five yards from the center of the green. The palm tree back drop makes for a conversation piece.

Eleventh hole, 495 yards; A great natural hole as it twists through the biggest dunes on the course. Downwind, a big drive will catch a ridge at the 280 yard mark, further propelling the ball along and leave the golfer with only a short iron into the green. 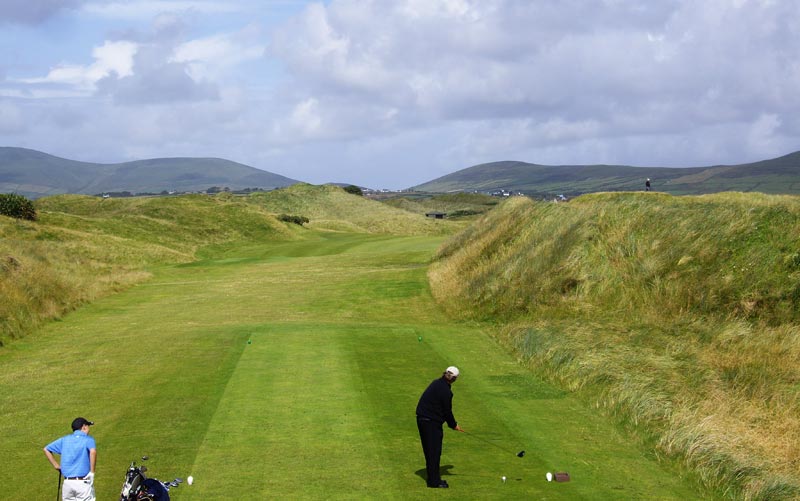 The eleventh at Waterville is rightly considered the best three shot hole in Ireland. 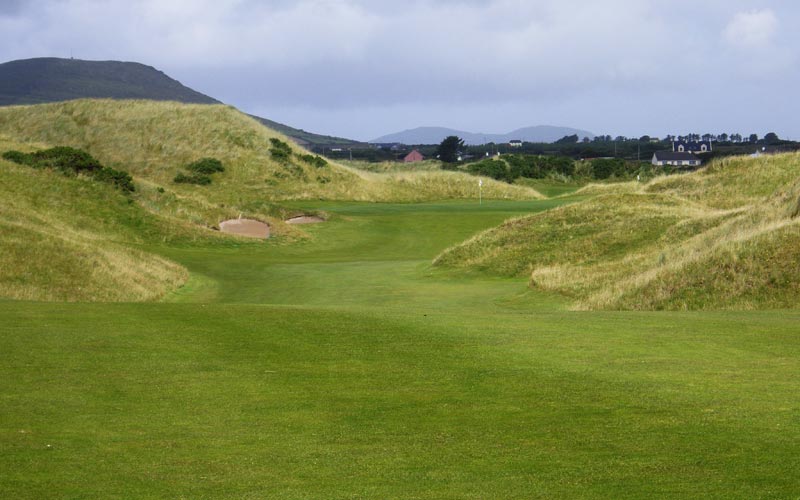 A striking hole, Hackett routed the eleventh fairway between two rows of dunes before climbing to the green.

Twelfth hole, 200 yards; The equal to the more famed seventeenth hole, this one shotter plays from dune top to dune top and was a favorite of Eddie Hackett‘s. The green was originally to be placed in the valley. However, in days long gone by, Catholics used this hollow for Mass as they feared persecution. As such, the ground was considered sacred and the green site was wisely moved to the top of the far dune. The result is a searching long iron shot. Eddie Hackett’s design at the twelfth was originally bunkerless. Fazio Design added the front right one to provide a greater range of potential recovery shots. 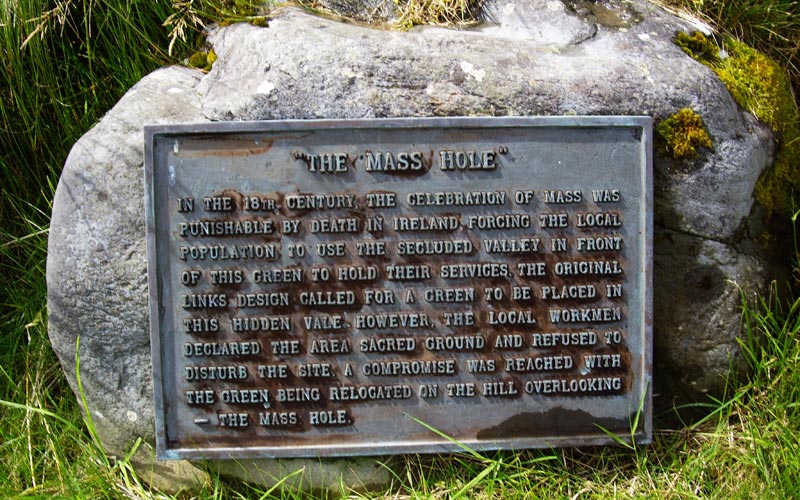 Fourteenth hole, 455 yards; This hole encapsulates the appeal of Waterville to the author. Though full of challenge, nothing is forced or contrived. Eddie Hackett gives the golfer plenty of room to play (a must in such windy environs) and the hole plays equally well in any wind. Two bunkers are carved into a hillside some 40 yards short of the green while the green itself remains bunkerless. Figuring out how to best approach this long diagonal green given the day’s wind and hole location remains fascinating, day after day, week after week. No wonder Mark O’Meara and Tiger Woods chose Waterville as the place to hone their games for the Open. The fourteenth epitomizes Waterville in that it is a tough test but one that is full of appeal.

Seventeenth hole, 195 yards; The elevated tee is the highest point on the course and is aptly named Mulcahy’s Peak (indeed Mulcahy’s ashes are buried here at his request). The evolution of the course is evident from the tee: the long beach behind you was the source of sand that has blown in the direction of the golf course for hundreds of years. This sand first hit where the back nine is now laid out and thus the greatest sand hills are on this part of the course. As less sand was carried across the course in the wind, the sand dunes diminish in size to the furthermost point, which is the rather flat 1st hole. While fascinating to see and appreciate the evolution of this course, the golfer must now turn his attention to the far green, which is not much of a target when the wind is blowing from the south east and the golfer is gripping down on his driver. On a calm day, there are few more glorious spots as you are perched 250 feet above sea level with sweeping views of the mountains and the sea. Played from one peak to another, the seventeenth tee box can be a lonely place, especially when the weather starts to set in.

Eighteenth hole; 580 yards; Ireland is peculiarly devoid of fine finishing holes. Ballybunion, Lahinch, Tralee, and County Sligo all offer little to remember. Only Portmarnock’s could be considered a world class finishing hole. Now with the addition of the new tee on top of the dune line, Waterville‘s must surely count as the country’s most thrilling finishing hole. One wrong step off the championship tee and the golfer will soon find himself rolling 200 feet down to the beach below. With the prevailing wind coming off Ballinskelligs Bay, the golfer must flight his ball along the dune line and let the wind drift it back onto the fairway, which tumbles downhill all the way to the green. The shot requires great nerve, especially at this point in the round. A great swing hole, where more than two strokes may readily change within your match. There is no place to hide from the wind on the exposed eighteenth tee.

There are two misconceptions about the course. Firstly, that the two nines are unequal. While the second nine is laid through the bigger sand dunes, the finest four hole stretch on the course is the 2nd through 5th hole. Indeed, Jay Connolly, one of the new owners, notes that the front nine plays harder day in day out than the back nine. Secondly, some people view the formal water hazard in front of the 7th green as artificial. The fact is this is the lowest point on the property and the ground drains that way from every side. The Club is just as well to have formalized the water hazard as to have left it in some bog-like state.

Waterville as a village of some 400 people has been a part of much history. The first transatlantic cable between Europe and the United States came ashore in 1880s. Indeed, people from that operation where the driving force for the original creation of a rudimentary nine hole course on this property. Later, Charles Lindbergh did a famous fly over on his way to successfully completing his famous New York to Paris transatlantic flight.

Waterville‘s remoteness naturally adds to its charm. However, it also precludes major events from being played on this course as certain logistics would overwhelm the small village. This is a great pity for Waterville would make a superb selection for the 2005 Ryder Cup. More importantly though, it is a great place for friends to meet for a several day retreat. The course will keep you endlessly entertained, both through its sheer challenge and by the number of thrilling shots you will be asked to hit.