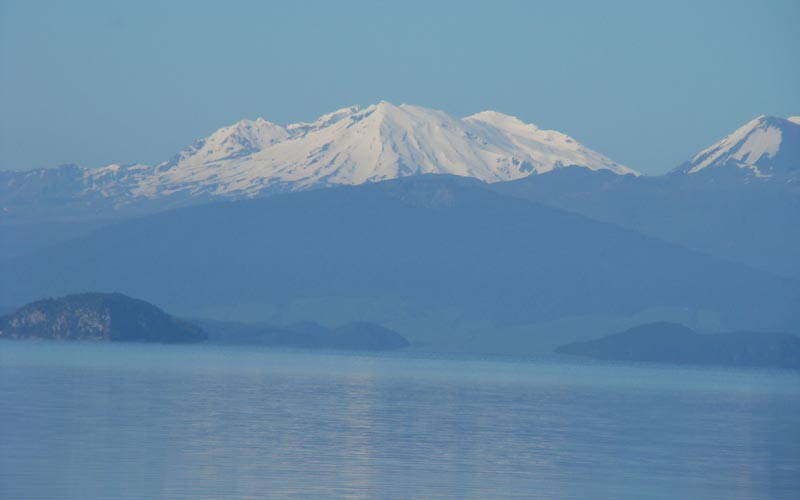 The natural splendor of the Lake Taupo region has lured travelers for decades.

When the cornerstone World Atlas of Golf was published in 1977, two courses from New Zealand were featured. One was Wairakei and the other was Paraparaumu Beach some two hours south and west. The two couldn’t be more different and they highlight the beautiful country’s diverse landscape.

Whereas Paraparaumu Beach is located along the Kapiti Coast and features crumpled land that rivals any links in the world, Wairakei is set in a valley in the middle of the North Island with mountains all around. The fairways themselves are generally broad and a level stance more often than not greets the golfer. It features two par fives of lasting merit (the third and fourteenth) and a strong collection of long par fours. Stout hitting is required and the golfer is blessed with a first rate environment in which to do it. Watching the flight of the ball in the clear valley air against a backdrop including enormous fir trees is a rarity for this part of the world. No wonder the New Zealand government owned Tourist Hotel Corporation commissioned Commander John Harris, Michael Wolveridge and Peter Thomson to build a course here in 1970.

In 2008, the new owner Gary Lane from Auckland took the unprecedented step of erecting a six foot tall ‘pest proof’ barrier fence around the property’s 385 (!) acres. Nearly gone now are mice and cats. Instead, Lane is cultivating indigenous animals and vegetation. Scotch broom for instance will soon be replaced by native bush, in addition to the already existing pine and larch plantations and grassland habitats. Lane’s hope is that native birds like the tui, kereu, and bellbird will once again find this area to be a fine habitat with abundant food sources.

Second hole, 235 yards, Awaawa (Dry Valley); This is a tale of two holes. Played from the elevated back tees, it is a thriller over a dry river bed across rumpled land to a green defended on either side. Unfortunately, the forward tees are on the far side of the river bed, making the hole much more mundane. 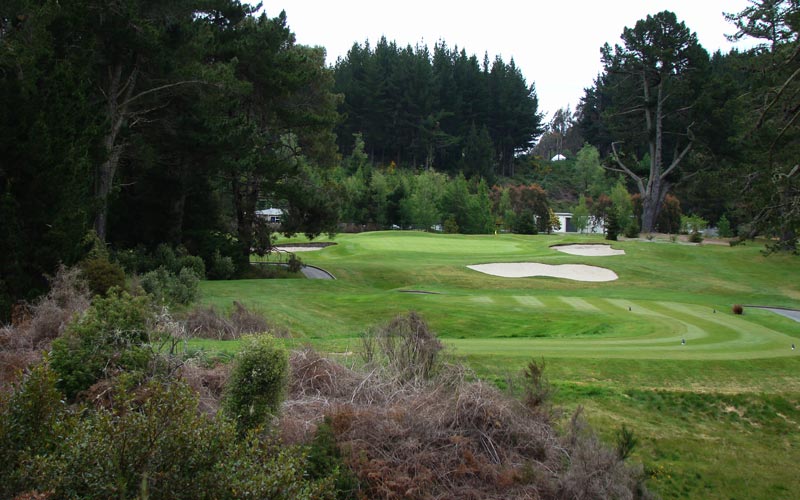 As seen from the back markers, the second is a thrilling one shotter played over a deep dry river valley to a distant green.

Third hole, 555 yards, Karapiti (Broken Old Man); Many golfers walk away from their round at Wairakei in a better mood than when they showed up. In large part, they will attribute that to the presentation of the course which is free from all outside disturbances and the gorgeous long distance views of the surrounding mountains. However, closer study of the property shows that it is ideally suited for golf with a network of gulleys and valleys running throughout the property. 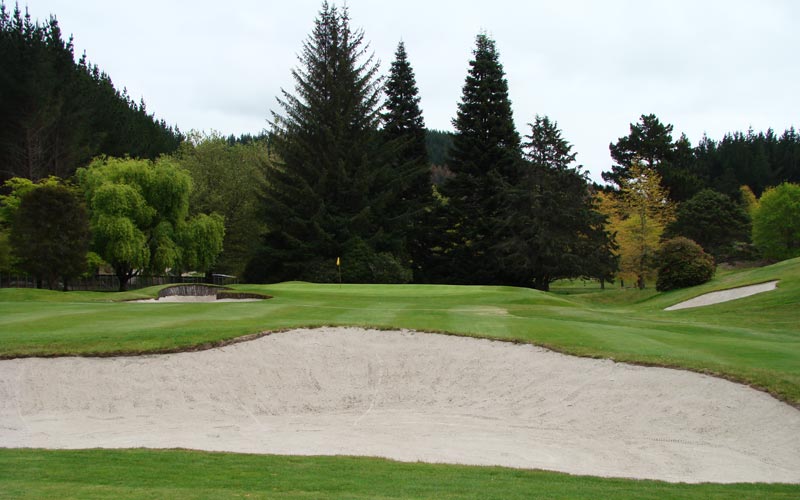 Fourth hole, 375 yards, Old Oak; While the hole plays toward a specimen oak tree behind the green, the tree that actually influences play is a large evergreen some 230 yards off the tee that protrudes into the left side of the fairway.  Brad Faxon once commented that trees were one of the last effective ways to make players shape the ball. In particular, he was referring to the shot making requirements found at Harbour Town in Hilton Head, South Carolina (which coincidentally was built at the same time as this course). Similarly, the skill to work the ball either way on demand is something that the architects flushed out at Wairakei.  Wolveridge and obviously Thomson were masters at working the ball and they gave other players the ability to show a comparable talent. 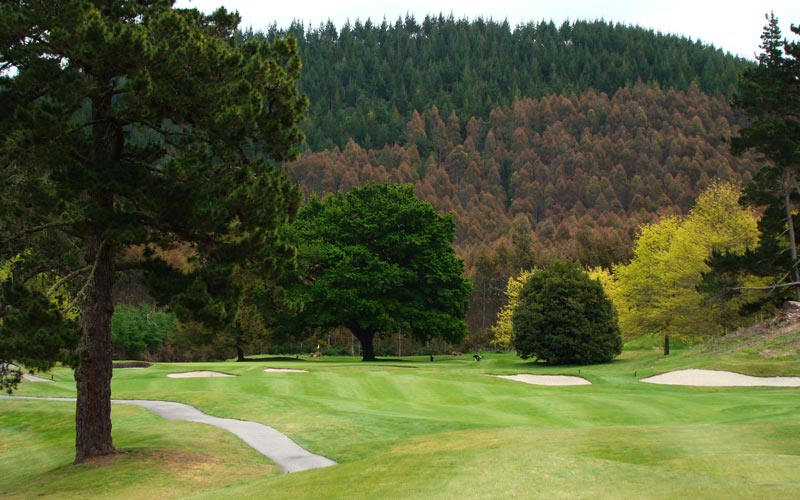 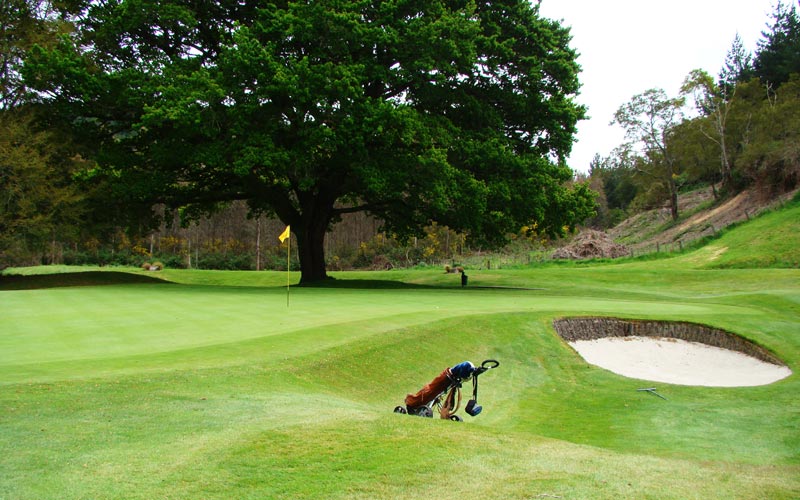 …to hit a fade into the narrow fourth green which is angled from front left to back right.

Sixth hole, 480 yards, Rawhiti (Sunrise); The sixth tee is one of the more exhilarating spots found in inland golf as long views are afforded over a broad landscape. The hole plays as well as the view, with golfers delighting in the sight of their tee ball landing past a large fairway bunker and then tumbling down a twenty foot hill. 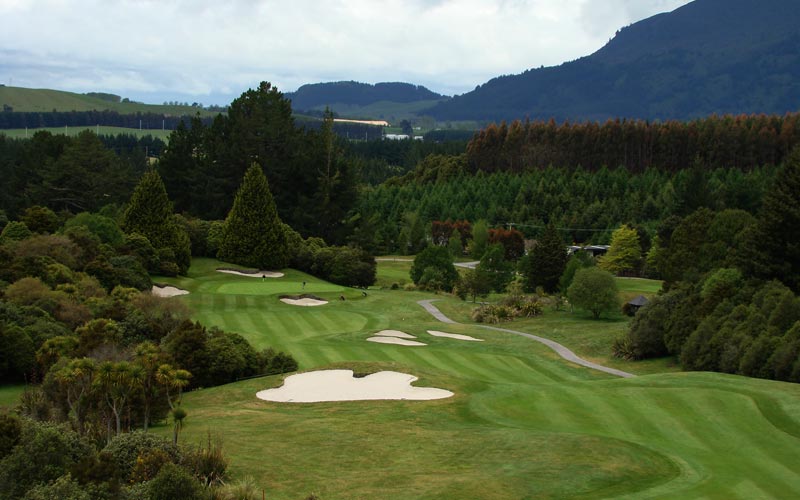 If the golfer can carry the large bunker in the foreground from the tee, his tee ball will enjoy a huge kick forward and an additional thirty plus yards of roll. 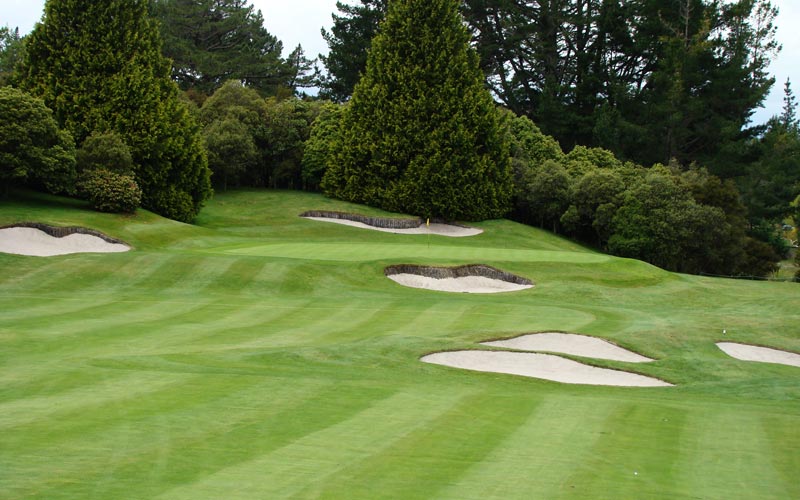 A big drive that finds the flat of the fairway may leave the golfer only a mid to short iron in on this long two shotter. 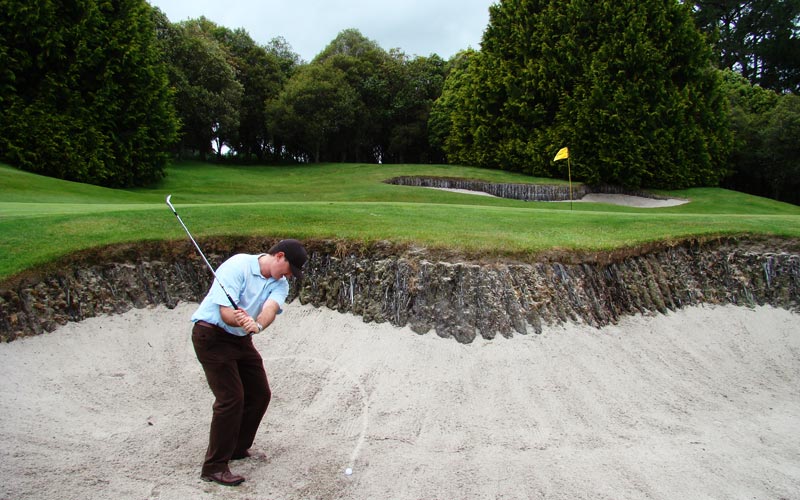 Of course, the central bunker at the base of the plateau green receives a lot of visitors.

Eighth hole, 385 yards, Farmer’s Folly; Wairakei has five par fours that measure less than 400 yards and four of them are played in the stretch from the seventh through the twelfth. This one is the hardest of the bunch with both the drive and approach requiring pinpoint accuracy. 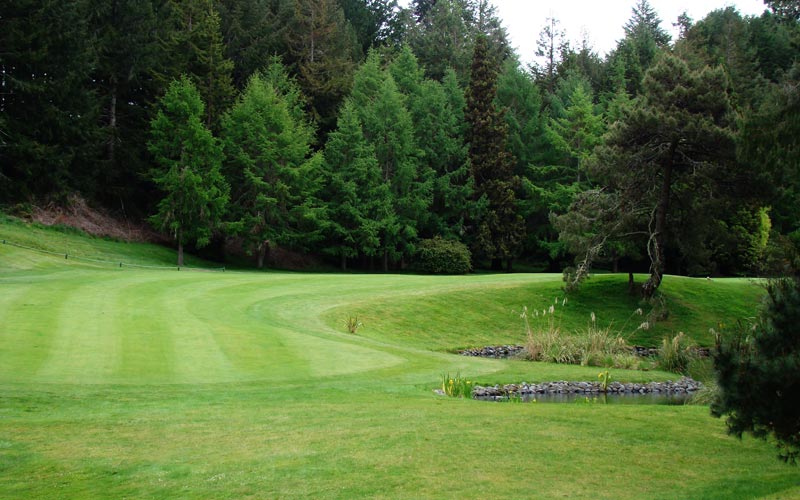 Don’t be deceived by the relatively placid view from the eighth tee. The fairway dips toward the newly constructed pond on the inside of this dogleg right. Tee balls hit in the right edge of the fairway have a disturbing ability to find the water. 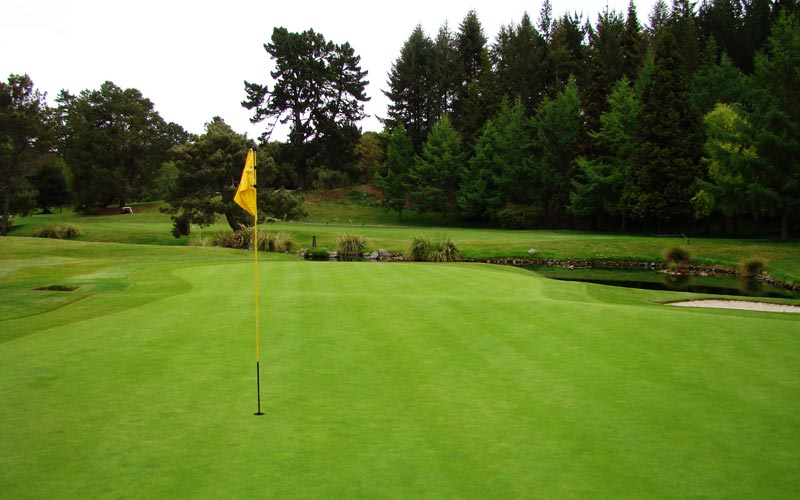 As seen from behind, the eighth green is 38 yards in depth and features a lower tier at the front. With a back right hole location such as the one above, the golfer likes to position his drive long down the outside of the dogleg.

Thirteenth hole, 440 yards; Tongariro (Taken south); Having played the hole five times now, the author has settled on aiming at the large right hand bunker off the tee with the longest club that is guaranteed to stay short of it. From there, it is still a mid-iron into a deep push-up green that is pinched in on both sides by bunkers. 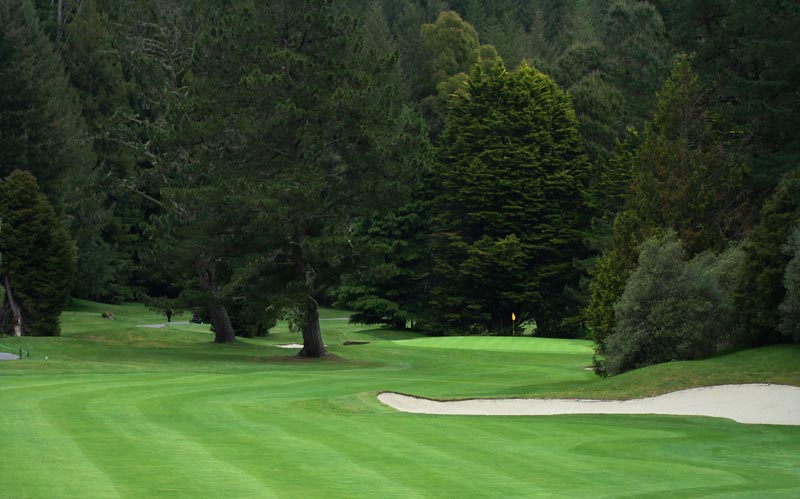 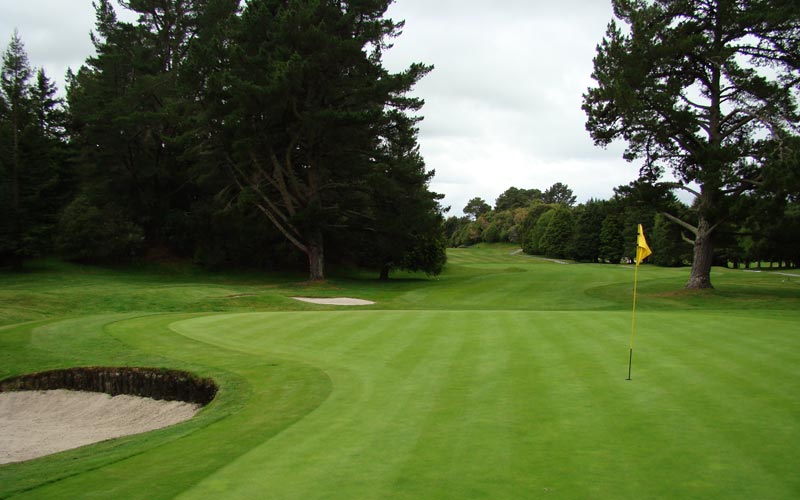 … and find the push-up green. As seen from behind, the green narrows in the back with bunkers left and right.

Fourteenth hole, 600 yards, The Rogue; The first feature that can break the golfer here is the two hundred foot tree found 150 yards from the green and the second is the immense elevated horseshoe  green. Though the tree has garnered most of the attention over the course’s first forty years, that may change as the tree has taken several lightening hits and has been limbed up much higher than in past decades. Regardless, the green itself which is nearly sixty yards (!) wide is at the heart of the hole’s challenge. 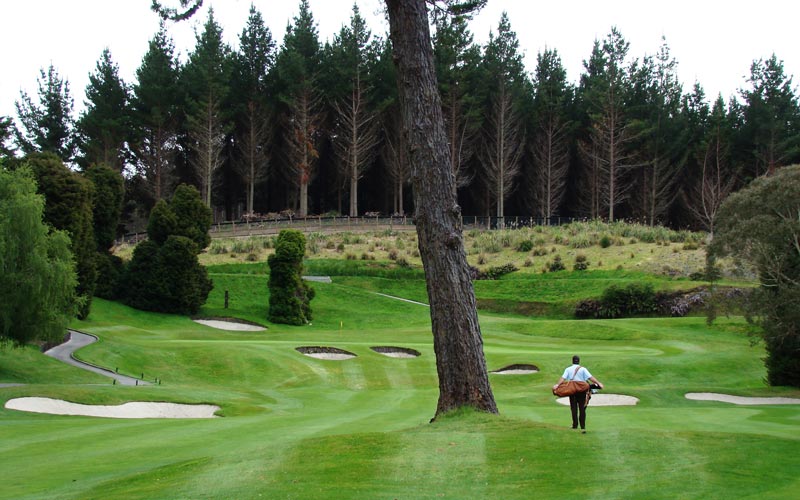 This enormous pine in the middle of the fourteenth fairway has been a controversial feature ever since the course opened. Given that it is limbed up so high today, there is no reason for golfers to continue to think ill of this central hazard. 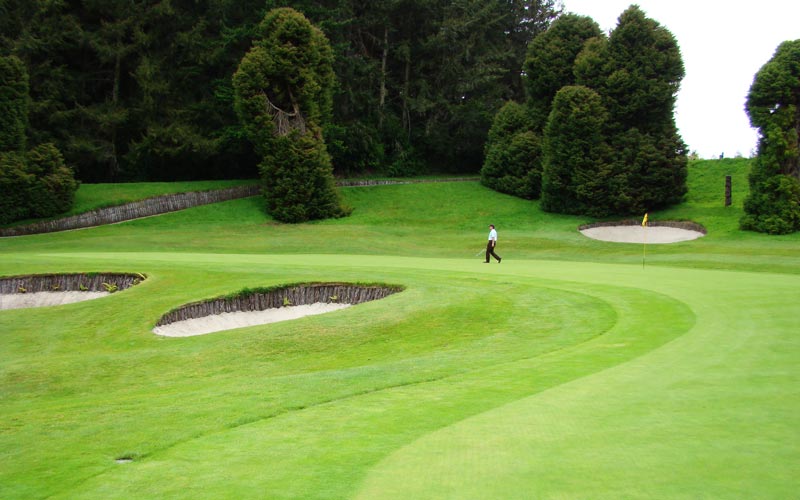 The real showstealer of the hole is its boomerang green, which measures 57 yards in width and tilts from back to front. 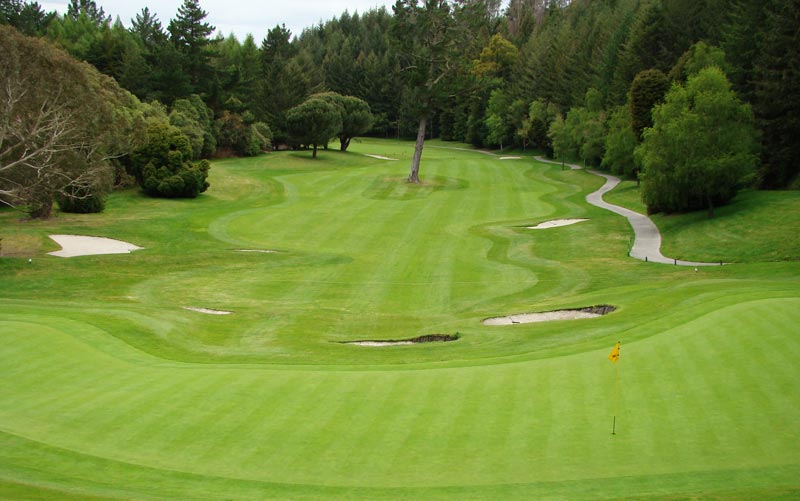 The vast range in hole locations changes the playing angles of the fourteenth an almost unheard amount.

Seventeenth hole, 435 yards, Kaapo (Blind shot); Appropriately named, the tee ball is the only blind one on the course and it is also one of the most interesting as well as the golfer is forced to hit over a fine natural landform. Having been made popular by both Robert Trent Jones and Dick Wilson, greens that were wider than deep were in vogue during this period of golf course architecture. There are six such examples at Wairakei (namely, the fourth, fifth, eleventh, twelfth, fourteenth and here at the seventeenth) all fall into that type. What’s unusual here though is that the golfer may frequently be coming into this green with a much longer club than the other holes. 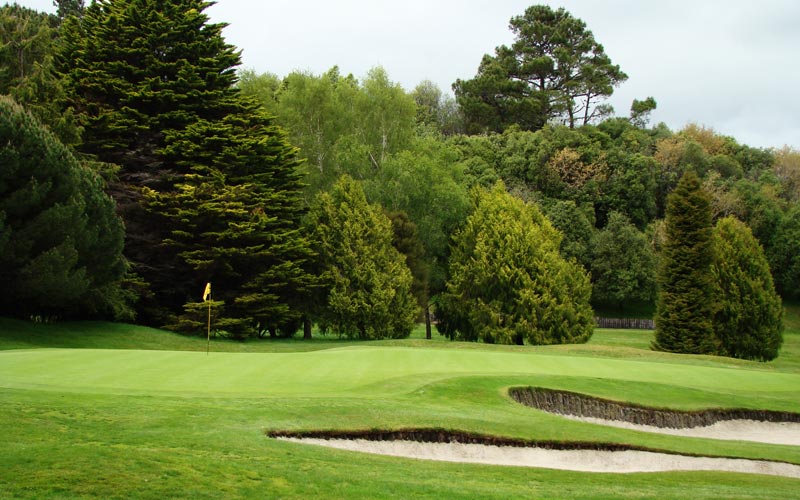 As seen from the left, the seventeenth green is none too deep for such a long hole.

Between Paraparaumu Beach and Wairakei, the knowledgeable student of architecture can clearly select which course belongs to which era of course design. The fact that the course that had the big property was built in the 1970s is good just as the fact that the course that had intricate landforms was built in the 1940s. The small greens of Paraparumu Beach would seem out of character with the scale of the property here just as these heavily shaped greens would be out of character with the natural landforms at Paraparaumu. As they are now, the holes fit the land as they comfortably sprawl across the land.

Times are changing in New Zealand. In 2000, the ‘name’ local architects like Bob Charles were muddling up the stunning land they are given. Now, the finest modern day architects including Tom Doak and Jack Nicklaus are being brought to New Zealand. Cape Kidnappers and Kinloch are the immediate results and more architects will come as the land is that good. Regardless what the future holds, smart golfers will take advantage of both experiences already on offer at Paraparaumu Beach and Wairakei. 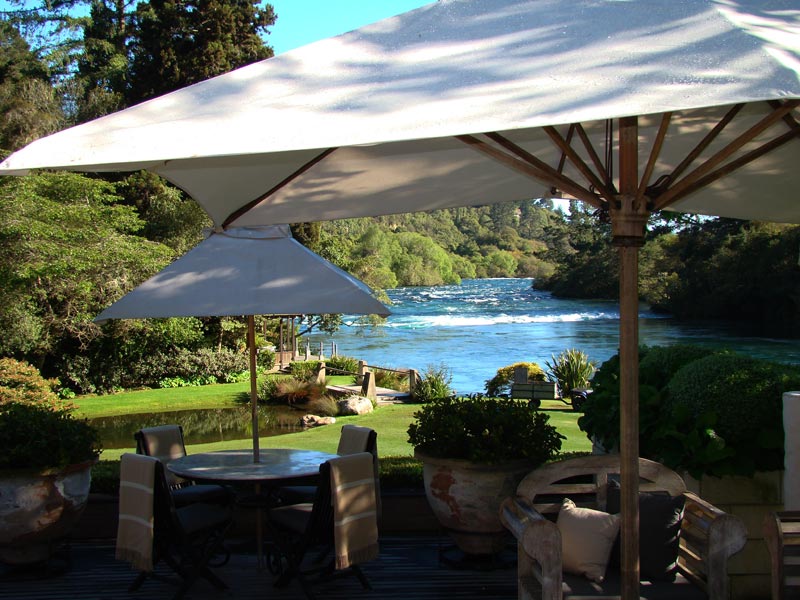 Just a few kilometers from Wairakei is the internationally known – and loved – Huka Lodge.