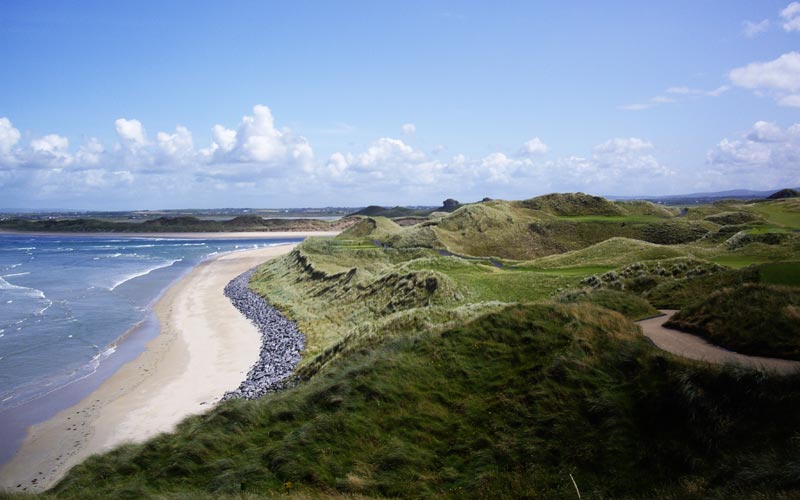 For sheer exbuberance, the setting of Tralee is tough to beat.

The design of the golf course at Tralee polarizes golfers. Some swear by it as among the finest and finding playing elsewhere to be a bit boring. Others contend the two nines are too disparate and the course has too many all-or-nothing shots to be considered great. How can both views exist among reasonable men?

As for the first point of view, those who endlessly sing Tralee‘s praises, a large part of their reasoning lies in the course’s setting. Its appeal is impossible to overstate but Peter Dobereiner did well when he wrote, ‘Robert Louis Stevenson was wrong, and by a long chalk, when he described the Monterey Peninsula of California as the finest conjunction of land and sea that this earth has to offer. As a spectacle Tralee is in a different class.’ In recent times, Old Head of Kinsale has received considerable attention for its setting but it too falls visually short of the diverse glories on offer at Tralee. 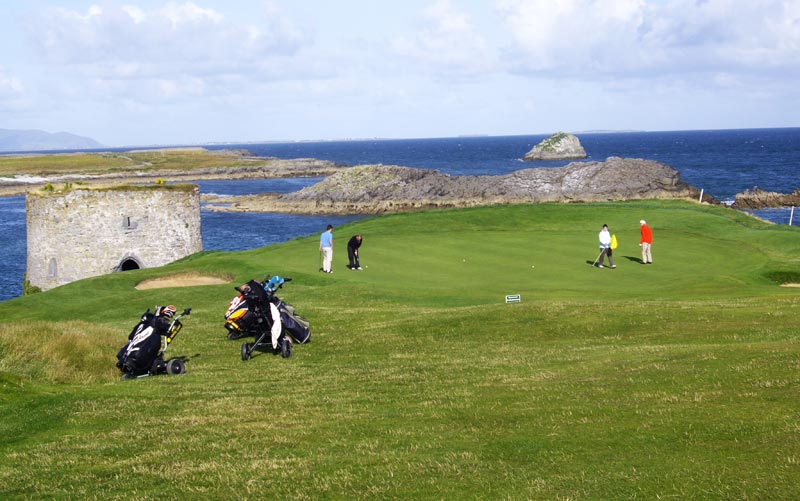 Though the biggest dunes are found on the second nine, the views afforded when playing the front are just as captivating.

Pictures will never capture the sight that awaits you upon first seeing the course and no man could be faulted for falling under its charms. However, the important thing is the golf, so how about the specific holes themselves? Are there compelling shots and does the course strategy draw you back again and again?

In analyzing the course, the Club’s instructions to architect Ed Seay should be considered: build us as many spectacular holes as possible. On more than one occasion, Ed Seay had to be talked into some of the final green placements. He advised them that the third green out on a promontory would need to be replaced virtually every year. He thought the twelfth green located directly above an eighty foot chasm on a 440 yard par four was excessive. He worried that the back markers on the sixteenth tee would require a driver on some days, and even then the ball could still end up in another deep chasm.

And yet the Club told him to press ahead with all of them. The biggest reason? They, like most in Ireland and the United Kingdom, prefer match to stroke play. As Archie Baird, the curator of the golf museum in Gullane, Scotland recently remarked, ‘Americans are killing the game. Look at them after a match. You have four unhappy men bent over their scorecards frowning. With match play, at least two men are always smiling!’

This same belief helps explain why the members of Tralee swear by their golf course. Who can blame them? Tralee offers many incomparably thrilling moments; only a scorecard and pencil mentality could ruin the day’s fun.

The open front nine is set across a broad field that sweeps down to the ocean’s edge. Three compelling holes along the cliffs (the second, third, and eighth) are obvious highlights. Though not nearly as dramatic as these holes, the two shot holes from the fourth through the sixth are fine and solid holes in their own right. When combined with the short seventh, the golfer appreciates that Ed Seay‘s clever routing has these four holes pointing in opposite directions and that he made the best use of the only prosaic part of the property. 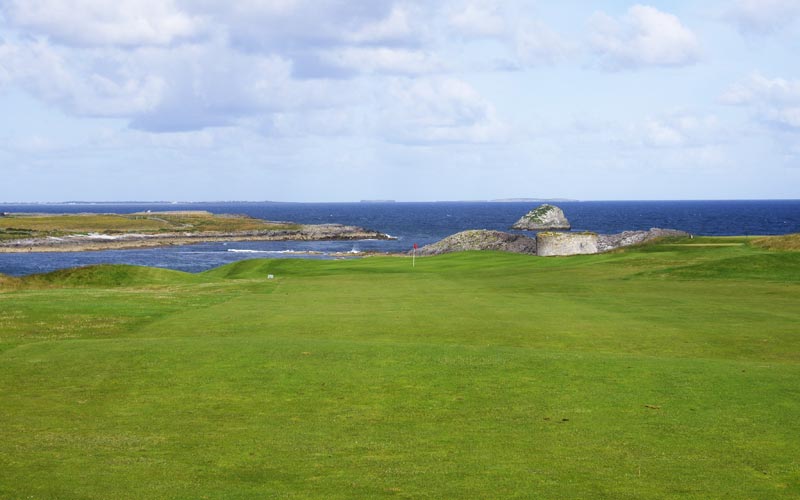 The approach to the fifth sets up just fine.

The back nine is set among dramatic dunes and unique holes are the result. The three shot eleventh twists its way up a massive hill and can be a heartbreaking hole. Nonetheless, its originality is captivating, at least to the  author. Ed Seay also did a fine job building several deep bunkers into some of the slopes such as front right of the tenth green or to the left of the fourteenth green. The sloping terrain helps gather the ball into these pits but the resulting recovery shots add short game interest to the course.

Tralee is not without its weaknesses. The closing holes on each nine are just means to climb back towards the clubhouse. However, as for the argument that the nines are too disparate, the author would disagree. Unlike a Spyglass for example, the sweeping views are equally dramatic on either nine at Tralee, and this continuity of grandness helps tie the nines together.

Second hole, 565 yards; One of the world’s most memorable three shot holes, this dogleg to the right wraps around the cliff’s edge and is a classic with each shot becoming more exact. The long second sweeps to the right, always hugging the cliff line. 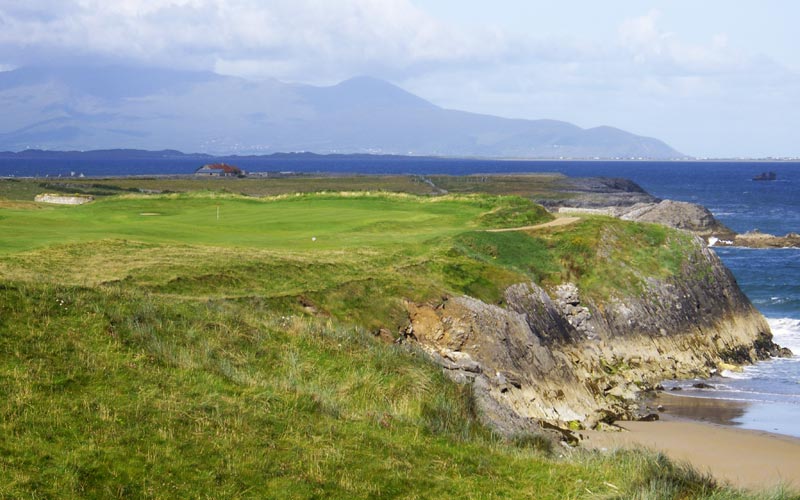 Imagine the thrill of having a go at the distant second green in two.

Third hole, 200 yards; How to judge this hole? When in play, it is a thriller, with the rocky cliff in between the tee and green. The golfer aims over the ocean in hopes that the usual westerly will blow the ball back onto the well defended green. However, the rub is that this cliffside green is out of play more times than not and the inland substitute hole is of no great merit. Still, given the once in a lifetime chance to create such a hole, the Club did well in pushing the architect to take the risk, even though it only periodically pays off. 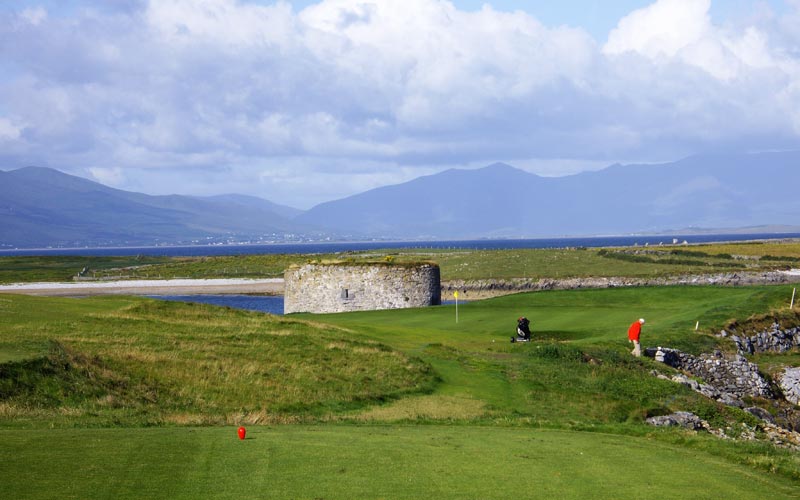 Despite issues in growing grass in an exposed area that is subject to salt spray, the exciting third simply had to be built.

Eighth hole, 375 yards; The architecture is as good as the setting, no small feat. Ed Seay used the curvature of the coastline to great effect on this dogleg left and the medium size green contours are the best on the course. A large dune protrudes into the right side of the fairway 135 yards from the green. The golfer either elects to lay back from it off the tee or perhaps can skirt his drive past it to leave but a short iron in. 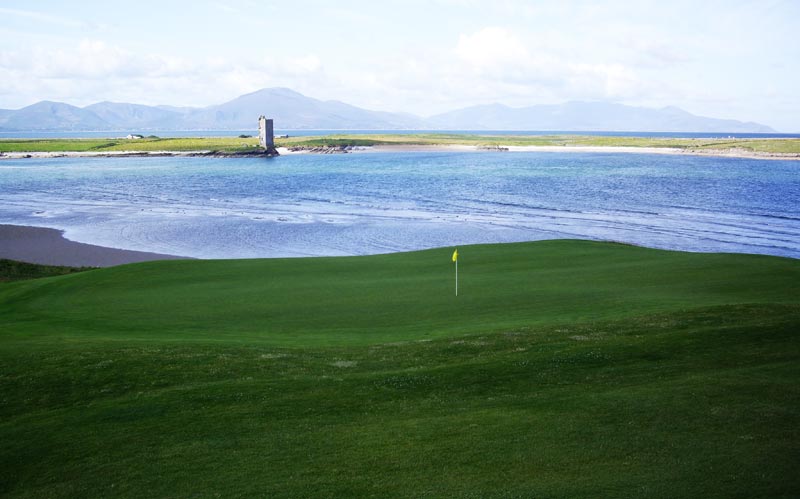 As seen from the side, the eighth green is both long and full of contour.

Eleventh hole, 595 yards; Given the massive landforms found on the second nine, the holes that emerged were always going to be a hit or miss proposition. Some detractors grumble that the holes are too severe/too unconventional, which to a certain extent is just a reflection of their personal taste. That’s fine but what would have been more of a crime would have been to yield perfectly fine but more mundane holes by drastically reshaping the landscape in an effort to conform to prosaic modern day norms. 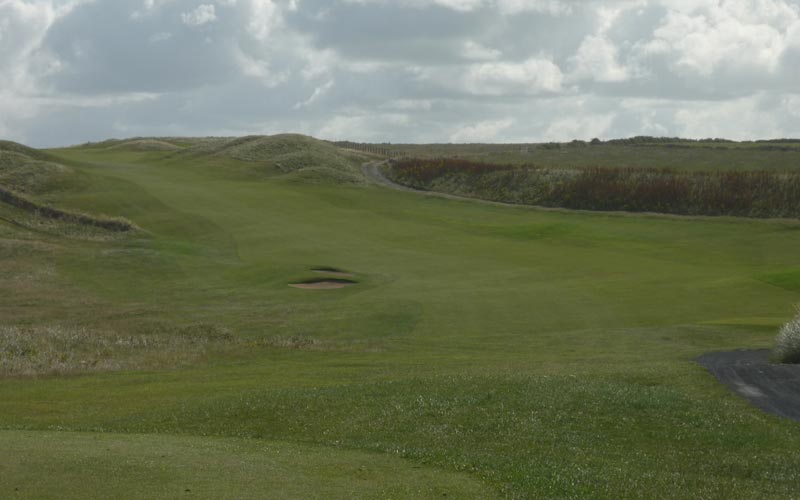 The eleventh is a slow long climb uphill. 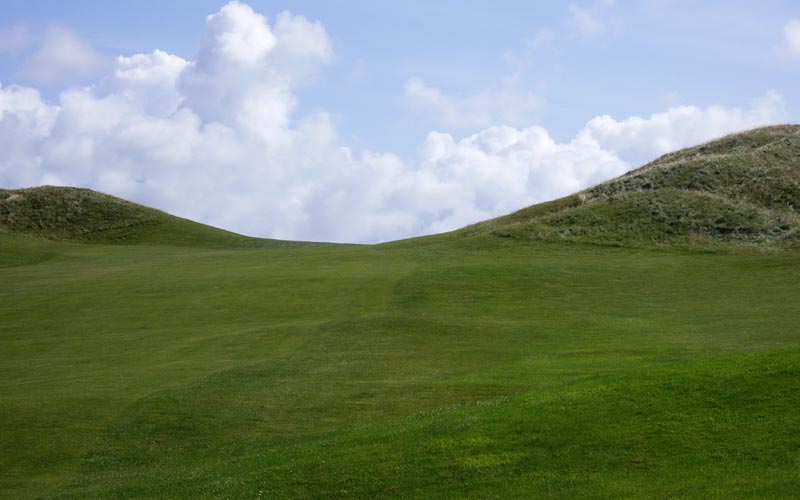 The typical second shot, one which irks some golfers, is uphill and blind.

Twelfth hole, 440 yards; A love it or hate it hole, but based on the fact it is the same for everyone, the author loves it. The match play mentality of the membership ensures they appreciate it as well. Others say an eighty foot chasm in front of a hole of this length is over the top, but they are generally the same people who play stroke play. The right half of the green is open in front and the green accepts a running shot as it is heavily sloped toward the golfer and from the right. 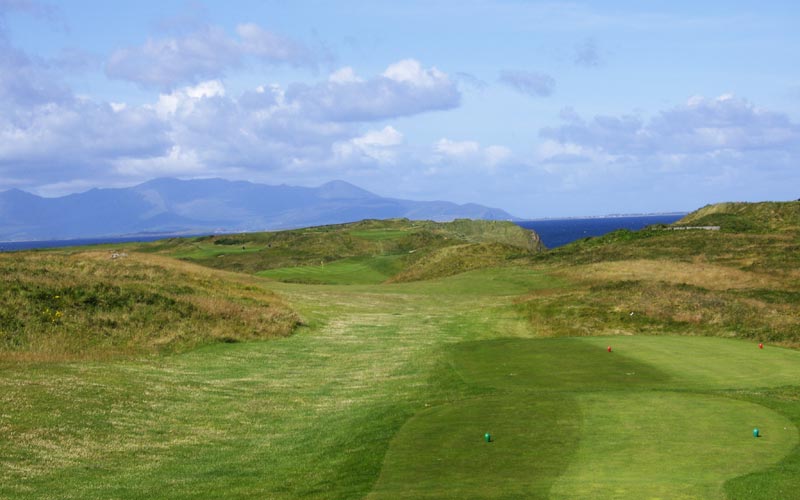 Thirteenth hole, 160 yards; The golfer is now in the heart of the biggest dunes on the property. Not surprisingly, Ed Seay found that the best way to play over and through these massive landforms was by including two par threes and two medium length par fours. This is the shortest one shotter on the course (most members play it from ~130 yards) but it wreaks havoc on nearly the same scale as the more famous seventeenth at TPC -Sawgrass. The green is on a narrow ledge that, truth be told, is a shade too narrow for such a windy setting. Both in front and behind is death in the form of tall dunesland grass from which all the golfer can do is hack out, assuming he even finds his ball. Still, who can deny the high octane thrill of properly executing a controlled tee ball low under the wind and seeing it find the putting surface?! Though it doesn’t really constitute good golf, the deep, choking grass that fronts the narrow shelf green is a formidable hazard. Pity there isn’t a way to cut bunkers into the hillside as at least then, recovery shots might at least be possible.

Looking back over the thirteenth green, what a challenge it must have been for Seay in routing holes on such heaving landscape.

Fourteenth hole, 405 yards;  When faced with a broad right to left slope, Ed Seay cleverly devised a split level fairway, which gives all level of golfers the change to be hitting their uphill approach shot from short grass. Of course, one side/level of the split fairway offers a distinct advantage from which to play. The golfer skilled enough to hit and hold the narrow high right fairway is rewarded with the easiest approach.

Fifteenth hole, 300 yards; All kinds of options exist including trying to drive this green when the wind is behind. 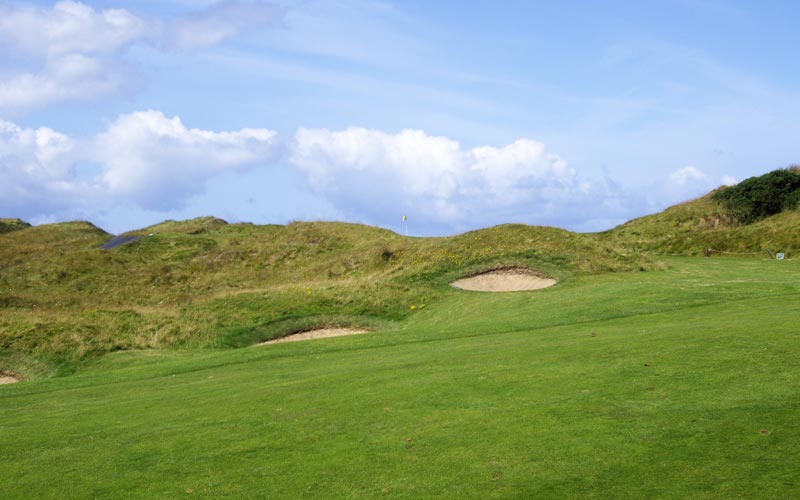 Most golfers elect to lay up near these three bunkers and are left with a pitch of 100 yards with the only target being the yellow flag flapping in the breeze.

Sixteenth hole, 200 yards; A stirring hole, this all or nothing one shotter plays across a chasm to a green on the ocean’s edge. When questioned of its difficulty and told that a driver might still result in a score of 12 on some days, a board member famously responded, ‘It beats a 13.’ Forced carry shots in windy locations can lead to all kinds of scores and certainly the sixteenth at Tralee is no exception. Regardless of the outcome, this view looking back across the sixteenth green is guaranteed to lift the spirits.

Seventeenth hole, 355 yards; Similar in length to the seventeenth at Pine Valley but more exacting with the fairway narrower and the wind ever present. This non-formulaic hole captures both the uniqueness and challenge of Tralee. Premium is on accuracy off the tee on this modest length two shotter. When played from the fairway, the approach to the sharply elevated green seen high on the right is manageable.

Long after an initial visit, the golfer will reflect on many of the ten holes described above and hope for a return visit to conquer them. As for the other eight holes, the golfer continually finds that there is always something to do, be it a preferred type shot (e.g. a fade into the fifth green as it angles away) or avoiding spots where an up and down is unlikely (e.g. the right of the fourth). Golf instruction books talk about ‘thinking your way around a course’ and in the case of Tralee, there is no prettier spot to do so.

Though Ed Seay deserves full credit for this original course, he admits he took chances that he normally wouldn’t. This boldness of the design created turf care issues (as indeed Ed Seay had predicted) and Tralee took a lengthy period to reach a sense of maturity. However, the conditioning of the course has now caught up with this twenty plus year old design. The Club’s conviction and patience was admirable during this period and today’s result is a course unlike any other in the world. The uniqueness of its holes in an incomparable setting makes Tralee a must-see. Just remember – don’t take a scorecard and pencil!