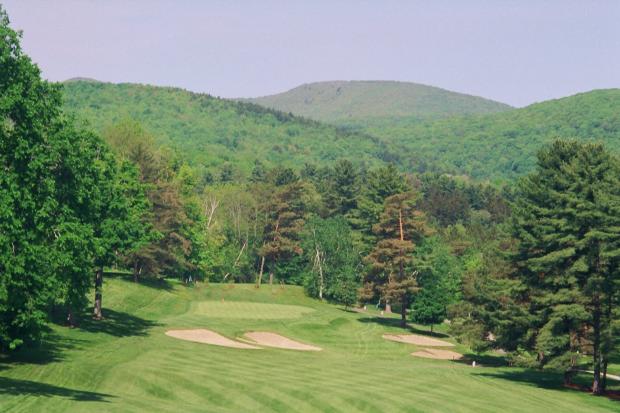 The environment matters in which the game is played and there are few more enjoyable than Taconic’s location tucked in the Berkshire mountain range.

Many a visitor innocently remarks after his first round at Taconic, ‘My goodness, where has this Ross gem been hiding?’ Located in Williamstown, Massachusetts, Taconic never fails to impress the first time visitor. The only surprise is learning that Donald Ross had nothing to do with it but rather full credit belongs to the little known New England design firm of Wayne Stiles & John Van Kleek.

Stiles, who was a low single figure amateur player, was a member at Brae Burn, a fine Ross course outside Boston. He played there countless times and by the start of WWI, he was more interested in golf course design than in his Boston-based landscape profession. In 1924, he formed a partnership with John Van Kleek, another landscape professional. According to noted Stiles historian Gary Sherman, Stiles &Van Kleek built more than 60 courses between 1924 and 1932, mostly in New England (though Van Kleek was based in St. Petersburg, Florida).

Like such Ross gems as Holston Hills and Mid Pines, Taconic enjoys a great naturalness with an absence of any heavy handedness by man. This is accomplished largely through their routing in which they found so many natural green sites within the 130 acre property. Many of the greens are located atop a knoll or hillock(e.g. 3, 4, 5, 10, 12 and 16). In other cases, Stiles & Van Kleek pushed dirt from the surrounds to create attractive green sites as extensions of fairways (e.g.8, 11 and 15). As with the best Golden Age designers, Stiles & Van Kleek provided plenty of room off the tee with the real challenge being ahead at the green. To find oneself above the hole is to invite anxious moments into the round. 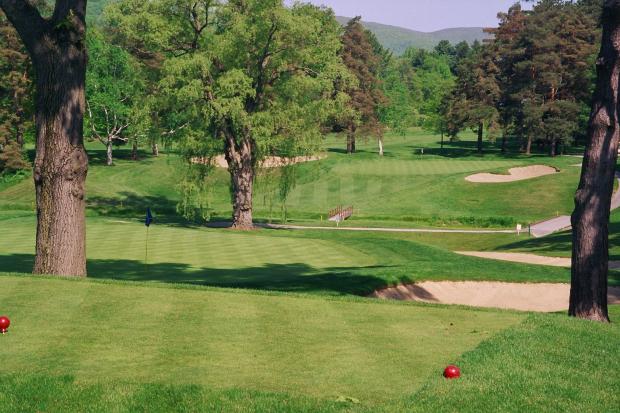 The intimate routing of Taconic means two and half hour rounds are a possibility. Pictured above is the red tee for the 6th hole, the 5th green and the 4th green in the far distance.

Third hole, 410 yards; A classic example of a hole narrowing and becoming more exact the closer one gets to the green, which has some of the finest interior contours on the course. Mindless length is rarely rewarded at Taconic. 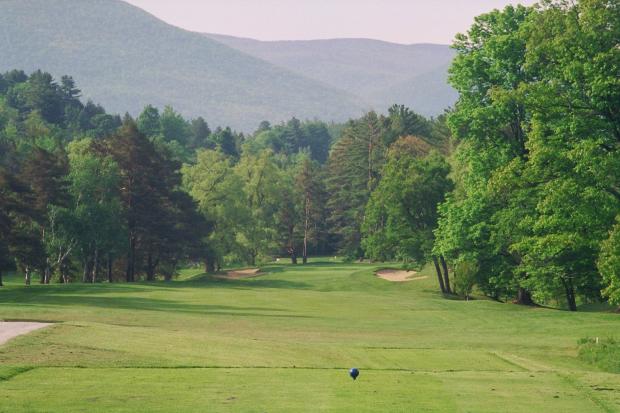 The third fairway narrows and falls away into a gulley at the 250 yard mark.

Fourth hole, 360 yards; More charming than strategic, there is no reason to flirt with the meandering creek down the left of the fairway as the green’s angle best accepts approach shots from the right portion of the fairway. 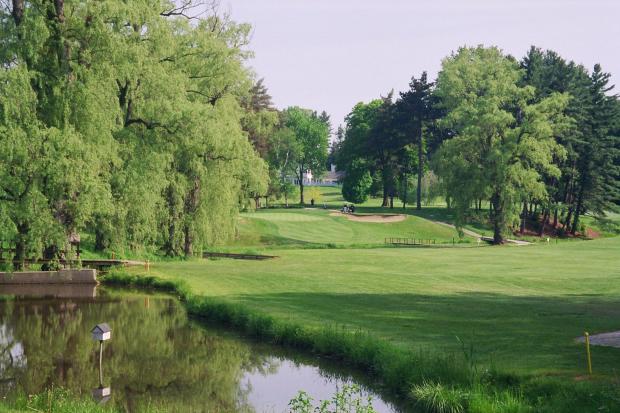 The length of the 4th green points down the right side of the fairway. 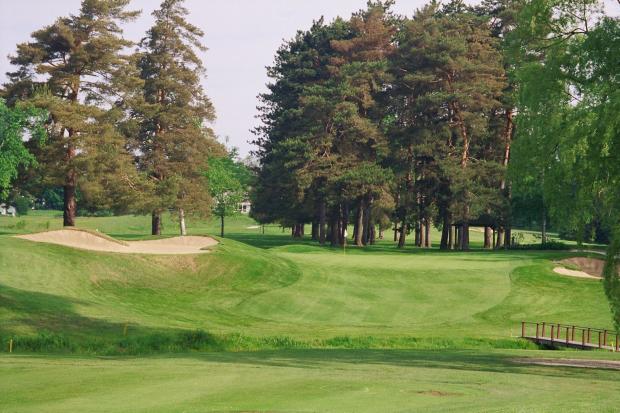 The attractive 4th green complex was placed upon a hillock and as with all such greens at Taconic, the player has to take care to keep his approach below the hole.

Fifth hole, 170 yards; Stiles often spent quite a bit of time on sites getting the finer details of the greens correct and this hole is a prime example of his taking the time to get it right: the bunkers and the green contours are beautifully tied together. 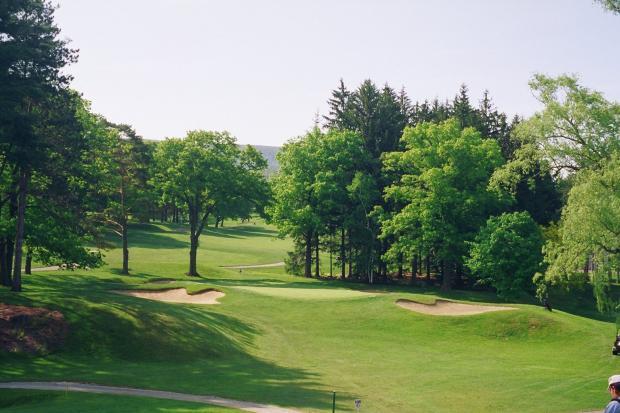 With the day’s left hole location, the player must aim right as to short side oneself leaves no chance for recovery.

Eighth hole, 395 yards; A sleeper, this dogleg right seems innocent enough but the approach is more downhill than one suspects. When coupled with a green that runs from front to back, getting one’s approach close to the hole is harder than appearances suggest. 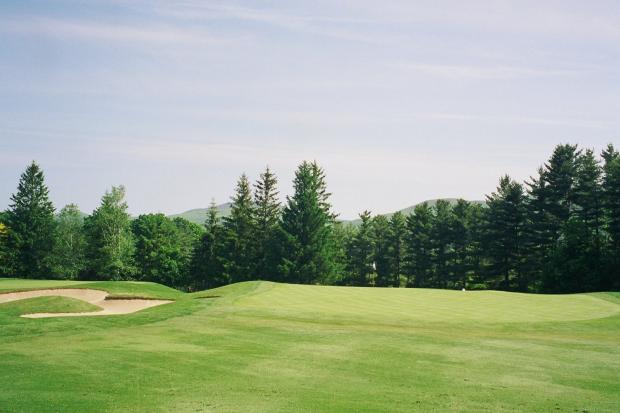 The 8th green is open across its front (note the horseshoe shaped bunker that is shared with the 11th green). 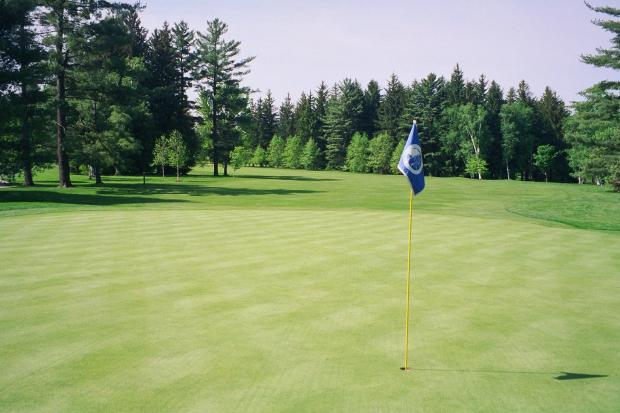 The view from behind the 8th green better shows the downhill nature of the approach and why a low running approach is often the play as the ball will chase onto the green.

Tenth hole, 505 yards; The most frustrating hole on the course, the tiger sees a reachable par five, especially as his tee ball will pick up extra roll in the downhill hitting area. The apparent ease off the tee is balanced with one of New England’s most severely pitched greens. With almost five feet in fall from back to front, the golfer must stay both on line and below the hole at all time. On the other hand, the average golfer can blunder his way down the fairway, wedge on beneath the hole and leave with a simple par. 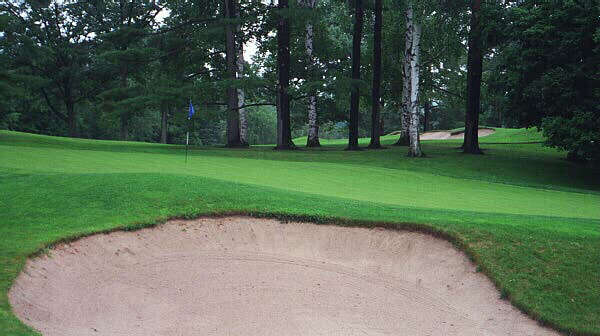 The severe back to front pitch of the 10th green is evident in this view from the 11th tee.

Eleventh hole, 470 yards; A grand old fashioned hole where most players won’t have a clear look at the green for their approach shot over the brow of a ridge. The low lying mounds around the green are beautifully integrated into the green itself. 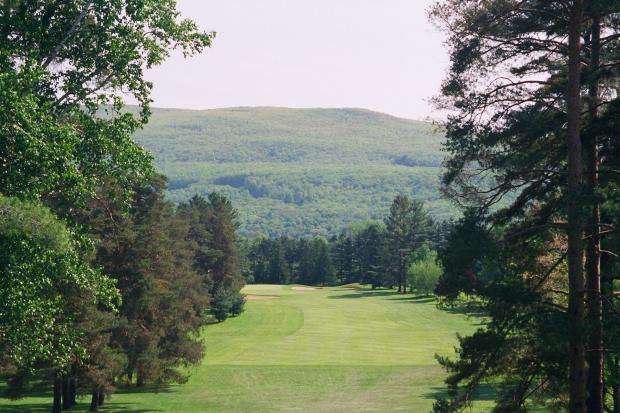 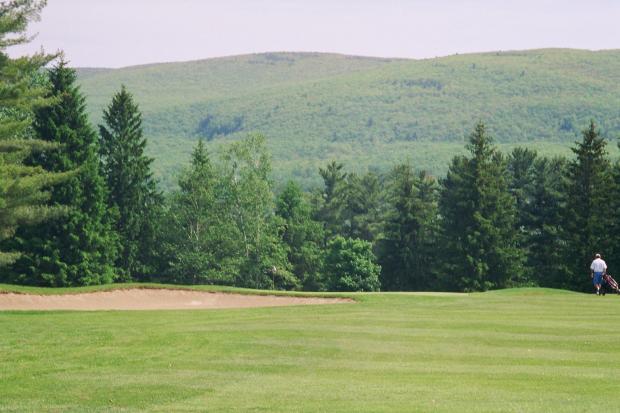 The 11th green is actually another sixty yards beyond this bunker.

Twelfth hole, 365 yards; The green and its bunkering encourage an approach from the left but alas, the ravine located down that side does not. The further right toward safety the player hits his drive, the correspondingly worse angle he gains into the green. 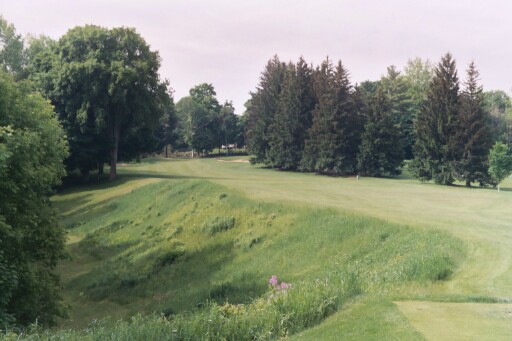 The bold play off the 12th tee is long left, flirting with both the ravine and out of bounds.

Thirteenth hole, 390 yards; From the tee, everything in the hitting area slopes sharply left to right with the natural consequence that the green is often approached from the right side of the fairway. If the green was circular, this wouldn’t matter but instead the architects built the deepest (40 yards) and narrowest (16 yards) green on the course and oriented it down the left of the fairway. To gain the best angle for one’s approach, the player can drive straight down the edge of the left fairway (with out of bounds twenty paces away) or draw his approach into the hillside to hold it in the left portion of the fairway. Holes that are laid across side slopes rarely look or play as well as this one. 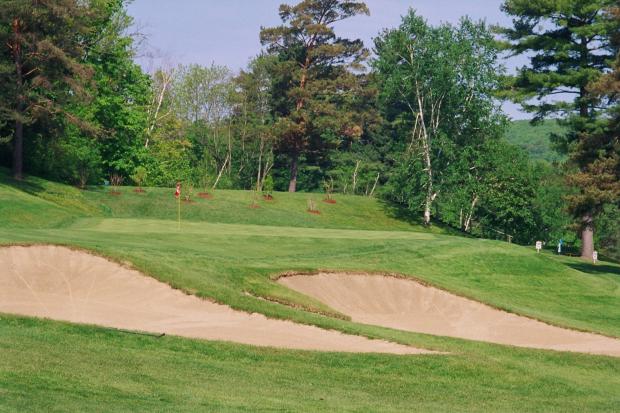 The golfer who can keep his tee ball down the left faces this ideal angle into the long 13th green, which Stiles & Van Kleek benched into the hillside.

Fourteenth hole, 175 yards; Another well defined hit or miss target, which Jack Nicklaus once did in a single stroke in the late 1950s. 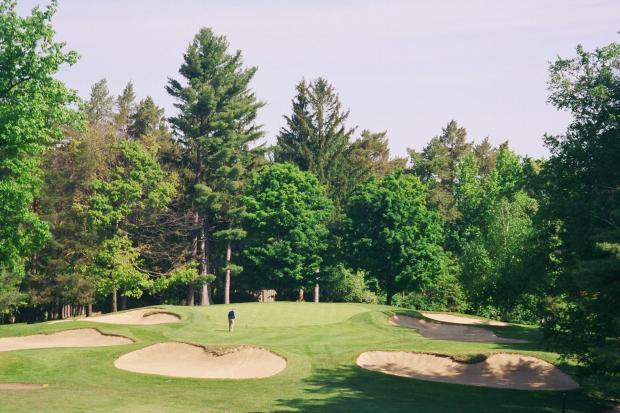 Routed along the hill’s shoulder, the ground falls away left, right and behind the 14th green.

Seventeenth hole, 220 yards; The penultimate hole completes a very impressive set of one shot holes. The green is wider (26 yards) than it is deep (21 yards) and is an elusive target. Given the domed green’s severe back to front pitch, the key shot is often the second one: a chip or pitch that gets above the hole may lead the player to take the same number of strokes here as on the three shot 18th hole. 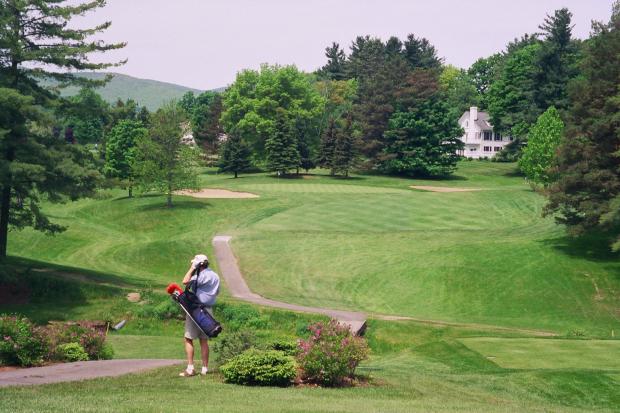 The 17th green is on the far side of the valley. The higher landforms on the right can be used to kick the ball toward the green.

Though Taconic is considered Stiles’s finest work for good reason, it does lack cross bunkers. Undoubtedly influenced by Herbert Leed’s masterpiece at the Myopia Hunt Club, Stiles did not hesitate to employ cross bunkers where possible, with the 18th at Thorny Lea GC being the best example. At Taconic, Stiles placed little directly between the golfer on the tee and the green in the distance. Rather, he let the rolling terrain create the need for accurate driving. Hence, the Latin phrase on the front of the scorecard which translates to ‘safer from the middle.’

At 6,640 yards from the back, Taconic relies on its cunning green complexes rather than on any requirement for brute strength. The USGA was impressed enough to ask Taconic GC to host the 1996 U.S. Senior Amateur (its third USGA event) and Taconic has also twice hosted the NCAA Championship.

Massachusetts was indeed a very crowded neighborhood in the roaring 1920s. But of this there is no doubt: if Wayne Stiles had practiced his keen hand at architecture in any other decade, he would be much more of a well known figure. His work demanded that kind of respect, with Taconic being the finest example. 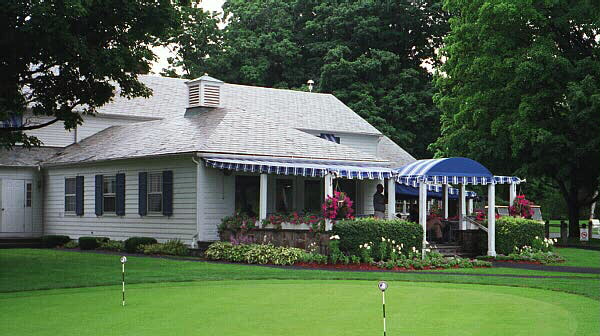 The charming New England clubhouse is a perfect match with the course.