‘Anyone who raves about the Old Course after just one or two rounds there is either a liar or a fool,’ says David Fay, Executive Director of the USGA. Fay relates that it was not until he served as a referee in the 1990 Open Championship there and spent four days walking the course and watching the game’s best tack their way round it that he began to appreciate the most famous course in golf.

More than any other course, St. Andrews warrants (and of course has received) study. While the land is basically flat, it is a continuous ribbon of crumpled linksland that hides much of itself from view. Many rounds are required until the player knows what is out there on every tee and, therefore, where to go and where not to go. It is only with this knowledge that the player appreciates the tremendous amount of strategy involved in playing the Old Course.

After a few holes, the overall strategy becomes apparent: Drive left (where there’s all the room in the world) and face an awkward approach or drive right (typically between gorse or out of bounds on the right and bunkers on the left) and have a simpler approach. At St. Andrews, hitting the fairways and greens does not count for a lot — one could hit every fairway and green in regulation and still not score better than 80. 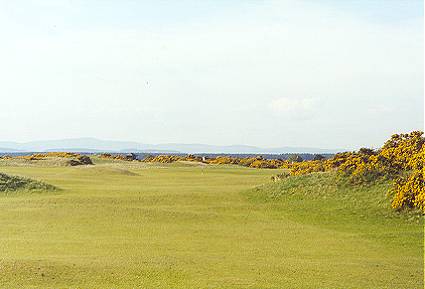 Which do you prefer? This straightforward approach with an uninterrupted look at the fourth green or… 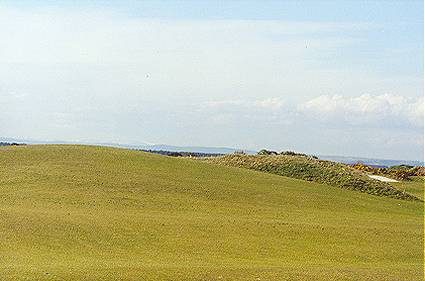 This angle from the left side of the fairway, where the tip of the flag is barely visible and the approach must carry a greenside bunker?

It is important to play many rounds to encounter the full variety of hole locations. With such large, undulating greens, the hole location can significantly effect the exactness of play that is required. With the 2nd hole, for example, if the hole is left the player can attack the hole only from the right side of the fairway as the big left-to-right undulations that guard the left side of the green will thwart any approach shots from the left side. With a back-right hole location, the entire hole becomes relatively benign and forgiving.

However, the main need for many rounds over the Old Course is to encounter it in every type of wind and weather. Then the player will appreciate that every bunker can be in play, given a certain wind. With a number of the traditional out-and-back links courses, there is a particular wind that best shows off the course. For example, at Royal Aberdeen the preferred wind would be behind the player going out and against him coming home so that the less interesting and less dramatic back nine has the wind to keep the player’s attention.

At St. Andrews, however, each wind brings out different, but not necessarily better, characteristics and challenges in each hole. With the 14th, for example, the hole plays extremely long into the wind and requires the player to think his way through all three shots to negotiate the hole’s many defenses. With the wind helping, however, many of the bunkers do not come into play, but the shallow, raised green is most difficult to find with an approach shot of any length as the ball will make a mad rush for over the green. No other course adapts itself so well to all winds.

MacKenzie noted in his book The Spirit of St. Andrews that ‘No one would pretend that the Old Course at St. Andrews is perfect.’ How true. However, the run home from the 11th tee possesses more of the ‘bests’ in the game than any stretch in golf.

First hole, 370 yards; The fairway is necessarily wide for the most intimidating opening drive in golf. More horrific attempts to move a golf ball forward have occurred on the first tee than any other patch of turf in the world. The Swilcan Burn makes the approach shot fascinating. Many, many golfers unaccustomed to the full effects of the wind (and playing without a caddy) watch with great intent as their well struck approach shot ends up 1. not only short of the hole, 2. but short of the green, and 3. short of the Burn by some ten yards.

Eleventh hole, 170 yards; The Eden is the finest medium length one shotter in golf. While the fearsome Strath and even deeper Hill bunker to the left focus the attention, the severe back-to-front slope of the green is the real terror. The authors think this style hole should have been copied more than the even more famous Redan.

Twelfth hole, 320 yards; The game’s best short two shotter. There are so many options off the tee. Again though the green is the key – its shallow rear shelf falling away on all sides remains as fresh a challenge today as it did to Allan Robertson 125 years ago. 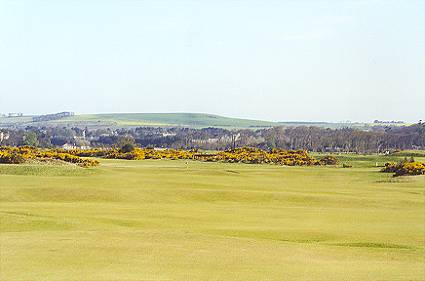 What bunkers? The view from the twelfth tee is highly deceiving as not one of the seven bunkers is visible.

Fourteenth hole, 560 yards; The game’s bestthree shotter due to all its options. While many comment on the different ways to play the hole, don’t overlook the best green on the course. Alister MacKenzie was right when he lamented that the fearsome Hell bunker is not visible for the second shot — it would be more effective if it stared the player in the face, daring him to knock his second shot over it. 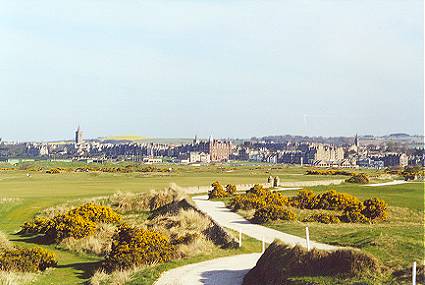 The terrifying tee shot from the championship fourteenth tee, with out of bounds down the right.

Sixteenth hole, 390 yards; The Principal’s Nose combined with the imaginative contouring in and around the green makes this one of the most admired medium length holes in golf. Why aren’t there more holes of this length being designed today with the same appeal?

Seventeenth hole, 460 yards; The world’s ultimate ‘half par’ hole comes at the telling moment in the match. The fact the green is the single most focused point in the world of golf does little to calm the golfer’s nerves.

Eighteenth hole, 350 yards; Terrific finisher and much more satisfying than just another long par four hole. Birdie is a real possibility, but the player is far from guaranteed a par, as Doug Sanders can attest, thanks to the terrific green contours that Old Tom Morris instilled in the Home Green when he built it in 1869. Thefinest finishing holes provide for this type of two stroke swing. Most players will leave the course in a good mood, eager to return. Also,making a three here with the onlookers ringing the green is a tremendous thrill, as it is likely to be the greatest number of people most golfers play in front of in their life. After the Dunhill Cup in 1994, the authors were playing in a brisk 45 mph ‘breeze.’ The 18th was down gale and steadying oneself proved difficult as a topped tee shot into the Swilcan Burn indicated. The second ball from the tee, however, found the green and an unlikely par was saved. 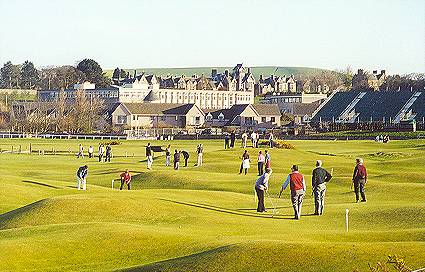 The Putting Green is another unique feature at St. Andrews.

One often overlooked aspect of the Old Course is that it can be a very, very hard golf course. In calm, soft conditions the course can be attacked with its double fairways and huge greens. In windy, firm conditions, the golfer can be ripped apart. However, unlike so many of the monstrously difficult courses built in the 1980s, the golfer remains keen for another opportunity to test himself on her.

The flexibility in course set-up is unmatched. It allows Ernie Els to be fully challenged one day, and a father and his family to have a highly enjoyable round the next. This fact ensures St. Andrews lasting appeal for generations of golfers to come and makes it the model against which all courses are judged. 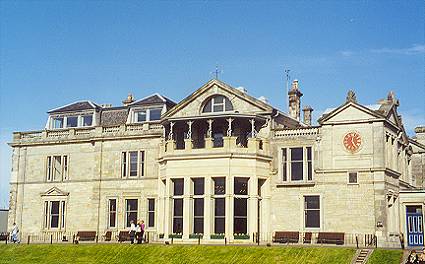 The unmistakable backdrop to the home hole.