Once upon a time, on a beautiful piece of property along the shore of Lake Michigan…

If this sounds like the beginning of a storybook tale from a bygone era, that’s because it is. To complete the tale, the year was 1918, the piece of property was in Lake Bluff, Illinois, along Chicago’s north shore. The founding members of Shoreacres hired Seth J. Raynor to construct a course worthy of its setting. 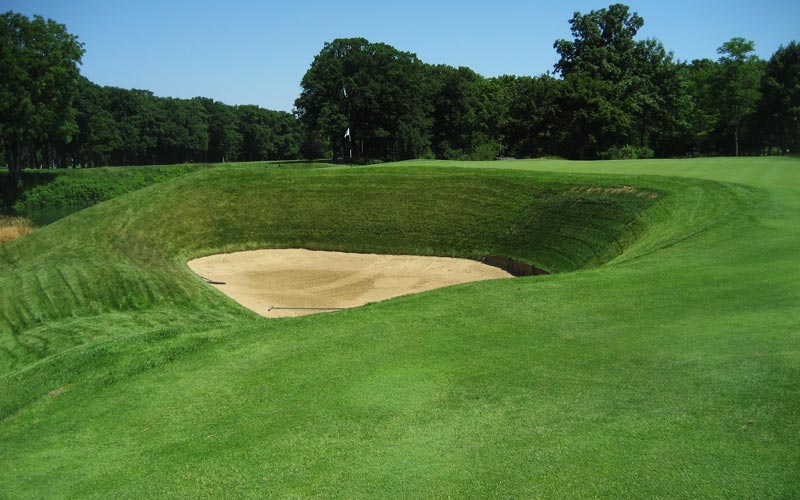 Raynor’s typically steep and deep bunkering is evident here at the seventeenth.

Making the turn at the discreteShoreacres – Members Only sign, one can feel a connection to the early 1920’s when Raynor laid out this course. The journey into the Club is a definite part of the overall experience as the drive passes the third fairway and thesecond green withthe creek wrapping around it.One languidly proceeds through an avenue of trees. To the north is the first fairway and to the south is the miniscule practice field. The road again bends to the left by the practice putting green and the eighteenth green and past the David Alder white clubhouse perched on the bluff. The professional’s shop is further around to the west, closer to the course.

By now,any of life’s worries have melted awayand the golferis just itching to play. Best yet, the course does not disappoint.

Shoreacres and Camargo, which also opened in 1921, were Raynor’s first great solo design efforts. Their immediate success assisted Raynor as being the preferred architect at such remarkable sites as Yale, Fisher’s Island, and Cypress Point in the second half of the 1920s.

Shoreacres is as original a Seth Raynor design as exists.Green KeeperTim Davis has been at Shoreacres for over twenty years and knows his course as well as any Green Keeper in the country.Working in collaboration with Tom Doak’s Renaissance Design Firm, they havethoughtfully restoredevery Raynor feature possibleto its original state.Over time, the greens have been returnedto their initial size, in some cases increasing the green size by more than one third. A direct consequence of such a restoration is that many of the most interesting hole locations are brought back into play along the outer parts of the greens.

Though Raynor in general produced broad greens, getting at hole locations in their far reaches is a study in shot making. For instance take the fifth green. A front left location is diabolical as anything in the middle of the green leaves a putt sloping fiercely downhill and off the green. The golfer may be better off to miss the green left with a draw and have a straightforward chip shot into the green slope. Conversely, a back right hole located a top one of the plateaus requires a running cut shot to scamper all the way back.

Everybody talks about the stretch from the tenth tofifteenth and many feel that it represents Raynor’s very finest work – high praise indeed. Most of Raynor’s favorite type holes are to be found on this course, as we see below.

Second hole, 345 yards; Because of the hole’s modest length, the golfer will rarely have more than ashort ironapproach. The green is an extension of the fairway and is open in front. The golfer feels that he should make something happen. And yet when they start moving the hole locations toward the back and left, apprehension creeps in as a creek loops across the back and down the left of the green. A golfer in control may attack the flag while the less sure will tentatively play toward the front and hope for a two putt par. Regardless, the hole is a good barometer of the nerves of one’sopponent and the state of his game. 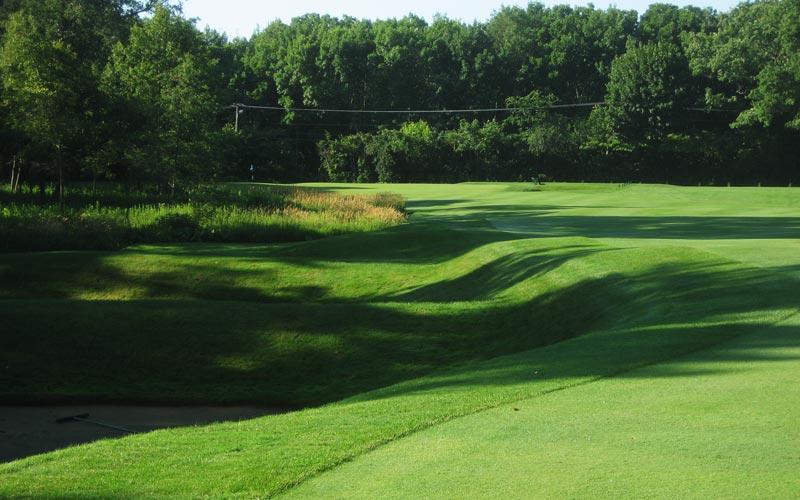 Down the left of the second is where all the trouble lurks. 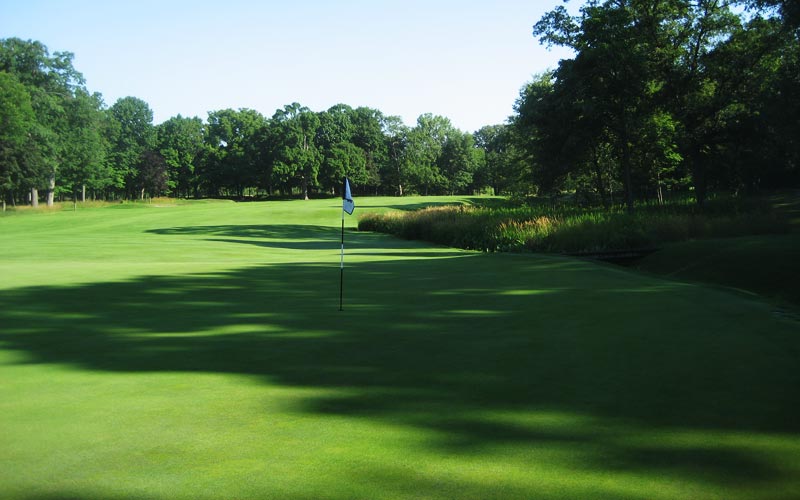 As seen from behind the green, left hole locations such as this one bring the creek well and truly into play.

Fourthhole, 370 yards; A Capetee ballwith a creek zigzagging across the tee line. The green itself is quite big and is bunkered left and right. The optimal angle into it is – you guessed it – from as near to the creek as possible. This green is another beneficiary of the reclaimed greens as some very interesting hole locations are found on the upper back left and right areas. 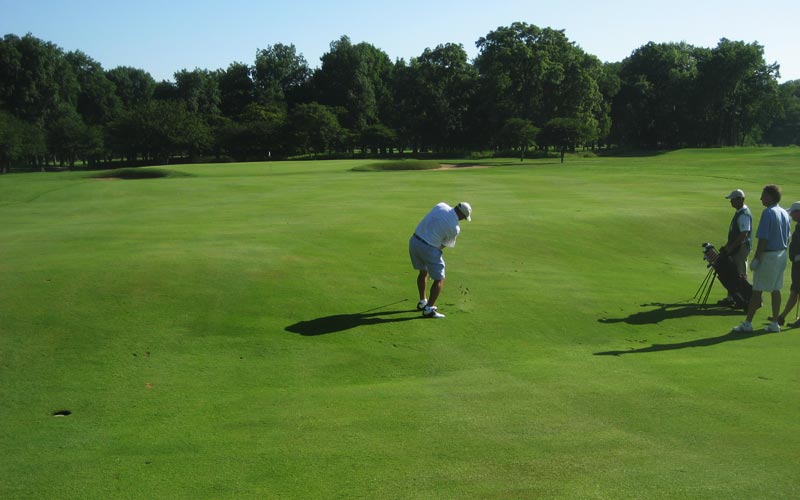 The approach from the swale after this long hitter carried the ditch on the Cape tee shot.

Sixth hole, 190 yards; A shorter than usual Biarritz hole that has both the front and back halves as green. The green itself is eighty-three yards long and features a two foot swale approximately in the middle. The Club has not always maintained the front half as putting surface. Interestingly enough, all the greens at Shoreacres have an original cinder base and when Tim Davis went to reclaim the front half, there was no cinder. Perhaps Raynor never intended the front half to be green but the hole is infinitely more interesting because it is. 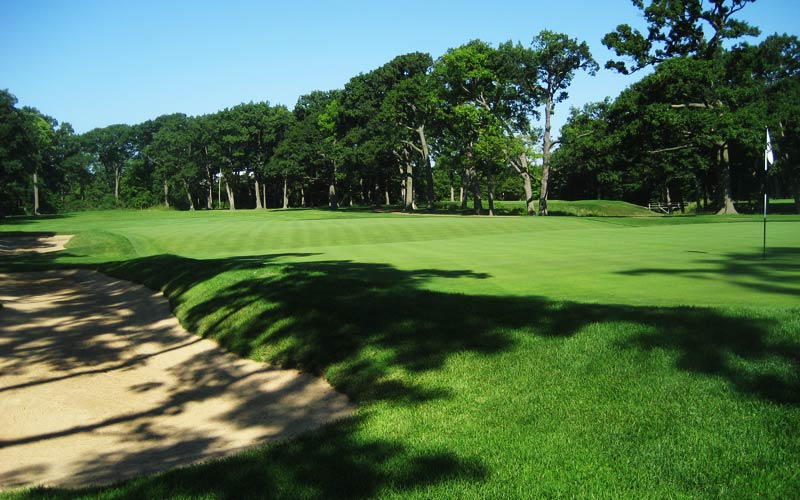 The full length Biarritz green, complete with swale, as seen from behind the sixth green.

Tenth hole, 455 yards; A terrifying version of the Road Hole that embodies many of the best characteristics of the original. Out of bounds is all down the right. The brave line off the tee is to flirt with a small ravine on the right in order to shorten the route home. A greenside bunker covers the left third of the green and a long bunker occupying the space of the road on the original version is ominous indeed. 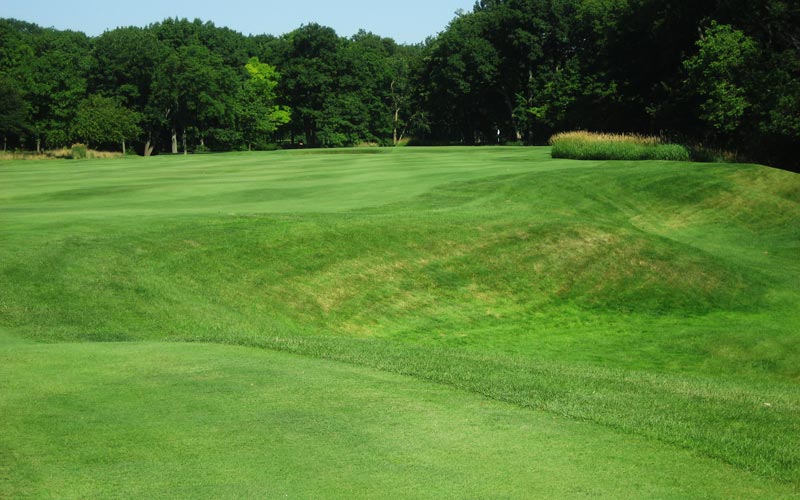 The landing area at ten is pinched on the right, both by this gully and the out of bounds which lines the hole. 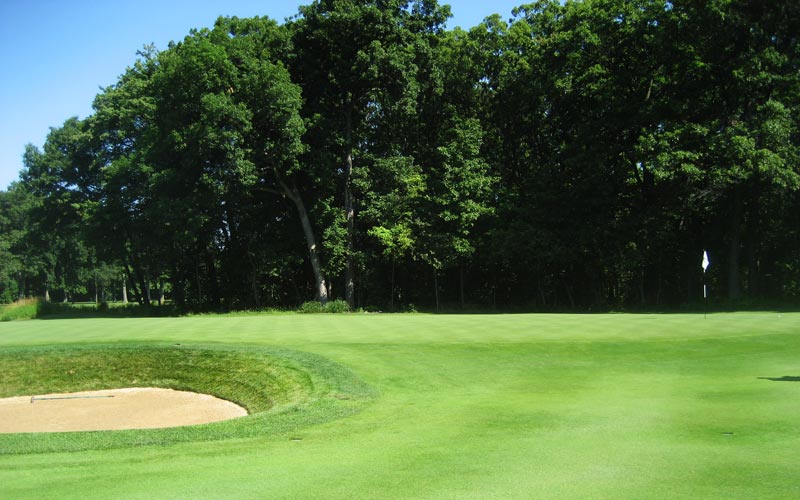 A true Road Hole green complex: the false front, Road Hole bunker, the shallow green and a deep bunker over all conspire to make this a very difficult target to hit on one’s invariably long approach.

Eleventh hole, 380 yards; Some students of golf course architecture consider Raynor to be one of the two or three greatest routers of golf holes in the history of the game. By that, they imply thatRaynor always found a way to get the most fromthe property that he was given. Obvious examples includehow heutilized the savannahas a backdrop for the front nineat Yeamans Hall while capturing the property’s rolling natureon theback. In addition, no one can imagine a better routing to this day for Fisher’s Islandthan Raynor’swhich hugs the shoreline to glorious effect. So too here at Shoreacres where Raynor capitalized on the property’s most dramatic feature:a twenty-five foot ravine. 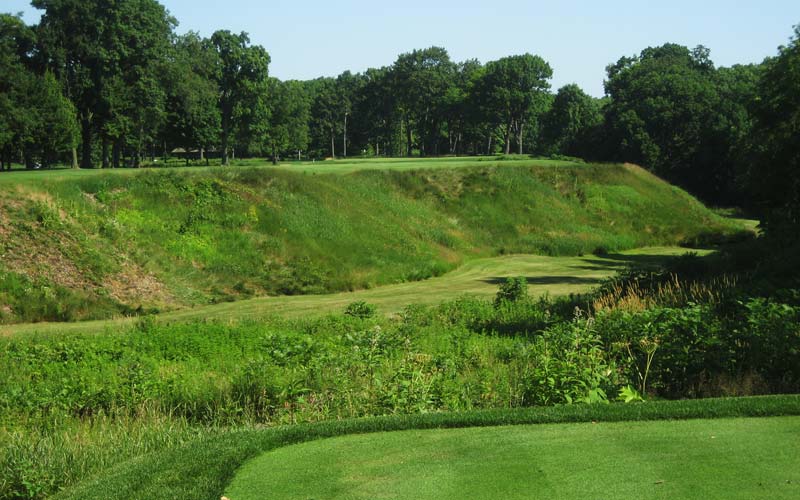 The intimidating tee shot on the eleventh is the golfer’s dramatic introduction to a ravine that dominates play over the next several holes. 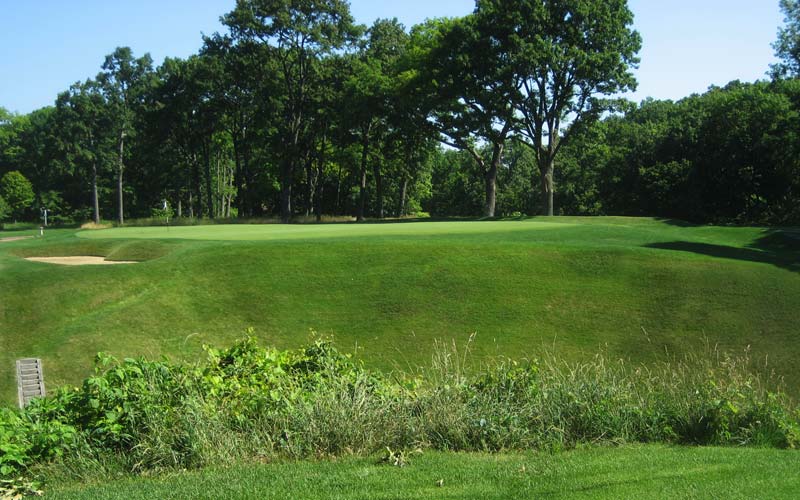 Raynor’s brilliant routing has the green placed on the far side of the ravine. Imagine playing this hole with hickory clubs, which is exactly what the membership did for Shoreacres’ first decade.

Twelfth hole, 130 yards; A much admired Short hole within the galaxy of Raynor Short holes, thisone plays downhill forty feet to a big green bunkered only in front. Up and downs for par aren’t likely. 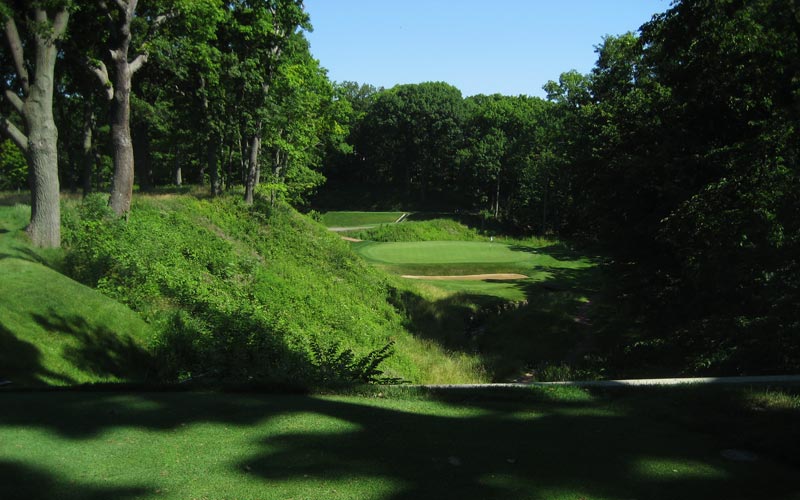 The downhill nature of this Short hole makes distance judgement quite tricky. Also, Lake Michigan is only several hundred yards away so the wind is always a factor.

Thirteenth hole, 330 yards; Despite the drivebeing blind and uphill, this hole remains full of charm because its modest length makes it all about finesse on one’s approach shot. The shortiron approachagaincrosses theravine and is appropriately to the most severely sloping green on the course. As with many Raynor greens, any approach that finishesabove the hole invites twitchy moments into one’s round. 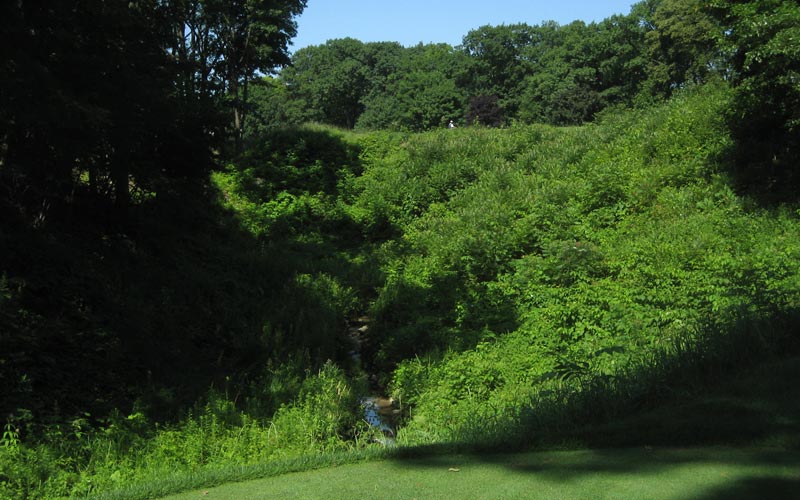 The ideal line off the tee is just left of the caddie in the photograph. 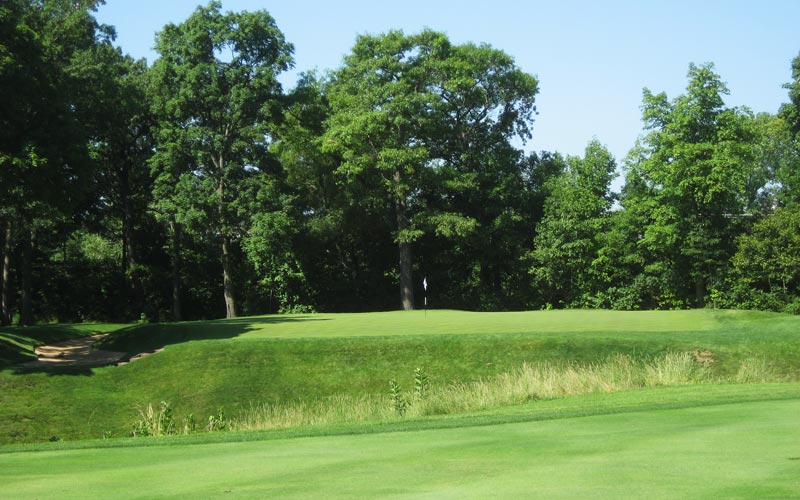 Again capitalizing on the property’s defining feature, the approach is played over the ravine to a severely sloping green, which does not yield many easy two-putts.

Fourteenth hole, 185 yards; A completely manufactured Redan hole, and none the worse for it. Raynor pushed up a tenfoot high ridge and the pitch on its shoulder is as steep as any of his Redans. On the left side are two deep bunkers which in this case may be saviors for the teeball tugged a little left: the same bloody ravine (!) is only a few paces from the edge of these bunkers. The green itself is the only safe haven as it is reasonably flat. 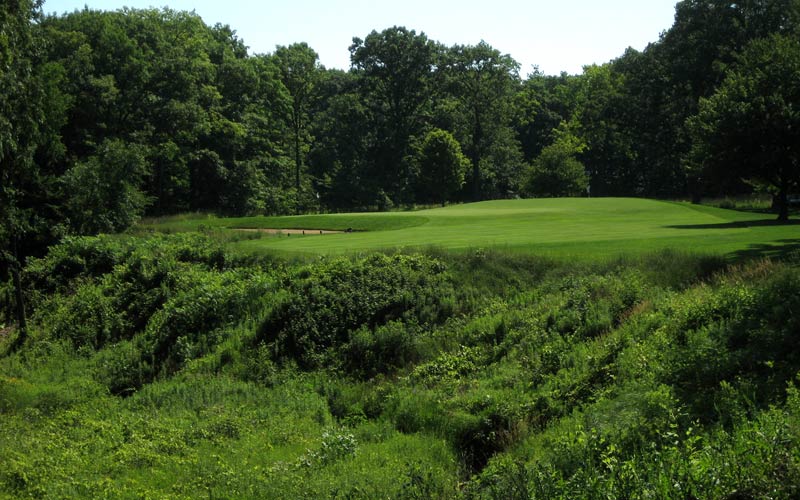 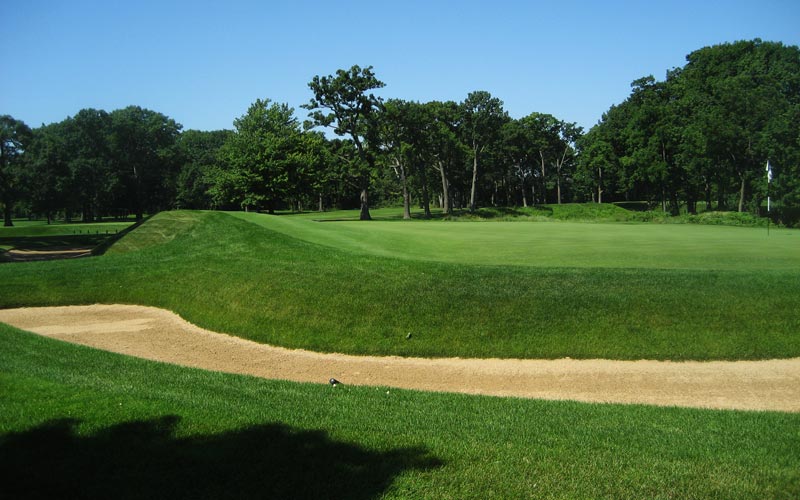 …which is better appreciated in this view from behind the built-up green pad.

Fifteenth hole, 520 yards; For many, this is their favorite hole on the course. Ironic for an architect that copied the best design principles from so many of the world’s great holes, it is not a copy of a famous hole but a thoroughly original one by Raynor. The tee shot is straightforward enough: a draw some 250 yards around the corner will bring the green within reach. However, as the golfer rounds the bend, a glorious multi-tiered fairway greets him. Just twenty yards pasts the ideal tee ball, a creek bisects the fairway. On the far side, near creek level, is one patch of fairway. Diagonal bunkers then divide the upper fairway into a short left side and the far right side. The golfer is presented with all kinds of delightful options (including going for the green in two) and they come at a telling time in the match. 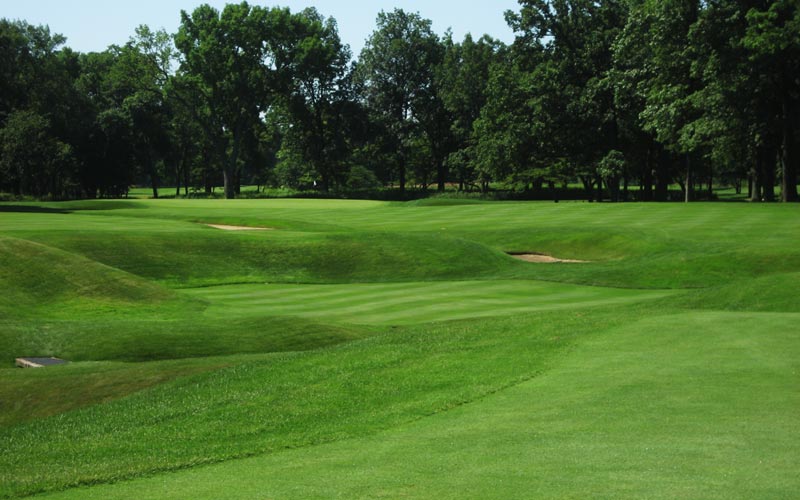 The magnificent fifteenth features all kinds of playing options/angles.

Along with Philadelphia, New York and Boston, Chicago hasbeen a center for golf in the United States for over a century. However, among the many 7,000 yard broad shouldered courses around this area, Shoreacres remains unique as it provides quite the challenge while still measuring under 6,600 yards. Indeed, the course measured under 6,300 yards until recently. New back tees by Davis in particular on holes XXXXXXXX have added two hundred yards in length in the past five years.

Regardless,it’s Raynor’swork thatdifferentiate Shoreacres from the other, biggercourses found in this historic golf state. His imaginative routing incorporates the property’s unique ravines and stream to great effect as seen above. Despite these dramatic natural features, most of the hitting areas are comparatively flat. The ultimate appeal of Shoreacres lies in its approach shots which are to greens so diverse and interesting that the golfer never realizes that he is playing a 6,520 yard course.

Some courses look loved and this oneabsolutely hasthat distinct feel.