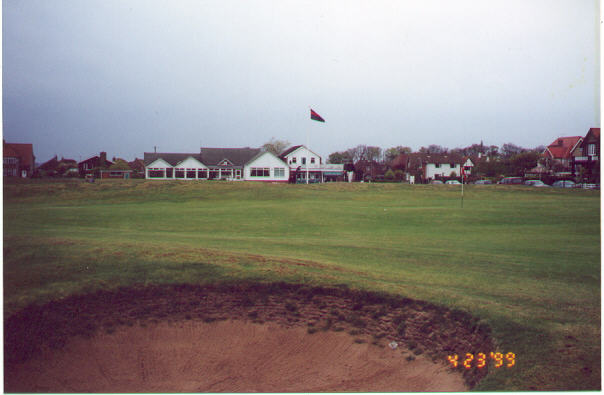 The clubhouse and rolling eighteenth green.

How much research do you do while planning a golf trip? Do you listen to friends who have made trips similar to what are proposing to undertake? Do you read up on the courses in an effort to decide which ones to play (and which ones not to play)? With the latter, do you put all your faith in one source, or do you try to find a consensus among different authors? The latter provides for a ‘safer’ trip as it is unlikely you will play a disappointing course. However, some of the fun is gone as well as you do not feel you are taking a chance â€œ a chance at finding a ‘hidden gem’ or suffering through an average layout.

When the authors were planning a trip to the central and eastern part of England, they consulted the usual sources: Tom Doak’s The Confidential Guide, Donald Steel’s Classic Links of England, Scotland, Wales, and Ireland and the popular (and often helpful) Following the Fairways, among others. When the day came for them to play Woodhall Spa (which they had previously played, thoroughly enjoyed, and wanted to revisit), they wondered whether they should play two rounds on that classic course or try to play the afternoon round at another course? Looking at the map for possibilities within an easy drive of Woodhall Spa, they considered the resort town of Skegness to the east and its course at Seacroft. Looking up the course about which they knew precious little, the authors found that Doak had made some complimentary remarks but had awarded it only a ‘4’ on a scale of 0-10. Following the Fairways offered more hope, describing it as ‘most underrated.’ Steel, however, quickly settled the matter, as he pronounced it ‘superb’ and went on to write ‘it is an absolute gem, and if my words send golfers scurrying across the Lincolnshire Fens to see for themselves, it is no more than it deserves.’ After this stirring endorsement by one of their favorite writers and architects, the authors quickly decided to forego an afternoon round at Woodhall Spa in favor of one at Seacroft.

One of the pleasures of going to play courses such as Seacroft about which you know little beforehand is that you do not know enough about it to form any opinions â€œ you are therefore playing it with an open mind, free to discover for yourself which holes you like (as well as which you don’t). On the other hand, a visitor to the Open courses will likely already be familiar with the course before his first round there, and what he has read about it and seen on television will serve to guide him into forming certain opinions. Such was not the case with the authors’ trip to Seacroft. 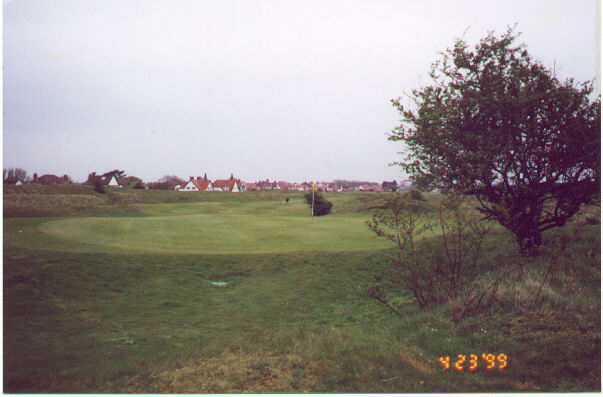 This view from behind the third shows the character of Seacroft.

Seacroft, located along the coast just south of Skegness, immediately gives the visiting golfer a different ‘look’ as there is no parking lot for the club. You just park right on the street and then proceed to the clubhouse, located on the street corner. At first glance the course conjures up images of Royal Lytham and St. Anne’s, with red-roofed houses framing the starting and finishing holes with good linksland in between. Like Lytham, Seacroft’s appeal lies not in its natural beauty, as more holes feature houses than the marsh. Unlike Lytham, though, there are splendid moments of isolation, such as at the distant 10th tee, with little evidence of civilization present. 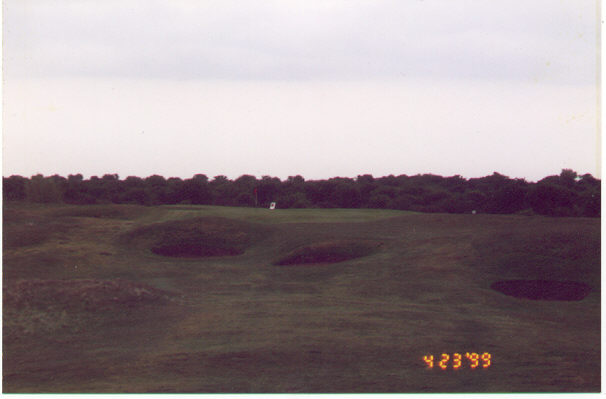 Getting away from it all: The tenth.

Often, courses that are described as ‘charming’ are labeled such as a synonym for ‘short.’ Seacroft is charming, and it is also on the short side, but its routing, greens, and design lead to this characterization much more so than its modest length. The course features some of the most sweeping greens of any links, especially those in England. The bold 2nd, for example, could well have been the work of Alister MacKenzie (although it isn’t). Such touches are evidence that Seacroft is a sophisticated links that owes much of its success to man (in this case Tom Dunn, who designed the original in 1892, and Willfrid Reid and Sir Guy Campbell who later made revisions) and not just nature. Further proof lies in the expert use of angles on the 8th and 13th holes where the player can gain a clear advantage by taking a more aggressive line. Yes, there were practiced architects on hand at Seacroft. 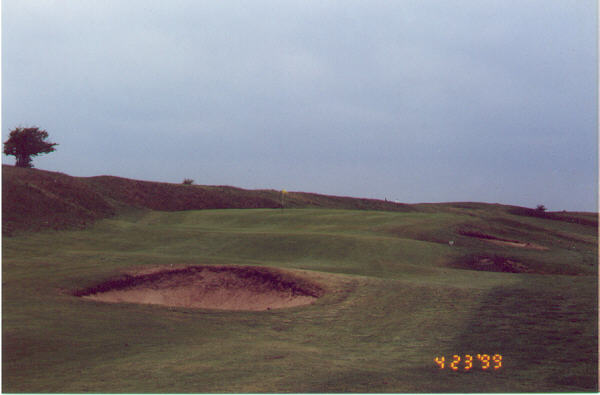 The routing makes the course, as if takes full advantage of the dunes the property has (e.g., the line of dunes that runs down the left of the 8th and then the right of the 9th fairway before crossing in front of the 9th green and serving as a site for the 10th tee) as well as an unusual feature of two very different levels: the plateau holding all or part of holes 13-16 and the lower but more rolling balance of the course. Given the property, a relatively narrow strip between residential property to the west (and some on the east) and the marsh to the east, it would have been easy to develop an unimaginative out and back affair. However, the architects worked to throw in as much variety in terms of the holes themselves and the direction as the site would allow. They succeeded by staggering holes in slightly different directions than their predecessors, as with the 3rd, 4th, and 5th holes. As the property narrows, the last four holes were all but forced to run in the same direction, but the architects injected character by varying uses of the upper plateau and the length of the holes. For example, instead of playing from the top of the plateau behind the 14th green, the player must descend into the flat to play an intimidating tee shot back onto the plateau. At 313 yards, the 16th provides a good change of pace as 15, 17, and 18 are of similar lengths (400-415 yards). 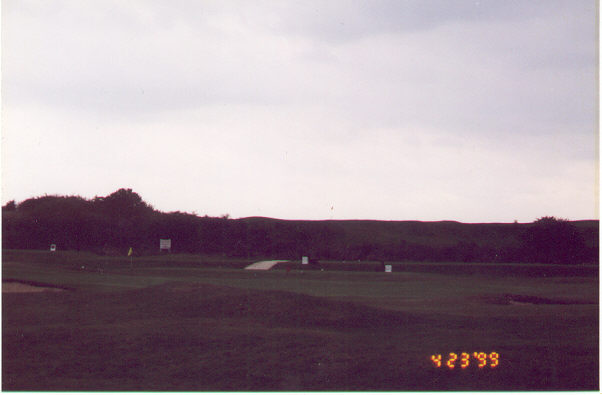 The two parts of the course: The sixth green in the foreground on the flat with the thirteenth green on top of the plateau.

Third hole, 330 yards; The most appealing hole on the course, the 3rd starts off with an old-fashioned blind drive to a tumbling fairway before a precise pitch to the elevated green. 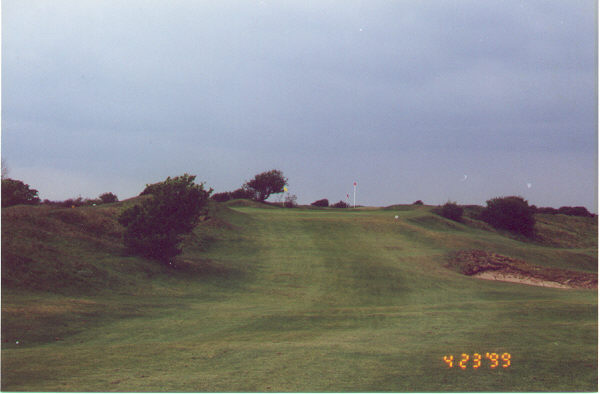 The pitch to the third.

Forth hole, 185 yards; Another example of how wonderfully simple one-shotters that play from one hill-top to another can be, the 4th is more sophisticated that might initially appear. The player cannot see what is right of the green, and he will find there a sharp drop-off as well as two deep bunkers. He is thus tempted to favor the left side of the green, where there is also plenty of fairway leading down the slope. It would take a terrible shot, he thinks, to find that bunker on the left at the bottom of the hill. However, in actuality he need miss the green by only one or two yards to the left to watch his ball slowly roll the 20 yards down the hill into that very bunker, leaving a most unfriendly recovery prospect. 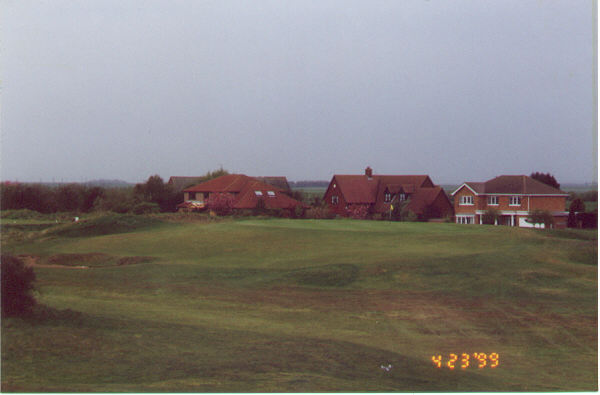 Believe it or not, that bunker on the left is very much in play on the fouth.

Seventh hole, 420 yards; A wonderful combination of traditional links golf and the start of the art of golf course architecture, the 7th features a green tucked behind a hill. However, unlike, say, the 17th at Prestwick, a drive down the left side will open up the green considerably. A drive down the right (even in the fairway) will leave a completely blind second to a green that is now set crosswise to the player.8th hole, 390 yards:

The 8th features the nerviest shot on the course with its drive that actually crosses the corner of the country road down the right side. As with the 7th, the 8th provides a fine example of strategic golf: the closer one drives to the road (out of bounds), the easier his second will be; the farther from the road he drives, the more difficult his second will be, because of the sidehill lie in rough. 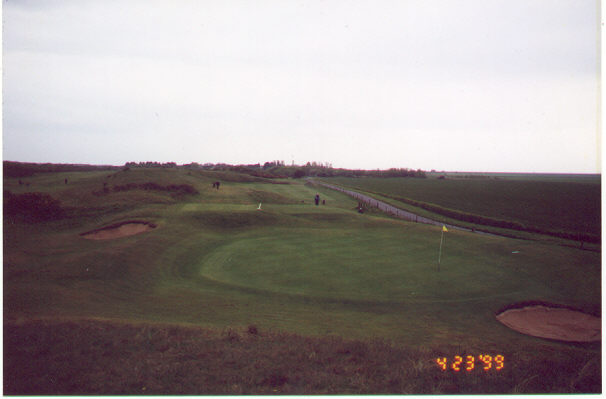 Looking across the seventh green up the eighth fairway. Note: The eighthtee is a good 30 yards to the right.

Thirteenth hole, 500 yards; The most famous hole at Seacroft, the 13th is somewhat of a rarity in links golf: a sharp dog-leg (this one to the right). The player attempting to reach the green with his second must fire his ball out over what looks like No Man’s Land up a bunker-infested slope toward the green with the marsh below on the right just a few of yards from the green. The green is the spot on the course affording the player the best view of the North Sea, but it is only a glimpse across a mile of the marsh. 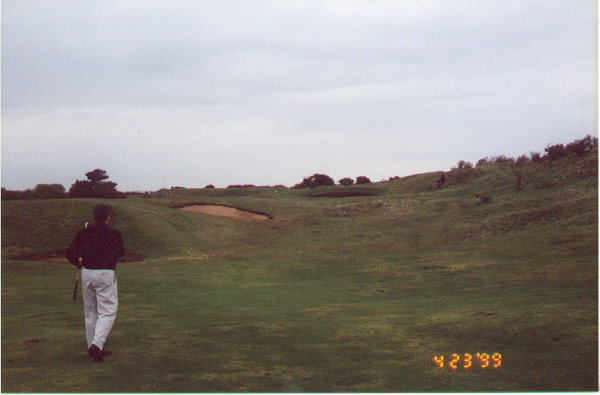 The second to the thirteenth: Where is he going?? The green is on line with the right edge of the right bunker.

Fourteenth hole, 175 yards; The most (perhaps only!) photographed hole at Seacroft, the 14th plays along the ridge, with a sea of gorse masking the drop-off to the left. 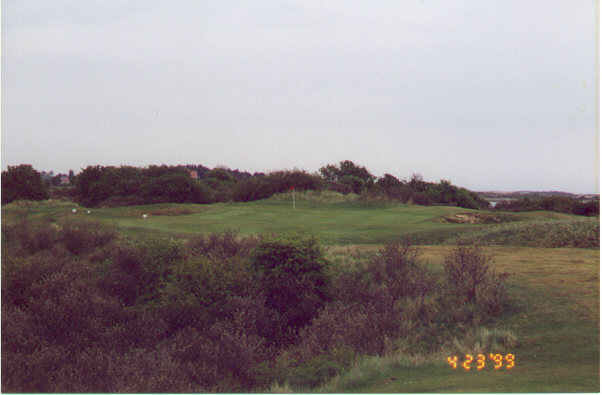 Given the quality of the course, then, why does Seacroft not enjoy a stronger reputation? The few people the authors know who have played there highly commend it. The day after their round at Seacroft, the authors were at Royal Worlington and Newmaket, no more than a two hours’ drive from Skegness. When told that they had played Seacroft the previous afternoon, a RW&N member who had not played there asked how they enjoyed the course, adding quickly ‘I understand it is quite good.’ Skegness is much easier to reach than, say, Machrihanish or Dornoch, as evidenced by its status as a summer holiday town. Without the obstacles of geography or access, there is no good reason for it not to enjoy an international reputation. Until Seacroft surfaces in more articles and lists, the authors will continue to scratch their heads over its relative anonymity.