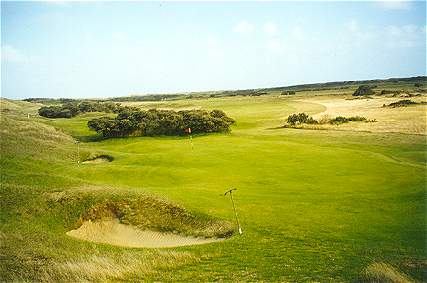 The fourteenth green – one of Rye’s famed one shot holes.

Rye reminds the authors of a seaside version of Swinley Forest. Neither course possesses a true three shotter; both have five one shot holes, which as a set take some beating; both have amazingly appealing long two shotters; both are strict examinations against par; both Clubs promote an uncrowded atmosphere from which their member’s may enjoy a game.

The one area where these two English clubs differ is in hosting a competition. Swinley Forest has no interest in such a thing where as Rye Golf Club on the south east coast of England is the home to the finest kind of an amateur tournament â€œ The President’s Putter, contested every January since 1920 except for the War years.

A who’s-who has played in Putter over the years â€œ Roger Wethered, Bernard Darwin, G.H. Micklem, Donald Steele, L.G. Crawley, Sandy Tatum, A. Croome, Patric Dickinson, the list goes on and on. As Dickinson once remarked, it may be ‘perhaps the last remaining competition which is played by the vast majority of the entrants for the fun of the game.’

The January date of the President’s Putter indicates one sure thing about Rye â€œ it is a winter course. Indeed, it is a better winter course than a summer one as the two authors can personally attest.

One author played the course in August. The fairways were bone dry with little grass and a ‘fresh’ breeze (ie 40mph) meant the ball would roll and roll until it either went into a bunker, or scrub, or bush, or simply disappeared. Breaking 100 was almost beyond reach on this par 68 course.

The other author played it in December on a typically empty day and could not have had a more enjoyable time. The ever present breeze was still about but the fairways had just the right amount of run – shots got what they deserved. In the end, he left the course having hit every shot, some downwind, some into the wind, most across wind and generally from every sloping lie imaginable. In short, the best characteristics of a true links course were on display that cold winter’s day.

Forth hole, 410 yards; It is impossible to make a hole harder than to route it along the top of a sand dune with evil falling on any shot less than straight. A tee ball missed right or left falls off the dune into God only knows. The green itself remains on top of the same dune line and any approach missed right falls away as well. The green is pitched sharply toward the golfer, so putting is no solace. 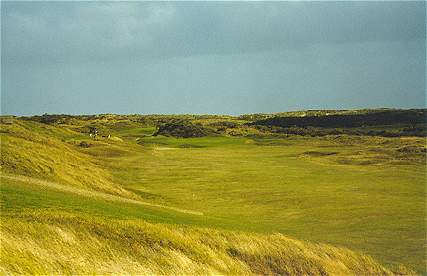 Looking down the sixth fairway, after having cleared the dune on the left with your tee ball.

Sixth hole, 470 yards; An unconventional hole in that the tee shot plays at a 45 degree angle over the central ridge with a guide post as a directional marker. Once in the fairway, the golfer may draw a level stance but the green is still a long way away. Four bunkers come out fifty yards from the front of the green and help determine just how well you did place the tee shot.

Seventh hole, 160 yards; The finest of Rye’s world renowned one shot holes. Nothing else need be said, other than like all of them, the golfer is best to be past the hole. Short is death. 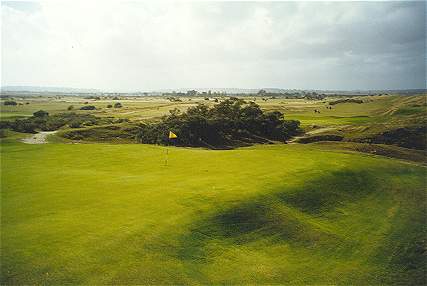 The seventh green is always an elusive target.

Thirteenth hole, 435 yards; The Sea Hole rivals the 3rd hole at National Golf Links of America and the original one at Prestwick as the finest Alps hole with which the authors are familiar. Fittingly enough, there are no bunkers around this hidden green. 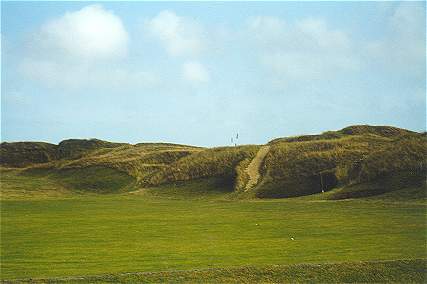 Up and over we go – the blind approach to the thirteenth green is often with a long iron or wood.

Fifteenth and Sixteenth holes, 430 and 420 yards, respectively; Quintessential holes at Rye: long par fours over rippling ground that dish up all kinds of awkward stances from which you are supposed to hit your 1 iron. As with most of the greens on the long par fours at Rye, they aren’t particularly big and are less than 30 paces deep. Good luck.

Eighteenth hole, 440 yards; Donald Steele, a long time contestant of the President’s Putter, rates it among the ten best finishing holes in the world and a ‘suitable climax to a round worthy of the traditionalist and the conoissuer.’ Any questions?

Foursomes and twosomes are the go here. Either way, a round generally takes 2 1/2 hours or less. After the 36th hole, the bar isn’t far as the white Clubhouse overlooks the 18th green. From the elevated Clubhouse bar, views are afforded to the English Channel.

Just as a who’s who of amateurs have played the course, a British who’s who of architects have had a hand in Rye’s development. Originally, H.S. Colt laid out the routing in 1894 (one of his very first) but little remains of his work. Tom Simpson and Sir Guy Campbell later helped the course evolve into its present state. The result is surprisingly cohesive.

As with any course that Patric Dickinson profiled in A Round of Golf Courses, let him have the last word: ‘ I will not say there are not greater links than Rye, but I will say and stick to it â€œ that there are few which combine and gather into one place so many of those qualities which make the game of golf unique.’