What is the most natural course in the world? Some people cite St. Andrews as the course which has evolved over several centuries and owes less to the hand of an architect than any other course. The old story is that the sheep huddling against the wind formed the bunkers at St. Andrews. Did the sheep also lay the sod in the bunker walls as well?

Bunkers by and large are contrivances by the hand of man. It follows that a course where minimal land was moved and that has no bunkers might well be the most natural course. There does exist such a full-length course; Royal Ashdown Forest, located one hour south of London.

The original charter of the Royal Forest prohibits any man-made alterations or excavations to the land. Thus, as a bunker is an excavation, there is not a single one on the entire course. Remarkably, the golfer may well play several rounds here before he becomes aware of this fact. Other than the wooden planks propping up a stream bank in front of the second green, the entire course is natural. By definition, Royal Ashdown Forest is a shining example of an architect working with the land.

Would new courses built today be better if similar restrictions were in place? It is an interesting thought as it certainly forces architects to maximise the land’s natural features. The rate some architects pump out courses would be dramatically reduced as they were forced to spend more time on site trying to understand the subtle nuances of the land. More unique courses like Royal Ashdown might well be created. 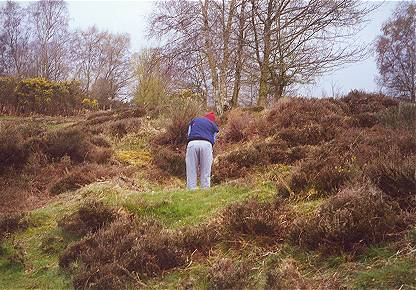 Who needs bunkers? This approach was only six yards short of the eighth green.

As for the course itself, given that bunkers serve many purposes, most importantly strategic, where then does the challenge and strategy come? It comes from the sloping land, the heather, the gorse, a stream, and trees to a much lesser degree. The property is hilly. A variety of uphill, downhill, and side hill lies will be encountered. The tee shots on several holes are intimidating as they must clear bracken infested terrain to reach the fairway. Nonetheless, to compensate the golfer, these same hills provide stunning views around the upper part of the course out across the Sussex countryside.

Many low markers in this age of the friendly sand wedge actually prefer being in a bunker as to other lies that may be encountered around a green. Also, better players often use bunkers to better gauge the depth perception for approach shots. For these reasons, many low markers actually find the bunkerless Royal Ashdown Forest as a tougher course to score on than their home club. Modern architects and their prolific eye candy bunkers might learn a thing or two after a day in the Royal Forest.

There are some holes that are hard to love such as the dull uphill fourth. However, there are many compelling holes to make up for the occasional weak one, as described below. 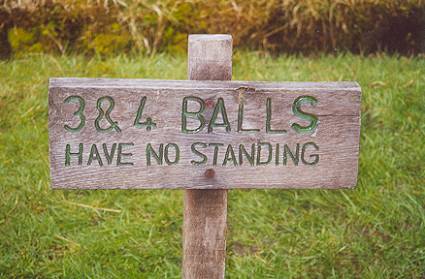 This sign on the first tee lets you know this is English golf at its best.

Fifth hole, 500 yards; The green on this down hill three shotter is placed ten paces behind a stream. The result is a beautiful gambling five par. The golfer going for the green in two must execute the shot from a downhill stance while still achieving enough height to stay on the green – not the easiest of shots but a gratifying one to pull off. 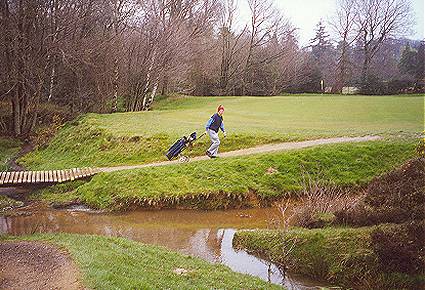 Don’t be short on the fifth!

Sixth hole, 130 yards; The most famous hole on the course. Known as “The Island,” the 40 yard long green is surrounded front and left by a stream and a gully on the right and back. Still it is a large target for a hole of this length and the ridge cutting across the middle of the green accounts for many a three putt bogey. 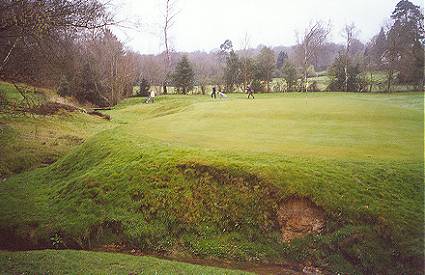 The ridge across the sixth green adds to the difficulties.

Seventh hole, 375 yards; A dogleg right built around an angled patch of broken ground with gorse and a ditch at the inside of the dogleg. The green sets in its own natural amphitheater and is swift from back to front. As the rain water tends to collect on this particular green, there is thought to moving the green onto the ridge behind its current location. This would provide the front nine with its only two shot hole greater than 400 yards and would be an ideal solution to the present problem of sustaining good grass on this green. However, the covenants make such a task difficult and only patience will see such a move.

Twelfth hole, 565 yards; Tom Doak selects this three shotter as one of the best in the world for good reason. The golfer must hold both his tee shot and his second shot against the right to left fairway slope. Both shots must clear heather, and if the tee ball doesn’t find a good lie, crossing the heather with your second will be a challenge. The sloping green is beautifully situated around ridges that throw the sloppy shot off and create a variety of recovery shots. 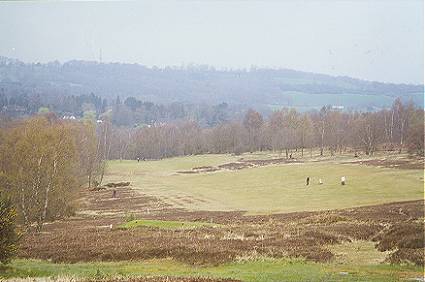 The long three shot twelfth as seen from the tee.

Seventh hole, 470 yards; This massive 4 1/2 par is the only inland hole in England to rival the 10th at Sunningdale (Old) in scope. The fairway runs gradually downhill until it tapers out some 160 yards short of the green. The golfer again is asked to flight a long ball to a distant green from a sloping lie. The green is none too big (it is only 30 yards deep) as the hole was once a five par. Similar to the finish at St. Andrews, the authors view having a tough 17th hole followed by an easier 18th hole to be preferable to the reverse (but more common) order.

One final point deserves to be made, as there really aren’t such things as Ëœwinter’ courses in most parts of the world. Not unlike other English courses such as Swinley Forest and especially Rye, winter is a superb time to play here. The golfer may well find himself alone on the moor, the smell of a peat fire burning in a distant mansion. The odd horse and his rider may also be out to enjoy the magic scenery. Just ask the most famous resident in this Royal Forest – Winnie the Pooh. 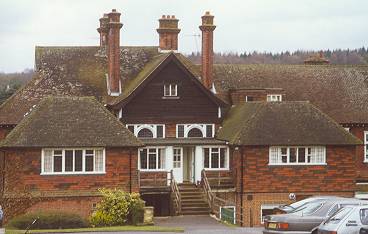 The Victorian clubhouse is a cosy haven in the winter.