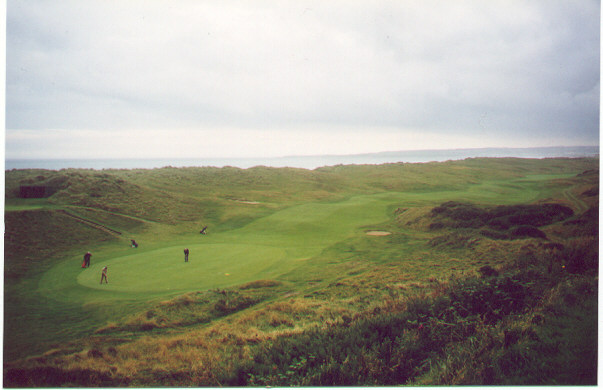 Looking back down the twisting second fairway.

Royal Aberdeen, located on the north-east coast of Scotland, is widely known for possessing one of the finest first nines in golf. This is unarguable, but what seems debatable is the merit of second nine.

Royal Aberdeen is an out and back affair. The first hole heads straight to the North Sea, with the next eight holes parallel to the line of sand dunes that separate the course from the sea on the golfer’s right. Each of the holes is laid out within three hundred yards of the North Sea. The ground is links ground at its best: lumpy and unpredictable. Small wonder it has so many admirers. 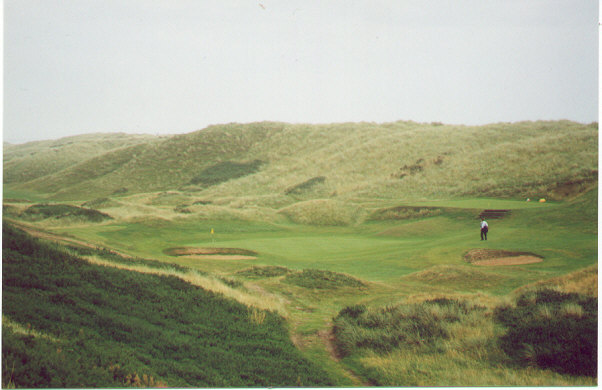 The third green set between the sand dunes.

The next eight holes track back to the clubhouse on higher ground. Being farther from the sea, they are more predictable. However, the higher ground does afford views down across the first nine and out to sea.

Nonetheless, the second nine features a couple nicely plateaued greens at the 11th and 12th, a stone wall on the 14th, and an original amoeba shaped bunker stretched across the front of the shallow green on the neat little 15th. And finally the golfer heads into Balgownie’s inspired finish. To boot, the second nine is generally played into the wind, a wise ploy on the part of the architect – to route the holes over the less interesting land into the wind. 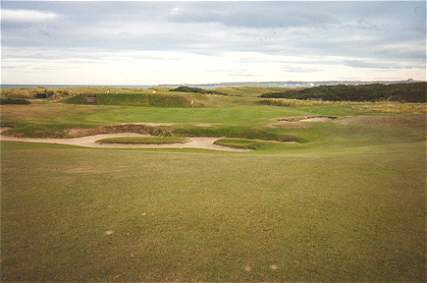 One striking feature that nobody ever seems to mention is that Royal Aberdeen features an unusually strong collection of par three holes, as we see below.

First hole, 410 yards; The perfect start for a golf course. The tee is directly in front of the Clubhouse window. The fairway rolls gradually downhill with the sea as the backdrop. The green with its false front is situated within 50 yards of the North Sea. What more do you want? 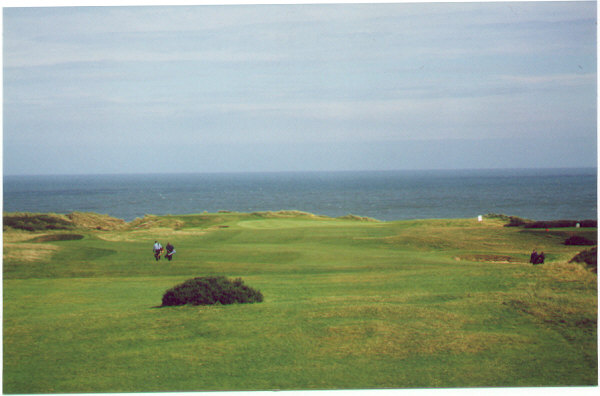 First hole – down to the sea we go!

Second hole, 530 yards; Links course are supposed to be set through sand dunes across tumbling fairways with the sea within ear shot. This hole has all of that plus that extra something called exhilaration. The contours in this fairway are big and bold and completely natural. They can throw the ball in any direction and create all kinds of awkward stances for the golfer. In short, the best links virtues are encapsulated in this wild, wonderful hole.

Third hole, 225 yards; The golfer climbs up the sand dune to this elevated tee that is the closest he will get to the sea. Below him in the far distance is the green. Due to the length the shot travels, the golfer has plenty of time to soak up the smell of the sea, the wind at his back, the sound of the sea gulls. The hole is imminently playable given its drop in elevation and the prevailing wind from behind.

Sixth hole, 470 yards; This hole features a rarity in Scottish golf – a cross bunker that forces the longer player to use a fairway wood off the tee, ensuring that he will always have a healthy approach. The same bunker dominates the hole should the player miss the fairway – can he carry it from the heavy rough with his second? 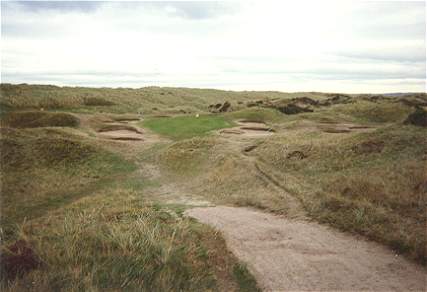 Eighth hole, 145 yards; Ten (!) bunkers surround this none too big green. Interestingly, this shot is the first one the golfer will play back into the prevailing wind. It is also a shot that requires uncommon accuracy. 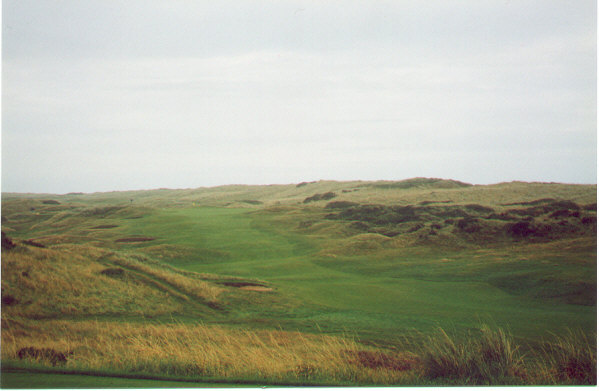 Looking up to the ninth green, from the outside of the dogleg.

Ninth hole, 455 yards; Tom Watson’s favourite hole on the course and appropriately named ‘The End’. A classic dogleg to the right with all kinds of trouble discouraging the golfer from being too aggressive with his tee shot. The green is further around the bend and tucked up into the sand dunes. (The green below is the 3rd at Murcar Golf Club, a links with a similar routing to Aberdeen’s but whose second nine is indeed a bit of a letdown). 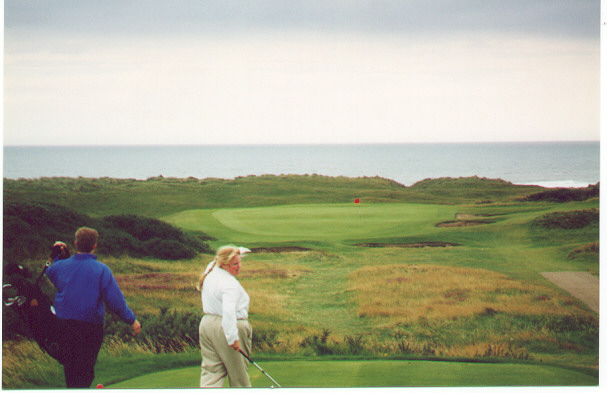 Seventeenth hole, 180 yards; The start of a strong finish, this par three calls for a precise long iron to a green with bunkers on the right and a sharp fall off to the left and over. The sea acts as the backdrop.

Eighteenth hole, 435 yards; A huge and brutal finishing hole, regardless of the wind. If the drive doesn’t fly 245 yards, it will hit a hill and go nowhere, if not backwards. The golfer will be left with a long iron or wood into the distant green, set near the clubhouse.

Along with its magnificent setting comes history. Balgownie is the sixth oldest golf club in the world, dating back to 1780. It remains a traditional affair, with a coat and tie required in most parts of the Clubhouse. Coupled with the sea-side setting, the combination is irresistible.

Too many travelling golfers head south from Carnoustie or otherwise go inland and up to Dornoch. Absolutely no one should miss this course, as it is the genuine article.