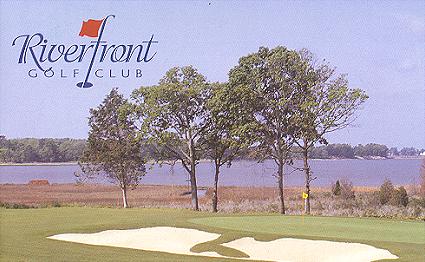 An architect’s job is to do the best he (or anyone else) can with a given piece of land. Rarely does an architect have a choice in selecting the land for the course – he is typically hired to build a course on a predetermined site. He might further be handcuffed by being asked to have the 9th and 18th holes return to the clubhouse, to build holes around/through housing, to build a course that can handle a large volume of play or by environmental restrictions. As one is searching for his ball in a homeowner’s back yard, one can sense the architect’s frustration at having such restrictions placed on him. How he would love to be given the assignment to build a course for a small, private club out away from civilization.

The Riverfront Golf Club near Suffolk, Virginia represents the extremes of such a situation. The site itself is first rate, with the tidal marsh or a lake bordering the majority of the holes. Tom Doak thus had the opportunity to use the water as a direct hazard that must be carried, as a diagonal challenge inviting the player to ‘bite off as much as he can’ and as a scenic backdrop. The course also has some rolling terrain in spots, precious in this part of the state where everything is flat. An architect like Doak who refuses to move much earth has his work cut out to create an interesting course on generally flat land.

So far, any architect would be excited at the thought of such a piece of land. Now the difficult part: the course will be daily fee, have houses in many parts and features a power line running through it. To deal with the anticipated (and hoped for) amount of play, Doak created moderate to large greens, allowing for ample hole locations to spread out the wear and tear on the greens. However, the undulations on the greens ensure that the greens hold the player’s interest, with his approach shot, chip or bunker shot and putting. With the housing, Doak did the best he could by angling the holes away from the housing as much as possible so that the buildings do not serve as a backdrop. The power line is just an eyesore about which no architect could solve. These undesirable features are handled well at Riverfront, and the player can focus on his golf and on the course without being distracted by the peripheral mess.

A key feature of Riverfront is the quality of and variety in the green complexes. Several greens (e.g., the 1st and 7th) are crowned, requiring extreme precision in the approach; others (e.g., the 3rd and 14th) are of that fun type that run away from the player; and some (e.g., the 2nd, 5th, 9th and 16th) are significantly pitched from one side to the other, allowing the player to use the slopes to work his ball toward the hole. All these holes share the common theme of requiring the player to think where he wants to land his approach, an area that often is not the same as the hole location. What a delightful change from all the holes (and courses) where the player needs only to take aim on the hole, as if it is an insult to ask the player to exercise his brain.

1st hole, 420 yards: A wide (70 yards) fairway for an opening hole, yet a sprawling bunker that separates two sides of the fairway, albeit somewhat short of the landing area, keeps the player’s attention as he needs to make an honest swing to carry the sand. Also, the trees encroach on the second from the right, making the left side the preferred angle for approach, requiring a more demanding tee shot. This tee shot is somewhat reminiscent of the 16th at Kapalua’s Plantation course, in that the preferred angle for the approach is ‘away’ from the player off the tee and provides a longer second than does a drive down the direct route.

The best line off the 1st tee is over the right edge of the fairway bunker.

2nd hole, 205 yards: At first glance, this appears a fairly hum-drum, long par three with bunkers on each side. However, this wild green adds heaps of interest as the player can use the slope at the front-left to find the hole, whether from the tee or a greenside bunker.

3rd hole, 485 yards: The authors’ favorite hole on the course and a contender for their favorite in Virginia, this big par four gracefully sweeps to the right around the tidal marsh after the straightaway drive. The second is to a long, narrow green with the front the highest part of the green. The green and its undulations short and to the left are perfectly angled to accept the long approach.

Taken from 200 yards out, the green races away from the player once he carries the massive greenside bunkers on the right.

9th hole, 395 yards: This is the type of hole (of which there is invariably at least one on any course) that testifies to the skill (or lack there of) of the architect. The hole is laid out over the least distinguished part of the property – dead flat with no water and no trees, leading back toward the clubhouse and parking lot. With no natural features, it is up to the architect to inject character. Here, Doak successfully did so by creating a dog-leg to a strongly undulating green. Even though the flagstick is visible from the tee across the bunkers at the corner of the dogleg, forcing the player into what feels like an unnatural play – to play away from the hole with his tee shot. The second shot is to a pushed-up green where the left side is several feet higher than the right. What makes this green intriguing is that the bunker to the right appears to be the principle hazard and that the approach seems to become that much more simple by the strong left-to-right slope: aim left, away from the bunker, and let the ball feed toward the hole. That strategy works well, however, until the approach is not hit exactly where the player intends. If he misses the green to the left, he ironically faces a more difficult recovery shot than from the right bunker, where the player could use the slope as a backstop. The one quibble the authors have is a concern over whether there are enough hole locations on this sloping, relatively small green.

12th hole, 460 yards: Clever use of the lake as the gofer plays along side it before playing across the corner of it. The hole is made by the hog’s back fairway and the appropriate amount of room around the green for the heroic second.

The sloping fairway compounds the challenge of the 12th.

13th hole, 185 yards: Our favourite one shotter on a course full of unusually good par threes. The obvious trouble is front and left, meaning most golfers steer their shots long and right. From there, they have no chance of an easy up and down as the back right bunker and surrounding contours conspire against them. The golfer who can control his nerves to successfully go after a back hole location will be rewarded with the most satisfying shot on the course.

The 13th is another superb one shotter.

14th hole, 550 yards: An interesting three-shotter where the key shot is, unusually, the second. There is plenty of room off the tee, encouraging the player to let out the shaft, but the second is the pay-off, as, depending on how it is played, the player can face a blind 7-iron or a pitch to an open green. The fairway bunker (yes, it is actually in the fairway) some 130 yards from the green dictates the strategy for the second as the player must effectively decide between laying up short of it or knocking the ball over it as there is little room to go right of it.

These bunkers determine the correct play for your second shot on the 14th.

15th hole, 395 yards: Tom Doak’s first Cape hole of the authors’ acquaintance, this medium two shotter offers the most intimidating shot on the course with its tee shot across the bluffs of the tidal marsh. The approach shot is surprisingly straightforward, perhaps so as not to take away from the beautiful view of the river beyond, the only such view on the course.

A Cape hole – the 15th at Riverfront.

Another laudable feature of Riverfront is its use of alternate tees. Because of the tidal marshes, on a number of holes (e.g., the 1st, 5th, 13th and 15th) the forward tee(s) must be located across or to the side of the marsh. However, much thought was given to the play from these tees and there is no sense of starting the hole from a ‘wrong place.’ Too often such tees appear to have been an afterthought, added when it is suddenly apparent that a 20-handicaper couldn’t make the 200 yard carry.

Riverfront brings very good (and even affordable!) golf to an area that is curiously starved for it. The Cascades in the western part of the state is the only top class course in the Virginia. This is a mystery, given that the Suffolk-Norfolk-Virginia Beach area occupies desirable sandy ground featuring plenty of waterways. If other courses in the area can follow in the foot-steps of Riverfront, then the Virginians may begin to catch up to the quality and depth of golf found in the Carolinas.

The wind makes the short 11th an elusive target.