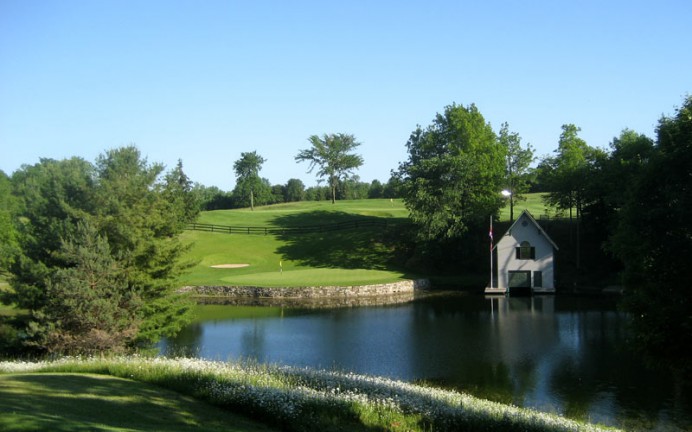 The view from the ninth tee highlights the secluded nature of a game at Redtail.

In 1988, after months of searching, John Drake and Chris Goodwin finally located an ideal block of land one mile from Lake Erie on which to build their long time dream course. The desired solitude needed to create a true retreat was here in spades. As a testimony to that fact, over one hundred varieties of birds call the course home at one point or another through the year. More importantly, unlike the surrounding flat farmland, this property had the distinguishing feature of ravines randomly spread throughout the property.

The key for the two owners was to find a firm who would make the most of this rustic property. The Drake Goodwin partnership told perspective architects, ‘We would prefer a design that preserves the natural features of the property, bordering almost on the wild.’ Only a minimalist design would be well suited to this site. The ravines were always going to give it a certain difficulty but the land on top is gently rolling and any significant movement of earth would sorely stick out.

The question was: which architect to select?

Every architect proclaims a minimalist approach to course design: ‘We move as little earth as possible while maximising the natural features of the land.’ Yet, how can design firms from Coore & Crenshaw to Nicklaus to Renaissance to Rees Jones sound the same when the final products are so markedly different?!

Something doesn’t add up. Some self-proclaimed minimalists never have the same par hole back to back, following the example set by the front nine at Augusta National.  How can this be? I fone really follows the land, wouldn’t one end up occasionally more like Cypress Point with back-to-back one shotters as well as three shotters? Also,some claiming to be ‘minimalists’ liberally pepper their courses with bunkers, which are man made contrivances (at least now a days). Indeed, many of these bunkers serve only a decorative purpose.

While other architects talked about moving this and shaping that, Drake Goodwin ended by selecting the United Kingdom based firm of Steel & Associates. In doing so, they took a chance as this would be Steel’s first assignment in North America. Nonetheless, the gamble paid off and Drake Goodwin were rewarded with a neat low profile course.

The first chore for Steel was to determine the ideal routing. If they crossed the ravines too much, the bridges alone would sink the budget. Nonetheless, Steel and his associate Tom Mackenzie wisely incorporated the dominant feature of the ravines into no less than thirteen of the holes.

As for the design of the holes, Steel & Associates don’t believe in dotting the landscape with bunkers that are a) out of play and b) serve only to make a shot potentially easier. As a result, Redtail has less than thirty bunkers all told and six of them are on the gambling three shot thirteenth. 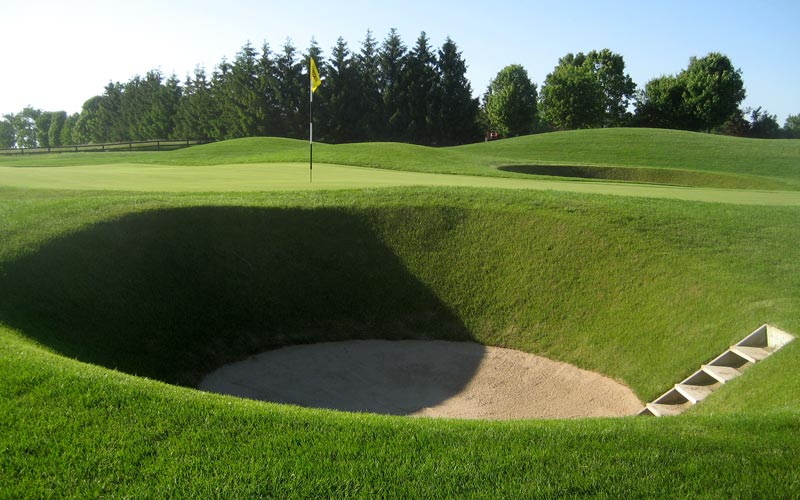 Their minimalist approach is further indicated by the fact that they didn’t hurry to conform to any pre-set pattern of where ‘par’ should fall. For instance, the first one shotter isn’t until the seventh then three one shotters follow in the ensuing seven holes. Why? Because that was where they fell in the best routing.

Apart from the ravines, Steel, and in particular Mackenzie, who spent months on site, paid particular attention to the greens themselves. The result is some of the best interior contouring that can be found in any medium size greens in North America. Combined with the swift pace that is only achieved at a club with limited play, these greens lie at the heart of Redtail’s challenge. They aren’t overtly dramatic withfive foot falls and such. Nonetheless, they offer numerous hole locations that tax the very best golfer’s short game. By the time the golfer makes it around to the treacherously sloped fourteenth green complex (the site for which Chris Goodwin found), he will truly appreciate that this is a placement course first and foremost. 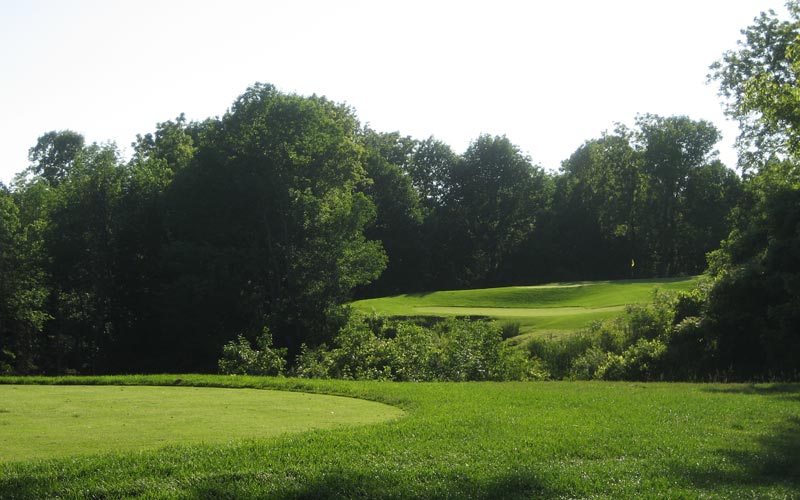 The use of knolls that feed into the greens is a prominent feature on holes three, four, five and twelve. For instance, with the third green, one knoll left and another back right makes it imperative to come at the hole straight on; an up and down from either side of the green is both taxing and highly unlikely. 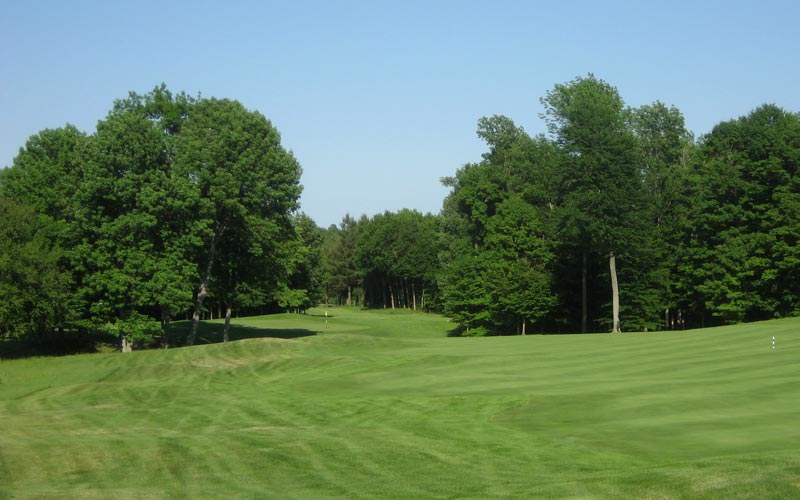 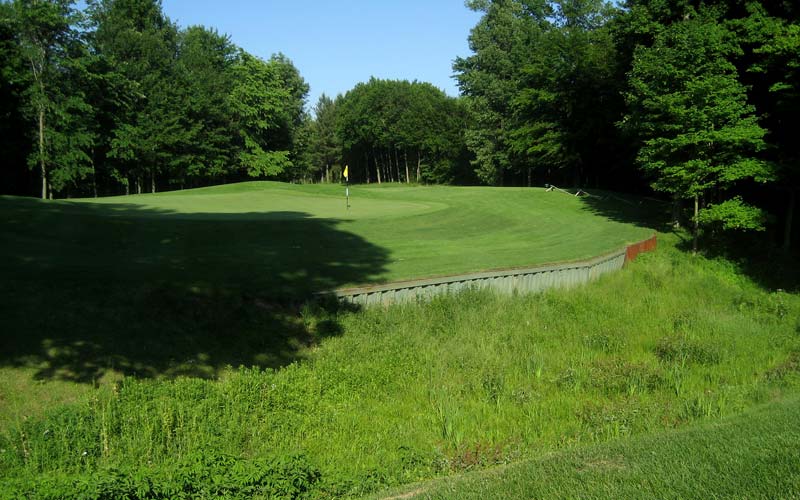 As a direct result of these greens, the appeal of Redtail lies in its two shot holes that measure under 400 yards. Steel & Associates, as is evidenced at The Carnegie Course at Skibo Castle, have a knack for creating interesting holes less than 400 yards. It is a lost art form to all but a few architects and more is the pity. At Redtail, with the first, fourth, sixth, eighth, tenth, sixteenth, and seventeenth, they created holes of both appeal and challenge. At the first and sixteenth, Steele and Mackenzie relied on making the green shallow (twenty-one and eighteen yards deep respectively) with tremendous back to front tilt. With holes four and six, they made longer, narrower greens with a vicious spine in the middle. With hole eight, the principle challenge shifts to the tee shot: the golfer is given the option of laying back or crossing a ravine with a drive that must carry 230 yards. At the tenth, the green location makes the hole as a ravine wraps around its back and side. Finally at the seventeenth, the fairway contours are the boldest on the course and force the golfer to hit a shot from a lie from which he may or may not be entirely comfortable. 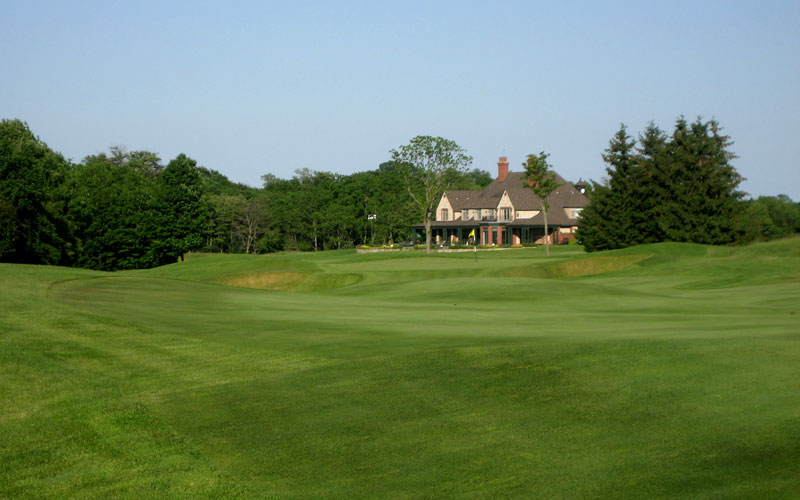 Golf courses often benefit from autocratic rule and Redtail is no exception. Given Chris Goodwin’s accomplished abilities as a player, Redtail has always been a precise test appreciated by better players.Some of Redtail’s features such as the exactness demanded by the narrow opening between trees shy of the fourth green would be challenged by a typical North American green committee or its members; such is not the case here. 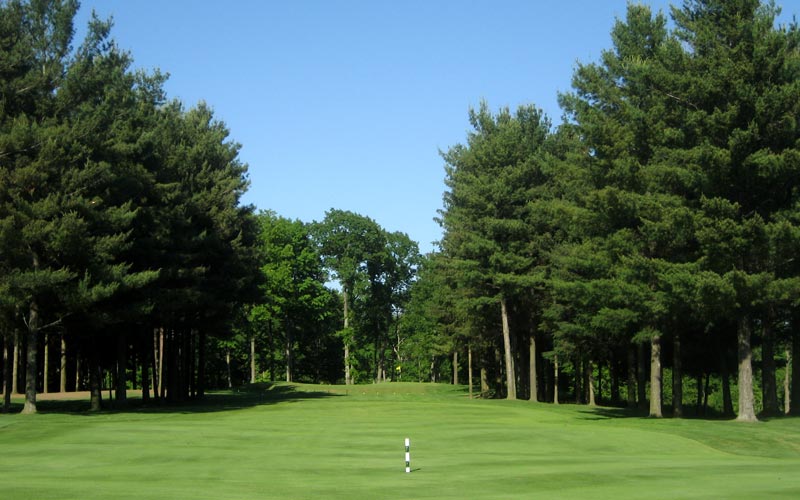 This array and diversity of challenge within the medium length two shotters give Redtail a unique identity. Some holes like the sixth may almost seem a touch awkward with its elevated green surrounded by the ravine on three sides, but the hole is an original and all the better for it. Far too many designers ‘beat’ a hole to death (translation: move a lot of dirt) until as the years go by, all the holes take on a certain sameness as the unique features of each site were obliterated. This is patently not the case at Redtail, as the course reminds one of no other. 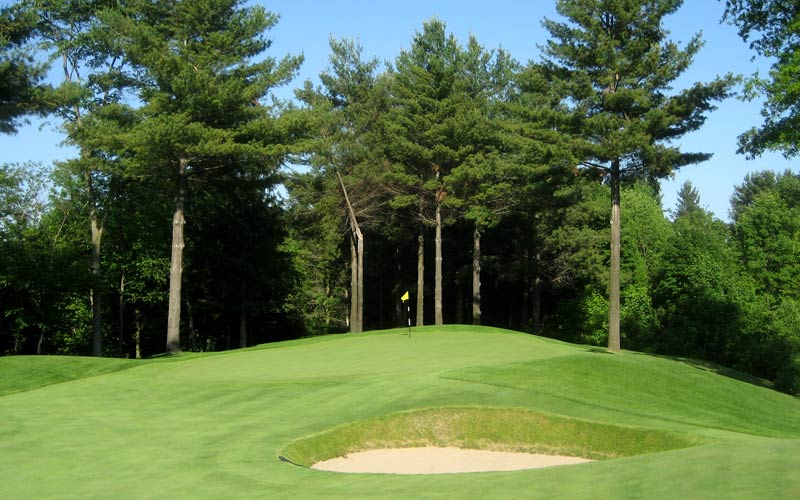 The elusive sixth green complex with its 3,300 square feet green requires a very crisp short iron. Small greens work well at Redtail, as a result of its limited play.

Any course with interesting greens can feature many holes under The Holes to Note section. We have chosen a few other than its medium length two-shotters.

Fifth hole, 535 yards; Full credit goes to the architects on this hole for their ability to find the perfectly canted fairway on this double dogleg. From the tee, the hole swings to the right and the fairway is perfectly sloped so that the appropriately shaped fade will run an extra twenty yards. It is easy to appreciate the hole now but to find it when it was 200 acres of wilderness is amazing. And the golfer wants to gain every extra yard off the tee possible for the second shot must ideally cross a stream some 140 yards shy of the green. The golfer wants his most precise club into this elevated green as it follows the slope of the terrain back to the golfer and is blisteringly fast. Lorne Rubenstein tells the story where his missed eighteen foot putt from above a back left hole location ended up fifty feet away – the resulting four putt and double bogey did little to aid his cause. 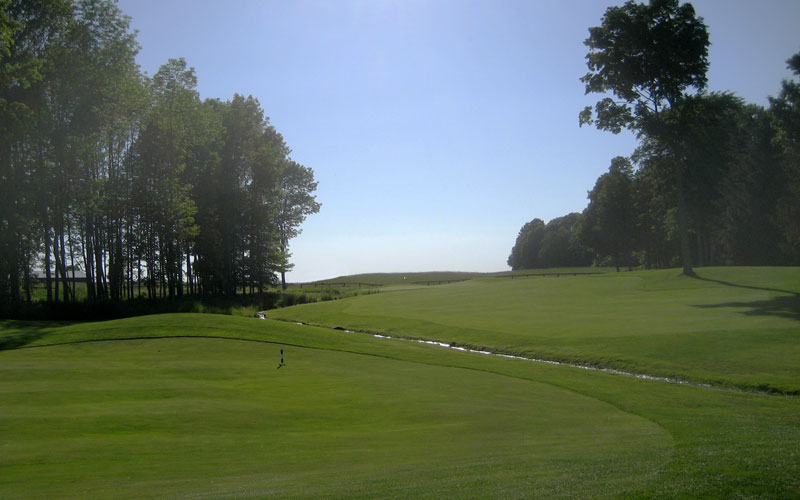 The winding fifth is bisected by a tiny brook, which dictates how the golfer plays the hole. 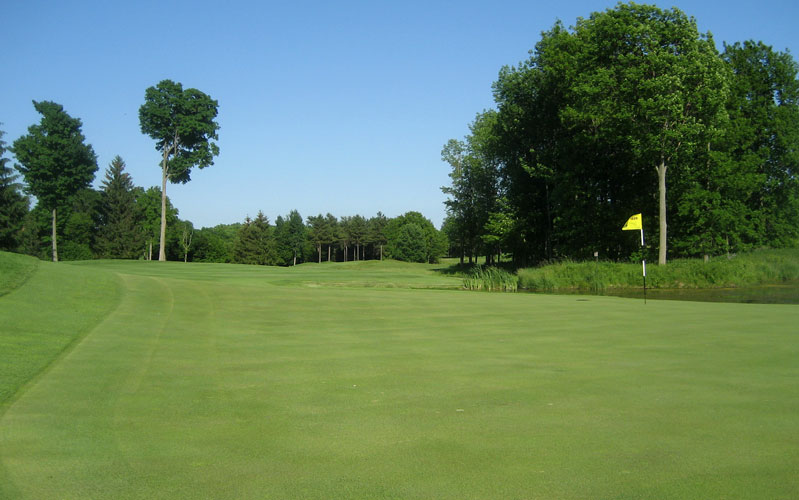 From behind the green, the golfer appreciates how the heavily canted green slopes toward the water.

Seventh hole, 220 yards; This one shotter plays across a ravine to a diabolical green complex with a false front right and bunker back left. The obvious feature is the ravine that wraps close toward the back right of the green. However, the real challenge is more subtle and rests with the left to right tilt of the green. The over-cautious golfer will bail to the left, away from the ravine. This missed shot tends to be a pull and is long left. From there the golfer is d-e-a-d. To keep the ball on the green is a feat, never mind an up and down. 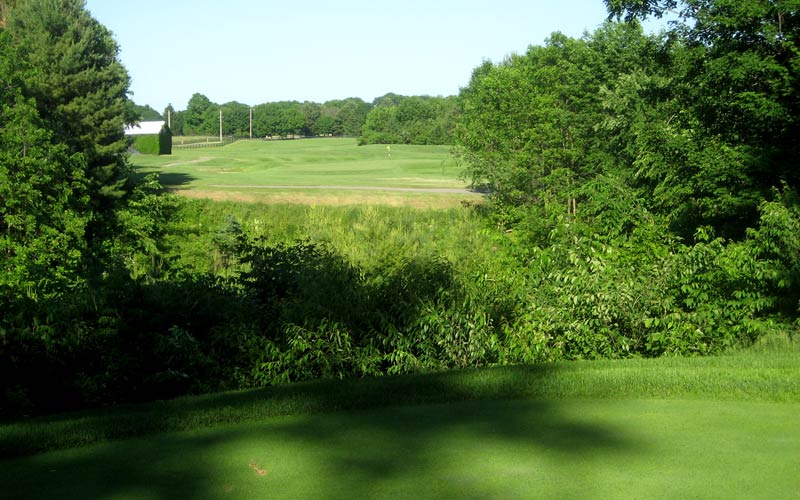 The intimidating tee shot on the seventh hole. 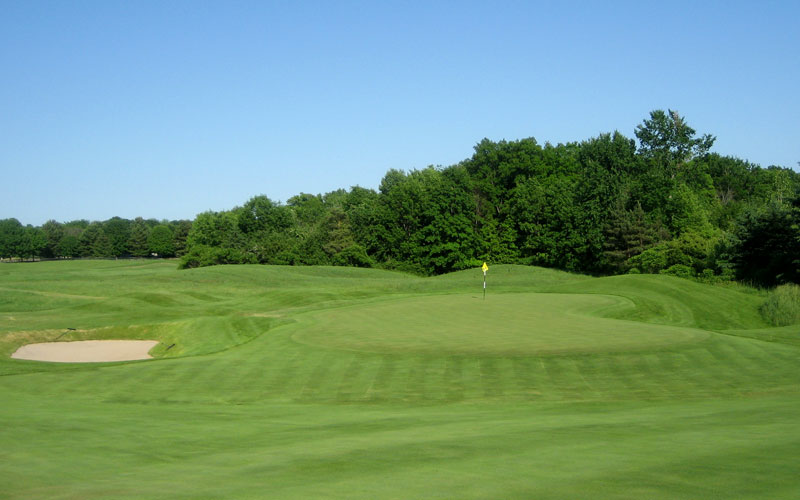 However, the real terror is the subtle left to right tilt of the firm green.

Eighteenth hole, 520 yards; As acknowledged by Bill Coore in a Feature Interview on this site, a reachable par five may be the hardest type hole to design as it must remain playable for all calibers of players. This swing hole succeeds admirably on that count. In addition,any approach played from 130 yards to eighty yards into this green is done so right at the base of the clubhouse. Its stone verandah is the perfect spot to overlook the proceedings and to greet home each match of your friends. 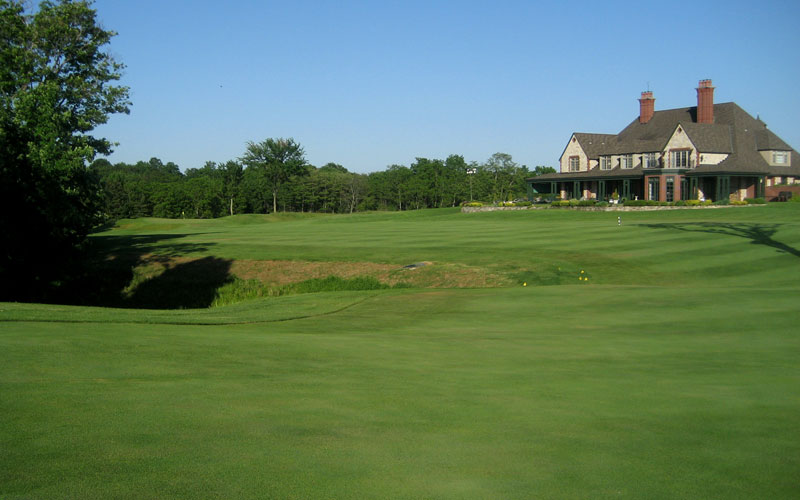 From the landing area of the three shot eighteenth, the golfer must decide which avenue of attack to pursue. The clubhouse 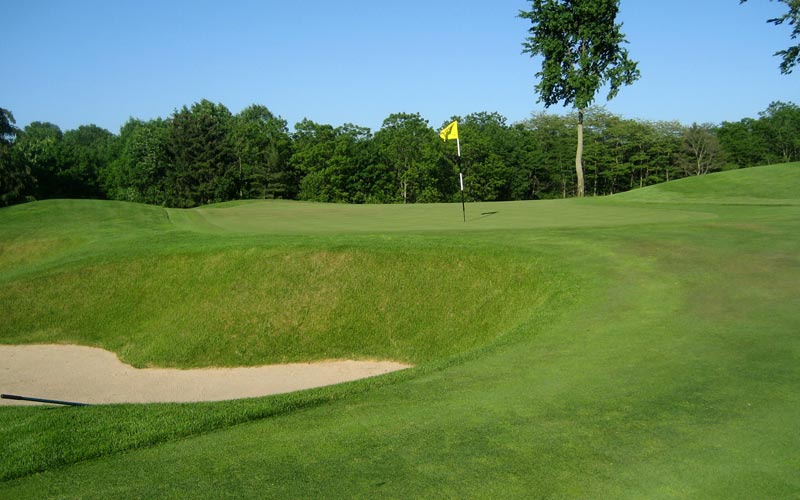 Repeated play makes the golfer leery of approaching the eighteenth in two, for fear of this difficult up and down.

Speaking of the clubhouse, no description of Redtail is complete without it. Only at Skibo and a few other courses have the authors remarked on a clubhouse but this must be one. The interior is one big den with heaps of nooks and crannies to which the golfer and his mates may repair. There are also several rooms upstairs to accommodate a few guests. A tremendous amount of thought went in to getting the details just right and lessons were learned from such grand old clubhouses as Merion, Oakmont and Pine Valley. Most importantly, the finished product is the exact opposite from the forced stuffiness that some wannabe clubs suffer through; the interior is meant for relaxation with one’s friends. 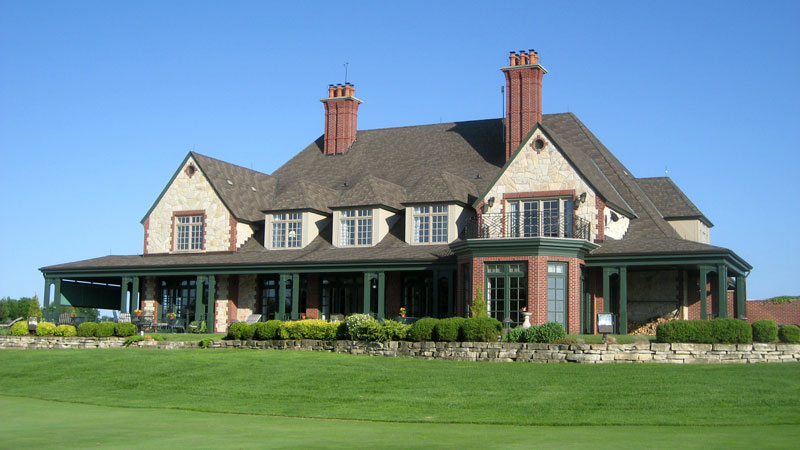 One of the joys of being a Redtail member is passing the hours in this beautiful clubhouse.

As much as one may want to recline in a leather chair in front of the fire,one must get out on the course. It is the kind the game needs more of – a low profile design that relies on vexing green complexes rather than on length. Nothing is overdone and as Brad Klein says, it is ‘pure golf.’