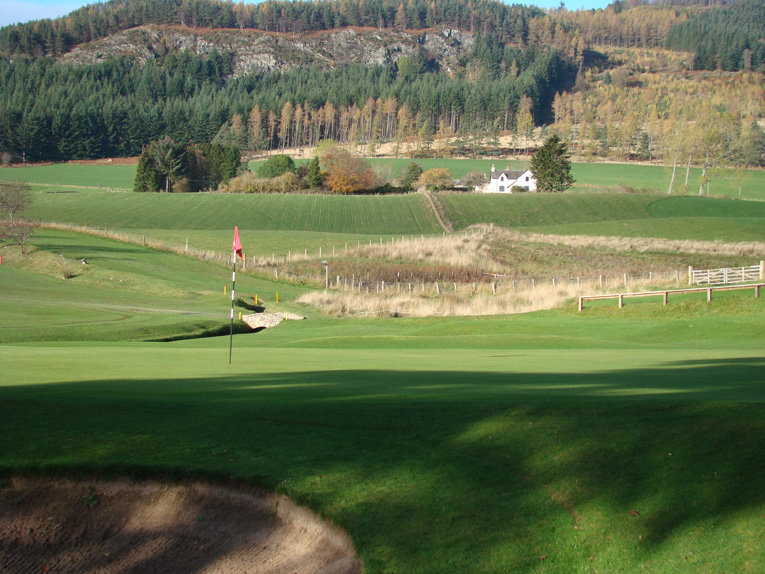 Golf at Pitlochry is defined by the bracing air and long vistas.

This course profile is a little different. We aren’t going to bang on much about specific holes or particular bunkers. Indeed, not a single photograph of the course’s most famous hole is included. If you want to see the sixteenth (a postcard perfect downhill one shotter ringed with trouble),  you will have to visit! Instead, we take a ‘big picture’ view of the golf and the region in general as a source for outdoor pleasure.

First, a tip of the Harris Tweed cap to the club for including in club parlance a ‘wee’ course of six holes in the ~60 yard range. From children to the ace player desirous of keeping his short game sharp, everyone can have fun playing Lettoch Links. Located behind the first tee to the main course, it’s a fine idea, very well executed and it speaks volumes as to how well the club understands that golf is meant to be enjoyed by all. The relative absence of comparable venues in America is symptomatic of the sport’s illness there where people tend to take the sport way too seriously. 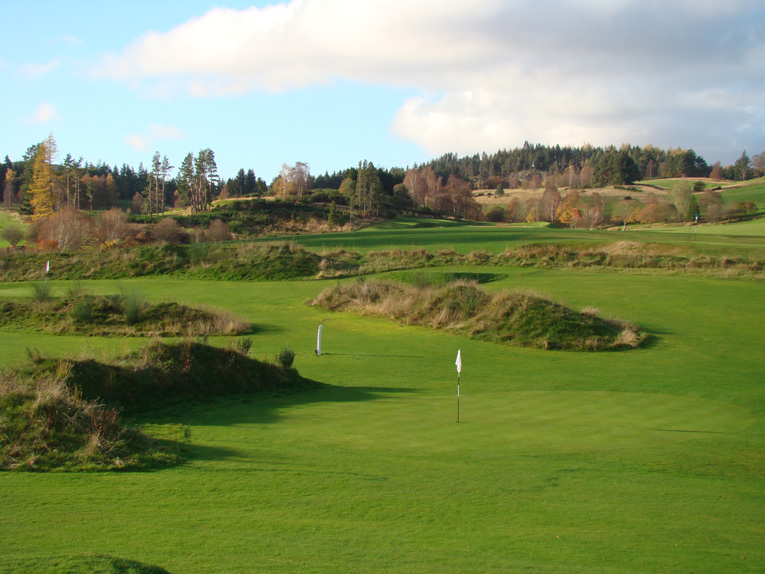 Time to head over to the ‘big’ course which measures less than 5,700 yards. Willie Fernie, from Troon, laid out the original eighteen holes in 1908 and Major Cecil Hutchison reconfigured them a bit in the 1920s resulting in today’s layout. Like Seth Raynor at Monterey Peninsula Country Club, the architects at Pitlochry shrewdly send the golfer uphill for the first three holes. After the ascent, the best golf ensues. 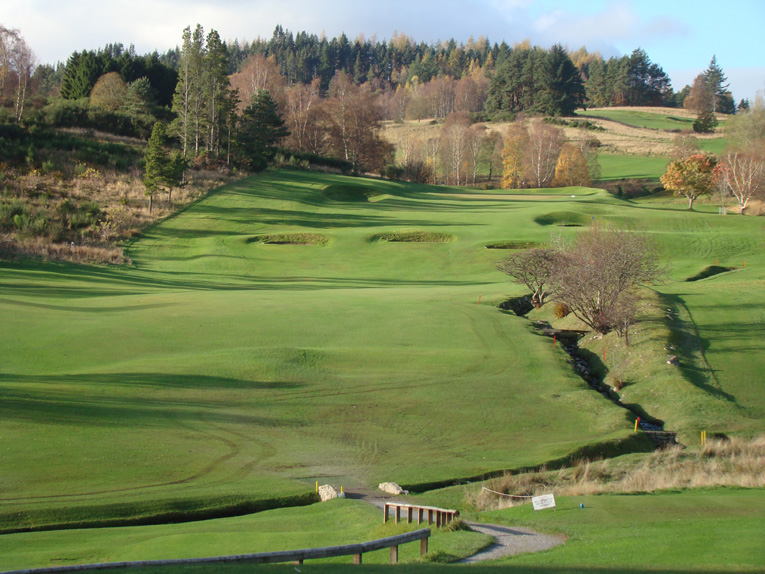 Despite being uphill, the golfer looks forward to tackling the first at Pitlochry.

Ironically, there are only three par 3s at Pitlochry. Each one is better than the previous and the very good fourth hole, the ‘worst’ of the set, bleeds strokes from even the best. The fifth hole, named Queen Mary’s Rest, features one of the most unusual green sites the author has had the pleasure to encounter. Story has it that the famous queen camped near here in the sixteenth (!) century. 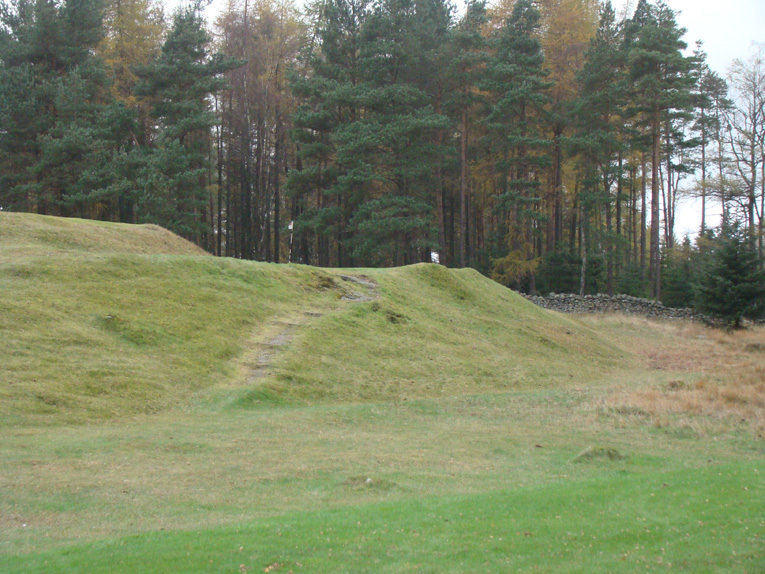 What a delight to hit a crisp iron onto to the large plateau fifth green situated on top of a rock formation. The green is so deep that an extra tall flag stick is utilized.

The outward nine’s upper reaches enable views of the surrounding Perthshire highlands quite reminiscent of the splendor at Gleneagles to the south. 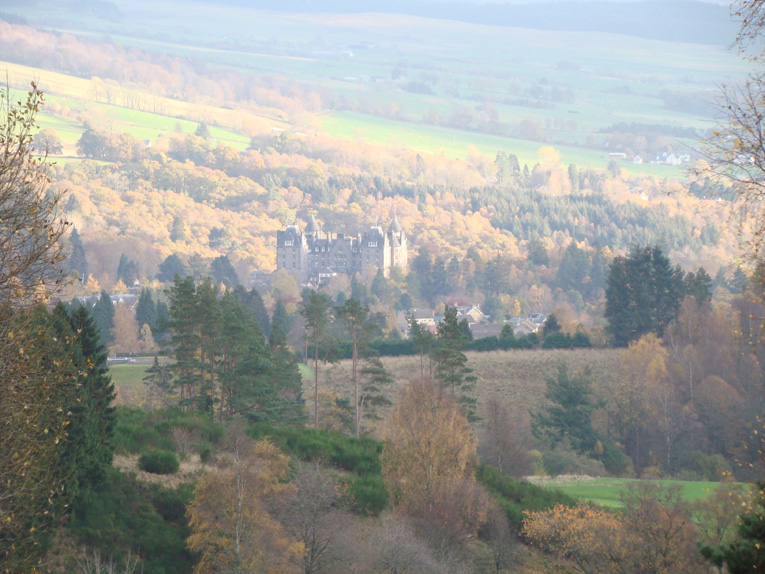 Seen from near the sharply downhill ninth fairway, the baronial Atholl Palace dominates the countryside. 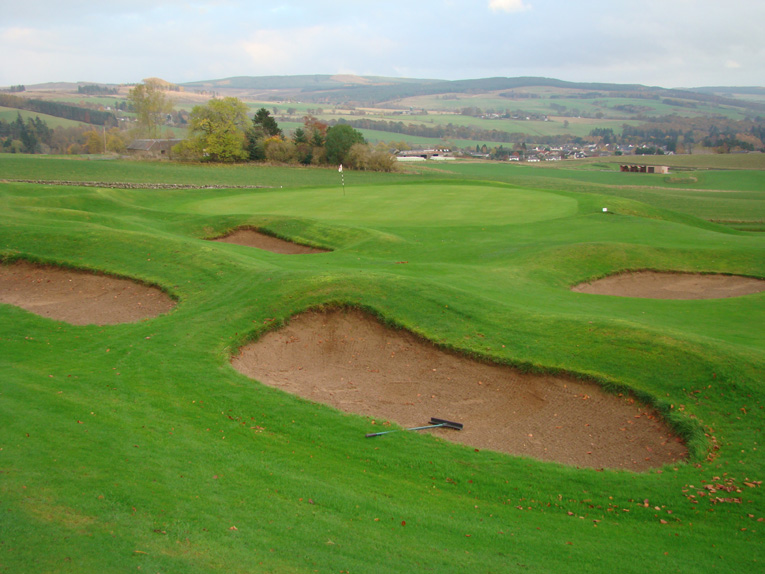 Out of bounds and deep bunkers on the inside of the short 345 yard dogleg ninth frustrate imprudent play.

The rugged inward nine requires bigger hitting, more often. Ten, a stout two shotter to a green tucked down in a valley, is the longest hole on the course at 420 yards. The eleventh hole then plays perpendicularly across the valley and another 400 plus yard two shotter follows. Greenside bunkers well below the putting surfaces and sloping greens lend the challenge on the nine’s two uphill holes (13 and 15). Sandwiched between, the fourteenth may well cement your fondness for the course – or not! Some cruelly view it as a dinky downhill 275 yard par 4 and sniff that this isn’t proper golf. Treat it as a one shotter and it’s the very equal of the mighty – and highly respected – thirteenth at The Addington. At both holes, the sight of a well struck three wood soaring high toward the target is a thing of great beauty to be savored. Don’t get caught up in ‘par’; just enjoy the challenge and character of the shot itself. There’s a bunch of fine ones at Pitlochry. 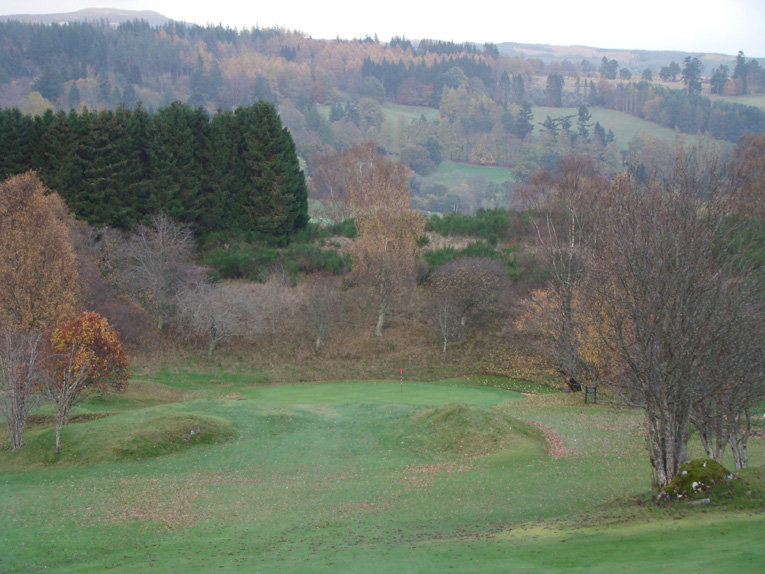 The fourteenth tumbles downhill across interesting landforms. What a fine time to get away a big poke on this 1/2 par hole! 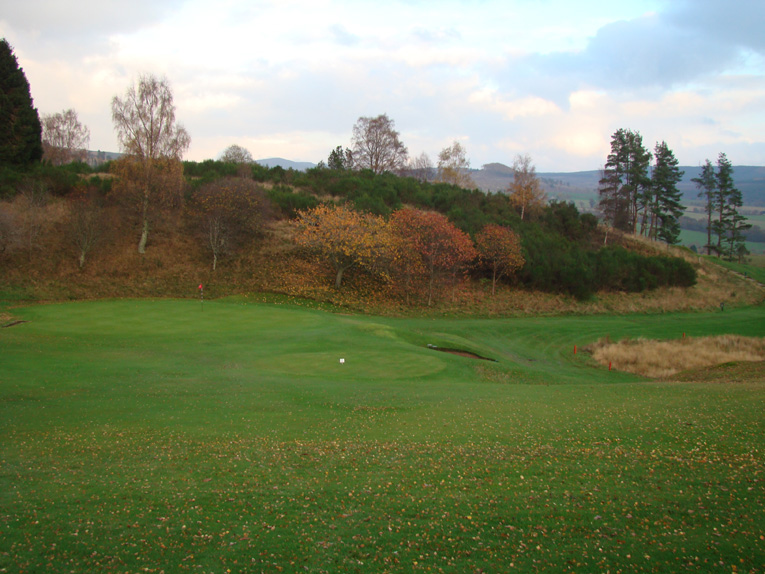 The backdrop for the fourteenth green is quite handsome, even in November. 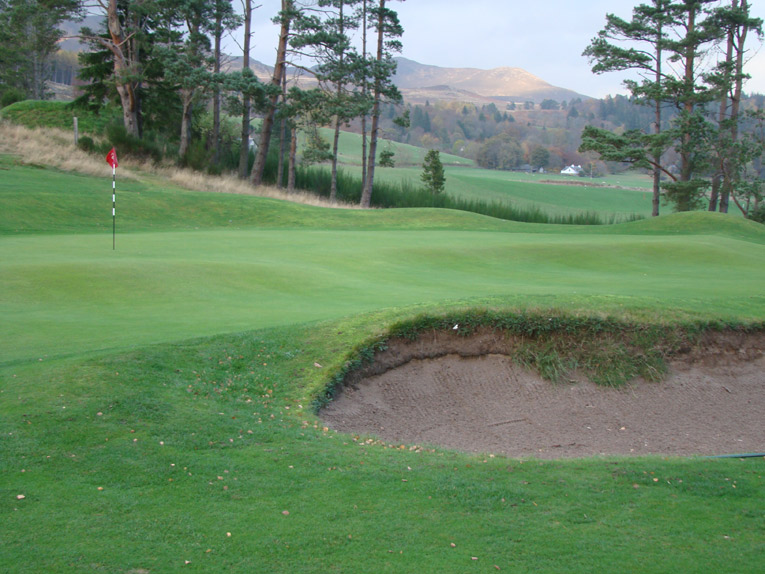 Greens like the second and seventeenth (above) feature interior contours that have befuddled the best, including Walter Hagen and Max Faulkner. 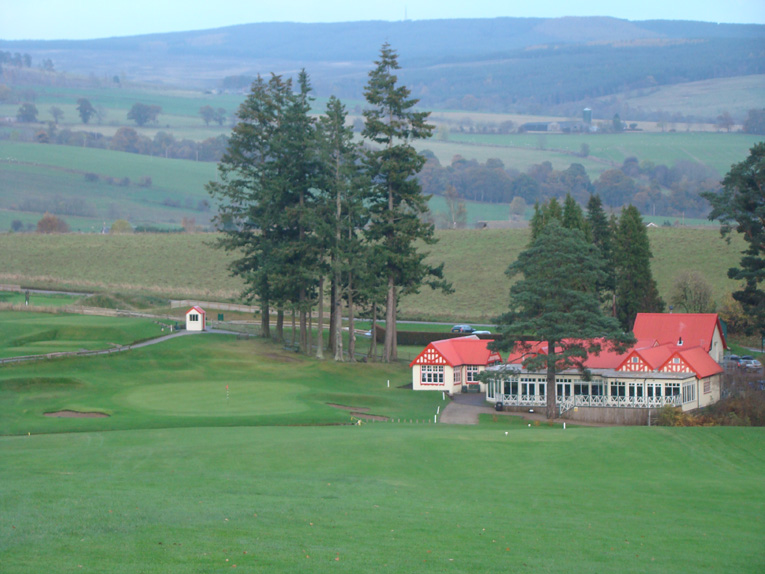 The Home hole plays steeply downhill toward the snappy, red-roofed clubhouse and professional shop where the day’s final challenge rests in clearing a burn that fronts the green.

“Switzerland of Scotland”, the town moniker, suggests that Pitlochry’s soil is not sandy by nature so catching the course during dry periods adds to one’s enjoyment. The moniker also aptly conveys that countless other walking activities exist. The most strenuous and memorable is the hike up Ben Vrackie, a peak some 2000 feet above the village. As we learned the hard way, the weather changes without warning so setting off prepared is essential.

Just a ten minute stroll from the course is the Moulin Inn, which first opened its doors in … 1695! Its brewery in the old coach house around back uses local ingredients to provide the right, proper taste of Scottish ale. 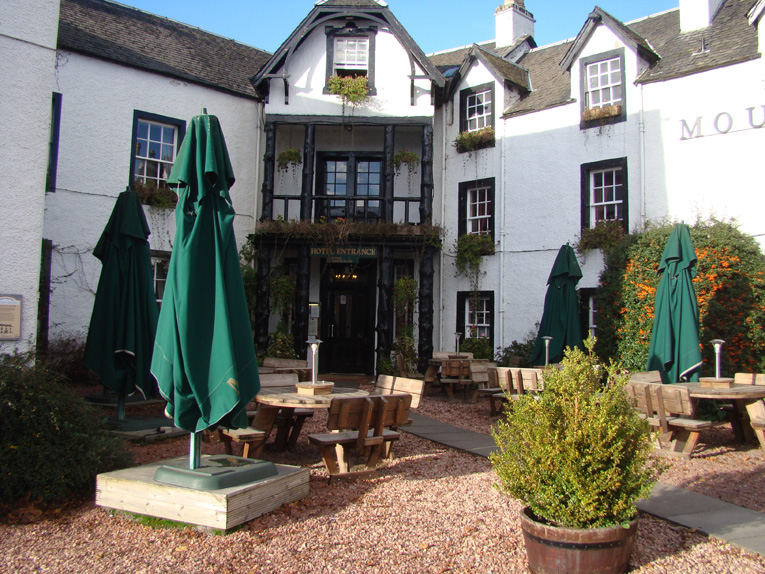 Not just a pub but a microbrewery awaits you at the Moulin Inn. Even without a translator, the above ‘rules’ found inside the inn signify the fun, cozy atmosphere in the low roofed bar area.

The town of Pitlochry is charm personified. If the ubiquitous golf storefronts in St. Andrews, an hour and a half drive to the east, wear you out, come here and a stroll around. Incidentally, not to be outdone by the Ladies Putting Green at St. Andrews, Pitlochry Golf Club maintains a rousing putting green one block off the main road. Junior events are routinely staged here. Featuring over a fifteen foot drop, the eighteen hole putting green is a treat for all and epitomizes how communal golf is in Scotland.

If your bank account is sufficiently buttressed, by all means stay at Fonab Castle, which re-opened in 2013 and gracefully earns each of its five stars. Ideally situated, Fonab is a gentle walk downhill to the Festival Theatre, where a fine variety of performances are featured yearlong. We saw The Lady Killers with its charming hook that went something like ‘even the slightest act of good can bring down the worst of people.’ Fonab Castle sits high on a bluff overlooking Loch Faskally, which was created when the dam was built. The diagonal crosswalk seen on the hillside takes you down to the dam.

Fonab is located within a stone’s throw of the Pitlochry dam and walking across the dam is a must do activity as it provides all kinds of fine perspectives of the area. Opened in 1952, the Pitlochry dam famously features a ‘fish ladder’ that allows salmon to climb the river via 34 tiered chambers of water. 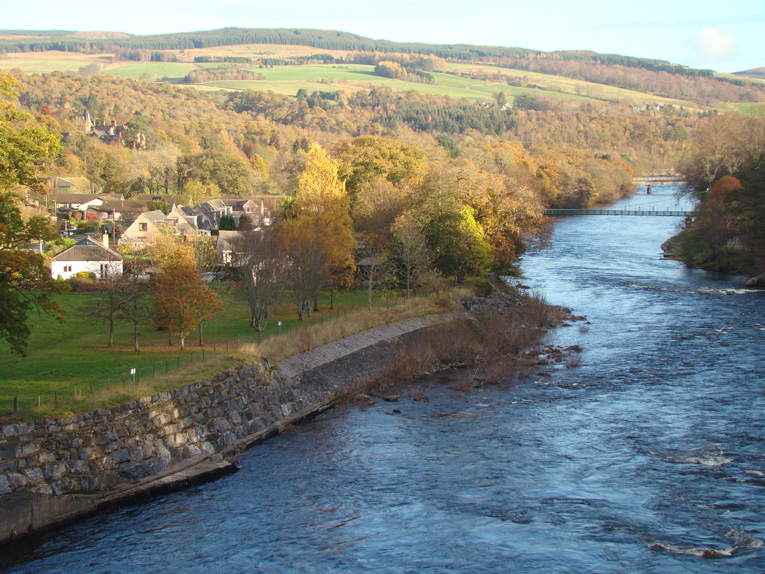 Here’s a view from atop Pitlochry dam.

There you have it. What more does a golfer really need – or want? By their nature, golfers are outdoor enthusiasts and few places can lure you there more. Time here is very well spent, with and without golf clubs.