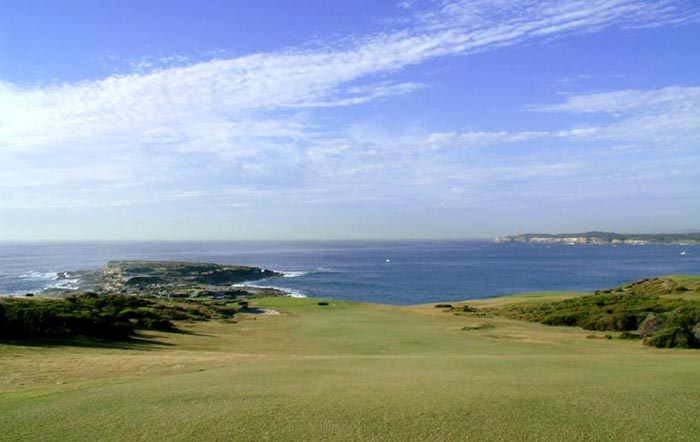 The awe inspiring view down the fifth fairway.

Pebble Beach and Cypress Point are located along the spectacular Seventeen Mile Drive of the Monterey Peninsula. In the authors’ experience, the only other course in the world that can compete scenery-wise with these two giants is New South Wales GC. Located along the rugged eastern seaboard of Australia, the Pacific Ocean is in view on all but five holes. And yes, whale watching is available too.

New South Wales was fortunate that Alister MacKenzie got to this spectacular site first. Unlike lesser architects, he never sacrificed sound design for the sake of a few postcard holes. In fact, the hole he is most credited for at New South, he did not even build. An aerial photo after MacKenzie left Sydney from his first and only visit clearly shows that the next hole after the fifth was today’s seventh hole. The par three sixth simply did not exist. Nonetheless, like at Seminole, the routing is what makes the course and that has MacKenzie’s imprint all over it.

Like most courses built prior to WWII, New South Wales has evolved through several distinct phases. Unlike other courses, New South Wales has enjoyed the talents of noted architects who understood MacKenzie’s original intent. After MacKenzie left Australia, Eric Apperly, an accomplished Australian Amateur golfer, carried out subsequent changes including the creation of the sixth. As evidenced by Apperly’s work at Newcastle GC further up the coast, he was not afraid to go up and over ridges, as opposed to just playing through valleys. Thus the golfer at New South must attack the hills and ridges from all sorts of angles. Apperly’s approach to course architecture was consistent with MacKenzie’s: let the land dictate the holes and create the excitement. He moved little earth when he worked on the course after WWII. 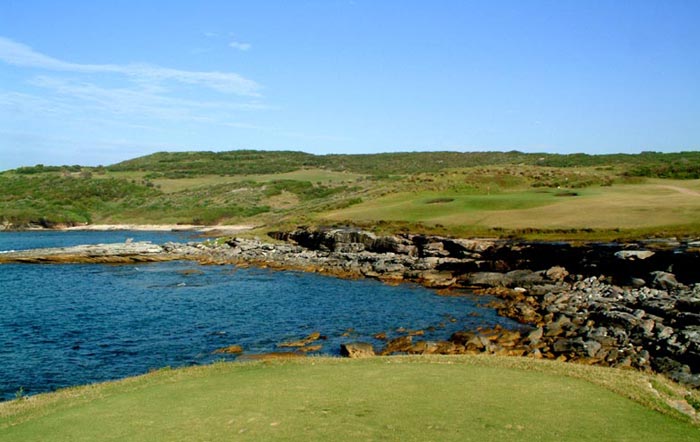 The club has had its share of tough times and inevitably, some of the artistry of MacKenzie’s work was lost. Tampering from lesser architects in the 1980s ruined the second green. Happily, those sadder times are long gone and New South Wales is justifiably enjoying a resurgence as one of the world’s must-play courses. Conditioning has improved immeasurably over the past decade. More importantly, the Club has hired a design firm to restore continuity to the course. Given the ferocity of the weather, a number of the bunkers are being rebuilt with revetted faces, which withstand the elements better. The bunkering is thus once again dictating the proper play.

In addition, some of the natural sandy areas had been grassed over through the years. These areas, such as down the left of the fifth and in between the eighth and twelfth, are now being restored to their natural sandy state laced with native vegetation. Thus, MacKenzie’s artistry, similar to that displayed at Cypress Point, is re-emerging. 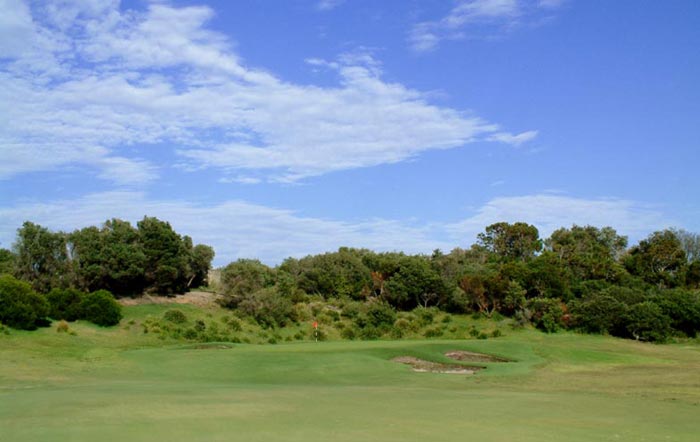 The eighth green nestled into the dunes.

The overall effect of the past 70 years is this course has actually been improved since the Good Doctor did his work. The authors contend New South would be one of the rare cases where MacKenzie would actually approve of the evolution of course as it exists today (whether he would admit to it is another matter).

Fairly normal wind is accounted for in the descriptions below. Otherwise, the 355 yard fourteenth can become a driver-driver affair.

Fifth hole, 515 yards; The flexibility of the hole is unparalleled in the authors’ experience and can range from a two iron third shot to a sand wedge second shot. From the tee to the green, there is a ninety foot drop. From the tee to the landing area is almost level, played across a valley. Therefore, almost the entire drop in elevation occurs from the 220 yard mark on. The back drop far below is the rugged shore line and the ocean. The hole can be played one of three ways: option (1) is a three iron into a valley, another three iron over the hill and then a nine iron. This option has some real appeal given the fairway ascends past the two hundred yard mark to on top of a mountain hemmed in by bottlebrush on both sides. Option (2) is a three wood to the crest of the hill and another three wood down to the green below. Option (3) is a driver which bounds down the hill and may leave only a short iron into the green in two. Regardless of how you play it, you will always remember it. 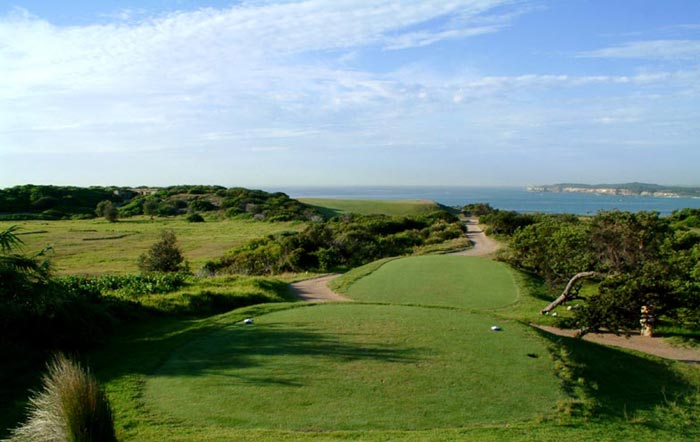 The intimidating tee shot on the fifth. If the golfer can carry the crest, his ball could get an additional 80 yards (!) in roll.

Sixth hole, 195 yards; The most photographed hole in Australia. Unlike the 16th at Cypress Point, the white and blue tees are in drastically different positions and their position influence the merit of the hole. From the blue tee perched out on the reef in the Ocean (you have to walk across a bridge to get there), the shot is one of the most thrilling in the game. From the inland white tee, the shot is more straightforward, calling for a seven iron up a hill to a big-ish green. The Club appreciates this fact and recently has undertaken to move the inland tee as close to the edge as possible. Regardless of the tee played, the right to left pitch on the green is its true defense in calmer conditions. The golfer who plays weakly away from the ocean faces a very difficult up and down from the right hand side of the green. Conversely, the golfer who takes on the challenge but misses the green slightly left faces an uphill pitch against the green’s slope for an easier up and down. There is a twenty yard buffer of grass between the green and the ocean on the left. Most people are so overawed by the setting that they don’t fully appreciate the architectural merit of the hole. It is a great example of the most obvious trouble (i.e. the ocean) steering people well away toward apparent safety. Only when the golfer gets up the green, does he appreciate how dead he is if he has missed the green to the right. 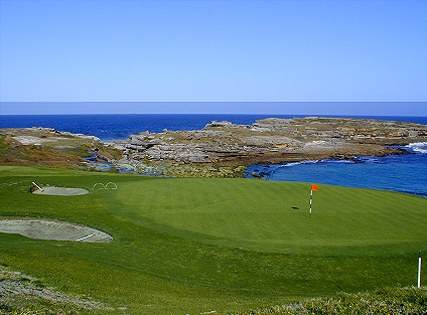 The dramatic 6th as seen from behind the green.

Thirteenth hole, 410 yards; A beautiful sweeping dogleg to the left that was recently voted the finest 13th hole in Australia. The nature of the curving fairway is such as to create real options off the tee. You can play straight ahead with a three wood and leave yourself with a mid-iron. Conversely, you can make the more aggressive decision and take on the dogleg. The dogleg is not overgrown with towering trees, which tend to take the strategy out of far too many doglegs; rather the low lying scrub here can be challenged. The pitch of the fairway down and to the left rewards the golfer who has accepted the challenge off the tee with a shorter iron to the green. The Pacific Ocean serves as the not unappealing (!) back drop for the approach. 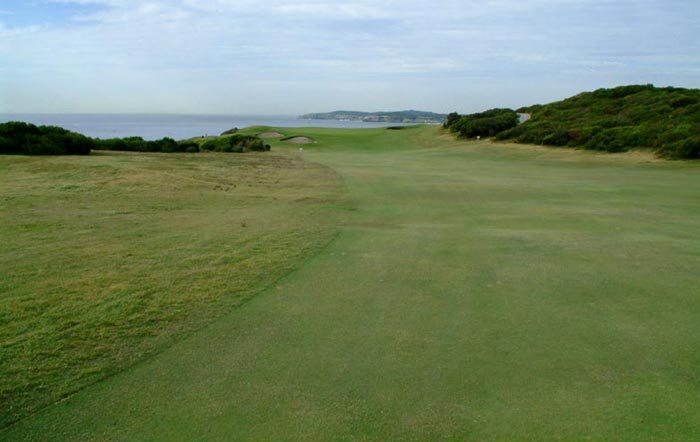 A well-positioned tee shot leaves this approach to the scenic 13th. 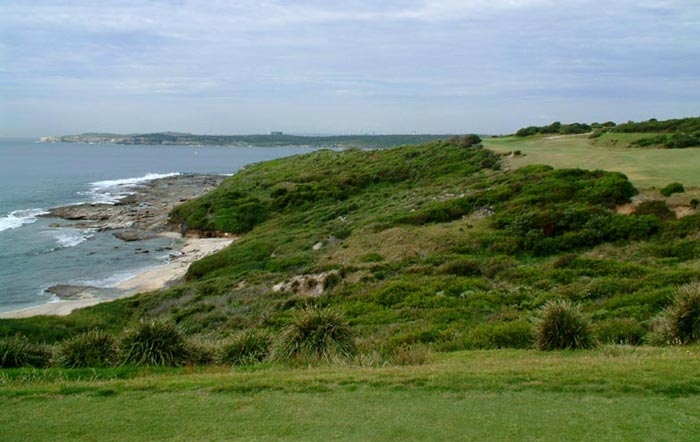 The short but wild 14th.

Fourteenth hole, 355 yards; A wild short four par and one of the best holes of its length in the world. The smart play is to hit a drive over a hill 210 yards from the tee into a saddle away from the ocean; from there it is a wedge up to a steeply pitched green that is fully exposed to the elements. The closer left toward the ocean the drive finishes, the golfer is rewarded with a more advantageous angle down the length of the green. Because the hole is relatively short, the low marker often tries to force the issue and secure a birdie. Far more bogeys than birdies result from imprudent tactics.

Sixteenth hole, 440 yards; A very fine, unforced dogleg left around a sand dune. A long drive to the outside of the dogleg gives an uninterrupted mid-iron down the green, which is actually bunkered on the left side. A drive to the inside of the dogleg can shorten the approach and the golfer may elect to use the bank to the right of the green to kick the ball back toward the flag. The Club recently removed some bush from behind the green. This wise move restores the view over the course and out across the Ocean that golfers would have originally enjoyed when the course first opened. 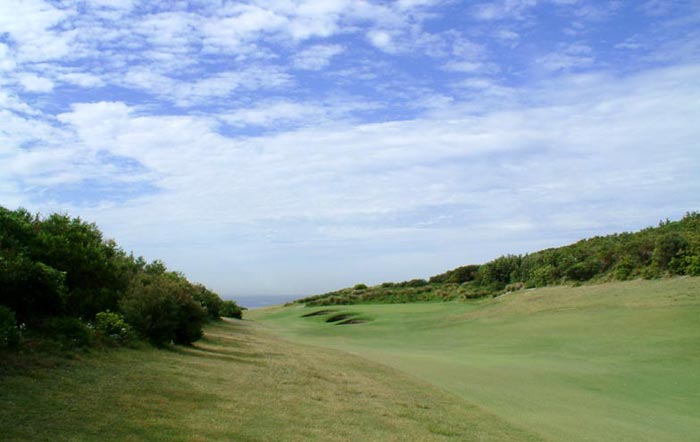 The natural green site for the 16th.

Another architectural feature is that the four par threes each point in a different direction on a compass. The greens of the two shortestone-shot holes are located on top of exposed knolls. They generally play around the 160 yard mark. Given this is one of the windiest spots in the world, controlling the flight of the ball on these two holes is a must. These seemingly innocent holes often give overseas visitors fits who are not use to playing in the wind. 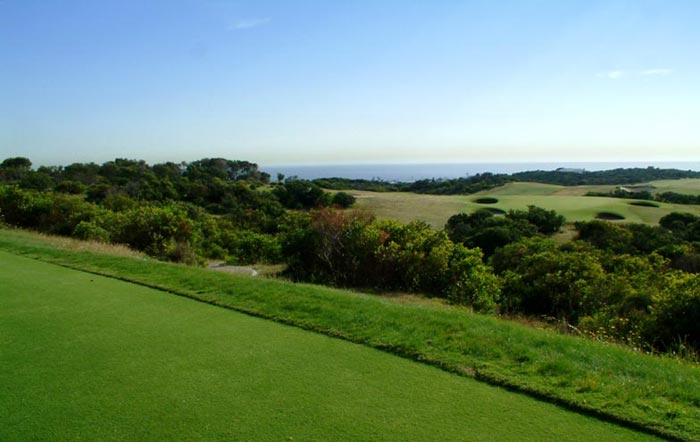 The exposed and pitched green of the one-shot 11th.

Does this course sound too good to be true? Surely, everyone would acknowledge this course to be one of the four or so best courses in Australia? Incredibly, the answer is sometimes no. The authors were present when a professional golfer proclaimed he viewed The Australian (a Nicklaus redesign set along a busy highway in Sydney) as a finer test of golf. His reasoning? New South tolerates several loose shots more so than The Australian. For instance, the tee shots on the fourth, eighth, and 12th all share the same plain and it is hard to find trouble. The authors acknowledge these holes are too egalitarian on those rare calm days.

Nonetheless, the comment highlights a great difference between amateurs and professionals. The Australian has one blind shot and affords the golfer one conventional approach shot after another, thus appealing to the professional. New South Wales enjoys six blind shots as the holes tumble over their dramatic terrain. The resulting holes are both original and give the course unmatched variety. There are no holes remotely like the fifth, sixth, fourteenth, or fifteenth in the world. The sense of adventure at New South is paramount; hence the sense of enjoyment is correspondingly high. These are the virtues the authors appreciate the most; some professionals perhaps less so.

New South is the best of both worlds. It hosted the Australian PGA Championship for four years and kept the professionals at bay without growing the rough. Much more importantly, it is a great members course whose challenges change day to day with the weather. Just ask one of their newer members – Greg Norman. 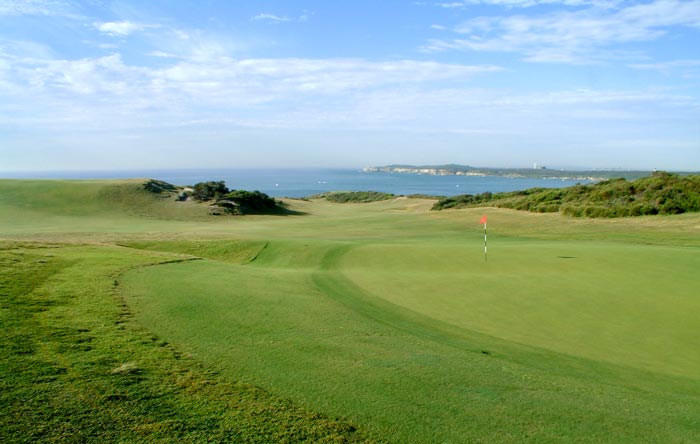 Battling the wind on a typical day at New South Wales.