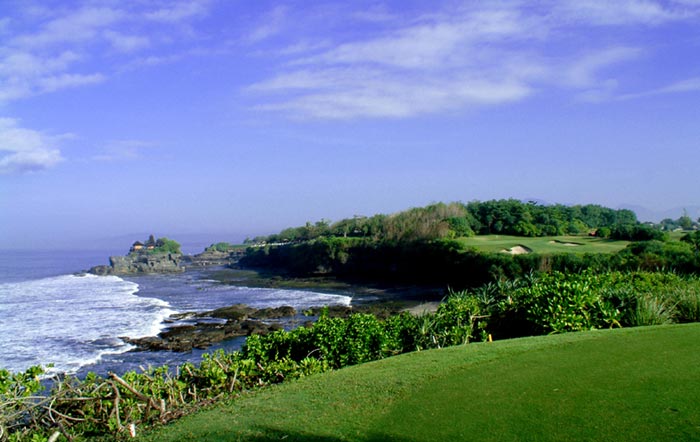 From the tee of the heroic one shot 7th.

Traveling golfers rarely get to know a course. It is generally one or two rounds, put a tick in the box and off they go to the next ‘must-play’ course. In a majority of cases, this is fine, given there really isn’t much to get to know.

However, Nirwana Bali Golf Course, located forty minutes from the Denpesar Airport on the south west side of the island of Bali, warrants more study. Greg Norman’s golf design team, headed by Bob Harrison in Asia Pacific, built a highly strategic course. There is an advantage (sometimes more subtle than others) to be gained on virtually every hole, whether it is a better angle to the green, a level stance, a shorter club in, etc. These options deserve to be understood and appreciated. Fortunately, given Bali’s rather remote location, people tend to stay at least a week, if not more at the Nirwana Resort, and have time to get to know the course.

The fairway bunkering is superb and gives the golfer plenty to think about on most tees. The more the golfer challenges these bunkers, the more he is rewarded. For instance, on the 3rd hole, a stream and two deep greenside bunkers on the left of the green suggest the right side of the fairway would be optimal. This assessment is correct. However, there is also a bunker on the right hand side of the fairway that the golfer must confront in order to gain this optimal angle into the well-contoured green. The golfer faces similar decisions throughout the round.

In addition, the approach shots hold plenty of options. As is typical of a Norman/Harrison golf design course, rarely is there equal trouble on both sides of the green. For instance, on the 2nd hole, a creek and a bunker protect the left side of this par three green. However, there is no trouble to the right of the green and the natural slope of the ground is from right to left. The unsure player can aim to the right and use the land to propel the ball back toward the green.

The property contains quite a bit of movement. The architects capitalised and the terrain confronts the golfers in all manners. The golfer plays through valleys, over valleys, across rice paddies, over an inlet, across beaches, along cliff tops and past Balinese temples. There is not one remotely flat hole on the course. Most importantly, the inland holes features the most innovative design work. This work ties the whole course together nicely, which is no mean feat given the spectacular cliff holes.

Level stances in the fairways are highly desirable yet often elusive. In general, the golfer needs to take on the trouble in order to gain the best stance. For instance, on the 10th, the hole gradually bends to the right. On the inside of the dogleg is a stream and jungle. Also, however, the right side of the fairway offers the more level stances. The golfer who gambles in going for this par five green in two well appreciates the benefit of a level stance. Otherwise, his ball is more likely to end up in a stream, ala the 13th at Augusta National.

The balance of the course is admirable. Both nines feature several holes that play along and over the ocean. The routing twists and turns in all directions; the golfer is forever trying to gage the wind direction. Only after playing the cliff top 14th hole do a couple of the holes run in the same board direction as the golfer heads for home.

Nirwana Bali Golf Course challenges the best player yet is flexible enough to accommodate the different playing levels that any resort attracts. This flexibility is exemplified in the long par fours. The fairways on the long par fours (the 4th, 5th, 15th, and 16th) holes are relatively wide and encourage golfers of all abilities to give it a good thump. The approach shots become exacting. However, the average golfer is given plenty of room seventy yards short of these greens to lay up and wedge on for a bogey. The more accomplished golfer will need to be exact with his long iron approach shots if par is to be secured. Both level golfers will be rewarded by sound judgement.

1st hole, 385 yards; You could only be in Bali. Seven rows of staggered rice paddies fall down the hill toward your left. Three immense bunkers guard the inside of this dogleg. A three wood leaves the golfer at the crest of the hill looking down toward the green. The green is a most appealing target, nestled below the golfer against the jungle backdrop. The golfer immediately should appreciate that flying the ball all the way onto the green is not always required; in this case, shots front and right will tend to kick onto the green as well. 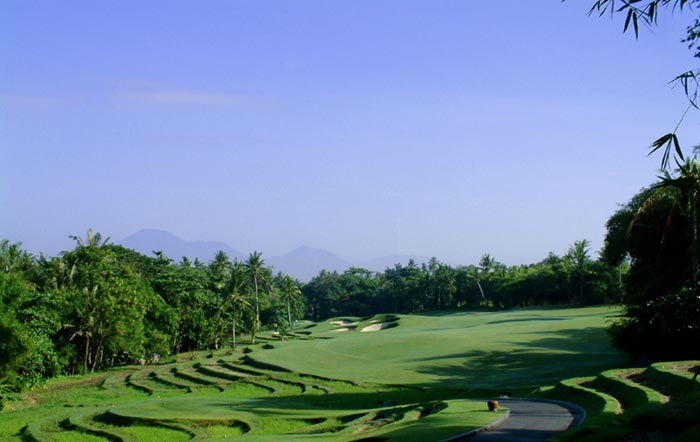 The opening tee shot needs to stay to the right of the rice paddies and the deep cluster of bunkers on the inside of the dogleg.

4th hole, 440 yards; The fourth hole has no fairway bunkers, which is merciful given the second is the most exacting on the course. Three dramatic fifteen foot bunkers confront the golfer short and down the right hand side of the green. The green itself is perched up on top of a hill and is narrow but quite deep with a distinct ridge running through it. Most players try to steer to the left, away from the bunkers; however they find themselves in a three foot swale that runs the length of the green. The resulting pitch shot to the narrow green is ticklish, to say the least. 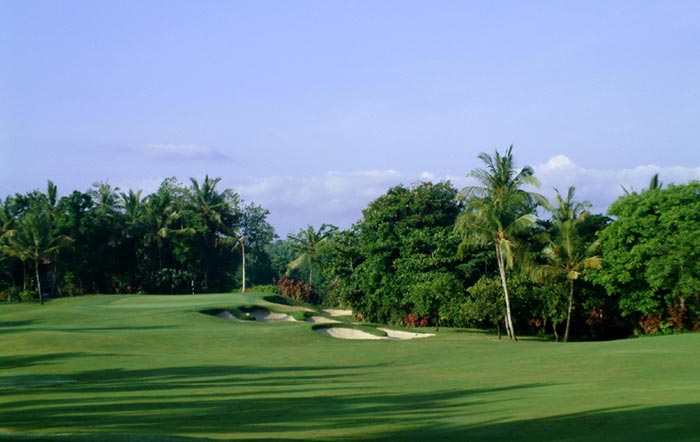 The exacting approach to the fourth.

5th hole, 440 yards; A great example of big long hole with plenty of strategic interest. The hole plays across two valleys; first on the tee shot, then on the approach. Again, the fairway bunkers on the left must be taken on to open up the green, which is bunkered front right. The green sits a top a hill and is mammothly broad. In keeping with the scale of the hole, the sole green side bunker is proportionately huge as well. Given the scale of the hole and its green complex, any one of a host of approach shots can be attempted, from a running hook to a high fade. 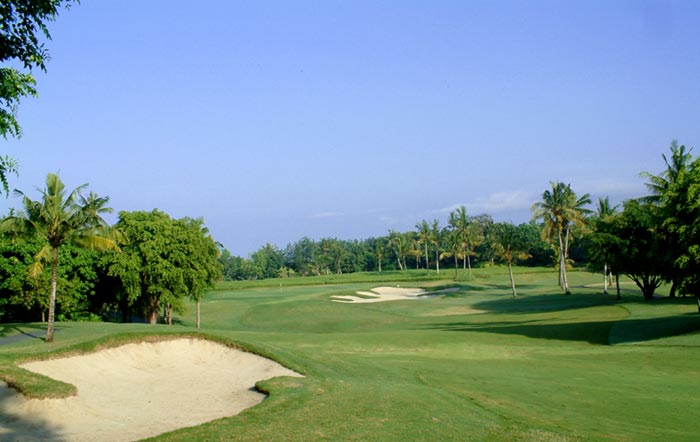 The long fifth from the left side of the fairway.

7th hole, 185 yards; Second only to the 16th at Cypress Point for the ‘wow’ factor, the golfer plays back inland across a beach to a green site perched on top of a cliff that is slightly taller than the cliff by the 8th hole green at Pebble Beach. Two hundreds yards further down the coastline is a temple perched on its own rock outcropping in the ocean. No description will do the hole justice.One of the great holes in the world that few golfers have even heard of.

12th hole, 380 yards; This exacting par four is in its own little valley as it heads straight for the ocean before doglegging to the right. Judgment of the wind becomes crucial as a river fronts the entire green. The short iron approach is played from a sloping lie, never the easiest of shots. Furthermore, the green sets on a rock shelf and is severely pitched from back to front. A ‘safe’ shot long is generally the start of a bogey or worse. The exactness of the approach is in proportion with the length of the hole. 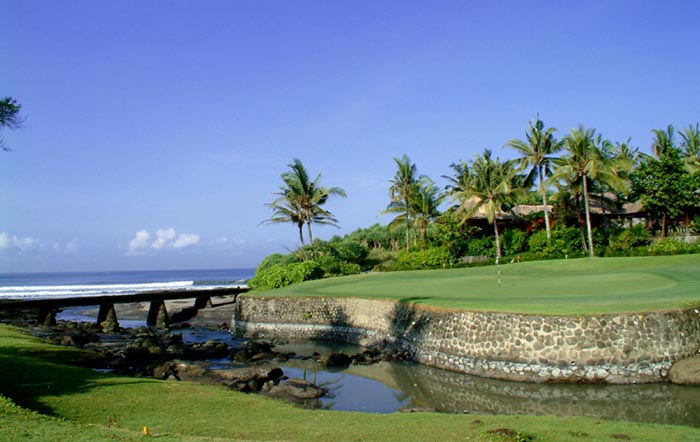 Best not to miss short on the tricky 12th hole.

13th hole, 335 yards; A beauty of a short two shotter played along a cliff top with the ocean on the right. Some days under favorable wind conditions, the green is reachable from the tee. However, the key shot is generally the approach shot. The elongated green is set parallel with the cliff and thus seems narrow. The further inland the golfer drives, the approach shot becomes more angled toward the green. This unsettling feeling is compounded by the fact that the prevailing wind blows across the golfer at a 45-degree angle as well. The wedge shot to the green set on a precipice is one that the golfer never tires of playing. 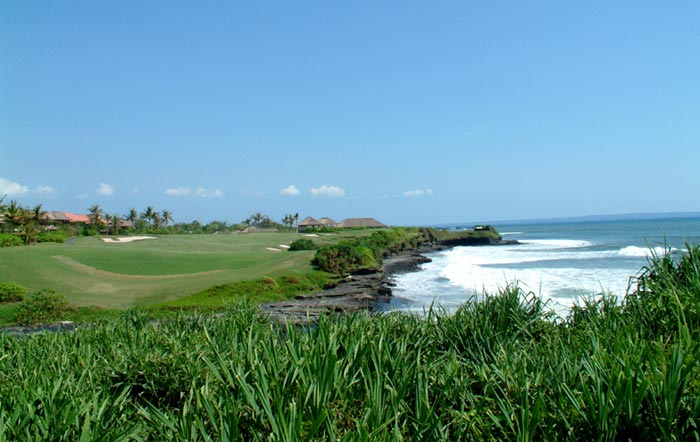 The direct carry to the green (which is directly behind the furthest bunker on the right) is 290 yards, and may be in reach downwind.

14th hole, 185 yards; The exact opposite of the 7th hole in two respects. First, the ocean is on the golfer’s right this time as he crosses the beach to another cliff top green. More importantly, this hole, unlike the 7th hole, plays significantly easier than it looks. The green is angled from right to left, i.e. it is angled away from the more serious trouble. Therefore, the golfer who bails out to the left is actually faced with a straightforward pitch shot back into the slope. Par can readily be saved. Compare this with the 8th hole at Pebble Beach. (It should be noted that the golfer may well go from a state of euphoria to anguish as the two toughest par holes follow). 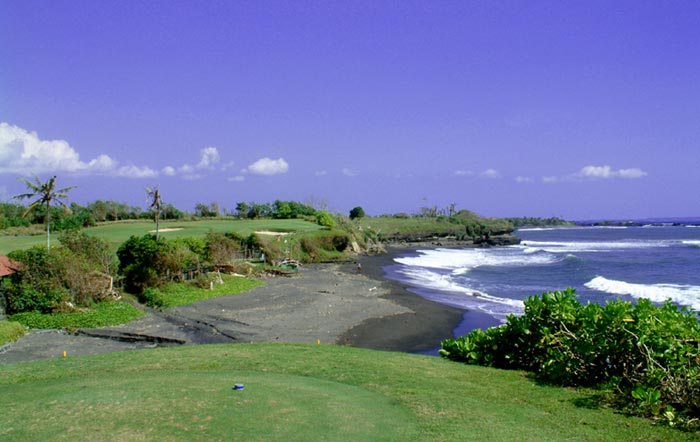 Management has changed the order of the holes from the architect’s original sequencing. The present 4th was originally the 18th. The two holes have been switched. As usual, the result is less than desirable. The golfer now faces a stream directly in front of a green on each of the last three holes. Furthermore, the last two holes feature 100 yard approach shots. This is an unfortunate ending for a course that offers variety at every other turn.

Many people tire of playing the same course over a period of a week or two. The same cannot be said of Nirwana Bali. The golfer will confront the course in a wide variety of weather and wind conditions over his one or two week stay. Regardless, the design subtleties will be more fully appreciated the longer the golfer gets to know the course. Who knows – by the end of his vacation, he may even play to his handicap! 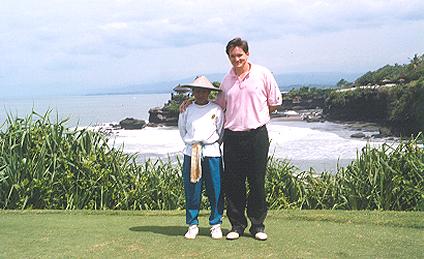 The author and his caddie (the caddie is on the left).