The Moonah Course at The National Golf Club
Victoria, Australia

The expansive vista behind the eighth green.

Every armchair architect has a clear picture of the property that his dream course would reside on. For most of us, it would be by the sea and would be exposed to the elements, to change the way the course plays from day to day. The course would also have plenty of movement as it randomly tumbles across dunes.

Ah yes, that would indeed have all the ingredients for an inspiring course. But is there such a thing as too much movement in the topography? As too extreme weather? When golf becomes more a matter of survival than interest? Of course there is, and very few modern courses over dramatic terrain successfully find what MacKenzie referred to as ‘pleasurable challenge.’

The Moonah Course is set amongst large rolling sand dunes some two thousand meters from the Pacific Ocean. Other than the distinctive gnarled Moonah trees, which dot the landscape, it is a pure dunesland setting. However, the large scale of the dunes means broad slopes and forced carries, never an ideal situation for any architect. Furthermore, the wind blows equally strong from the northeast in the winter and the southwest in the summer. Designing a course with both extreme terrain and weather considerations is never easy, yet everyone associated with the project felt that there was indeed an inspiring course buried somewhere amongst this 250 acres of rolling dunes. The key was just to find. 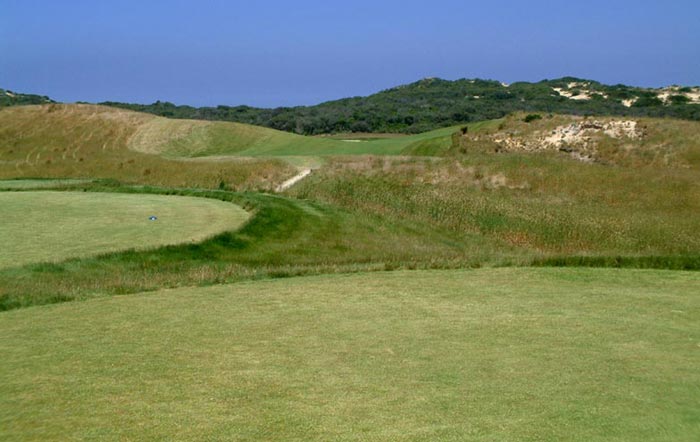 Bob Harrison, the head of the Greg Norman Design Team for Australasia, spent over 700 hours playing with countless iterations, one of which in fact allowed for a cross over. While this was another Prairie Dunes or Sand Hills situation in that numerous holes could be found, invariably any routing would yield a less than ideal hole or two, given such wild topography. (See 14 at Ballybunion, or four at The European Club or two at County Sligo as examples of holes you just have to put up with). However, the final routing that Bob and Greg Norman selected is remarkable in that there isn’t a single awkward hole among the bunch.

A lot of work then went into giving each hole plenty of elasticity so that it would play equally well in each of the two season’s opposite winds. Take the 15th hole for example. This 545 yard three shotter plays from an elevated tee to a 60 yard fairway some 50 yards below and has a reverse ‘S’ shape to it. The green itself is tucked up and around the corner past a large dune that runs down the left hand side of the fairway. Downwind, the golfer can shorten the hole by hugging the left of the fairway. He may then attempt to carry this dune and bound his ball onto the green, which is open in front to accommodate the shot from that angle.

Conversely, into the wind, the width in the fairway is required to just give the member a reasonable chance of hitting it from the exposed elevated tee. The second shot into the wind is no longer over the dune but straight ahead and once again there is ample fairway. However, there always is a preferred spot. Too far down the fairway and out to the right (where there is heaps of room), the golfer is not only making the third shot longer but he has left himself with a carry over two very deep greenside bunkers. He is best to try and stay left and reasonably close to the dune if he wants a clear shot down the green.

Downwind, the 15th hole is a great risk reward opportunity with a thrilling second over a dune to a green that was angled to receive that very shot, leaving the golfer with a potential eagle putt. Into the wind, the hole requires three well thought out and executed shots. In either wind condition, the hole is a gem. This elasticity is evident throughout the course and was a supreme achievement given the undulating topography.

Another point worth noting is the variety of backdrops behind each green site. Consider the backdrops of the one shot holes: the fifth green is uphill with only the horizon behind; the elongated eighth green is framed by the rolling sand dunes in the distant paddock; the 13th is a blind green with a dune directly behind it; and the 17th seats down in its own protected amphitheatre surrounded by Moonah trees. This appealing variety is indicative of the rest of the course.

2nd hole, 525 yards; An unusual hole for the course in that the fairway is essentially flat. The architects wisely took advantage of the opportunity to create multiple routings by the use of cross and diagonal bunkers. Elsewhere on the property, the land was of such scale (more like Ballybunion than St. Andrews) as to preclude such multiple routings. 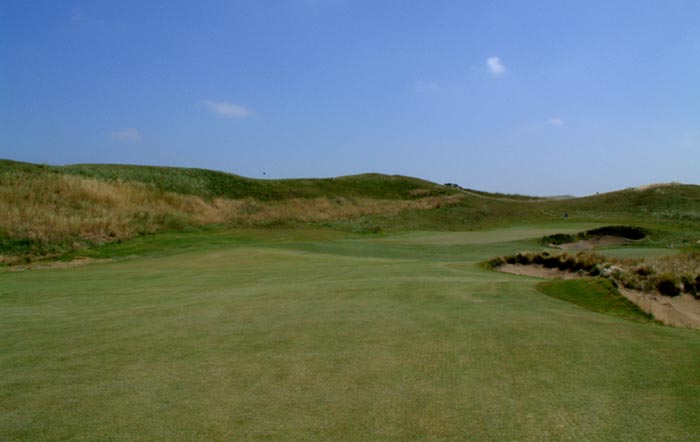 The approach to the second green.

3rd hole, 430 yards; The fairway has a spine running at a 45 degree angle and separates the fairway into two distinct bowls. The green is completely visible from the left hand bowl and is tucked into its own natural amphitheatre. Given the hole’s length, the green was left bunkerless and the hillside to the left will channel the ball onto the green. In fact, the best way for the golfer to approach the back left shelf on this green (one of the best hole locations on the course) is to use this tightly mown hillside to his advantage. The closely mown banks around some the greens provide plenty of short game variety. 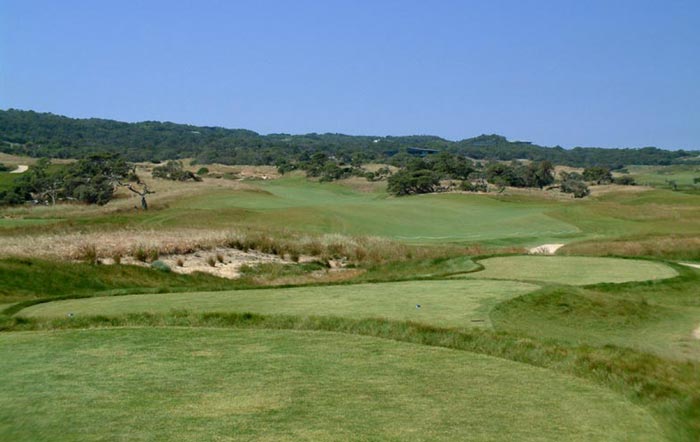 4th hole, 440 yards; Even though the hole is over a tumbling landscape, there is a preferred position off the tee, namely the far right hand side of the fairway which (1) offers a flat lie while (2) opening up the length of the green, which is tightly bunkered on its left side. 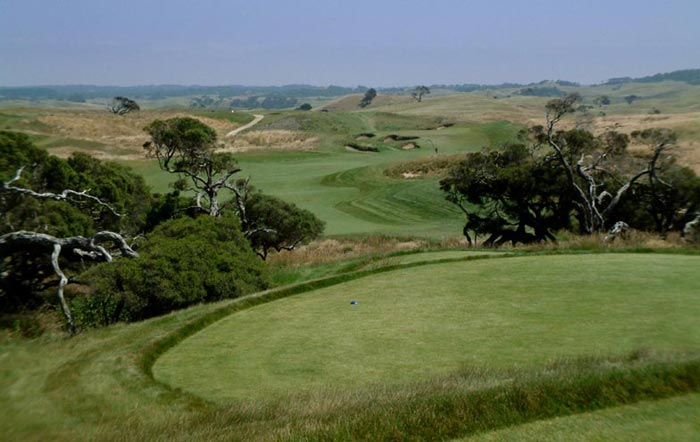 5th hole, 165 yards; It took real vision to find this hole as it lies along the ridge of a sand dune. The green site is the high point on the outward nine so don’t look for any favors from the wind. The green is canted so as to receive the controlled lower tee ball.

9th hole, 370 yards; The fairway is quite broad (51 yards across) for a hole of this modest length but once again the thinking golfer will seek the right hand side of the fairway as it is more level and opens up the length of the green. Given the windy playing conditions, the challenge will be in controlling his ball flight with his remaining short iron approach to the well defended green. 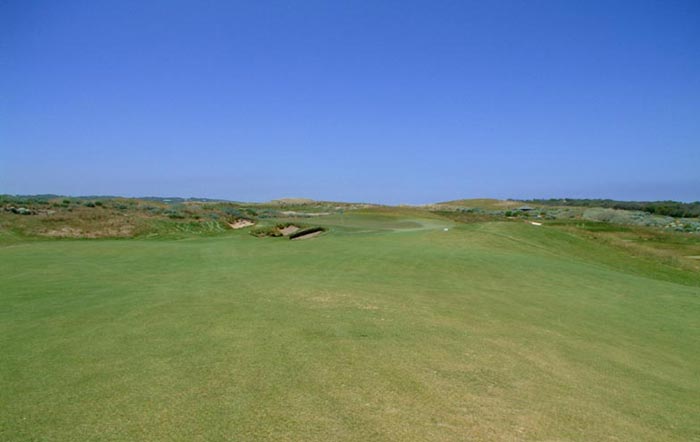 The flatter right side of the fairway is ideal, as it opens up the ninth green.

10th hole, 400 yards; This hole will appeal to many golfers in part because of its charm and in part because of its lack of difficulty. The 40 year old windmill was luckily preserved during construction – the crew was erroneously making plans to tear it down until the architect stopped them. The sloping green gives this hole its real value and a back right hole location can only best be accessed by once again using the tightly mown areas around the green to funnel the ball back onto the green. 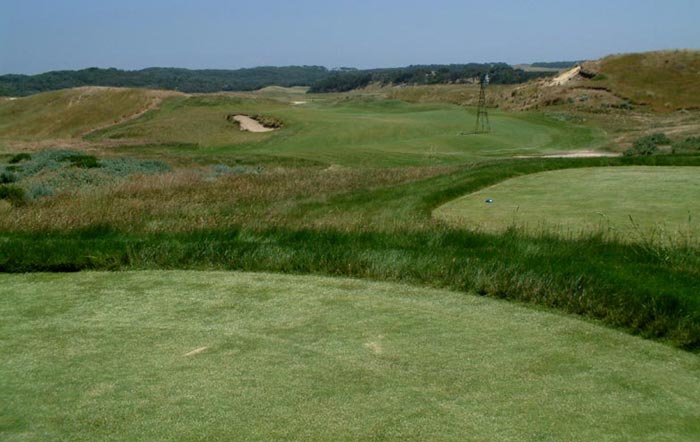 The charming 10th complete with windmill.

11th hole, 350 yards; Tucked in the far south east corner of the property, this hole is the Bob Harrison’s favorite, in part because it occupies the most spectacular spot on the course. Mountainous 200 foot dunes frame beyond the hole and the drive is a thriller and it must slot between two sand dunes. Once successfully accomplished, the approach is to an imaginative punchbowl green complex. 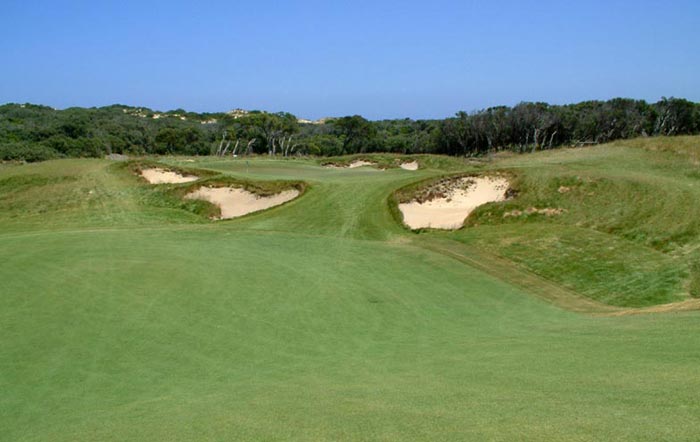 12th hole, 565 yards; The drive is the only completely blind one on the course but the real challenge comes with the next two shots. The hole doglegs to the right around rough ground at the 360 yard mark. The golfer is thus given a ‘bite off as much as you dare’ diagonal shot over scrub and bunkers. The green seats atop a sand dune and a string of mean bunkers down the right hand side of the dune come back to the golfer. So yes, while the golfer appreciates he would like as short a club in, he is best not to get too greedy. This kind of diagonal hazard seems curiously missing from UK courses and gives this dunesland course something unique: a thrilling second shot on a genuine three shot hole. 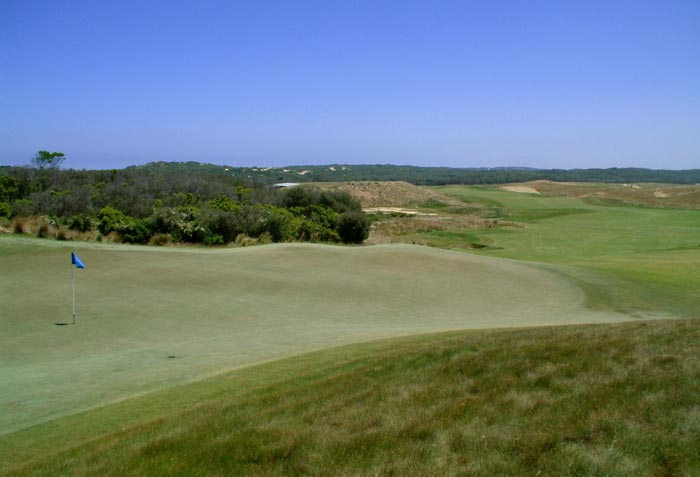 Looking back on the long 12th hole.

It should be noted the finishing three holes are very strong indeed and require stout hitting. When coupled with all that has gone before them, don’t be surprised if this course is used as a prominent tournament venue in the years to come.

The low marker will find a thorough test, yet one that allows him to display his abilities as opposed to mask them. The holes will play well in part because a CT2 Bermuda (known as GN1 in the United States) was used on the fairways. Though it allows plenty of run, it also will hold the ball better than the fine fescue normally employed on a links. A fescue grass over these kinds of pronounced slopes would have turned ridiculous in the hot Australian summer with parched fairways and a howling wind. The grass selected best suites the site and allows the course to play as it was intended.

While the site is indeed exhilarating, the severe topography and the windy conditions prevalent along the southern bottom of Australia could have lent themselves to yield a course of overwhelming difficulty, especially to The National’s average club member. Instead, the Norman Design Team found an ideal routing and instilled in each hole the elasticity to give the members a challenge they will never tire of for years to come, a sure sign of a truly engaging course.