Additions or fundamental changes to courses rarely work well. The new holes invariably look out of place and never quite fit with the original ones. The most noted examples of such failed efforts were routinely found around the turn of this century at several of America’s historic championship courses. Meanwhile, Lundin Golf Club offers an infrequent example whereby two different architects contributed holes over a 40 year period and yet the cumulative eighteen holes represent compatible design styles and principles.

How did Old Tom Morris come to design nine holes here in 1868 and James Braid an additional nine forty years later? In 1868, Leven Club had Morris extend their links east from the Mile Dyke. That same year, Lundin Golf Club was founded some 3,000 yards up the coastline. Play commenced at both ends over the shared links holes and this arrangement proved satisfactory for the members of both clubs. The shared eighteen holes were situated across genuine crumpled links land and fit snugly across a 200 yard wide strip of land between Largo Bay and a rail line. 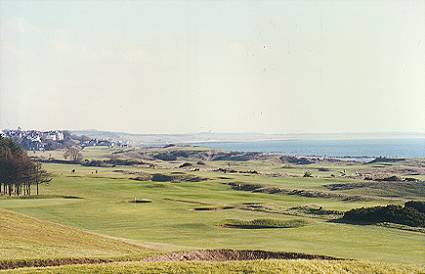 One of golf’s finest views is from the fourteenth tee at Lundin.

Yet, golf was rapidly growing in popularity and by 1907, Leven had 1000 members and Lundin had 400. The resulting congestion was too much for one course to handle and Lundin sought additional land. With no more room on the bay side of the railway line, they acquired the land to the north (away from the Firth). Lundin then approached Braid, who in 1908 created  a new nine holes. Essentially, Braid added today’s sixth through fourteenth holes, while keeping the first five and last four holes from Morris’s work. Indeed, Braid left the first, second, third, seventeenth and eighteenth entirely as Morris designed them.

Hiring Braid proved wise. Not only had he grown up in Elie, just four miles away, but crucially, he appreciated Morris’s work and shared similar design beliefs. The property upon which Braid worked resembles a right-angled triangle, starting a mere 50 yards in width by the clubhouse before expanding to nearly 500 yards at the far end. Several shared fairways exist, generally a fine idea where land tightens. The playing corridors are broad but straight, running parallel with both the shoreline and defunct rail line. No genuine option existed for the creation doglegs so playing angles were instilled within the hole confines. 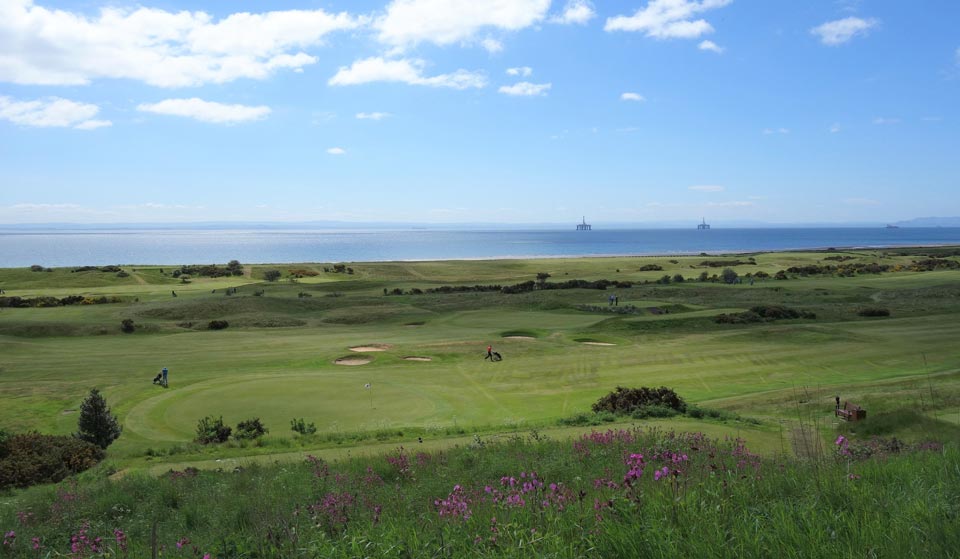 The configuration of the land dictated that parallel playing corridors would ensue. However, while this elevated view captures happy golfers bustling about with their trolleys, it also flattens the perception of the land movement. 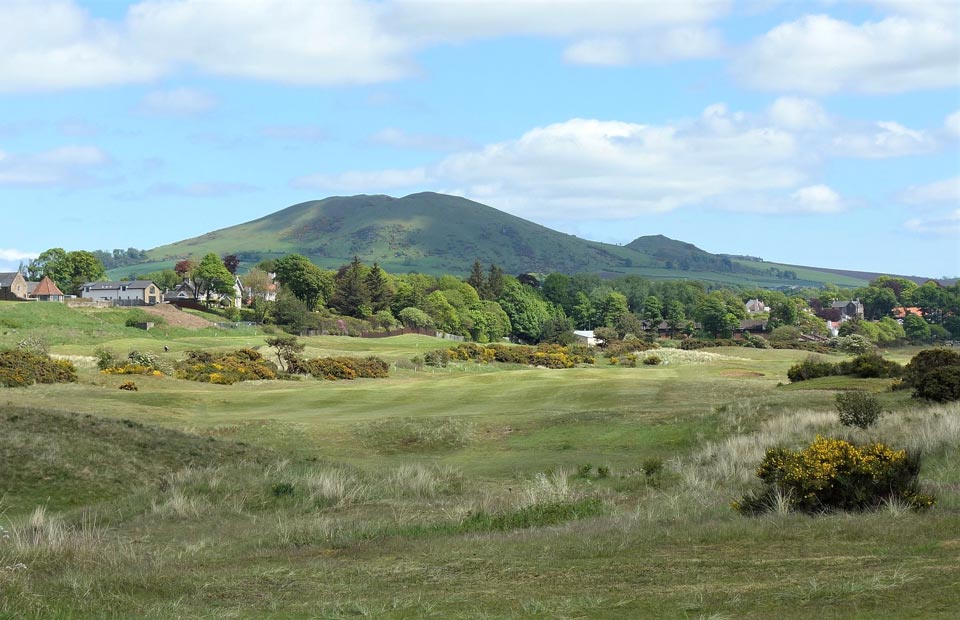 This view down the 15th better highlights the crumpled ground that many of the fairways enjoy. No bull dozer has ever hit these landforms. 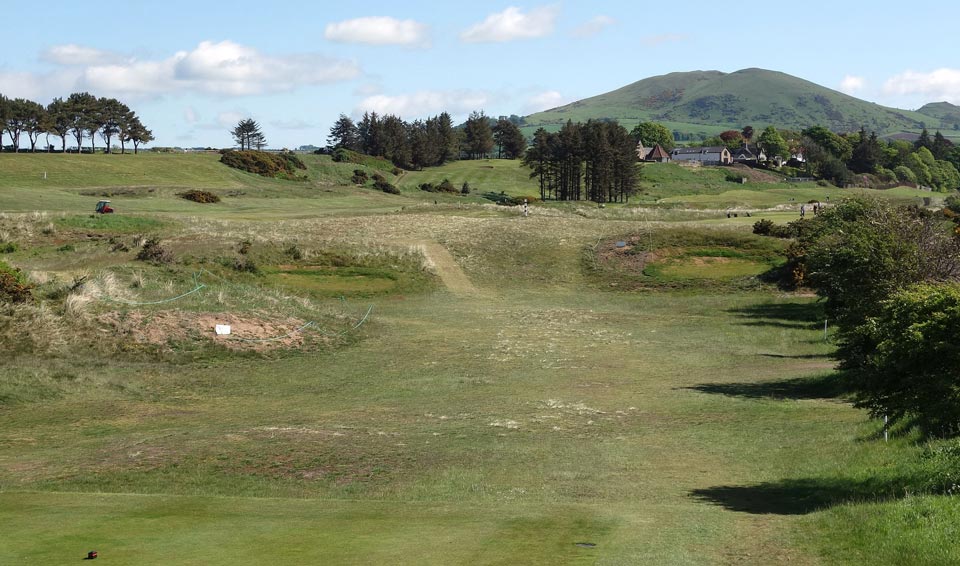 The sixth is Braid’s first original hole and its blind drive over broken ground indicates he wasn’t going to stray from what Morris likely would have done if he had had to build holes on the other side of the rail line.

Apart from holes twelve and thirteen that occupy high ground and are parkland in nature, the Morris and Braid holes effortlessly mesh together. Both architects were comfortable with forced carries over broken ground, incorporating the railroad embankment where possible, and the use of dykes slashing across fairways. The natural green sites are another unifying theme, running the gamut from ones on plateaus like the first to those in amphitheaters like the eighteenth. Braid’s pot bunkers mimicked Morris’s, while simultaneously, both appreciated that grassy hollows made an up and down just as difficult as a formal bunker. 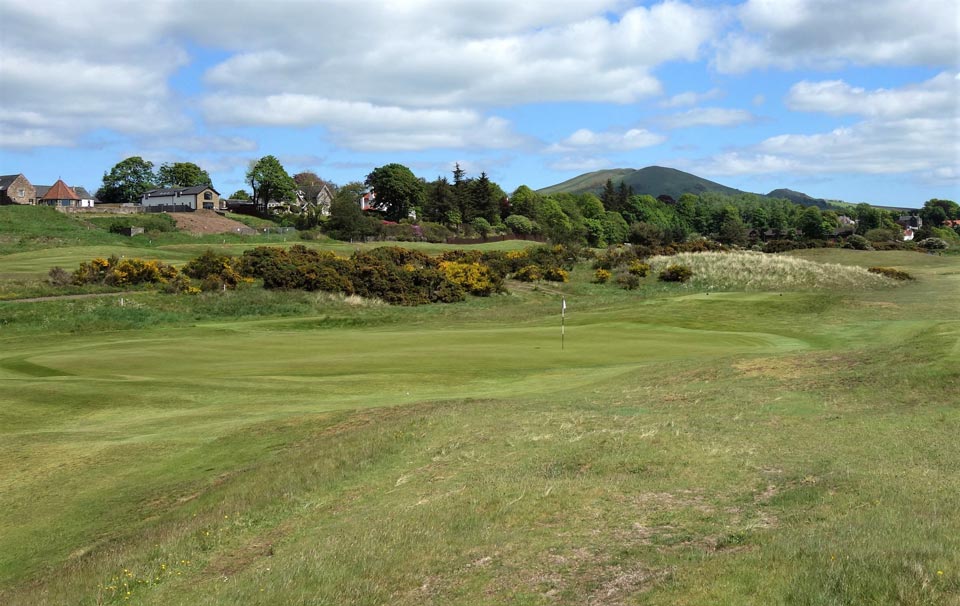 The 15th – a classic lay-of-the-land green that has stood the test of time. No greenside bunkers required.

Lundin Links stands today much as Braid left it, with only the third green having been moved 80 yards to the west in 1970. Though the prospects of hugging the coast and playing back and forth from the Lundin and Leven clubhouses is immensely appealing, the fact is that Lundin as it exists today is full of allure and stands on its own merits, as we see below.

First hole, 425 yards, High; What a rousing start! The putting green and the stand alone small professional shop are directly on the Bay’s edge. Eighty feet down is the shore. Sweeping views across the Largo Bay and the course inspire the player as he marches to the tee. The idyllic setting is straight from a Wodehouse novel. Appropriately named High as the tee and green are perched on plateaus that overlook Largo Bay, one need not wonder how Morris came up with the idea for the first and eighteenth to share fairway. The golfer has plenty of room for the day’s first swing, an attribute that seems imminently just and fair given the absence of a practice area. A nest of bunkers some 275 yards off the tee down the right create consternation downwind. 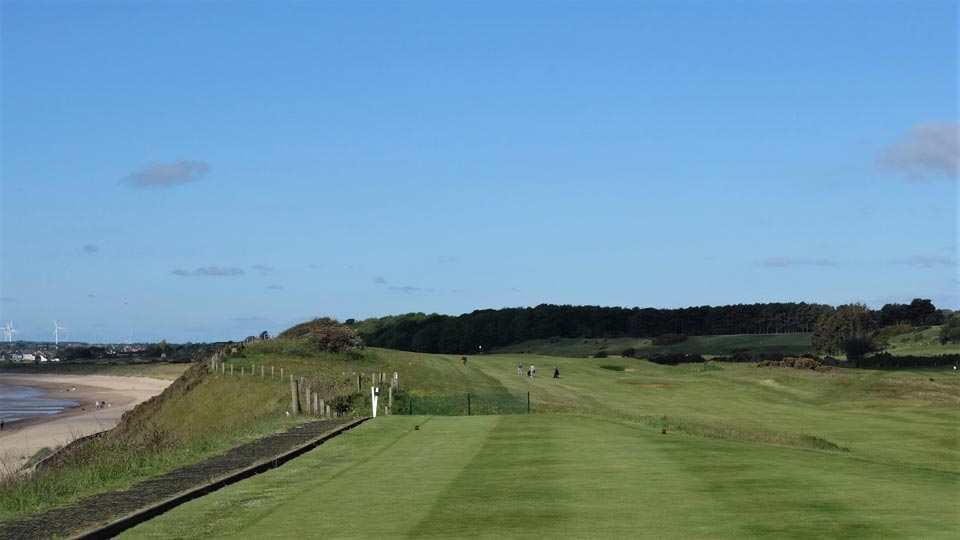 The view from the first tee. The next three holes play beside the beach as well.

Second hole, 345 yards, Quarry; Eight of the thirteen two shotters measure less than 370 yards. Depending on what you look for out of a game, that is cause to either rejoice or sniff. To the author, only the most joyless soul won’t delight in a hole like this one. The elevated tee provides a fine view of the lumpy fairway, as well as the burn that crosses the fairway at the 260 yard mark. A positional tee ball is required followed by a short iron. Straightforward enough but the lumpy fairway serves up dodgy stances and getting the pitch correct with the usual wind about provides ample gratification. 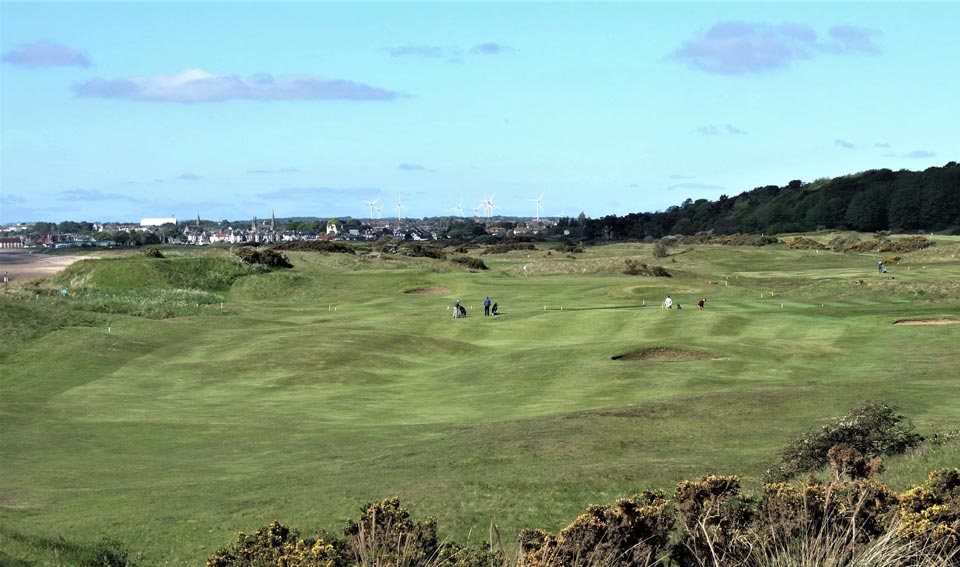 Length isn’t a key determinant in making the 2nd a delight to play.

Fourth hole, 450 yards, Miles Dyke; A mighty hole, played along the top of a dune. A burn cuts 30 yards in front of the green with the surrounding land sloping back into it, so the golfer needs to be well up with his approach shot. This hole routinely plays as a three shotter when the wind is against. 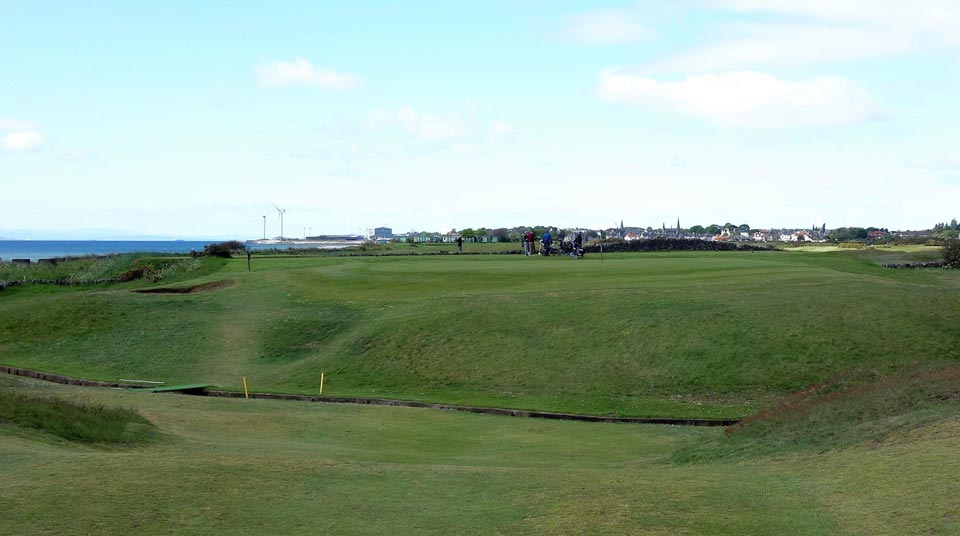 While the ball may initially carry the burn, that isn’t to say that it doesn’t eventually roll back in!

Fifth hole, 140 yards, Silverburn; A charmer, this short one shotter plays away from the water and as such, is the only shot the golfer will play that day in a northwesterly direction. The same burn from the prior hole snakes it way between the tee and green but Morris didn’t feel compelled to place the green tight against it. Rather, one of seven greenside bunkers is more likely to ensnare the golfer than the burn. Getting a read on the wind before hitting the lofted approach is key. 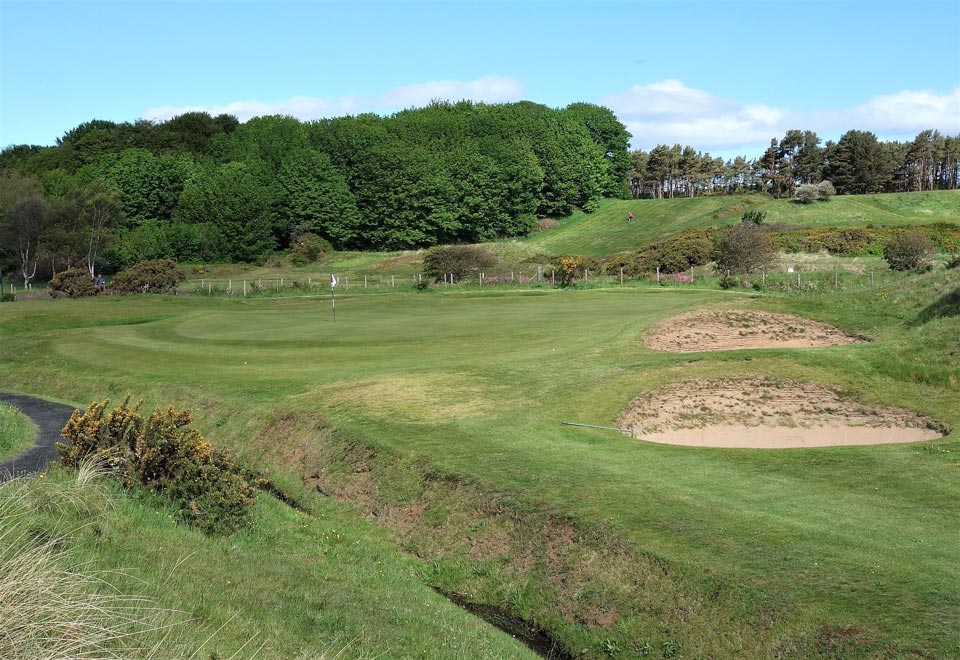 Losing a golf ball was surely just as irritating 150 years ago as it is today. Back then, it was also more expensive and the early architects didn’t build holes as to be so penal as to dissuade people from the fledgling sport. Case in point: Note how the putting surface is well removed from the burn even though the hole is short.

Eighth hole, 365 yards, Aithernie; The railway embankment and out of bounds run along the right of this two shotter. So what did Braid do? Cleverly, he angled the green to best accept shots from the right portion of the fairway.

Tenth hole, 350 yards, Thorn Tree; An interesting hole played to a shared fairway with the eleventh. The green enjoys its own natural amphitheater surrounded by gorse, grass hollows and five bunkers. The front right bunker is the largest on the course by far and features an ‘island’ of turf in its middle, which introduces all sorts of possible outcomes. Maybe your ball finishes in it where you have a good stance and lie – and maybe it doesn’t. Architect Gil Hanse is an admirer of this style bunker and features several at his nearby course at Crail, as well as at some of his other designs. 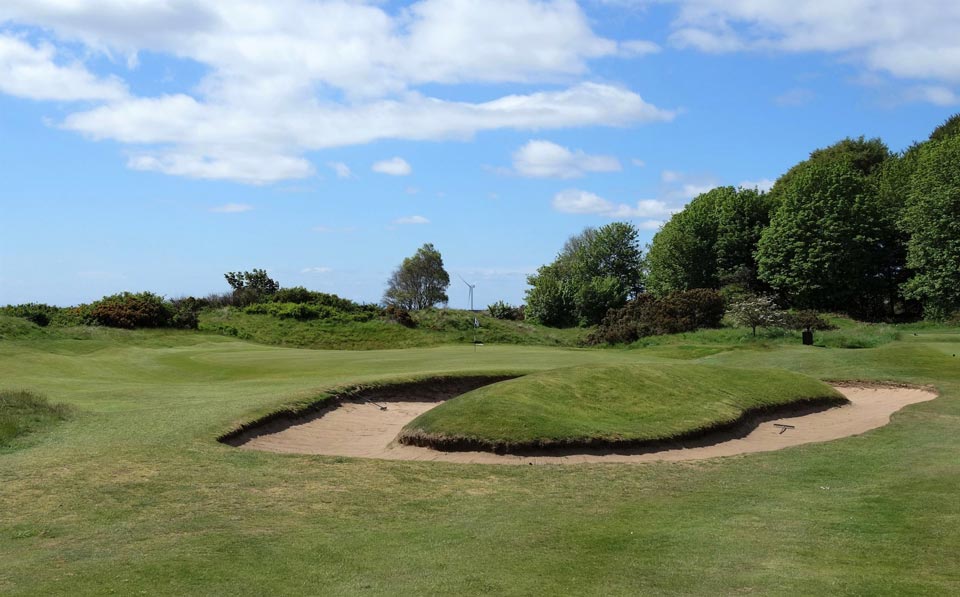 The infamous island bunker at 10.

Fourteenth hole, 175 yards, Perfection; The prior green is the highest point on the course and the prime benefit to the golfer for having scaled this high over the past few holes is derived here. Stunningly, every green can be seen from this vantage point, prompting some observers to place this among the finest views in golf. Indeed, rarely do golfers encounter such a downhill shot on a links course. With its necklace of bunkers, gorse and the perimeter wall along the right, the green appears smaller than it really is. Still, from the elevated tee on a windy day, the tee ball is a nervy one and only ‘perfection’ will do. 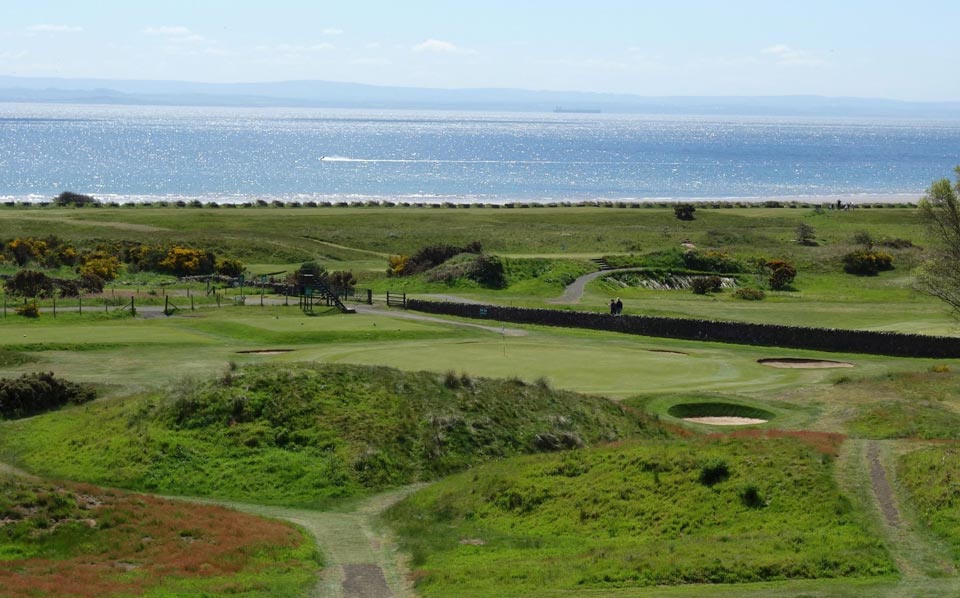 Short is definitely the miss and the knob in the foreground obscures how much short grass extends back from the green toward the tee.

Eighteenth hole, 440 yards, Home; A superlative hole, hard to fathom how this finisher isn’t universally lauded. All aspects of a golfer’s ability are taxed. First, he simply needs to be able to cover the distance in two blows. Second, the final approach shot is surely one of the most nerve-wracking in the sport as the entrance road (which is out of bounds) closely parallels the last ninety yards of the fairway. Finally, the putting surface offers no respite, as it is long, slender and falls over four feet from back to front. In wonderful Scottish fashion, the hole finishes underneath the clubhouse windows. 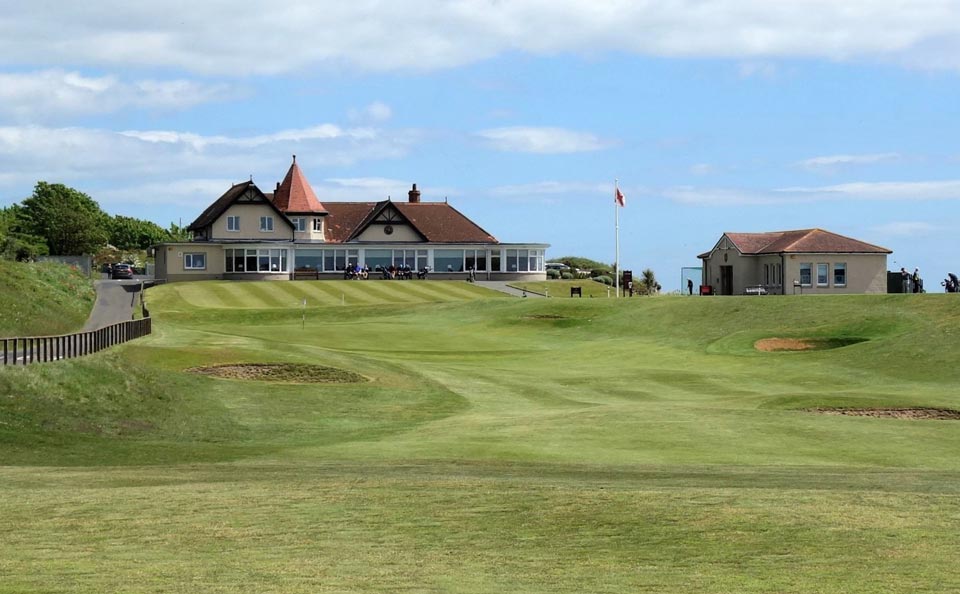 With out of bounds tight left, can the golfer use the short grass right to funnel a ball onto the putting surface? Even if successful, a slick, downhill putt might be the end result.

Word has to be made mention of the clubhouse, putting green and professional shop: their location is cumulatively ideal. The elevated clubhouse provides views over much of the course and Largo Bay.  Yet, the opening and closing holes aren’t dreadfully forced up some mountain either. The golf is great – and so are the clubhouse views. Generally, you have one or the other but Lundin pulls off both.

An irrigation system was installed in 1974, which invariably hurt the keenness of turf. Also, several bunkers like those found around the tabletop sixth green are no longer well integrated into the greenside slopes. They gather far fewer balls than they have in the past. Still, the course is an historic treasure and the Royal and Ancient uses it as a qualifying site for the Open. The fact that the well traveled Malcolm Campbell is a member here also speaks of its enduring charm.

Old Tom Morris designed a number of fine courses within an hour car drive of St. Andrews. The list includes Leven, Ladybank, Montrose, Crail, Elie, Panmure, and The New and Jubilee Courses. Yet, some well experienced golfers contend the best of the lot is his work here at Lundin. Holes like one, four and eighteen can be considered with the finest in the country and possess the attributes that Morris held in the highest regard. James Braid’s admirable additions expand on those themes and any student of architecture will appreciate spending time here.