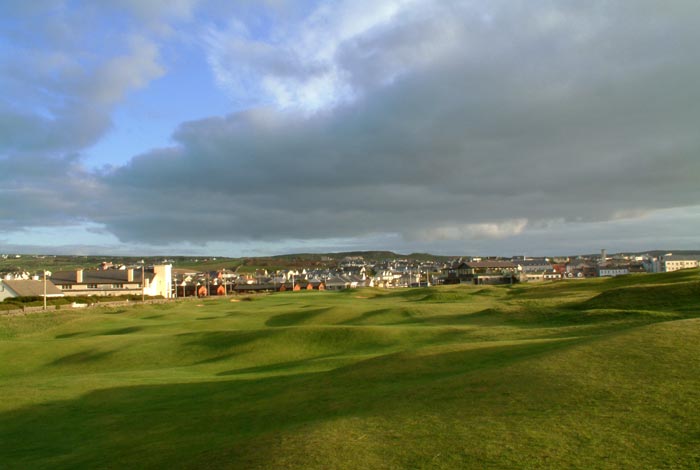 Try as he may, man will never be able to create the superb random movements seen above. Of all the great course’s in the world, nature may have given Lahinch the biggest head start.

Describe a dream landscape upon which to build a course. Would it have views of the ocean? Yes. How about big tumbling dunes? Yes. How about smaller, more rippling land on a human scale? Definitely, as such smaller contours provide for ideal golf qualities. Wind, low humidity for fast and firm turf and sandy soil are the final, absolute requirements.

As well as any course in the world, Lahinch captures all those elements and then some. Such a rarity but God truly did intend this to be a golf course. Even better, as Lahinch has evolved for well over a century, it also embodies quirky attributes that are almost totally missing from today’s comparatively vanilla golf architecture.

Lahinch’s blind shots to the famed Klondyke and Dell holes are certainly famous throughout the golfing world. Leveraging off these two unique green sites, the other greens complete one of the most impressive – and unconventional – sets of greens in the game. Its longest and toughest two shot holes frequently provide only shallow targets. For instance, on the third, sixth, tenth, and seventeenth holes, all tough long four pars even if the wind isn’t blowing, the golfer is given a green less than 30 yards deep that more times than not is on a knoll. In addition, two of the par three holes play to greens less than 20 yards (!) in depth. Given the wind, precise judgement of distance with one’s irons becomes a must.

Fortunately, the course is maintained in a manner that compliments the greens. The areas around the greens (for some ten yards out) is cut shorter than the fairway, emphasizing the slopes of the areas and giving the player the frustrating image of his ball actually picking up speed as it bumbles toward a bunker. Also, the banks around the greens are often mown to this height to allow a player some leeway with his approach to the small greens. On the fifth, for example, a ball that just rolls over the green will often roll up the bank and then back down onto the green, a nice gesture for a hole with a blind, small green.

Truthfully, no one architect can be given the majority of credit for what are indeed fascinating green sizes. Like most courses its age, Lahinch has seen plenty of change. Old Tom Morris laid out the original course in 1892 but such was the design that not long after in 1907, a relative nobody made significant changes. Still not satisfied, the Club brought Alister Mackenzie in to make dramatic changes in 1927. Unfortunately, little of MacKenzie’s work remains untouched. Two of his greens were lost to the Atlantic.

Similar to Royal Portrush, the course is blessed with a romantic setting. It is easy to go on and on about the towering dunes, the Atlantic Ocean on one side feeding into a broad estuary on another, the Castle ruin, wind and more wind, and of course the damn goats. However, like Portrush, Lahinch enjoys the finishing touches from architects that make both courses far more than just beauty pageants.

The green sites are at the heart of Lahinch. The first green high on a knob with a gathering bunker, the fourth behind the towering Klondyke dune with out of bounds right behind it, of course the Dell green, the sixth green down by the sea, the shelf-like ninth green, the eleventh tucked into the dunes, the thirteenth falling away on all sides. Just from reading the descriptions, the reader gains a sense of the immense variety contained within the course. One of the reasons? Convention has largely ignored here! The result? An excitement that seeing every fairway and the bottom of every flagstick never comes close to providing.

In some respects, Lahinch’s two most famous holes distract attention from Lahinch’s greatest attribute: the strength of her par fours, which are well spread across the entire course. The authors are hard pressed to come up with a better set of two shot holes. Other than perhaps the fifteenth hole, they all contain genuine appeal and tremendous variety. Thus, a direct result is that Lahinch maintains a challenge as current today as seventy years ago when MacKenzie uttered his (now worn out) statement regarding the merits of Lahinch.

Third hole, 445 yards; The start of one of golf’s great runs of holes, the stretch from the third through the fourteenth at Lahinch is as good as links golf offers. This fairway follows the shoreline on the left before running out some 300 yards from the tee. The golfer is left with an approach shot over broken ground to the first of Lahinch’s shallow greens that falls away on all sides.

Fourth hole, 475 yards; The Klondyke is one of the best par fives in a country not associated with good par fives, with an exhilarating tee shot followed by a classic links shot up and over a massive sand dune (interestingly enough the hole was originally a par four, before the green was moved well back). The real problem with the Klondyke hole is that the ‘U’ shaped fairway is chewed up by mid summer. Old Tom never envisaged the crush of golfers who now flock to Ireland. 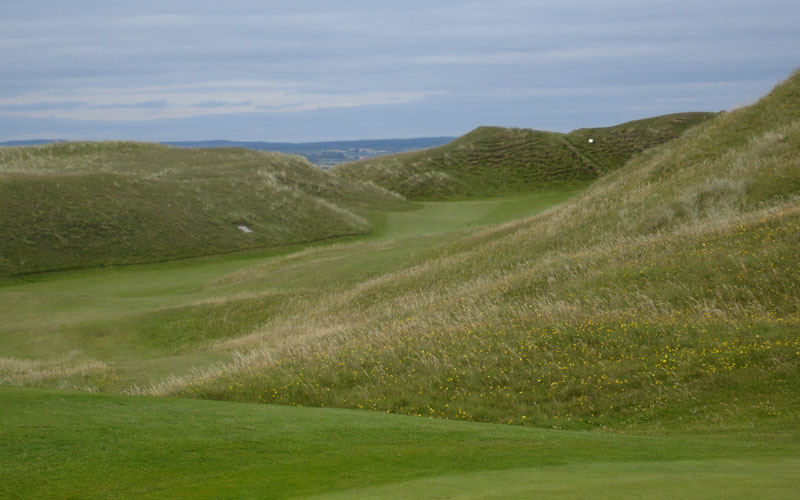 A view from the edge of the third green down the valley that comprises the fairway on the famed Klondyke hole. The white stone on the far dune acts as a directional marker.

Fifth hole, 155 yards; The real crime with the Dell hole would have been not to place a green in this natural depression. Everyone clamours for architects to follow nature’s lead – and that’s exactly what happened here in spades. No man could ever dream of designing such a one shot hole from scratch. One consequence is that the Dell hole’s uniqueness is as fresh today as it was one hundred years ago.

Sixth hole, 425 yards; A most attractive hole, this fairway heads straight for the Atlantic Ocean, then once past the crest of the hill it stops, similar to the third. Down below is the isolated green surrounded by several bunkers. Punching a low iron under the wind with the ocean as a back drop is satisfying indeed.

Ninth hole, 400yards; The elevated tee is the highest spot on the course, a glorious spot not to be in a rush as there are sweeping views in all directions. The right to left tilt of the fairway makes it both hard to hold and provides an awkward stance for one’s approach. Mackenzie’s long narrow shelf green is a full 56 yards deep, making it one of the longest in links golf. 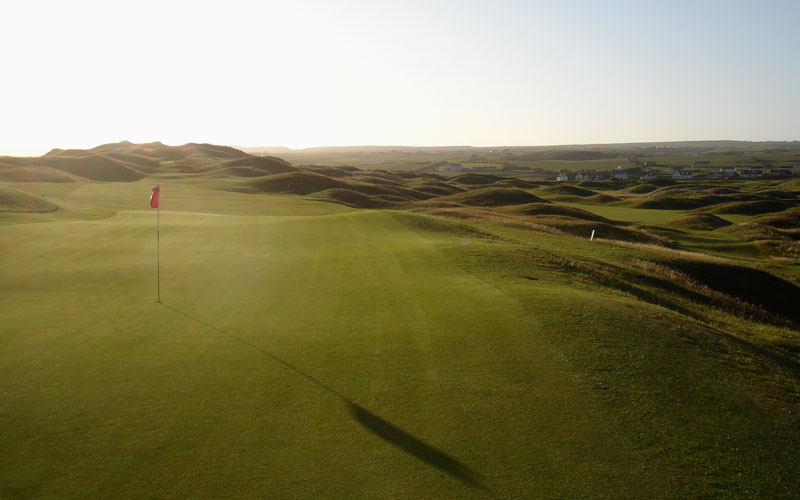 Looking back down the long ninth green to the elevated tee perched in the far dunes.

Eleventh hole, 170 yards; One of golf’s finest green sites and one of only three original MacKenzie greens that remain. The small green is tucked into the dunes at the mouth of the estuary and the Atlantic Ocean and deserves the attention that The Dell hole routinely receives.

Thirteenth hole, 280 yards; The stewards of Lahinch Golf Club deserve credit for all kinds of reasons. Lesser men would have at some point caved in to modern thoughts on architecture and such holes as Klondyke and Dell could have easily been gone forever. Also, here at the thirteenth, no telling how many people have suggested in the past ways to ‘improve’ this hole, either by finding more length or by changing it into a one shotter or other such ill conceived suggestions. As it is, with the natural bowl depression gobbling up any slightly pushed tee ball and its long three tiered green creating short game headaches, the hole is a perfect half par hole, the sort so admired by Mackenzie.

Fourteenth hole, 460 yards; When blessed with such a dunescape, the architect’s one obligation should be to create as much variety as possible by utilizing the dunes in every conceivable manner throughout their routing. Such is the case here with holes through valleys, fairways that run out, blind greens on the far side of large dunes and fairways along ridge lines. Another example of a well routed hole is at the fourteenth whereby the golfer is made to play between two large dunes that are sixty yards shy of the bunkerless Mackenzie green. Successfully hitting through the gap makes a very satisfying approach.

If ever you want to know just how invigorating golf can be, go to Lahinch but bring your ‘A’ game. The famous holes are the easy part.