What are a course’s merits? Certainly, one can argue thatconcentrating onthree areas makes as much sense as any other method, namely: setting, architectural merit, and the golfing appeal to a wide range of abilities. Jasper Park’s calling card would thus look like this:

Jasper appeals to the full range of golfers. Every green is open in the front (at least on one side like the 16th ) even though several are elevated. Many of the bunkers are placed well short of greens and deceive the first time visitor as the flashed up bunker faces appear to be greenside. The 4th , 5th, 9th, 10th, and 18th holes all have bunkers 20 to 60 yards short of their respective greens. On other holes, bunkers are five to seven paces off the edge of the medium size greens. The resulting bunker shots are the awkward, in-between kind of 10 to 25 yards.

Jasper enjoys a key attribute over Thompson’s other mountain masterpiece, Banff Springs, a three hour drive south: the course remains as Thompson designed it. The flow at Banff suffered when the new clubhouse dictated re-arranging the holes. Jasper remains a shining example of architectural artistry that compliments and even enhances the incomparable setting.

Second hole, 490 yards, Old Man; A stunner, the golfer is encouraged ‘to swing out and give it a go.’ The fairway is miles wide and is threatened only by a bunker at the 200 yard mark, which in the high altitude should be carried. The hole’s defense are two30 yard long beautiful Thompson bunkers, one starting 110 yards from the green and another just eight paces from the green. The large bunkers are in keeping with the grandness of the setting. There is a breathtaking view of the distant mountains, the silhouette of which looks like an old Indian chief lying down in peace. There is nothing cramped or cluttered about golf at Jasper. Note the outline of the Indian chief along the mountain top. 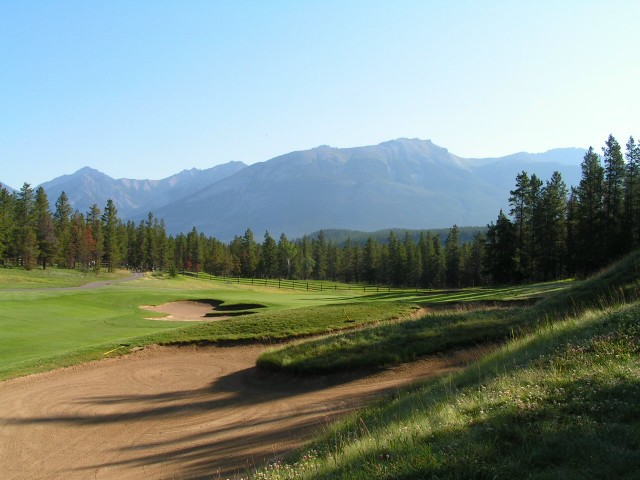 The sprawling bunkers are in keeping with the size of the place.

Third hole, 455 yards, Signal Dip; A blind dogleg to the right. The long hitter can challenge the inside of the dogleg and try to carry the trees. Watching the flight of the tee ball against the bank of trees on the far hill is most satisfying. Thompson perfectly benched the green complex into the hillside. As seen from the hillside that makes the tee ball blind, Thompson did a great job of benching the 3rd green complex into the natural hillside.

Fourth hole, 240 yards, Cavell; Unusual for a hole of this length, this superb long one shotter is visually most attractive, despite a poorly placed cart path. The tee shot is elevated and the distant green ringed by five bunkers is visible for all to see. Mercifully, the green is gathering and most putts tend to break toward the middle. Another 1/2 par hole, the type of which is much admired by the author. 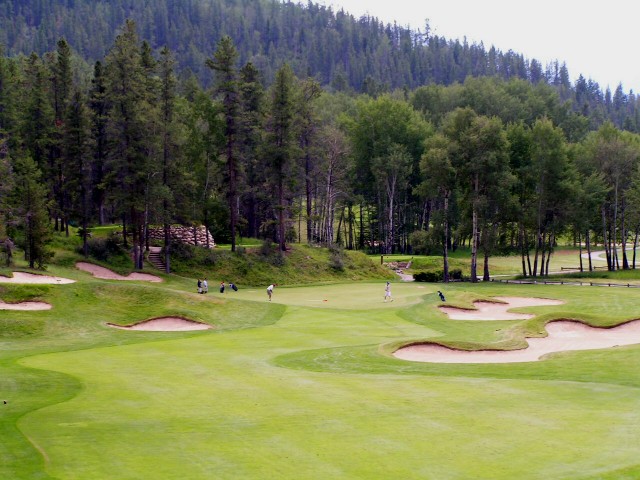 The one shot 4th required a driver in Thompson’s day. As with all the greens at Jasper, Thompson provided the player with the opportunity to run the ball onto the putting surface. Such a design attribute allows all skill sets of golfers to enjoy the course.

Fifth hole, 480 yards, Meitte; The concept that Jasper Park is ‘just’ great holiday golf is as criminal as saying the same about St. Enodoc and North Berwick. Take an excellent half par hole like the 5th with its central hazard and tightly guarded green. Though the tiger golfer using modern technology will have amid-iron into the green for his second shot, so what? Call it a par four and call Jasper Park a par 68 then if that makes the course more of a true test. Regardless of what par says, Jasper is full of very good to excellent holes and few courses can make the same claim. Call it whatever par one wishes, the well bunkered and strategically sound 5th is a very fine golf hole. The built-up bunkers that surround the back of the 5th green are meant to be reflective of the peaks of the distant mountains.

Eighth hole, 435 yards, Tekarra’s Cut; A brute of a hole, despite being bunkerless. The flag is invisible on any approach other than from a drive that finishes long and left down the fairway. Benching this fairway into the hillside was no mean feat and yet, once again, Thompson’s end result looks both natural and is blessed with very good golfing qualities. 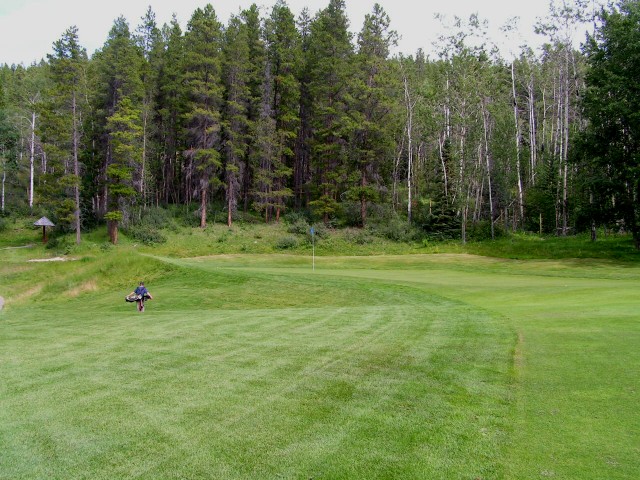 The uphill approach at the 8th is to a bunkerless, though well defended, green with its sharp drop-off to the left.

Ninth hole, 230 yards, Cleopatra; The author knows of no other nine in golf that possesses two 230 plus yarders as superlative as the two found on the front of Jasper Park. Regardless of the distance on the scorecard , the 9th play is considerably shorter as there is a 70 foot drop from tee to green. Thompson built a raised green complex on the valley floor surrounded by seven bunkers. As the green slopes predominately from front to back (i.e. in keeping with the slope of the surrounding land), the play is often to land the ball short of the putting surface and watch it chase onto the green. 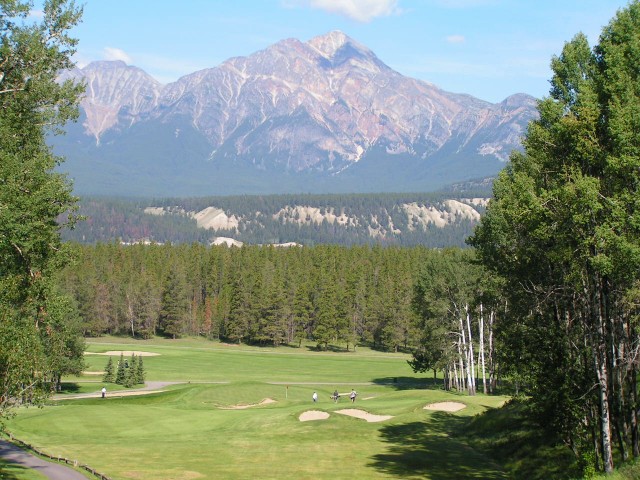 The two mounds that originally helped give this hole its name were replaced by Thompson with the right bunkers sixty yards short of the green. 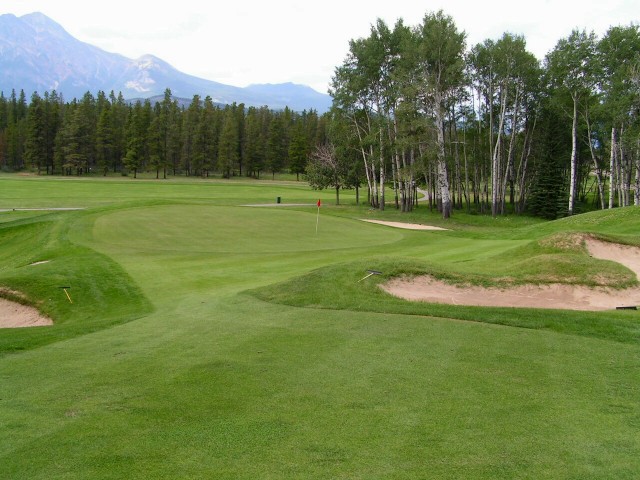 Upon closer inspection, the golfer finds that the fronting bunker is actually fifteen paces shy of the green. Thompson built up the green pad twelve feet off the valley floor, which means that a) a difficult recovery shot awaits any tee ball that is missed left, right or long and b) as the green is entirely manufactured and elevated from its surrounds, reading putts is tough.

Tenth hole, 490 yards, The Maze; A distinctively bunkered hole with the placement of the 11 bunkers and their configuration works of the art of manual labor.  The hole is aptly named ‘The Maze’ with the bunkers separating the flat 10th fairway from that of the flat 6th fairway. Though completely artificial and man-made, Thompson’s unique bunkers give both holes their distinctive character. Though Jasper enjoys much more consistently rolling topography than Banff, Thompson enthused the holes over the flatter portions of the property (i.e. the 5th, 6th, 10th, and11th holes) with the most bunkers. As seen from near the 10th tee, a maze of bunkers greets the golfer at the 10th.

Eleventh hole, 405 yards, Pyramid; The towering Pyramid Mountain in the far distance is the target for the tee shot. This undulating green is the most difficult on the course and is beautifully framed by six more of Thompson’s bunkers which are meant to replicate the mountain peaks in the background. It is worth noting that these artistic greenside bunkers weren’t part of the original design but were added during one of Thompson’s numerous return visits. The view from the 11th tee. 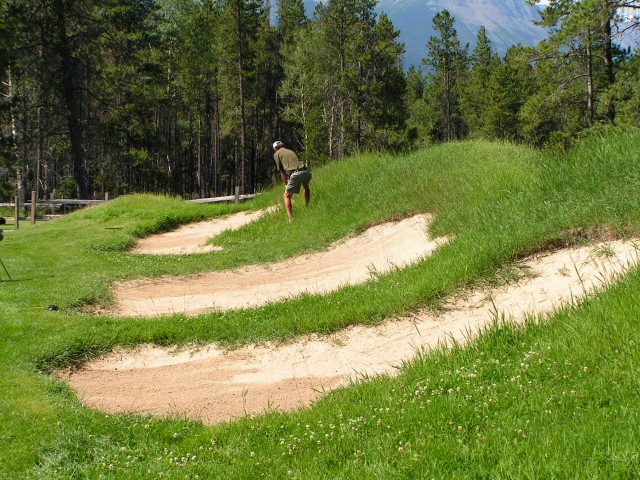 Thompson’s back greenside bunkers at the 11th. Perry Cooper does a sensational job of presenting the course in a manner consistent with the course’s rugged mountain setting.

Thirteenth hole, 605 yards, Grande  Allee; At the time the course opened in 1925, this was one of the handful of longest three shot holes ever conceived. Two perfect strikes with hickories were required just to leave the player with a blind mashie niblick approach to a sunken green. Modern technology has taken some of the sting out of the hole but every player delights in playing across such a tumbling landscape. 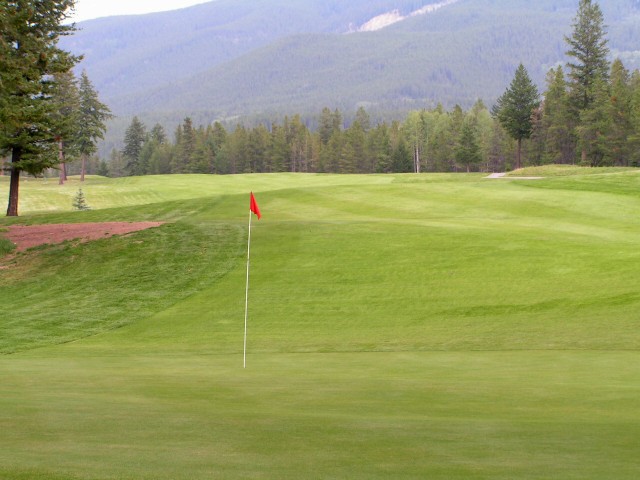 This view from behind the 13th captures the tumbling topography and the blind nature of the approach shot.

Fourteenth hole, 360 yards, Lac Beauvert; A hole of uncommon beauty, the Cape tee ball must carry Lac Beauvert to reach the banked right to left fairway. The green is bunkerless – as is the entire hole for that matter – but is well defended by the natural slope of the land. As at the 8th and 16th holes, where natural features abound, Thompson built no bunkers. Thompson takes the golfer on a journey at Jasper Park. The long 13th heads toward Lake Beauvert and the 14th tee just into the glacial lake. Surrounded by mountains, it is easy for the golfer’s mind to wander. 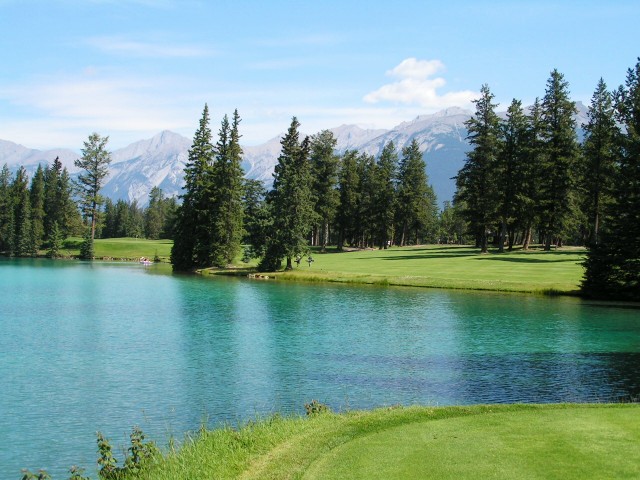 The tee ball on the 14th possesses the classic diagonal options of a Cape tee shot. 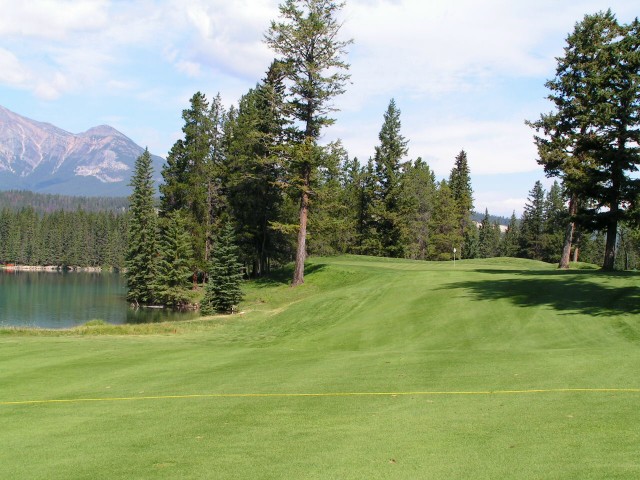 The approach to the elevated 14th green is often from a tricky sidehill stance. However, the closer the golfer challenges the lake with his tee ball, the more level the stance.

Fifteenth hole, 140 yards, The Bad Baby; One of the four finest short holes in the world, belonging in the group with the 7th at Pebble Beach, the 8th at Royal Troon, and the 6th at National Golf Links of America. The hole, aptly named, is a deceptive teaser thanks in part to the restorative work carried out to the course’s bunkers over the past decade. The back right bunker appears to be a genuine greenside bunker, flanking the right of the green. In fact, it is well back, past the back edge of the green. In 1995, the bunker didn’t exist in this spot were Thompson had designed it. Instead it was short right of the green where it created none of the visual trickery that it does today. The width of the green is a scant 14 yards and is located on a small knob. Any shot that misses the green will bound away and leave a delicate recovery shot (or two). The play is simply to aim for the middle of the green as regardless of where the hole is located, the resulting putt will be short. 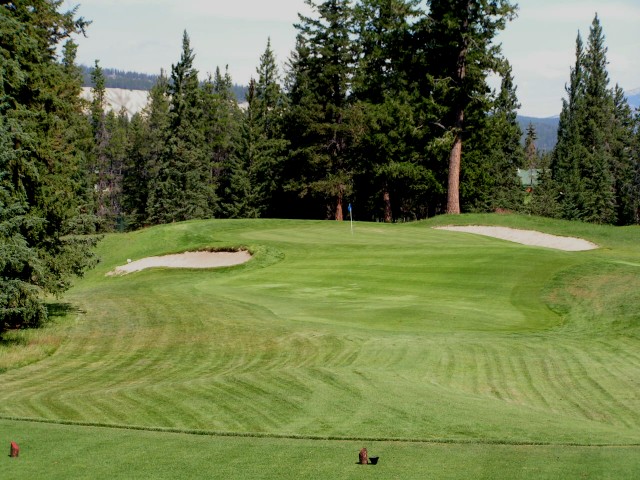 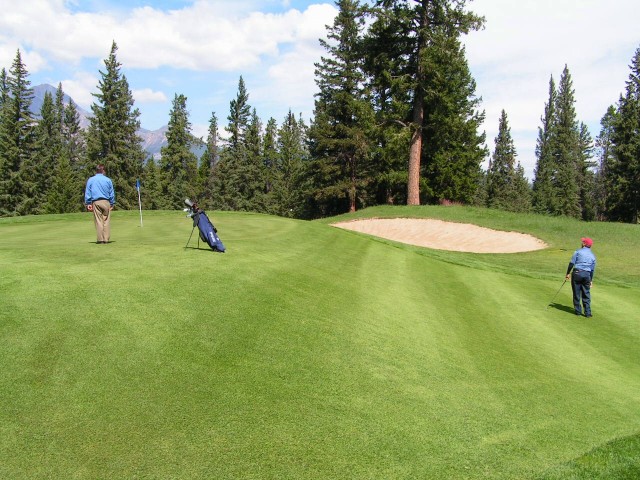 …until after his tee shot! This tee ball actually landed on the edge of the green before spinning down the slope. Many a golfer has faced this difficult up and down at Bad Baby. Note how far back the right bunker actually is.

Sixteenth hole, 380 yards, The Bay; Alan Carter, Director of Golf, notes that there is approximately 80 yards or so on the tip of the peninsula past the 15th green site and 16th tee. Apparently, Thompson was originally restricted from building the holes further out onto the point as cottages were to be placed there. Fortunately, such building never took place and the option is available to at least move the 16th further back such they so desire. Alan Carter points out the breaks on the back to front sloped 16th green during the 2004 annual GolfClubtlas.com gathering. Thompson banked the ground short and right of the green so that the weaker golfer didn’t have to necessarily attempt a forced carry over the lake.

Eighteenth hole, 465 yards, Home; Alister MacKenzie was a great admirer of this Home hole. Sweeping dramatically to the left down a hill,a perfectly shaped draw around the corneris likely to be the beneficiary of a huge kick further toward the green. A short iron can be hit to the long but narrow green. However, the more likely drive finishes well back up the hill and a longish iron will be required to get the job done. A potential two stroke swing hole, and therefore one of the author’s handful of favorite finishing holes in golf. No wonder that MacKenzie thought so much of this finishing hole as it has both beauty and strategic value.

Great golf courses contain a sense of adventure. Late one September, the author was out on the peninsula that holds the 14th -16th holes. In the middle of the fairway was a family of elk. The young ones were away from their rather large mother.Considering it to be imprudent to come between the mother elk and her babies, we took our shoes off, walked into the edge of the lake, and circled quietly past. Such opportunities to be so closely intertwined with nature are rare and make a game at Japser Park an absolute must.