The Links at Hope Island 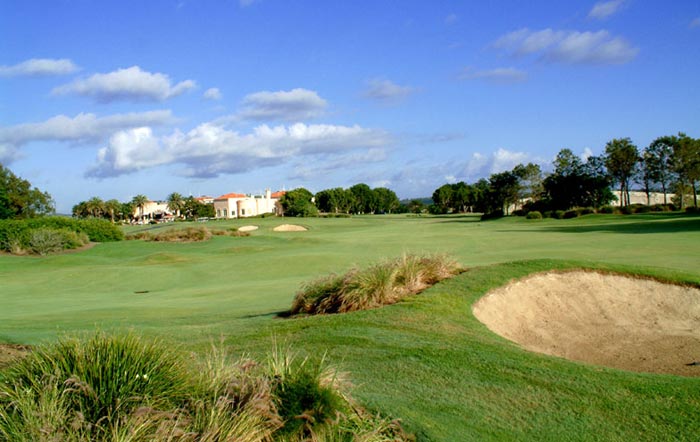 A view down the ninth fairway shows the links flavor of Hope Island. Only the Spanish style clubhouse in the distance suggests that the golfer might be in Queensland.

Peter Thomson and his partners Michael Wolveridge and Ross Perrett were paid the ultimate compliment soon after Hope Island opened in 1993. They were told how lucky they were to have been given such a perfect piece of links land over which to lay the course. Nothing could have been farther from the truth.

The design firm of Thomson/Wolveridge & Perrett inherited nothing but a flat, featureless field located some twenty minutes from Queensland’s coast. From this unpromising beginning, the architects have created one of the dozen most strategic courses built in the past sixty years.

As the course’s name suggests and fittingly from a five time Open winner, the course embodies the best attributes of links golf. The architects had the land beautifully shaped full of ripples, ridges, hollows, and swales and the shaping is so well done that there is no reason to suspect man’s hand. In addition, over 120 pot bunkers were liberally scattered across the course. 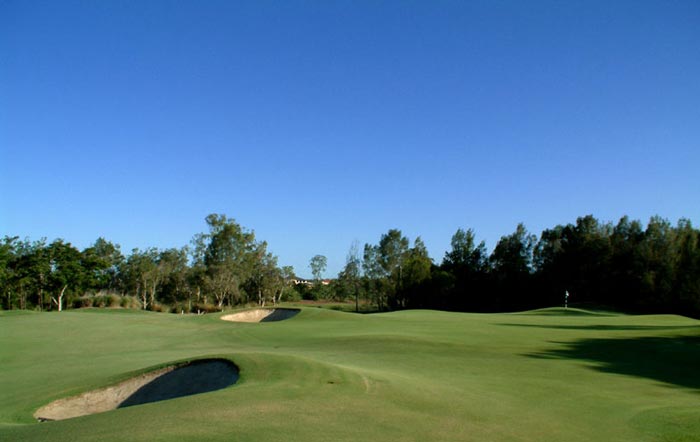 Fairway bunkers, such as these on the 11th, dictate play.

The bunkers serve many purposes other than asking the golfer to execute the usual greenside splash shot. Some, like the pair of bunkers forty yards short of the par three third hole, make depth perception tricky. Others are placed closer to the green but not too close. Thus, if the golfer quits on his tee shot to the one shot fifth, the ball may come up in the bunker fifteen yards shy of the green. The golfer is left with a difficult long bunker shot to gauge.

There are genuine fairway bunkers at Hope Island – not bunkers stuck off to the side of the fairway but bunkers surrounded by fairway. For instance, the bunker in the middle of the fourth fairway infuriates many golfers until they realize that they don’t have to challenge it – they can lay back and then have a straightforward shot to one of the least defended greens on the course. The author is unaware of any course built since WWII where so many bunkers were centrally placed within the confines of the fairway. Though pot bunkers are rarely a visual masterpiece, the end result in the case of Hope Island is a very fine, option laden series of golf holes that require some thought on the part of the golfer.

If it sounds like there are bunkers everywhere, that is misleading. Many holes like the second, sixth, seventh, tenth, and sixteenth have a solitary greenside pot that dictates play. The less sure golfer is generally given plenty of room to aim away from the obvious trouble.

Another common theme this course shares with links golf is the real battle is waged from tee to green. Once on the greens at Hope Island, the golfer has a reasonable chance for a two putt. To the author, this seems to weight putting appropriately. Some sixty years ago, Tommy Armour thought too much emphasis was being placed on putting. He would be have enjoyed his rounds at Hope Island.

However, unlike some links courses, Hope Island has plenty of interest around the greens. Most of the greens are elevated two-three feet above the fairway. A ball indifferently struck has the tendency to keep rolling until it trickles down one of these banks. The resulting recovery shots are diverse and require the golfer to possess a full short game arsenal from the classic bump and run, to a pitch, to a lob, to the Texas wedge. Whichever method the golfer selects, he is likely to opt for another way on the next hole.

Before venturing to this course, the author was dubious of a ‘links’ course in the sun baked state of Queensland. However, the hot climate helps keep the turf dry and firm. Unlike many resort courses, the ball enjoys plenty of run here. Combined with the Pacific Ocean breezes, the pot bunkers are very much in play. Some days it seems as if the ball tends to roll until it finds one. Thus, Hope Island is links golf at its fascinating best, with infinite permutations from day to day.

First hole, 375 yards; An enticing first hole. The fairway is plenty wide and is the only two shotter on the course with no bunkers to threaten the tee ball. The green is elevated those crucial two/three feet above the fairway level.

The wide fairway is intended to help get the golfer off to a smooth start. However, the pushed up green is a more elusive target.

Second hole, 550 yards; A lake down the left dedicates the play for the first two shots. A sandy beach acts as a buffer from the lake from 160 yards to 330 yards off the tee. A magnificent fig tree was saved during construction and further pinches the hole in from the left at the 280 yard mark. The second shot must find a patch of fairway between a bunker 200 yards from the green and three more that pepper the fairway at the 100 yard mark. The tabletop green is smallish but is a reasonable proposition with a wedge in your hand. However, somewhere along the line, the golfer invariably seems to get tangled up and the approach shot ends up being much longer. From further back, the elevated green complex is a tough target indeed. 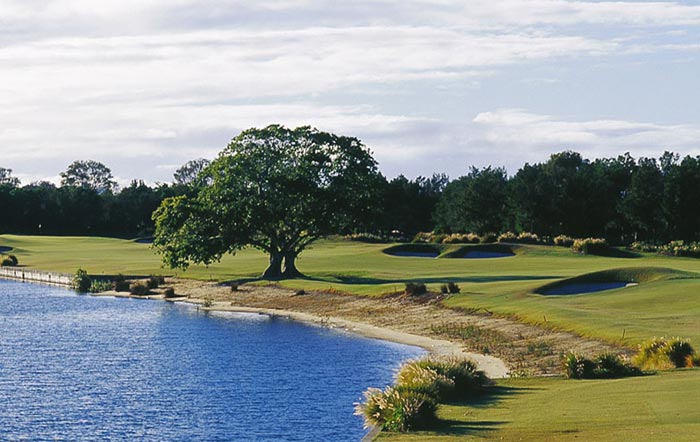 Twelfth hole, 385 yards; This shortish two shotter could be Thomson’s tribute to the 12th hole at St. Andrews. There are bunkers everywhere and yet when the golfer is standing on the green, he can not make out a single one. The placement of a short par four after a birdiable par five is an interesting strategy. Many better golfers, buoyed by the confidence of birdieing the eleventh, step up on the twelfth, look at the yardage, and start thinking about another birdie. However, after landing in one of the nine fairway bunkers, their thoughts soon change. 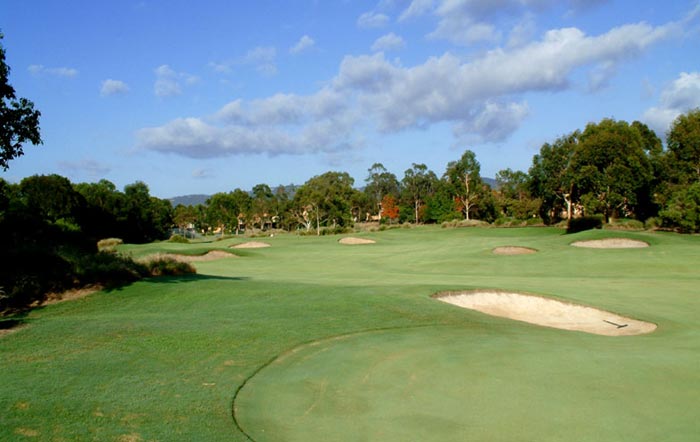 The 12th fairway is littered with bunkers.

Thirteenth hole, 425 yards; A big two shotter that doglegs around a lake. The hole encourages bold play as the farther up the fairway the player drives, the less interrupted the approach shot. Another appealing risk versus reward decision must be made. 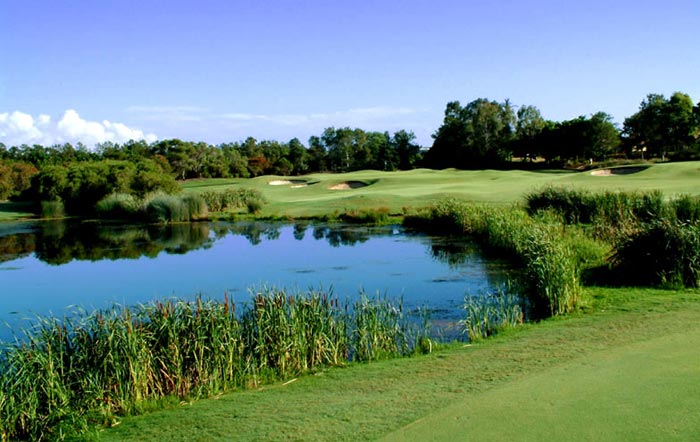 The ideal drive at the 13th finishes close to the lake. Though the property is relatively flat, the approach is significantly uphill, requiring at least an extra club.

Seventeenth hole, 210 yards; This par three is the only approach shot that must directly carry water on the course. Thus, its effect can be unsettling at this late stage in the round. Appropriately enough, there is a fairway bail-out area to the right of the green that gives golfers of all levels a chance for a pitch and putt par. 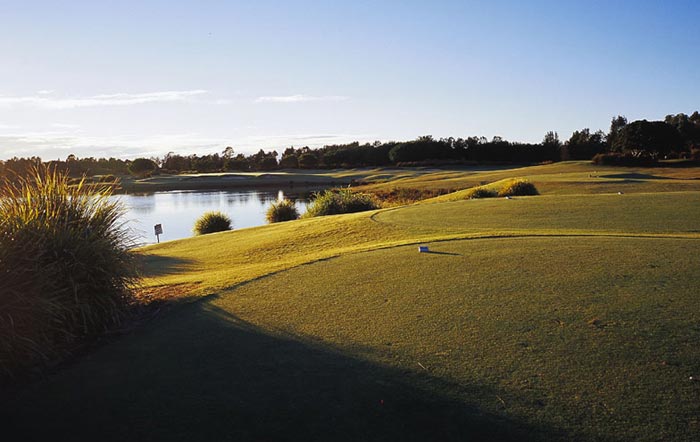 The view from the 17th tee in the early morning light.

Eighteenth hole, 565 yards; More than a two shot swing is possible on this three shot finisher.The biggest lake on the property is down the left of the fairway and tells the golfer where not to go. A string of three deep bunkers set into a ridge 320 yards from the tee dedicates placement, regardless if the hole is into or down wind. To the architects’ credit, they did not place the green right on the water’s edge – there is a fifteen yard grassy hollow to the left of the green. The strong golfer can have a reasonable ‘go’ at the green in favorable wind conditions, making for an exciting finish. The unconfident golfer trying to nurse a lead still must execute each of the three shots. 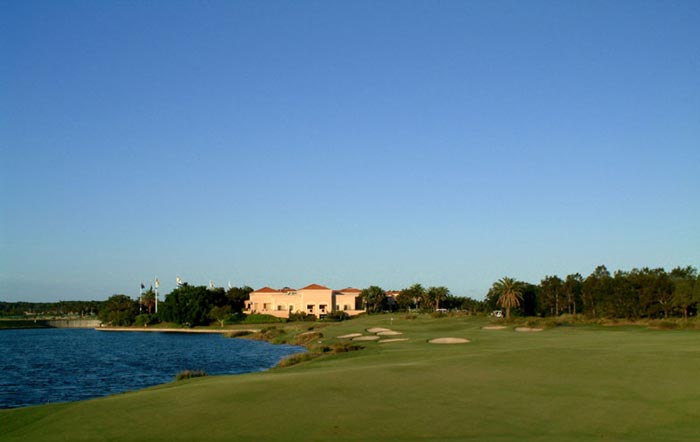 The curvature of the lake was put to excellent use on the 18th.

A particular strength of the course is the collection of three shot holes. Collectively, they may be the best in Australia and they serve to highlight the strategic use of bunkers throughout the course. A third of all the course’s bunkers are on these four holes. On the eighth hole,the architects paid homage to the 16th hole at St. Andrews with its fairway bunkers off the tee. Further up the long fairway, there are four pot bunkers scattered fifty to eighty yards short of the green. The golfer can 1) lay shot of this cluster, 2)go left of the bunkers for a shorter shot, 3) carry the bunkers to the right to set up a straightforward pitch down the length of the green, or 4) fly the cluster in hopes of reaching the green. The variety of options like this continually pulls the thinking golfer back to Hope Island for another round. 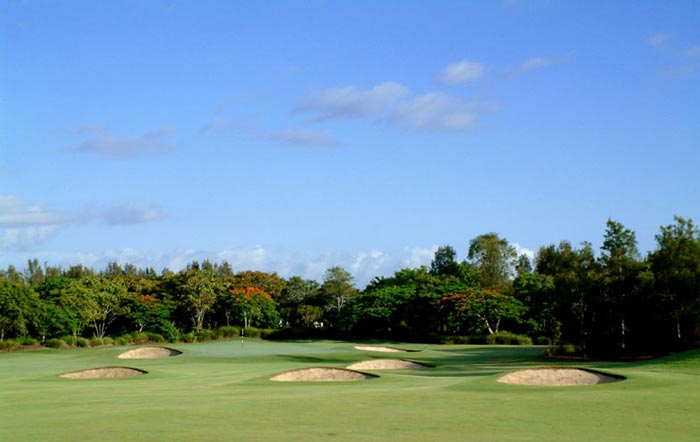 Well placed hazards add immeasurable pleasure to the game as they create strategic dilemmas for the golfer to mull over. A perfect example are these diagonal pots short of the reachable three shot eigth green.

Thomson, Wolveridge, and Perrett spent untold hours stalking the flat property to figure out the best way to breath life into it. Their advanced planning paid off handsomely as the course is a beautiful place. It is a pity more architects don’t show the same strategic flair.