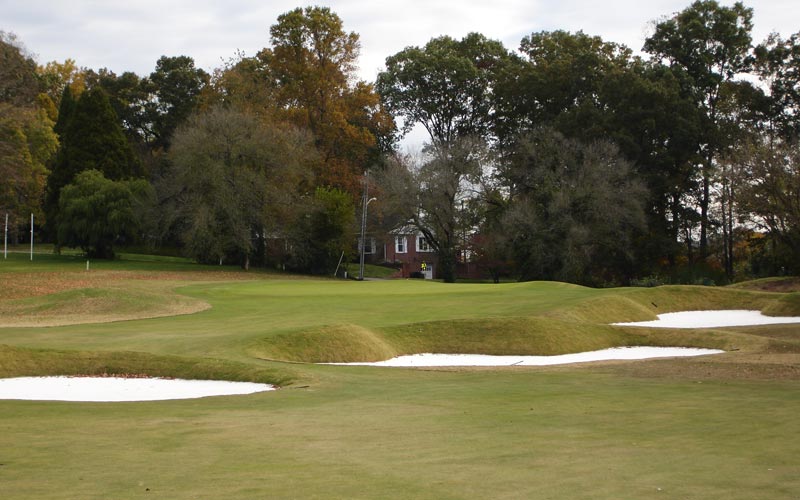 The timless appeal of Ross is well evidenced at Holston Hills; pictured here are bunkers that start 60 yards shy of the thirteenth green and wrap around to the green’s right.

Located just east of Knoxville near the foothills of the Smoky Mountains, Holston Hills is as well a preserved Donald Ross course as can be found. Built in 1927, Holston Hills immediately was recognized as the finest course in the state and hosted every important regional tournament, including a PGA Tour event.

Little has changed in the ensuing seventy plus years: the fairways are broad, the trees, though mature, remain back from play and once again, Ross chose to defend par at the green site. When the club engaged Tom Doak’s Renaissance Design in 1997, little was required. Renaissance assisted with the restoration of a handful of grass faced bunkers, convinced the board to thin some trees, and helped determine the mowing lines, including perimeters for the new USGA greens.

Why has Holston Hills avoided the same fate as so many Ross designs that have been tampered with by lesser architects who didn’t understand Ross’s design philosophy? Ironically, one reason is that the club is located on the ‘wrong’ side of Knoxville from a social point of view, and thus it never attracted the money/big budget normally associated with such a quality course and facility. Without superfluous money, the club has left well enough alone and the golf world is lucky indeed to have such a pure example of Ross’s design talent.

Students of Ross’s dozen or so finest works sight his ability to route eighteen holes over a piece of property in such a manner as to maximize the property’s finest natural features, all the while avoiding any forced or contrived holes. Such is most definitely the case at Holston Hills.

In fact, anyone interested in studying how Ross found the green sites and then worked backwards to find the best string of holes should come study Holston Hills. Situated on what was treeless farmland, the property features gentle movement with many natural land forms five to fifteen feet in height. By positioning the green sites on top of such hillocks, Ross created attractive targets that give the golfer plenty to think about in the fairway. Greens such as the third, sixth, eleventh, fifteenth, and sixteenth feature a fearsome amount of slope, given today’s green speeds. Elsewhere, Ross benched greens into up slopes such as at the ninth, twelfth and fourteenth greens and let the flow of the land create the challenge. From a strategic point of view, the golfer can tell in the fairway (and often from the tee) where he should leave himself in relation to the hole. Far too many modern courses have segmented greens that make no sense from the fairway, thus robbing the hole of strategic merit. Not so with a Ross course in general and with Holston Hills in particular. 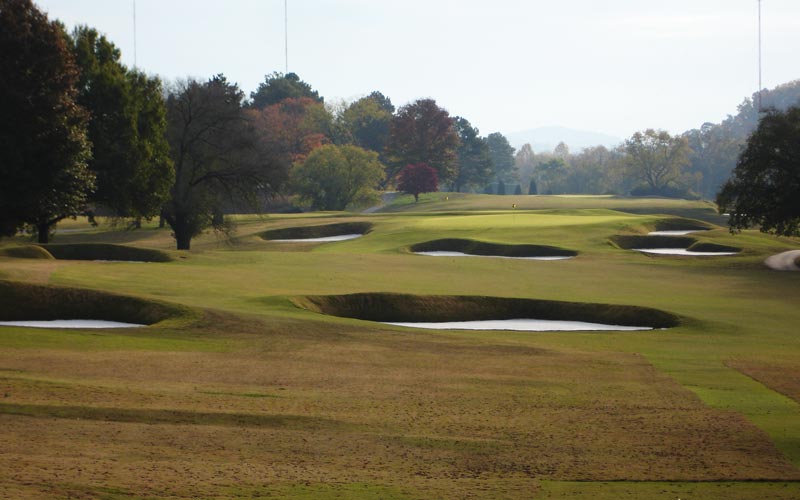 The sixth green is another well placed Ross green atop a hillock (the second hole flag can be seen just to the left of the sixth’s flag). 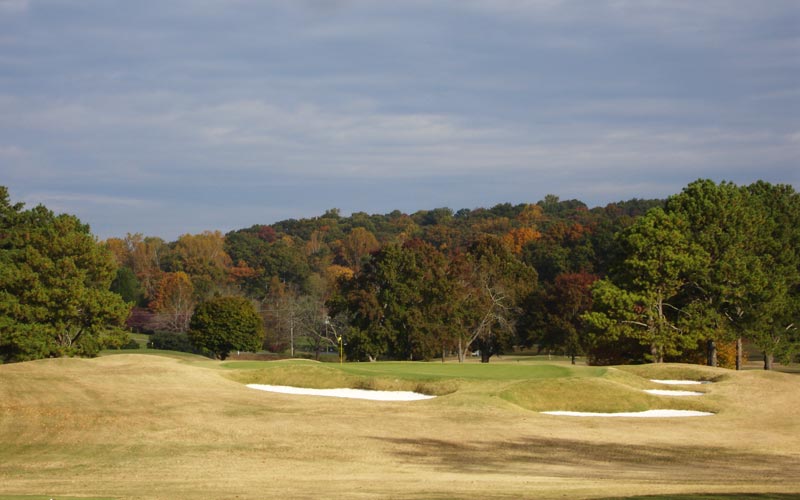 Situated along a ridge, Ross pushed up the one shot eighth green a few feet to make an exacting target for this hole of 140 yards. 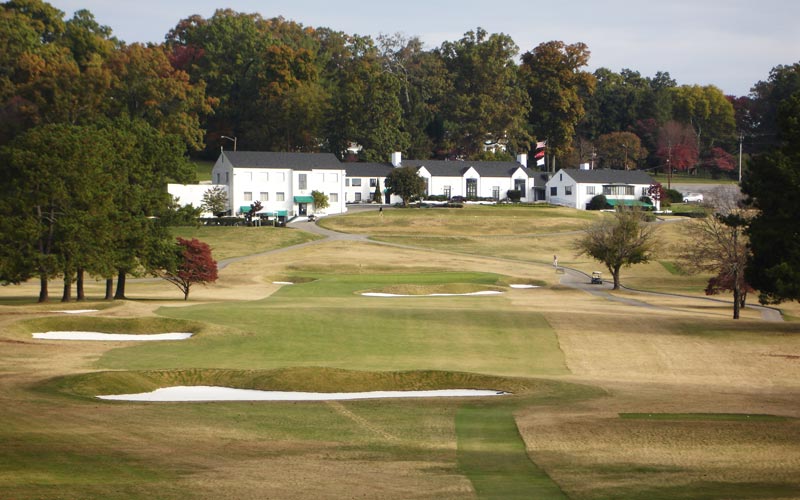 The clubhouse overlooks play of the ninth, where Ross benched the green complex into the hillside. Again, this green follows the land, meaning putts from back to front are quite quick.

As one strolls around the 150 acres, no distractions prevent one from enjoying his game. No holes have been modernized or incongruent features added. An overforced simplicity exists that allows one to enjoy his time with nature. 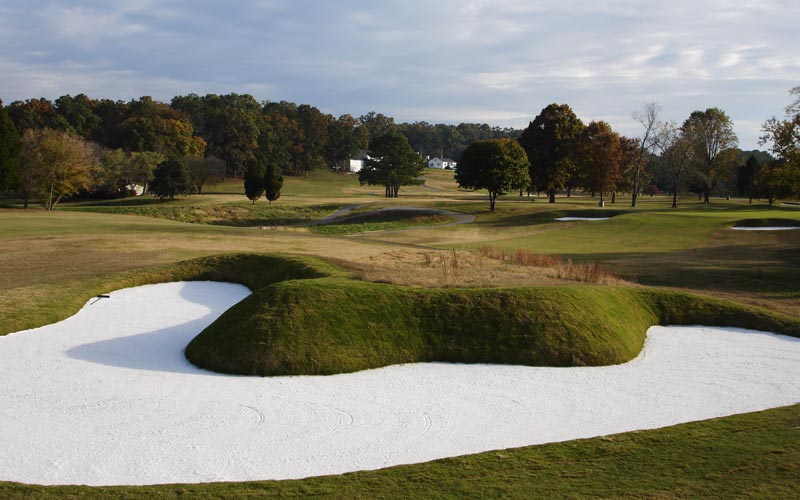 While there is no such thing as a ‘Ross bunker,’ the genuine ones at Holston Hills demonstrate there is more to a Ross bunker than bringing a grass face straight down. 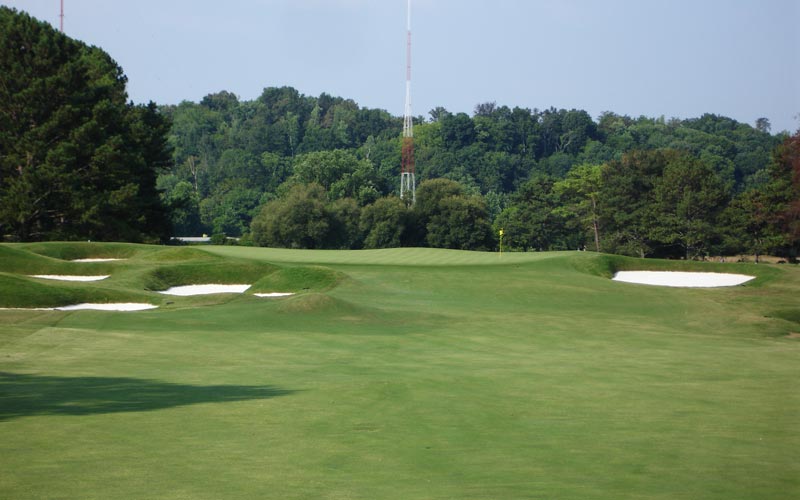 Holston Hills isn’t cluttered with trees as most Ross courses. Here is a view of the fifteenth green complex.

Second hole, 415 yards; One of Ross’s few Cape holes, this one features a ‘bite off as much as you dare’ tee shot from one high bank across a lake to another (yes the lake was always there). The green is open in front and if the golfer has found the bermuda rough off the tee, he will have to bounce the ball onto the putting surface. Green Keeper Ryan Blair and his crew provide uniformly excellent fim conditions throughout the course. From the fairways, to the all important but oft overlooked area directly before the greens, to the putting surfaces themselves, Blair strives to make the course play quick. Seeing approach shots from the rough on this hole hit in the middle of the green only to roll off and down the back shaved bank is a good indication of the challenges that lie ahead.

Third hole, 405 yards; The bunker complex on the inside of this gentle dogleg is the exact sort that so many clubs have either removed all together or allowed the tree line to encroach to where the bunkers are no longer the principal hazard. Such is not the case at Holston Hills were the bunkers remain true to Ross’s intent. 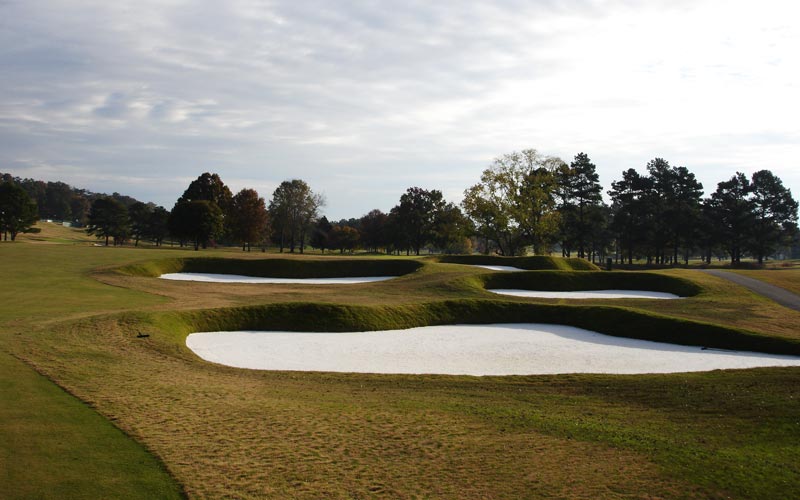 The third fairway bends to the right past this four bunker complex. 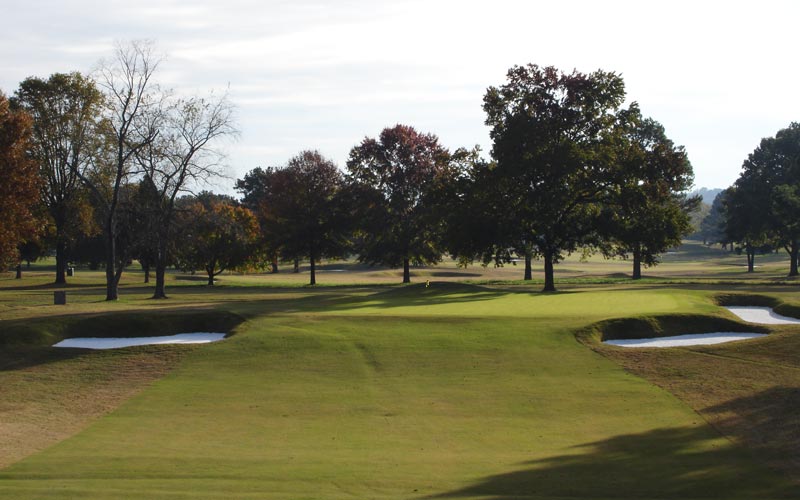 As seen from just short of the third green, one imagines Ross spotting this location on the far side of a gulley as one of the course’s more obvious green locations. The front left hole position shown above is one of the toughest on the course to get near.

Fifth hole, 615 yards; One of the games most attractive long three shot holes. Bunkers lurk down both sides of the fairway and the grass faces are high enough to prevent the golfer from hitting more than a mid iron out. Any misstep on the first two shots and in all likelihood, the green fails to be in reach for one’s third. The bunkering insists that the golfer concentrate on each of his three shots, a rarity. 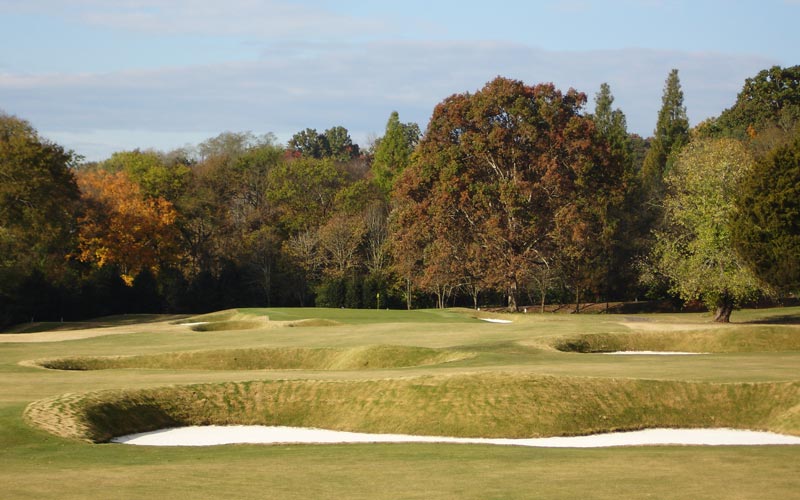 This bunker cuts across more than half the fairway at the 270 yard mark from the green. More bunkers lurk ahead.

Seventh hole, 475 yards; The split fairway seventh is Ross’s most innovative hole at Holston Hills and is a wonderful example of a half par hole. The weaker golfer can go right and can still accomplish the hole in the suggested number of strokes. The tiger will go left, which requires a two hundred yard carry past a pond and over a ridge. This fairway is narrower and is bordered by trees on the left. But if one does find the fairway, the downhill slope will help pitch his balleven closer to the green and one may be left with as little as a mid iron into the green. Michael Fay likes the hole so much that he selected it in his eclectic make-up of a Ross course in Golf, As It Is Meant to Be Played. 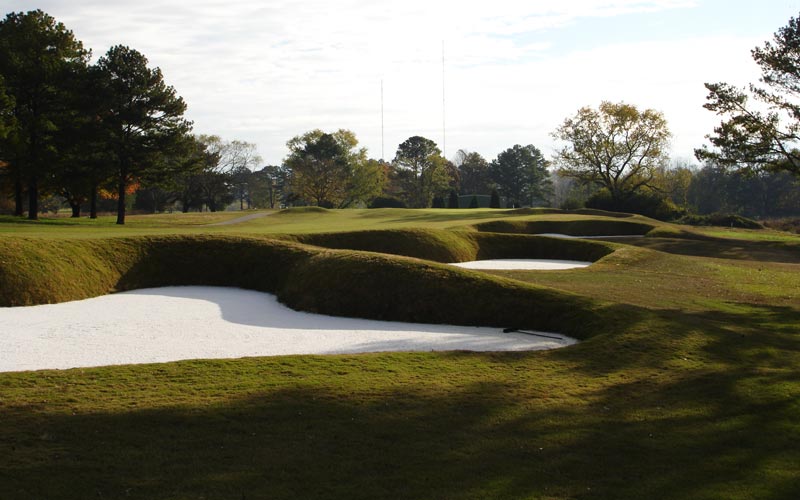 From the end of the right fairway, the golfer faces a 220 yard shot across a diagonal bunker array.

Twelfth hole, 470 yards; The hardest par at Holston Hills comes at this uphill hole. However, the hole is so esthetically pleasing from the tee that the golfer may not fully appreciate the task at hand. Too many modern courses feature holes that look AND play tough: what is the charm in doing that?! Creating a bear of a hole that remains pleasurable is something altogether more vexing and Ross is one of the very few who consistently didso. 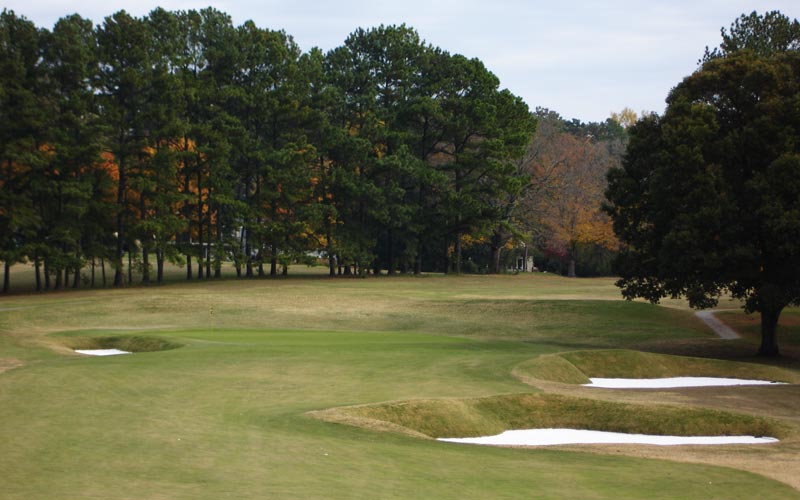 The appealing twelfth, as it meanders up the slope. The green possesses the most back to front slope of any on the course.

Fifteenth hole, 380 yards; Unique because of the distinctive five foot tall grass mounding that cuts across the fairway at the 190 yard mark off the tee, the hole’s real defense is the green’s back to front pitch and its imaginative interior contours. 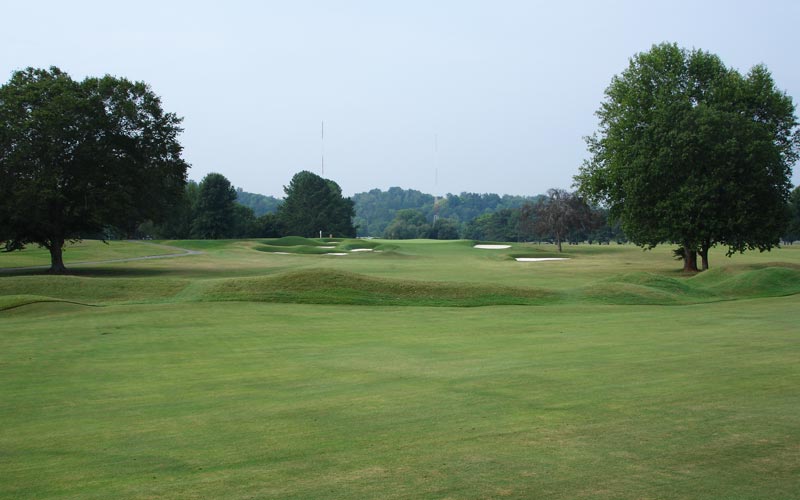 Once the unique mounding is cleared off the fifteenth tee, the approach is to yet another perfectly placed green.

By the time the golfer reaches thesixteenth tee, he has played the toughest holes at Holston Hills. The remaining three holes are a short two shotter followed by a pair of reachable three shot holes. Such a closing stretch creates an exciting finish, either in stroke or match play. Plus, it gives Holston Hills its own unique pacing. Too bad modern architecture relentlessly focuses on monster finishes, many of which are boring and leave the golfer felling beat up after a round.

The club golfer can take great delight as he plays a round at Holston Hills. He is in an uninterrupted, expansive setting of rare tranquility. He should hit plenty of fairways (there is little psychologically terrifying about the tee shots save for the Cape hole) and the greens are of ample size as well at an average of 6,600 square feet. However, the tiger golfer will be trying to hit the side of the fairway that opens up the approach shot and will relish placing his approach in the right portion of the green. Putting is an enjoyable test for one and all.

This is how Ross intended golf to be played: fun for all golfers while still challenging to the best. Holston Hills lives up to that charge as well as any Ross course in the country.And just as importantly, the Club continues to head in the right direction (unlike a lot of clubs blessed with Ross courses). Listen to Green Keeper Ryan Blair:

The club is now moving in the direction of just becoming a golf club, while at the same time working to better preserve the course.Many trees still need to be removed. For the short term my staff will be working on making the course play more like a traditional classic course should, Hard and Fast. Turn off the irrigation, stop putting out the fertilizers, mow out some chipping areas, and return the fairways to their traditional shape. I am ready to return this course to its classic links tradition. 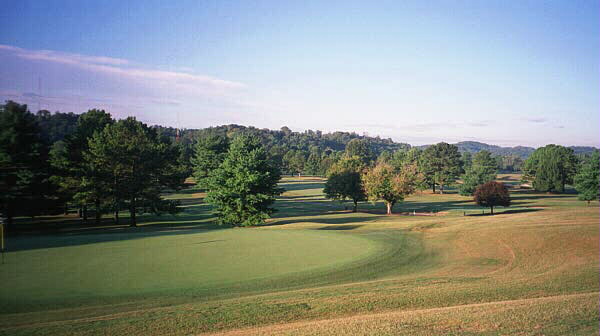 The tranquil setting near the foothills of the Smoky Mountains.