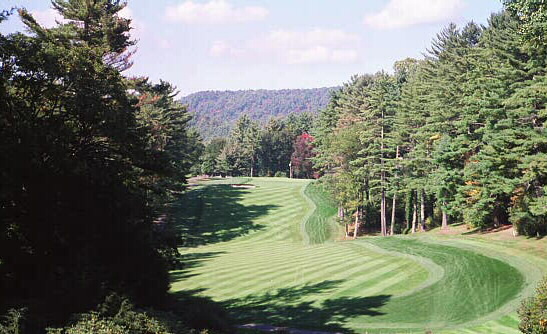 The appeal of mountain golf is highlighted by this view from the fifth tee at the aptly named Highlands.

As for Highlands Country Club, the challenge is distinctly different from that at Roaring Gap. Most noticably, it is a tighter driving course. Only a rifle straight drive will suffice on holes like the 1st, 7th and 9th, in part because of out of bounds as defined for homes that have been built in recent times at this highly sought-after mountain retreat.

Secondly, unlike the conventional par 72 at Roaring Gap, Highlands has 5 one shot holes and 3 three shotters. Its distance of 6,265 is slightly misleading in that par is only 70. Also, Highlands has three two shot holes that measure in excess of 420 yards and two of its one shotters measure 200 yards. Hence, more medium and long iron approaches are called upon at Highlands than at Roaring Gap.

Also, thanks  to Ron Pritchard’s excellent efforts when he re-built the greens in 1999, Highland’s greens have more interior movement than at Roaring Gap and vary greater in size and shape. The golfer needs to play Highlands several times to best understand how to use some of the slopes and contours (like the superb ones found within the rolling fourth green) to his advantage.

Fifth hole, 420 yards; No matter how many times you stand on the tee, the view remains captivating. The ideal shot is downthe right side of the fairway from where it will bound off the slope and run another fifty yards toward the center of the fairway. One of golf’s truly special shots to play well and the fact that there is so much run is a testament to the fine job that Green Keeper Eric Shomaker and his crew do at Highlands.

Tenth hole, 425 yards; As good as any Ross hole that exists. The stream is ingenuously used in the landing area and the golfer must flirt with it to bring the green within reach in two shots. 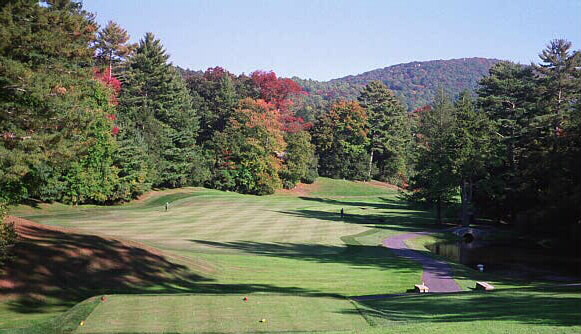 The tee ball from the 10th at Highlands is into a valley with a stream on the inside of the dogleg right. 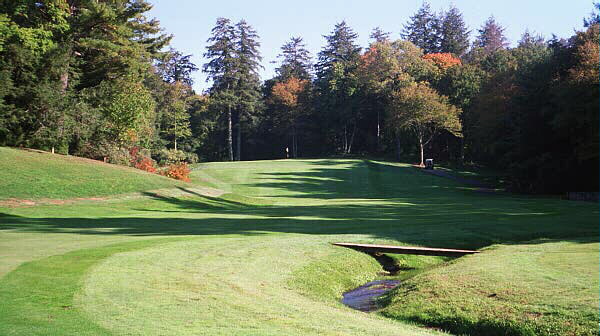 The demanding 200 yard uphill approach after a perfectly placed drive near the meandering stream.

Twelfth hole, 350 yards; The drive is to an unusualsaddle back fairway that was brought about by necessity: nothing but granite is under the right self. If built today, a modern architect might blast away and create a flatter hitting area. Such would be a pity as the hole would lose its unique character. The back to front green has several distinct areas and the golfer is well advised to find the correct one on his approach. 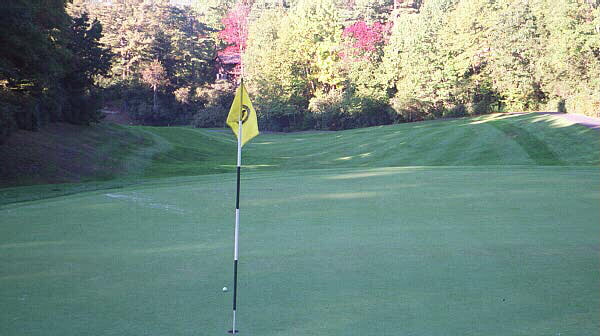 From behind the 12th green, the saddleback nature of the fairway is evident. So is the back to front slope in the green. The pictured ball hit eight yards behind the hole but took the back stop on the green and almost almost went in for an eagle.

Thirteenth hole, 195 yards; An inspired one shotter across a gully to a green that is angled away from the golfer toward the back right. Short is the only safe play as long left or highright are shots that will bound well away from the green and into all kinds of trouble. 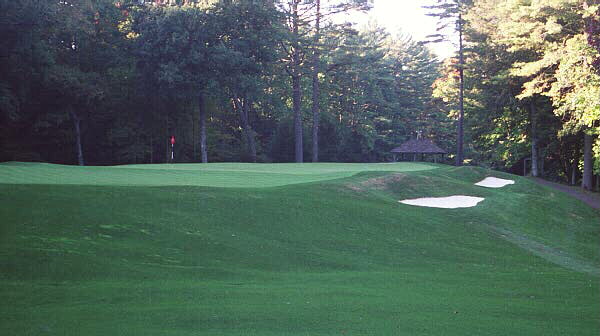 Sixteenth hole, 150 yards; Yet another fine one shot hole, this one is to a shelf green that will remind the golfer of the general formation of the much admired 6th hole at Royal Dornoch. 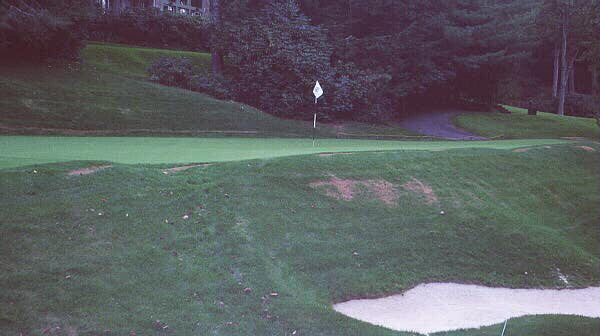 Broadly reminiscent of Royal Dornoch’s 6th, the golfer notes the hill left, followed by the shelf green and then the bank.

About Highlands, Bob Jones found the holes of such compelling nature that he spentmuch of the summershere rather than in Atlanta. And as Jones was such a keen judge of course architecture, not much else needs to be added as to the quality of the golfat Highlands!

In summary, many mountain courses have been built in North and South Carolina since this pair of Ross gems opened in the 1920s. The newer courses are longer and have higher slope ratings but so what? None match Roaring Gap and Highlands in terms of fun, and these courses are further proof that 6,300 yard courses are often times more rewarding to play than their longer – and less character-filled – counterparts.