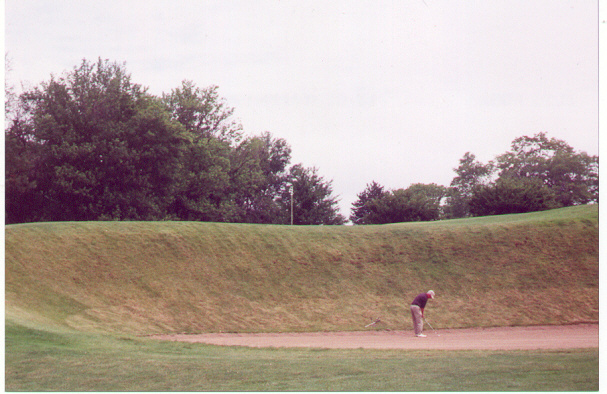 Welcome to Harrison Hills! Believe it or not, the authors’ father is about to save his 4 from this bunker right of the 15th green.

Imagine you are an aspiring architect and are faced with a challenge in your home state: One of the best nine-hole courses in the world has commissioned you to expand its course to 18 holes, with the additional holes to be routed over much less inspired land.

Such is the daunting task that faced Tim Liddy with the Harrison Hills Golf and Country Club in Attica, Indiana. The original nine, designed by William Langford, was a gem, with his old-fashioned, Macdonald/Raynor-esque engineered style fitting into the rolling hills. For example, the (then) 6th green is perched on top of a knob, allowing for ten-foot deep bunkers to be easily dug into the side of the hill. The land Liddy was given was mostly flat farmland, with little opportunity to recreate the ‘look’ of the original holes. To make the task of blending a new nine with a 70-year-old classic even more difficult, the original course now had plenty of mature trees, while Liddy’s land was mostly open.

So then, how to go about this project? Fortunately, Liddy had worked on a number of courses with Pete Dye, whose work often has an engineered look that can prompt comparisons to the work of Langford (who, coincidentally, designed Maxinkuckeee, where Alice Dye spent a fair amount of time while growing up). 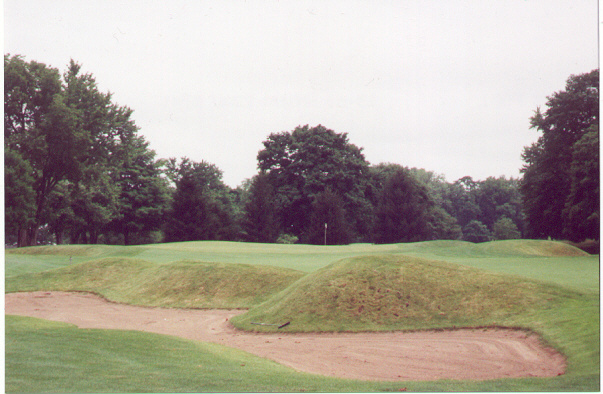 The pitch to the charming 14th.

Perhaps most importantly, Liddy and owner Geoff Curtis appreciated the value of the original nine holes. In fact, much of the budget was spent restoring those holes (e.g., restoring greens to their original sizes, reclaiming abandoned bunkers). Insome ways, Liddy’s work to the original holes is just as important as the holes he added, proving his ego was not a factor.

Liddy wrestled the most with the routing. The club wanted both nines to return to the clubhouse, but to do so would inevitably mean that it would lose one of its precious original nine holes. In this case, the rolling three-shot 3rd would have to be sacrificed. Liddy was not thrilled at this prospect, but that was the best of a bad situation.

As the new holes age, the course will only blend together more and more. The course is planning to plant hundreds of trees on the new holes. While the authors believe trees on golf courses have become greatly overrated and, in many cases, destructive to the architectural quality of the design, Harrison Hills is the one course where they would support the addition of trees, provided they are planted in cosmetic and not strategic locations. As the trees mature, the distinction between the work of Langford and that of Liddy will become even more blurred.

2nd hole, 195 yards: From the tee, the prospect is not encouraging, as the player is asked to thread his tee shot between two clumps of trees to a slightly sunken green. The deception is carried on by the relatively narrow green that slopes off on both sides. 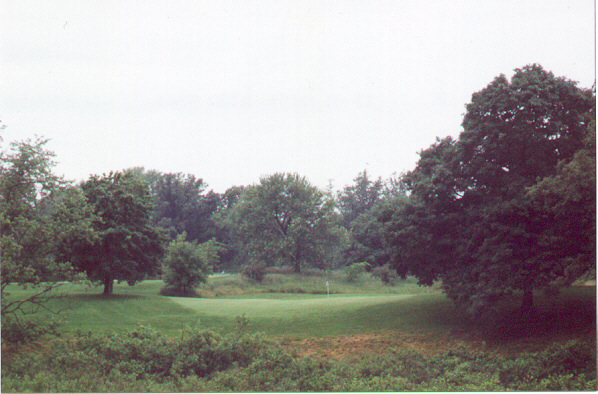 From the 2nd tee, the flagstick is visible, but not the putting green.

5th hole, 520 yards: The second of Liddy’s holes, the 5th fulfills everyone’s stereotype of the mid-west, flat and open. Liddy is able to tie the hole together with the rest of the course with an abruptly angled green and a manufactured bunker extending in front of most of the green. This and the 7th, another three-shotter, hint that Liddy learned well from Dye, the best modern designer of three-shot holes. The 5th and 7th at Harrison Hills complement each other well, playing in opposite directions, with the 4th reachable in two and the 7th, at 645 yards (!), requiring three good shots to get home. 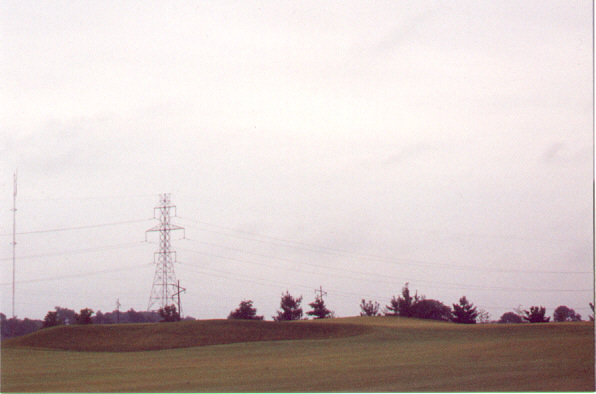 The 5th, showing the drastically different land many of the new holes occupy.

9th hole, 435 yards: Built into the slope of a hill, the sweeping green on the 9th is the best on the course, old or new. 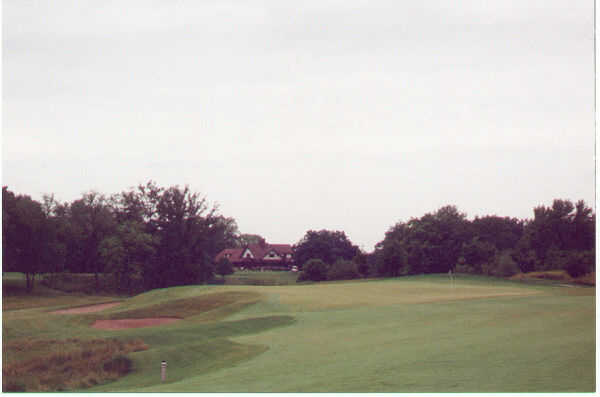 13th hole, 520 yards: While playing the hole, the authors had little idea that this straightaway, uphill three-shotter was originally a dog-leg right two-shotter (the old 4th), for the 13th plays quite well, with its blind second over a hill to the well-bunkered green below. 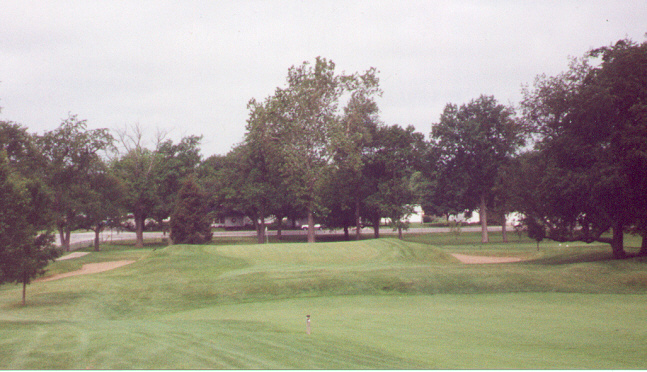 Formerly a two-shot hole, the 13th now plays well as a tempting three-shotter.

15th hole, 356 yards: The authors’ favorite hole on the course, the 15th is the most dramatic and dangerous. The narrow green is perched on top of a hill with deep bunkers left and right. After seeing this hole, the 16th at PGA West (Stadium) seems tame! 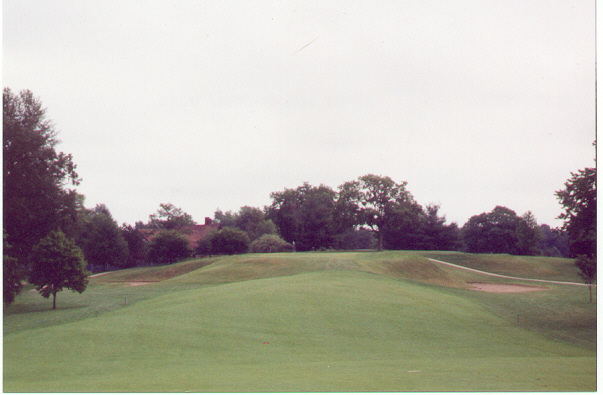 The 15th, with its two fearsome bunkers.

In an interview on this site, Liddy himself described his task at Harrison Hills as ‘very intimidating.’ His approach: ‘I wanted the project to feel like it had been built at one time, and look like Langford had completed the entire job. I wanted it to look like I had never been there.’ 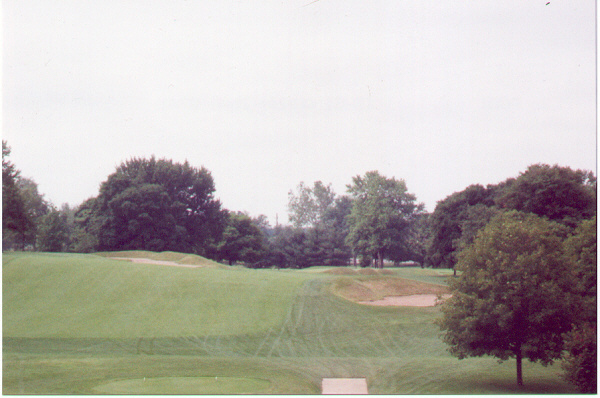 The tee shot on the 16th must be fitted between the two bunkers.

How successful, then, was Liddy with his charge? Quite. In their first round at Harrison Hills, the authors had to scratch their heads much more than expected to determine which were the original holes and which were Liddy’s creation. While it was evident, because of the terrain, that holes 3-9 are new, holes 10-12 left the authors puzzled. Those three holes are set among mature trees and easily ‘look’ as though they could be originals. Standing on the 12th tee, a one-shotter through the thickest part of these trees, the authors were completely convinced that it had to be a Langford hole. When they reached the green, the turf itself looked new, but the authors were still convinced it was an original hole and that perhaps Liddy had been asked to expand/rebuild the green because of poor circulation in the trees. The authors knew that one hole (the 3rd) had been destroyed for the course, and they suspected that the 10th and 11th holes were new – could the old 3rd have taken them from the 2nd green to the (new) 12th tee? No, for the 12th is one of Liddy’s holes. This debate over the 12th emphasized that the overall design ‘style’ of the two parts of the course is close – that the main difference lies in the terrain (flat v. rolling) and trees (mature v. non-existent), not in the architects. 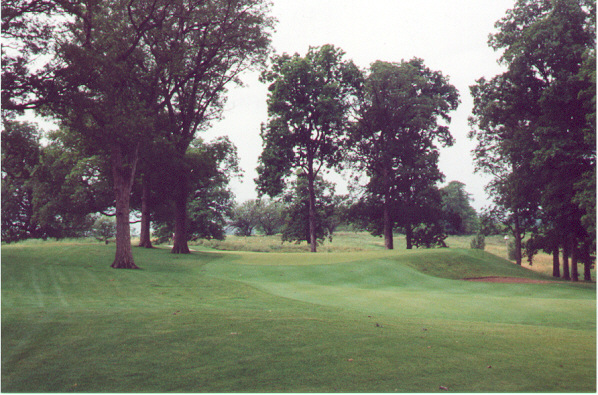 The 12th: Langford or Liddy?