The 1960s and 1970s did not produce near the number of endearing courses as the non-war decades had previously. Lack of strategy, a false quest for length at the expense of variety, and bland green complexes became the norm as numerous green committees fell in love with the idea of pursuing ‘a 7,000 yard championship course.’ One of the most notable exceptions to this bleak trend is the Chanticleer Course at Greenville Country Club.

Opened in 1970 at just over 6,700 yards, this course was never one of Robert Trent Jones Sr’s longest. However, it is one of his very best, thanks to the creation of a number of strategic holes by maximizing the creek that meanders through the property and its rolling terrain. Back in the late 1960s when the Greenville club board presented Trent Jones with seven topography maps from different potential locales, Trent Jones wasted little time in selecting today’s site. One result of that decision is that Chanticleer doesn’t have a single indifferent hole, unlike some of his other well regarded courses such as the Golden Horseshoe or the famous Dunes course in the same state. 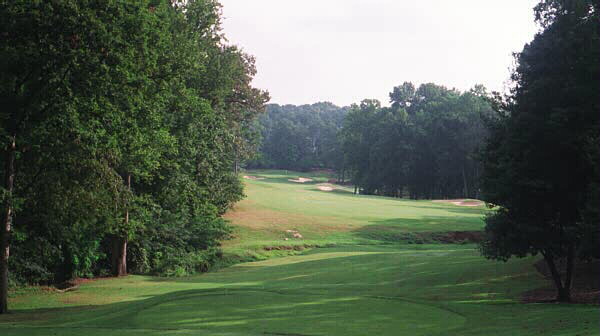 The natural rolling terrain and the ever present creek are what make Chanticleer special. Pictured is the long 7th from its elevated tee.

The terrain is blessed with perfect movement with 30 and 40 foot hills that are never too abrupt and give each hole its individuality. Combined with the creek, the course is a natural that is never at odds with its environment, and thus enjoys a timeless appeal to this day. The dogleg holes in particular are well conceived and give the better player an advantage to seek off the tee. And better players have long been drawn to this course as it has hosted every major regional event at one time or another. Indeed, if not for the intervention of a very high profile PGA Tour member, this course was the likely candidate to host the 1975 Ryder Cup.

By 1970, Trent Jones was famous for building/renovating courses and making them tough. More so than any architect, he ushered in the aerial, power game. On Chanticleer’s opening day of September 12, 1970, Gene Sarazen declared ‘If you start spraying on this course you better have a lot of balls with you.’ Mr. Sarazen went on to favourably compare the pressures on each shot at Chanticleer versus the finest courses in the South. While Trent Jones’s philosophy of ‘hard par, easy bogey’ is captured here (the slope rating is 144), it is not done so at the expense of variety and charm. That is one area where the course differs from others built during that period but there are several other reasons that Chanticleer represents a special course .

First, the routing is unique. Trent Jones let the holes fall where they may, atypical in 1970 when the alternate par hole theory, as exemplified by the pacing of the front nine at Augusta National with its 4-5-4-3-4-3-4-5-4 sequence, was the rage. The first hole at Chanticleer is the number one handicap hole and is then followed by pars of 3-5-3. As for the last five holes, only one is a two shot hole. This pattern gives the course a uniqueness that many modern courses with their formulaeic 5-3-4 finish will never achieve.

The other notable feature of the routing is that on more than half the holes (1, 2, 3, 6, 7, 10, 11, 13, 15, and 18) Trent Jones provides the golfer with a downhill tee shot. The golfer often has a good view of the hole, where to go and where not to go. Thus, the golfer can clearly work back to the tee his strategy, given where the hole location is for that day. A course with such strategic merit never grows tiresome to play, as the longstanding members at Chanticleer will be the first to tell you.

A second attribute of Chanticleer often found wanting in 1970 era courses is the attractive green complexes. Some are angled (eg 2 and 4), some are pinched (eg 16), some have ideal natural back to front pitch (eg 6 and 7), some have great interior contouring (eg. 5, 8, and 9), others have great depth (eg 17) while still others are much more wide than deep (eg 14). The greens have required no alterations and have passed the test of time with full marks. 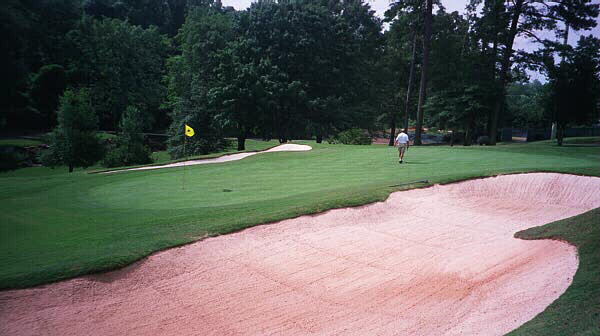 Thirdly, the one shot holes are noteworthy as a set because of the difficulty they achieve without relying on length (none are longer than 175 yards). Rather, the angling of the greens and their slopes pose the vexing problems. The downhilll 2nd green runs from front right to back left and slopes toward a pond; the uphill 4th slants in the opposite direction and is fronted by bunkers; the 14th green is more wide than deep; and finally the 16th, which is recognised as one of the toughest in the state, runs along the crest of a hill with the front third of the green a mere 8 paces in width and is pinched in by bunkers on either side. 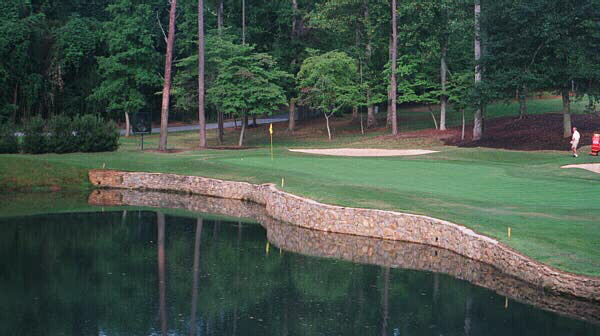 Length is not what makes the downhill 170 yard 2nd tricky. Robert Trent Jones Sr. appreciated the design virtues of the 12th at Augusta National early in his career and often created such angled, narrow greens.

Seventh hole, 510 yards; The USGA’s Golf Journal once shrewdly selected this as ‘A Great Golf Hole.’ Though there are plenty of tougher holes, this one is full of charm and a treat for any level golfer. The tiger will try and hit the elevated green in two but even if successful, can he get down in two putts? The back to front pitch is fearsome and a dreaded three putt par can be the sad result. For most of us, a seven foot deep bunker on either side of the green encourages us to be long with our pitch but again, long on this green means a trying two putt. 8th hole, 400 yards; The highlight of this hole is one of Trent Jones’s all-time finest green complexes, perhaps the equal of the 4th green at Spyglass Hill. The hole has the basic design characteristics of the 13th at Augusta National: the stream cuts across the tee at the 200 yard mark, winds up the left hand side of the fairway before crossing in front of the green and hugging its right side. A drawn tee ball is ideal and the golfer is rewarded with a shorter club into the green. Ten paces on, there is an abrupt ridge which can act as a back stop: the thinking golfer will fly his ball here and let the slope slowly feed it back down to the front hole locations. Past the ridge is another smallish area that is the most difficult target on the course to find. Pull it left and the bermuda rough or bunkers will leave you with a near impossible recovery shot to salvage a par. The right third of the green hugs the creek and offers the flatter putting surfaces but finding such hole locations is no bargain. All in all, a terrific hole. 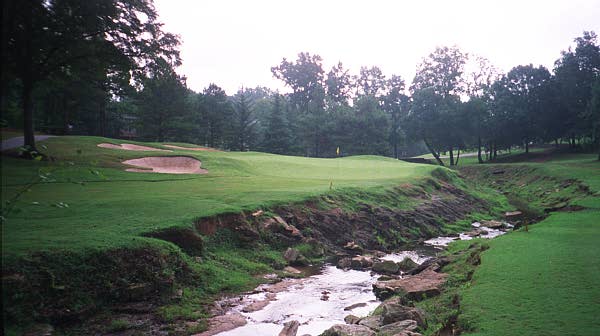 Twelfth hole, 395 yards; One of the hardest sub-400 yard holes in the game, this one doglegs left around the elbow of the creek before heading uphill to a narrow, two tiered green. 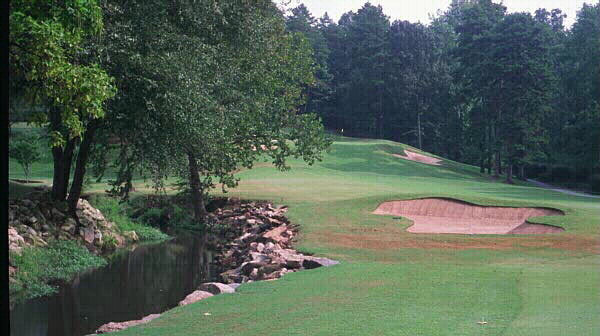 The dogleg 12th with the elevated green in the distance

Seventeenth hole, 500 yards; Another appealing use of the stream occurs at the 17th, where it cuts across the fairway some fifty yards shy of the green on this reachable three shot hole. Many a golfer â€œ both the tiger golfer and otherwise – is tempted to carry it with his second shot. The green is completely open in front to receive such a shot, almost as if Trent Jones is bating you into it. Too many architects would have put the green flush against the creek where the hole would accommodate only a high flying approach shot. Not so here. Sam Snead has always maintained a fondness for this hole.

One of the reasons Chanticleer is important to see and study is that it remains an untouched Trent Jones course. Other than a few drainage and flood issues, little has changed since it opened. In fact, Trent Jones toured Chanticleer a few years before his death in 2000 and said he forgot just how good this course was. He could only suggest two small alterations, which were indeed not carried out. His distinctive design features are found here and hopefully, the Club can resist any changes to this gem going forward.

Chanticleer epitomizes the best of a lean time and remains refreshing to play to this day. As Ron Whitten said in his Feature Interview on this site: ‘What’s wrong, I ask you, with the Jones style of that era? Too predictable? (Unlike Dye, Fazio or Nicklaus of today, who build their pet favorite holes ad nauseam?) Doesn’t demand shot-making? (Granted, it didn’t reward many bouncing balls, but it sure as hell did reward aerial shot making, especially high fades and draws. And it always rewarded a long straight ball. …It may be out of vogue these days, but so what. That’s what’s great about golf. You don’t like his stuff, go elsewhere! And he was so far ahead of the game with regard to the evolution of equipment and talent, we’re just now catching up. Long long tees (which he put in primarily for maintenance, by the way) are definitely needed if you want to make a course that some 20-year-old college bomber and I can both play. His multi-level greens still make sense to me. His use of water is still some of the best risk-reward stuff in the game. Don’t like his bunker left and right fairways? Hey, it certainly makes the long hitters think.’

As more and more multi-million dollar, high profile courses were built through the 1980s and 1990s, Chanticleer may have had its fair share of the spotlight momentarily deflected from it. But rest assured, as people begin to tire of the sameness of these new latest and greatest efforts, they will once again fully appreciate the far more engaging challenge on offer at Chanticleer.