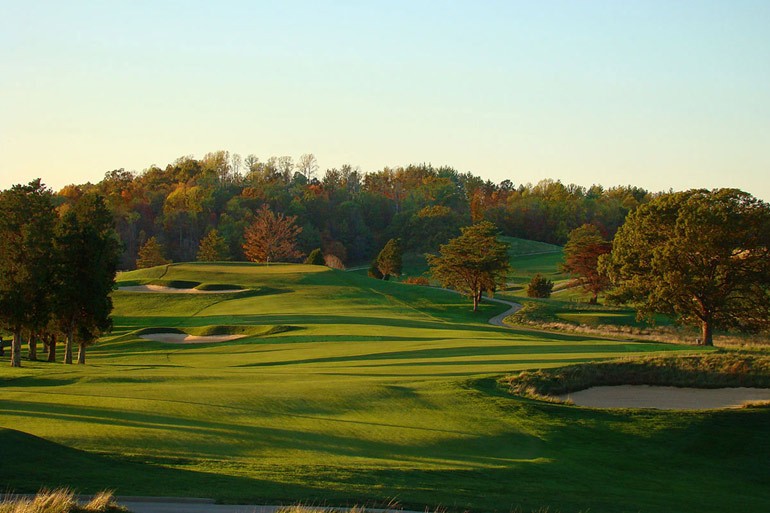 The French Lick Resort offers variety, be it the 1917 Donald Ross Course built during the Golden Age of Architecture or … 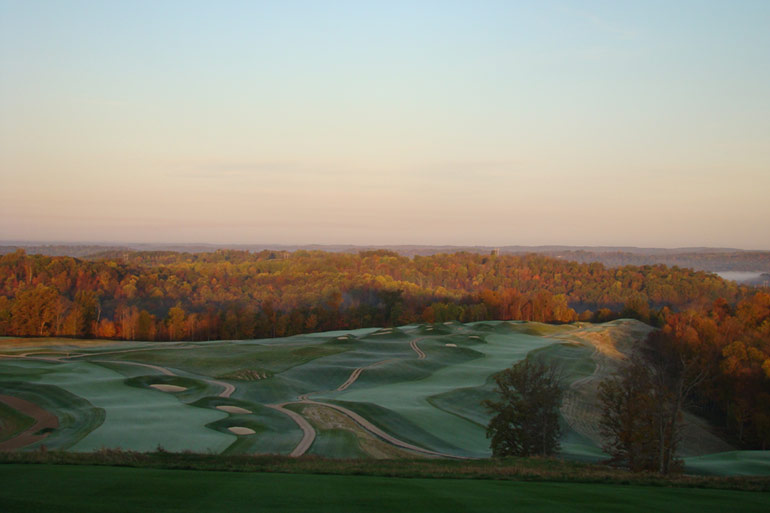 The story starts nearly 200 years ago when it was discovered that this part of the world contained the Pluto Mineral Springs. While the sulfurous smell can be strong, the mineral spring waters have long been held to deliver therapeutic benefits including the relief of stress and the easing of body aches and pains. ‘Taking waters’ was deemed so enriching that two competing hotels opened up in French Lick at the turn of the last century. One was the French Lick Springs Hotel founded by Thomas Taggert and the other was the West Baden Springs Hotel by Lee Sinclair.

People arriving by train had two historic hotels from which to choose. It is almost comical to think of two such grand resorts located in the tiny town of French Lick. It would be like the Greenbrier and The Homestead situated across the street from each other! To help draw people, Taggert commissioned Tom Bendelow to build an eighteen hole course in 1907. Nine holes of it exist today and it makes for the perfect warm up for a group arriving late in the afternoon. Taggert then hired Donald Ross nine years later to build a second course some two miles from the French Lick Springs Hotel. 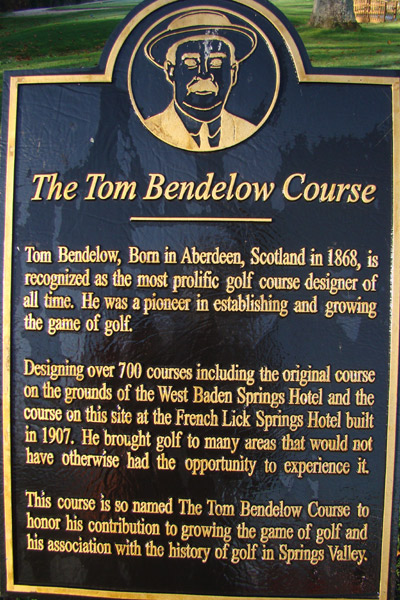 The going has not always been easy though. When the Great Depression hit, the West Baden Springs Hotel emptied almost overnight. The owner at the time closed it in 1932 and sold it to the Jesuits in 1934 for one dollar. Eventually, declining enrollment in their seminary college led them to sell it in 1964. Various owners tried their hand at it including a real estate development firm that went bankrupt before redeveloping it. The West Baden Springs Hotel was listed as a National Historic Landmark in 1987 yet it closed for safety reasons in 1989.

Enter Mr. Cook. Having made his fortune through innovations in minimally invasive medical devices including the coronary stent, he also had a great passion for architecture. He and his wife Gayle started CFC Properties for the sole purpose of renovating historic buildings including churches across Indiana. In particular, the downtown area of his adopted home town of Bloomington was revitalized, including the well known Grant Street Inn Bed and Breakfast.

In 1995 when visiting French Lick, he was so moved by what he saw that he decided to do something about it. Here was a man with hundreds of millions of dollars at his ready disposal whose inventions had saved tens of thousands of lives and he was galvanized into action. 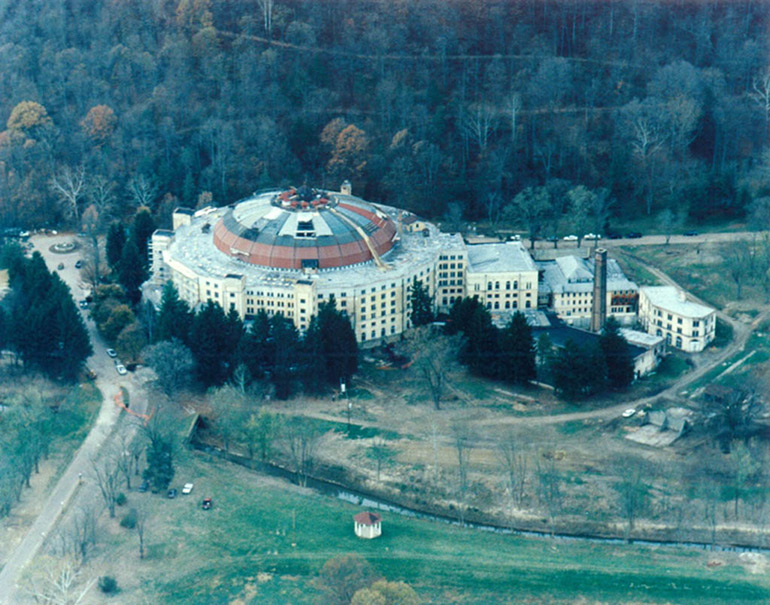 The heart breaks at this 1995 aerial of the dilapidated West Baden Springs Hotel. Why Lee Sinclair hired Harrison Albright, a 35 year old unknown architect from West Virginia, to build it in 1900 is unknown but his trust in Albright was amply rewarded. 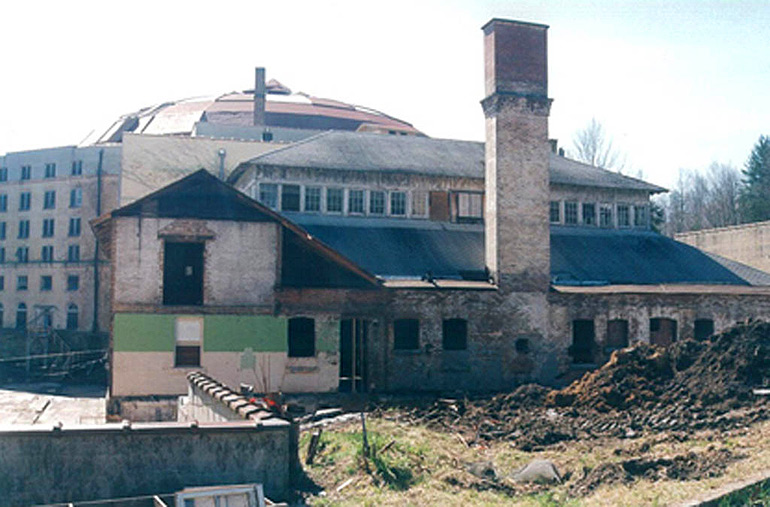 The halcyon days when the West Baden Springs Hotel was referred to as ‘the eighth wonder of the world’ were long gone in 1995. 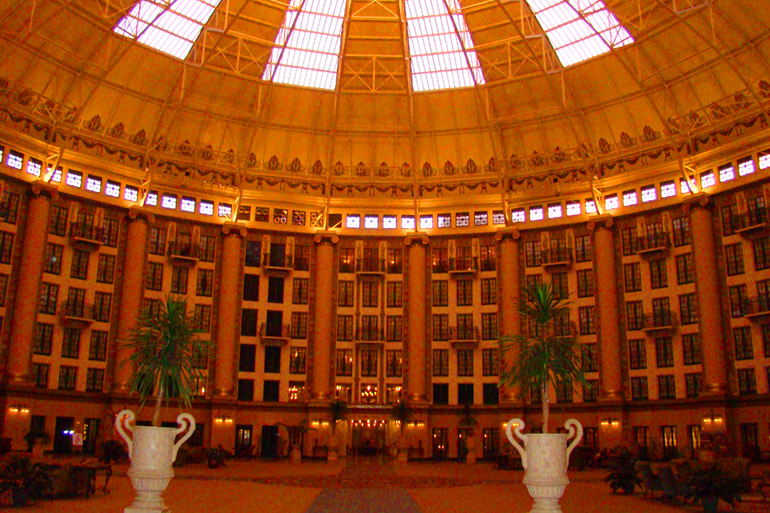 As photographed October, 2011, the six story domed inside of the West Baden Springs Hotel once again is awe inspiring. 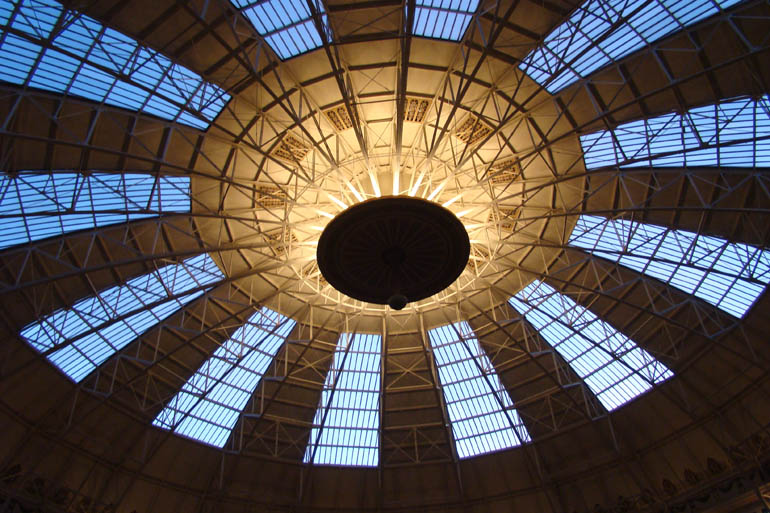 Visitors to West Baden Springs Hotel are actually encouraged to lay down on the floor and stare up through the dome whose dimensions are 200 ft x 100 ft. It was the largest free-spanning dome until the Houston Astrodome was built in the 1960s. 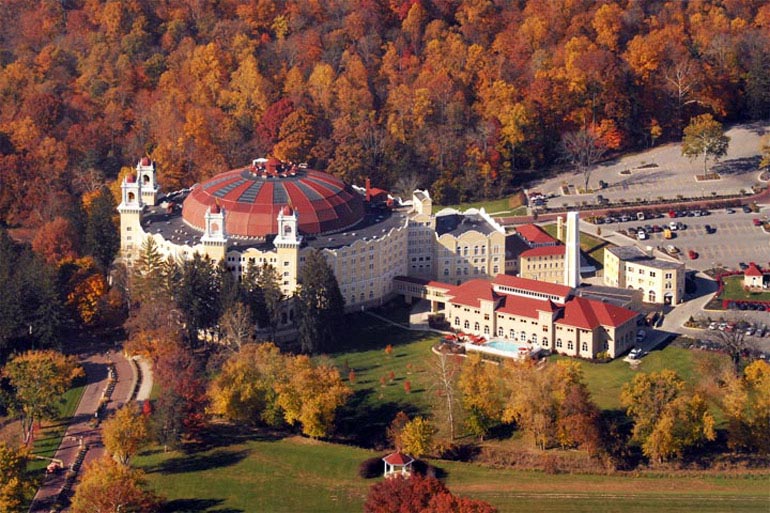 Restored to its full glory, The West Baden Springs Hotel once again stands as as an architectural marvel in the southern Indiana countryside.

Six years later, the two famous hotels had been faithfully restored. The cost to do it right was staggering but that was acceptable with Mr. Cook who wasn’t seeking a financial return on his investment. 686 hotel rooms were now available and he wanted people to come, see and enjoy these facilities. With this in mind, Mr. Cook made the decision to also build a casino and a second course to act as additional draws. While Jack Nicklaus, Arnold Palmer and Tom Fazio all tendered plans, it was hard to deny Pete Dye in his home state of Indiana. Initially, Dye walked the 400 acres atop Mount Airie and felt it unsuitable for building a course. However, he returned the next day with a far different mindset.

The resulting Pete Dye Course at the French Lick Resort is an engineering marvel. In stark contrast to the Ross course, this was a severe site and approximately 2,500,000 cubic yards (!) were moved during construction. The fairways are much narrower and the greens are smaller too than the Ross Course despite the fact that the course measures over 8,100 yards from the back markers. More so than any course with which the author is familiar, this is Dye’s ultimate rebuttal to the onslaught of technology.

Unlike the Ross Course which can be enjoyed by all level of players, the Dye course is target golf. You don’t angle for one side of the fairway for a better approach angle; you just try and find the fairway and avoid one of the 161 bunkers or six waste areas.

While as different as any two quality courses at any resort in the world, great – though different – fun is afforded at either. At the Ross, you are likely to finish the round with the same ball that you started. Not so at the Dye as a hook can put your ball off the side of Mount Airie on nearly half the holes. At the Ross, the key is getting your ball in the right position on the green relative to the hole location. At Dye, the key is just getting to the green without having already mangled your score. The Ross course is rife with strategic options throughout one’s round. Do you draw it around the dogleg at the eighth or play safe to the right? Do you try to get past the cross bunkers in two at the fifteenth or be content with a longer approach shot? Ross doesn’t dictate how you must play the holes. Pete Dye does by the fact that his fairways average only 29 yards in width.

The biggest decision that you make at the Dye Course occurs before you tee off: Which set of tees do you play? Several shots over par from the back markers is the norm for even a tour quality player like Indian native Jeff Overton. Dye’s slope rating of 148 from the back tapers down to 130 from the white tees. Most golfers will either play the blue tees at 6,700 yards or the white tees at 6,115. From there, they should hit plenty of three woods and therefore enough fairways to manage effectively their ball around the course. Like Oakmont or Royal County Down, there is deep satisfaction in a well played round where so much trouble abounds.

In the end, two very different design styles compete. The price points of the two are different as well. The Ross Course typically offers green fees around $100 while the Dye course commands $350, which is the highest green fee in the Midwest. In a typical year, five times more players play the Ross course than the Dye. Rarely does the Dye course see more than forty players in a day.

Perhaps you don’t want to pay $350 for any round of golf? That’s fine. Just play the Ross Course. Apart from Pinehurst No. 2 and Pebble Beach, it may well be the best Golden Age golf course tied to a resort in the United States. Still, the Dye Course offers a unique day and that’s just what the owners want. Don’t just come, play golf and leave. What a waste of the facilities that would be. Taggert’s mansion and its stone terraced porches afford breathtaking long views. Take your time, soak in the environment and you’ll make a day that won’t be soon forgotten. The pro shop and its immediate environs at the Dye Course join the ones at Mount Juliet in Ireland and Skibo in Scotland as among the most charming and coziest with which the author is familiar. 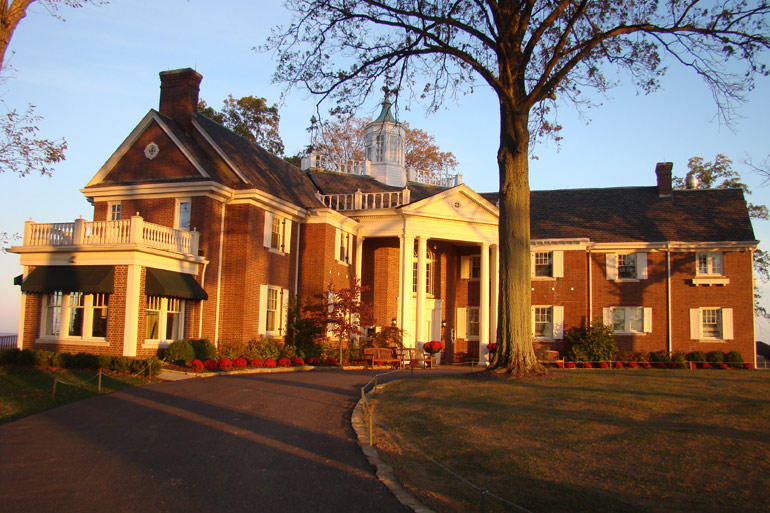 Thomas Taggert’s mansion atop Mount Airie now serves as the clubhouse for the Pete Dye Course. 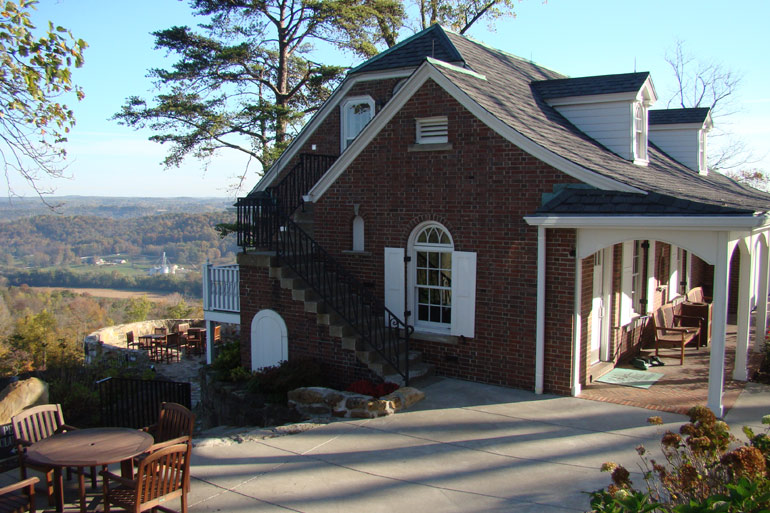 In a stroke of genius, the former maid’s quarters now serves as the golf professional shop. 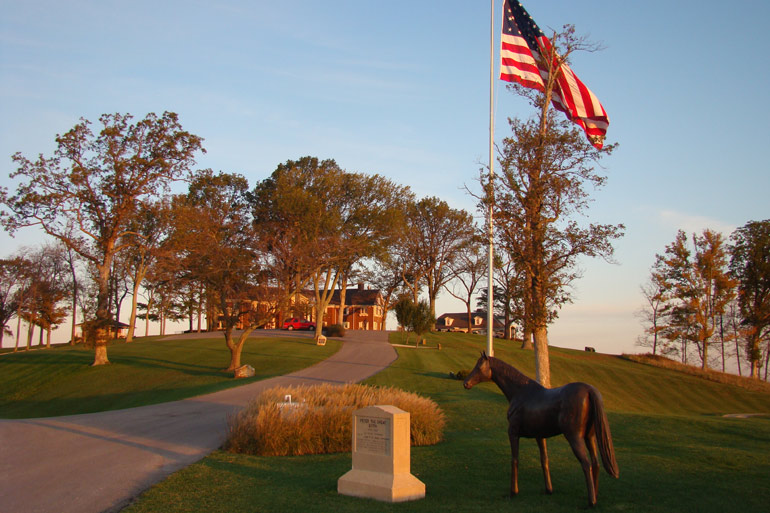 Taggert’s prized trotting horse Peter the Great is in the foreground. 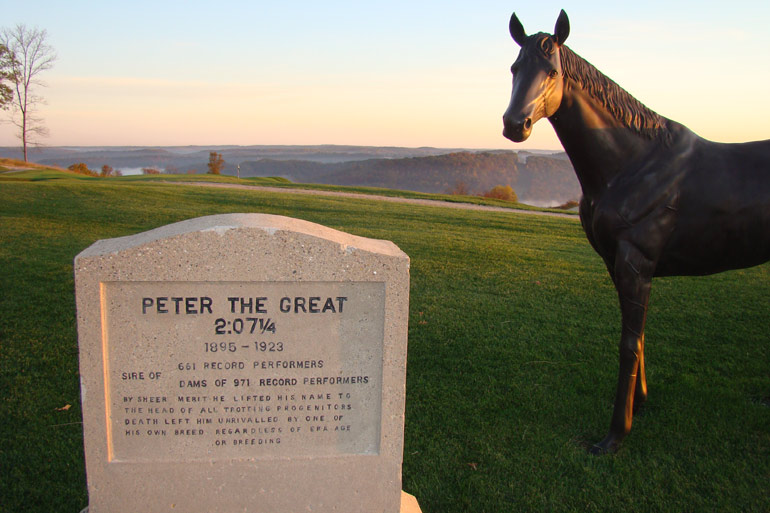 Taggert bought Peter the Great in 1917 for the unheard of amount of $50,000. Peter became great by obliterating every trotting record imaginable and then sirring countless offspring of high quality. His remains are buried on Mount Airie.

At $28,000,000 to construct, the Pete Dye Course is a lot of things: Spectacular, memorable, unique. What it isn’t is a model for the future course construction as that kind of debt load would sink most courses, be them for resort or private play. Still, by freely spending his money, Mr. Cook has provided the visitor to the French Lick Resort with options that would otherwise not exist. Should the guest stay in the larger French Lick Springs Hotel which is a bee hive of activity with the adjacent casino? Or should he elect to stay in the more elegant West Baden Springs Hotel? After warming up on the Bendelow course, how should  he divide his time between the Ross course with its Golden Age playing characteristics and the Dye course with its modern design elements? The problem of such decisions is a good one indeed.

After all was completed, between the two hotels, the casino, the 45 holes of golf, infrastructure costs and restoring the Taggert mansion, Mr. Cook spent upwards of $500,000,000. There is no such thing as a financial return on that kind of an investment. That’s ok. Mr. Cook left a lasting legacy behind. The French Lick Resort has no debt and is profitable (and therefore sustainable), despite the tepid economic climate prevalent since 2008. 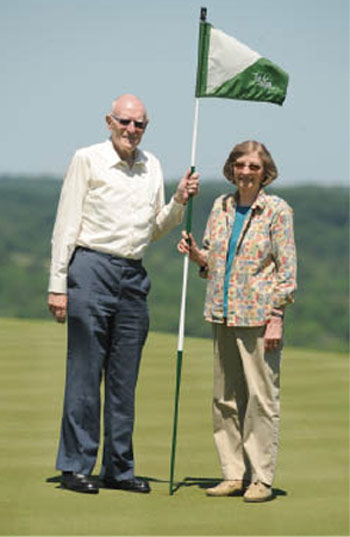 Upon his death on April 15th, 2011, the president of the Cook Group told the 10,000 employees that Cook’s legacy would be that ‘he knew the ultimate gift is to give and not receive – to not even think about receiving or care about receiving.’ Steve Ferguson, chairman of the Cook Group, noted that ‘Few men have ever touched as many lives, saved as many lives, as Bill Cook and the company he created.’ Every visitor smart enough to visit this part of the world will happily attest to these two statements.