A golf course is generally the result of a combination of efforts from the developer, the architect, his crew and the superintendent through to the usual army of investors, bankers, and lawyers. The European Club is fortunate not to have pandered to so many mixed interests; rather, it is the creation of one man.

Pat Ruddy, an accomplished golf writer, had dabbled in architecture before with St. Margaret’s, just north of Dublin. However, in the back of his mind he had a dream of building his own course. And despite the awarding of the 2005 Ryder Cup to the K-Club, any Irishman worth his salt is going to want to build a links course. This time, Ruddy was going to do everything his way. 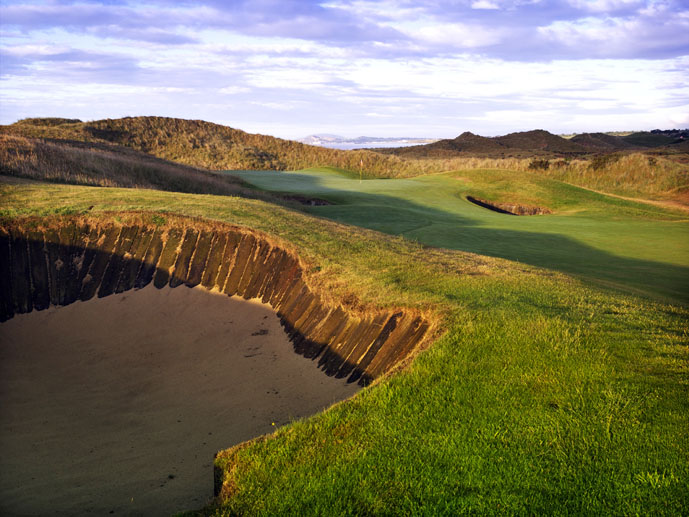 Of course, building a golf course can be overwhelming, financially and otherwise, to one person. He has to find the land, purchase it, often haggle with the government over environmental concerns, design the course and then build it. The clubhouse, etc. follows from there.

There are two ways to tackle such a project: (1) to build the course quickly through the investment of a lot of money or (2) to take your time. The first option is desirable for financial reasons: the sooner the course opens, the sooner players will be paying to play it. However, such a course of action often leaves the end result not quite ‘right.’ With The European Club, located on a terrific dunesland stretch on the Irish Sea some 45 minutes south of Dublin, Ruddy took the latter tact.

Going into the project Ruddy had no false expectations — he knew that the course would not be perfect the day it opened. His goal from the beginning has always been long term. He wanted a near-ideal course in twenty years, knowing that he had time to help the course ‘evolve,’ just as every notable links course in the British Isles has done. As Donald Ross spent much of the latter part of his life tinkering with his beloved Pinehurst No. 2, so plans Ruddy with The European Club.

The two most photographed holes are the 8th and 17th. They truly look, to borrow the worn out expression, like they have always been there. However, many architects could have found these holes. A greater compliment to Ruddy is the other holes. Unlike every other links course in Ireland, this one lacks an indifferent stretch of holes. Ruddy’s time of wandering the course for several years until the routing was just right is what guarantees the long standing success of The European Club. There is a great lesson to be learned there.

Third hole, 470 yards; A downhill par five with a stunning panorama from the tee. The hole fits the eye perfectly and plays equally well into or downwind. The hole gets progressively narrow until the golfer arrives at the green complex, which is the most interesting one on the course. It has a left-to-right slope that is the natural effect of being cut into the hillside. The smartly placed bunkers at the front corners of the green are enough to the side to allow for the player to bounce the ball into the green. Finally, there is a sinister one hidden from view on the right side where the ball seems to want to finish.

Tenth hole, 395 yards; Strong start to the inward half with much strategic merit. To be afforded a view of the green on the approach, the tee shot must be within eight yards of the center of the fairway. Otherwise, the flanking dunes leave a blind shot. Furthermore, the angled, right-to-left sloping green is especially difficult to hold from the right side of the fairway.

Twelfth hole, 400 yards; This par four plays along the Irish Sea. From high above the fairway, the tee is perched on a dune giving the golfer sweeping views down the coast. Ruddy preserved the natural tumbling aspects of the fairway. His real trick was leaving a ridge thirty yards short of the green; golfers are forever fooled into thinking the green is much closer than it actually is.

Thirteenth hole, 530 yards; An example of a hole Ruddy has improved over time. Originally the tee was to the right of the 12th green, making for a straightforward hole of no great merit.

Ruddy subsequently moved the tee one hundred yards to the left. Now, the player plays his tee shot out toward the sea before turning left and following the shore to the green. Obviously, it is always appealing to have the sea as a backdrop to a full shot. More importantly, the dogleg allows the better player to seek a shorter way home. The last 100 yards is at it should be on a hole of this length, with deep bunkers on either side of the fairway.

Fifteenth hole, 370 yards; This uphill, dogleg left is one of the few holes where the player would consider not playing driver off the tee as the landing area is tightly pinched by a bunker on the left and the sea on the right. Given the right wind conditions, the better players can risk carrying the bunker off the tee. The green is perched on the edge of a 50-foot cliff, with the sea on the player’s right. This is a most dramatic green site but it comes with a price – the green is exposed and so close to the sea that it is difficult to keep healthy turf. Yet, the authors contend that the course is better for the green being perched on the Irish Sea than perhaps a more cautious selection.

Any description of The European Club must mention its one controversial hole: the 18th. There is a small pond that guards the front and left side of the green. Like most pairs who play the course, the authors are divided on the hole. One considers the pond an aberration as it is not consistent with the rest of the course and out of character with links golf in general. The other author believes the pond does belong, as the area had been a small bog. The pond does not look artificial and its edges are soft, with weeds growing out of the water. You decide, but don’t spend too much time; many other of the holes deserve the real attention.

A final point deserves mention: two new short holes (between the 7th and 8th and the 12th and 13th holes) have been built to serve as relief holes when other holes need to be closed for maintenance purposes. This concept is strangely overlooked these days. Having one or two extra holes that can be easily worked into the routing is a tremendous luxury, ensuring that necessary work can be done to the course while still allowing golfers to play eighteen quality holes. The two extra holes at The European Club are simple in that only the tee and green need to be maintained — no bunkers or maintained rough to worry about. As the original course has only three short holes, the player will not feel ‘cheated’ at having to play one or two others. In fact, the holes look so interesting when walking by them that the player is tempted to play all 20 holes!

The European Club has been a win-win since its inception. From a design point of view, Ruddy took his time and maximised what the land had to offer while at the same time getting the little points right. But in addition, The European Club has been a financial wonder as well. Since purchasing the property in 1987, building the course, opening the course in 1992 and maintaining it through 1998, the entire outlay has been a modest 4.5 million Irish pounds or roughly US$7,000,000. Compare that to some architects’ fees or the new 5th hole at Pebble Beach!

Ruddy almost goes out of his way to keep you from taking your round too seriously. The score card is peppered with admonitions such as ‘Stay awake — get around in 4-hours – you are an athlete!’ to ‘ Do not be a links lawyer. Play the ball as it lies when possible.’ and a box reserved for ‘What my score should have been.’ After all, golf is a game to be enjoyed. And there are few more enjoyable spots than among the dunes of Brittas Bay.