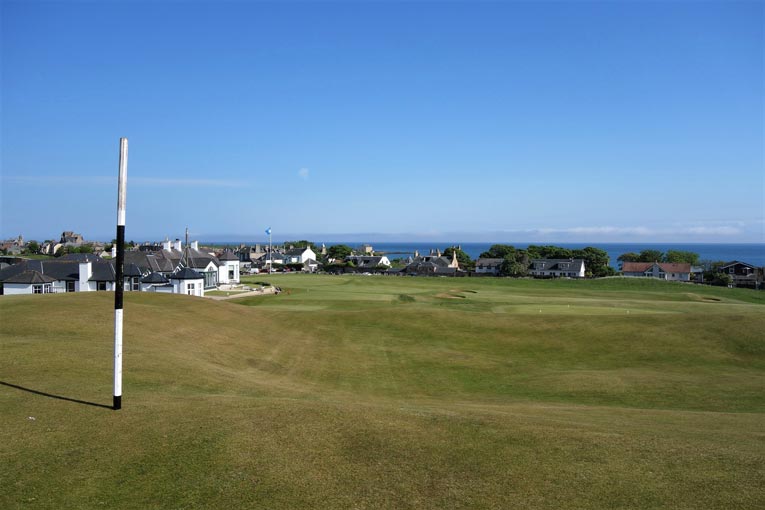 This view back down the 1st fairway hints at the compelling setting of this 6,250-yard coastal village gem.

Certain playing characteristics define links golf. Fast running fescue fairways, the need to judge the pitch and run of the ball, handling awkward stances, and learning to flight the ball in shifting winds head the list. Elie, located ten miles south of St. Andrews, is one links that does all that in spades.

The course as presented on the scorecard seems ‘get-able’ at 6,235 yards. Further study shows that distance is against a tight par of 70. Additionally, there are no three-shot holes for the tiger to beat up on and just two one-shotters. What there are are par fours – sixteen of them to be exact. A couple are very long, three of them may be drivable by the low marker, and the rest are in the pleasant medium range. The highest compliment is that a player does not appreciate the inordinate number of two-shotters until someone points it out after the round. 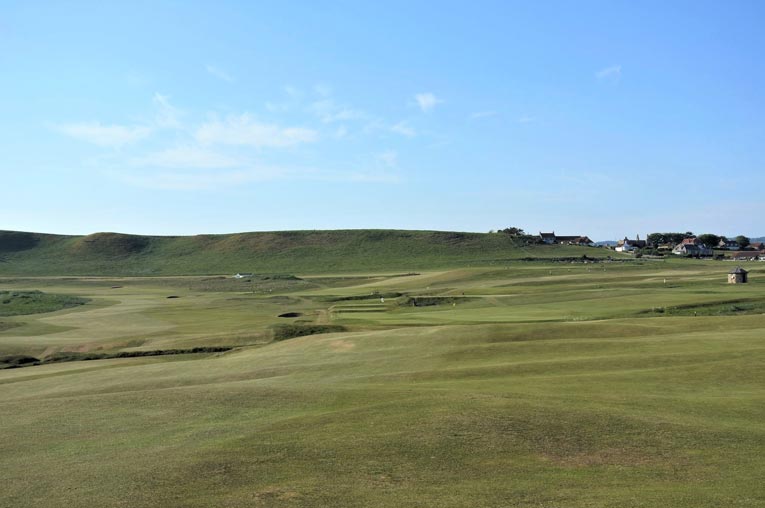 Short grass abounds at Elie. Little time is wasted hunting for golf balls and a typical round is enjoyed in 3 hours.

As is typical of a Scottish membership with a high golf I.Q., no earnest attempt has been made to lengthen the course or alter the holes to conform to a more standard ‘par’. Old Tom Morris created the course’s backbone when he turned the course into an eighteen-holer in 1896. Significant work followed by James Braid in the 1920s, leaving us essentially the course we play today. Morris and Briad would be mightily impressed by the bouncy-bounce nature of today’s tight fescue playing surfaces and otherwise, they would absolutely recognize today’s course. 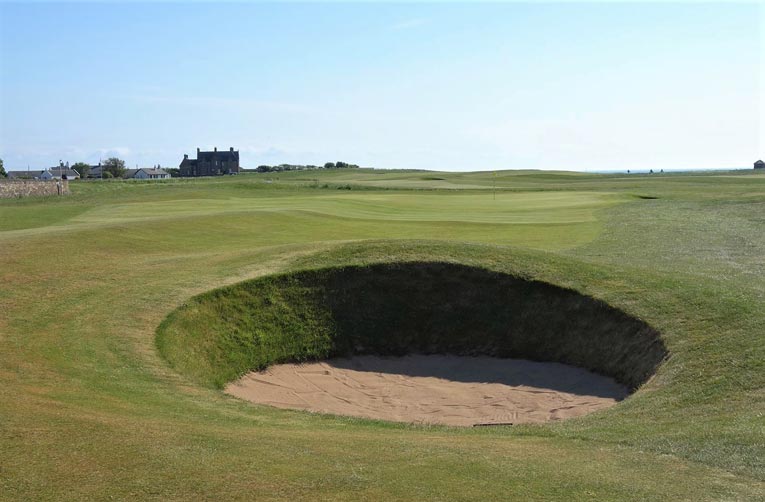 Note the seamless manner in which the spine feeds from the fairway well into the putting surface at the 4th.

Apart from the first and last several holes, the holes are laid out on a broad plain that slopes gently down to the Firth of Forth. There are no sand dunes to speak of; rather the holes enjoy a clean simplicity. However, there are plenty of small-scale undulations, such as the excellent crumpled fairways of the fourth and fifth, to hold the player’s interest.  Add in judicious – though penal – pot bunkering and a plethora of greens that slope from front to back and you have a links that poses fascinating questions of skill and judgement.

First hole, 420 yards, Stacks; Look no further than this famous opener to know that Elie embraces the eccentricities of Scottish golf. A thirty-foot hill looms directly off the tee. The player has no idea when to hit, save for the fact that a periscope from a submarine has been placed nearby. Talk about different!  A blind shot of such magnitude is unheard of in other countries, especially for an opening tee shot. And yet… what a rousing start to see your tee ball sail over the hill. 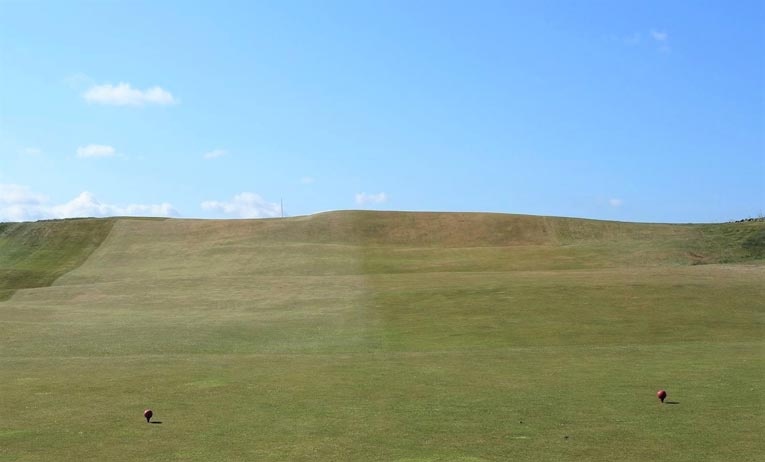 No modern architect would have the guts to say, “Yes, this will do nicely for a first tee.” 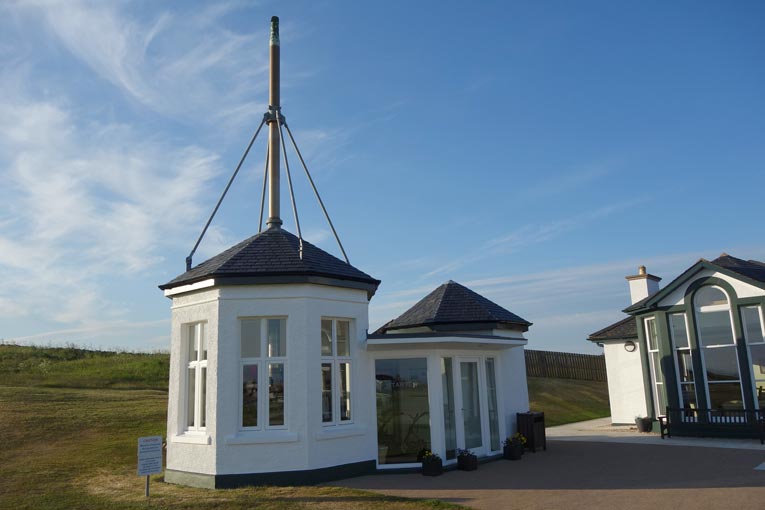 Second hole, 285 yards, High Hole; Aptly named, the hole plays uphill to a skyline green with a flag fluttering in the breeze. Any perched green in a windy environment can be prickly, and this one proves no exception. 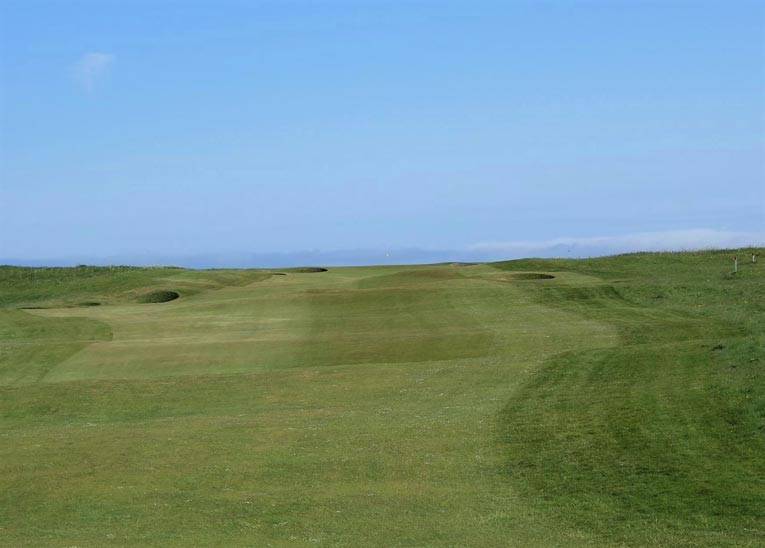 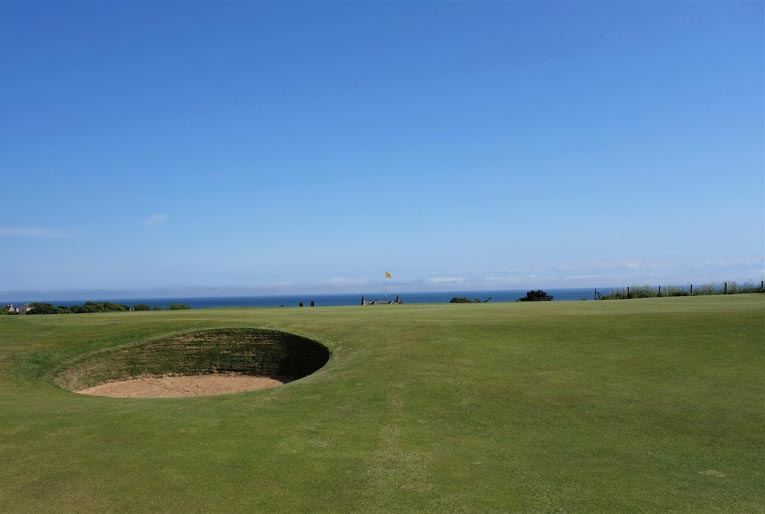 … hitting and holding this plateau green requires a fine, crisp approach. The lack of mounding is refreshing.

Third hole, 215 yards, Wickets; A highly regarded one-shotter, the third features an elevated tee that provides sweeping view over the course and out to sea. The drop in elevation creates confusion in the golfer’s mind, especially with two bunkers fronting either side of the green and out of bounds just a few paces beyond. Judging the effect of both the wind and the elevation change is no mean feat so early in the round. 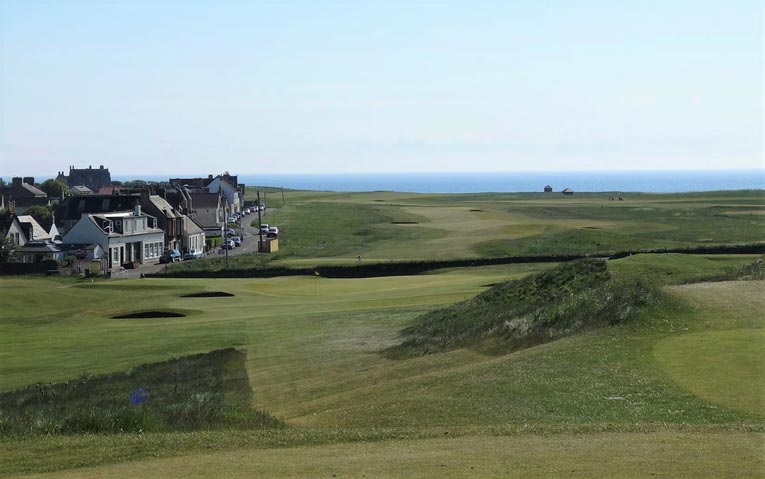 The right to left sloping ground in front of the green combines with the bunker placement to give the player fits. 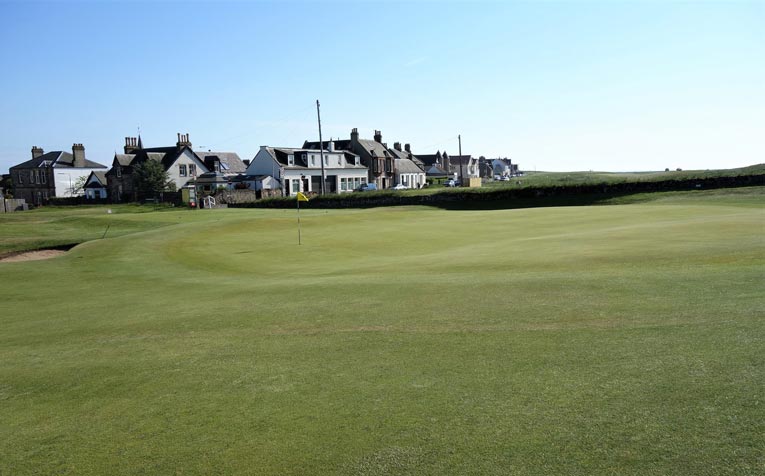 A closer inspection of the day’s hole location shows various ways to work a ball close. Without question, the ground game is king at Elie.

Eighth hole, 380 yards, Neuk; Golf at its highest form is about variety with links such as North Berwick and Prestwick famously providing obstacles from stonewalls to sleeper bunkers. Here at the eighth, a road is put to maximum effect as it is incorporated in a diagonal manner across the playing corridor. 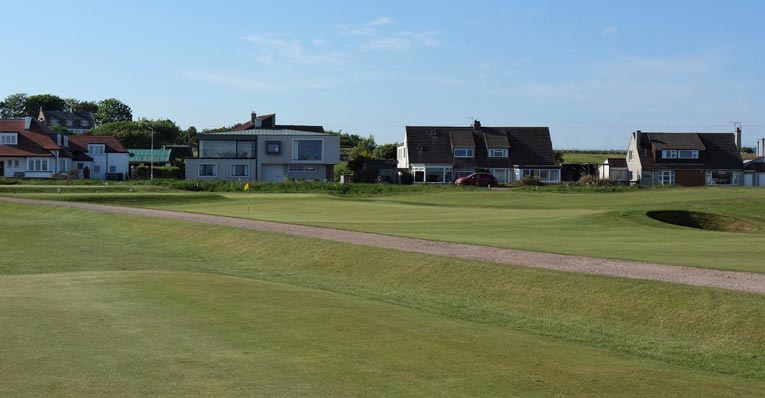 Not your average challenge, nor your typical recovery shot should your ball stay on the road.

Ninth hole, 440 yards, Martin’s Bay; The hardest hole on the course, this long two-shotter heads directly toward the Firth of Forth and generally plays into the prevailing wind. Four bunkers crowd in the fairway at the 240-yard mark. A good drive is imperative as another two bunkers lie on either side of the fairway 80 yards short of the green. By now, the player realizes he is well on his way to hitting every club in his bag. 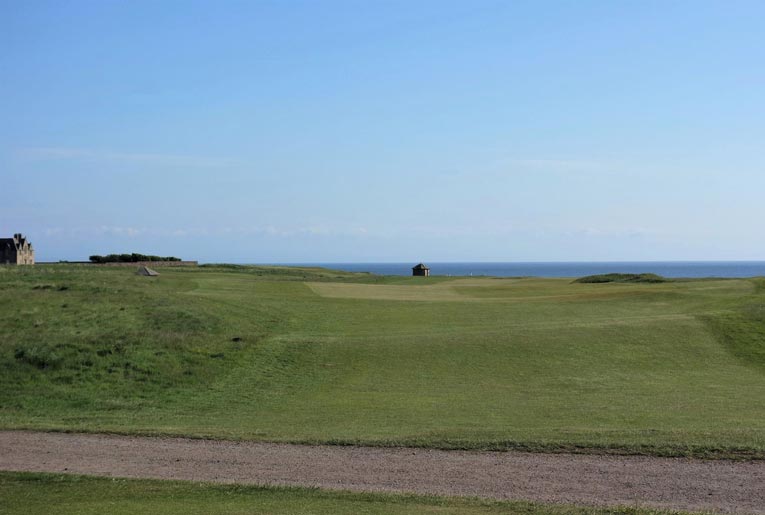 The brawny ninth as seen from the tee… 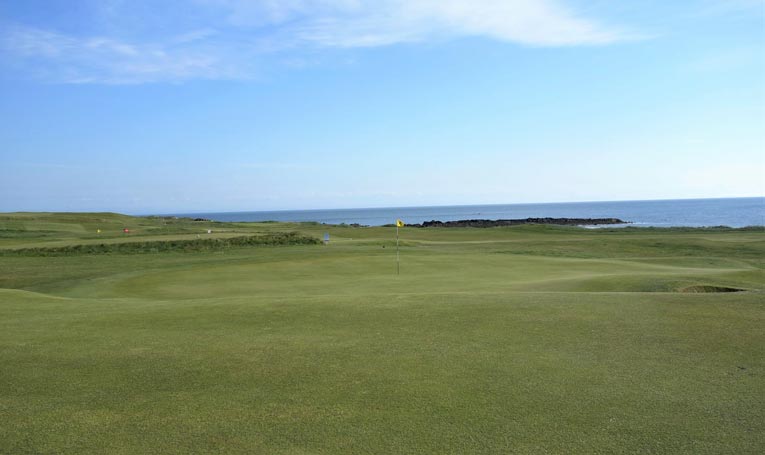 … concludes with an approach to a sunken green. The sight of the flag silhouetted against the Firth from +/- 200 yards emphasizes the course’s seaside qualities.

Tenth hole, 265 yards, Lundar Law; The start of the second nine has the golfer head toward the edge of the peninsula. Not that you would know it standing on the tee as a hillock blocks the view. Many compelling holes exist where the high point is in the middle of the hole. Yet, in modern architecture, often the tee or green or both occupy the high spot(s). More is the pity when architects settle into comfortable routines but at Elie, the holes hit the landforms in every conceivable manner. 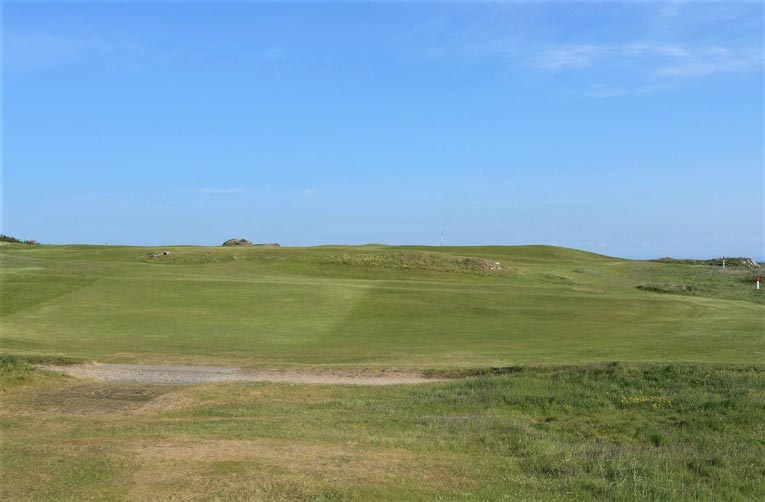 Though the green over the brow of the hill may be within reach, the blind aspect from the 10th tee creates uncertainty, which rarely yields the best swing. 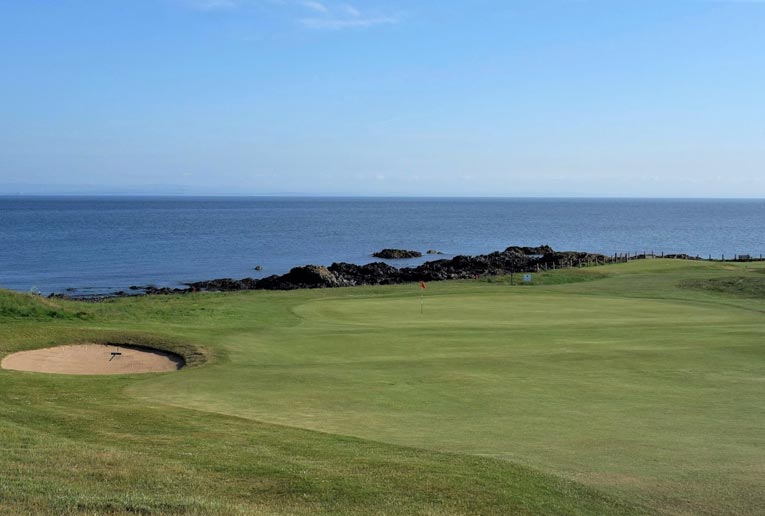 The 10th green is wider than deep, but the player is unable to deduce from the tee which side of the green the hole is located. 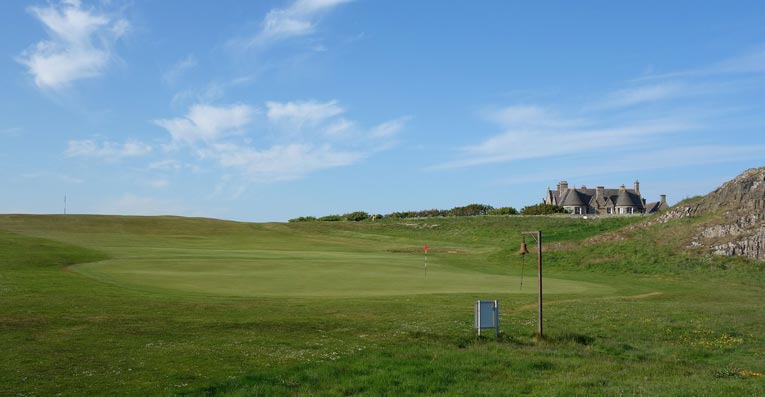 As seen from behind, tee shots readily bound downhill and onto the open putting surface. As at St. Andrews, sometimes the shrewd play is to go beyond the hole so that the next shot is uphill. Elie’s numerous fallaway greens are the star of the show as they create so much acute playing interest.

Twelfth hole, 465 yards, Bents; Overshadowed by the glories of the next hole, the twelfth wraps left around the rocky shoreline. A bunker on the outside of the dogleg is placed in a perfectly awkward position. meaning it is located where the golfer would often like to go. With the wind blowing from the left off the Firth, the player is tempted to save time and drop a ball in the bunker as avoiding it from the tee seems unlikely! Conversely, on a still day, the bunker serves as the ideal directional target for a drawn tee ball. 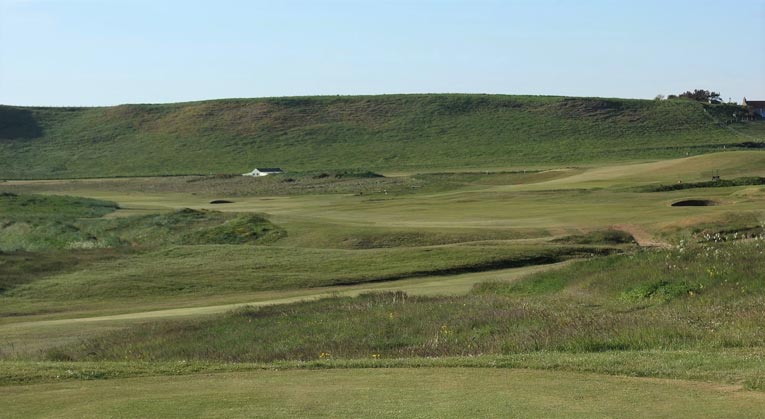 A noble, timeless hole that should be better known.

Thirteenth hole, 380 yards, Croupie; James Braid called it ‘The finest hole in the country,’ yet it is debatable if it is even the best hole on the course! Regardless, the thirteenth is indeed of exception and features a rarity in early designs – a diagonal green. The putting surface occupies a narrow, long shelf some fifteen feet above the fairway and is angled away from the golfer to the left, measuring 44 paces from front right to back left. Without doubt, the sight of a drawn approach shot that lands on the front portion and releases toward the back left hole locations is one to cherish for a lifetime. 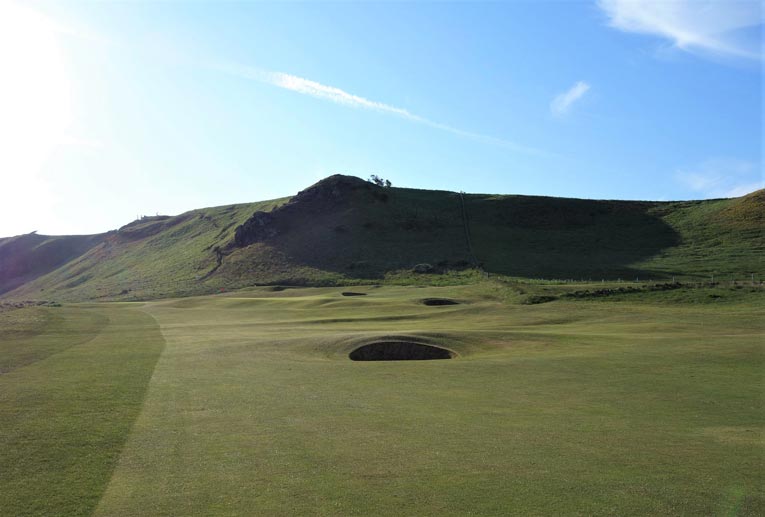 The appealing, elevated target is seen ahead but there is no reaching it if one finds this well-placed central hazard. 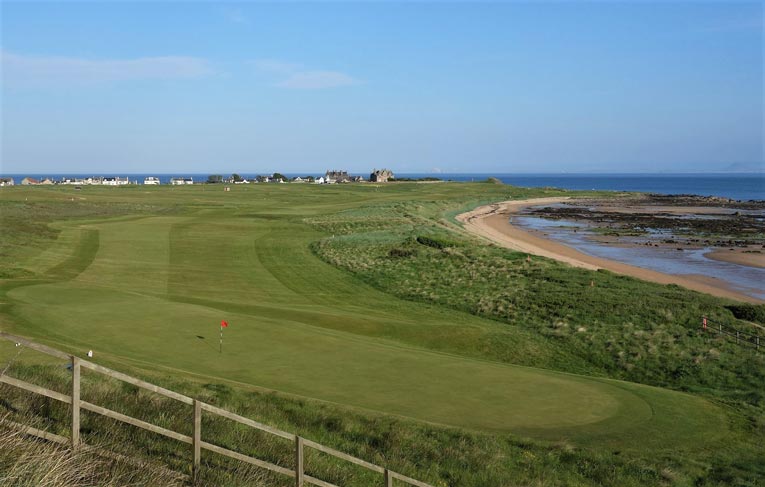 The undeniable charms of Elie are on full display in this famous view from behind its angled 13th green.

Eighteenth hole, 360 yards, Home; There is a sense of coming home and back into the village of Earlsferry. The home green is framed right and behind by the members cars, so your golf ball needs to stay on its best behavior to the very end. 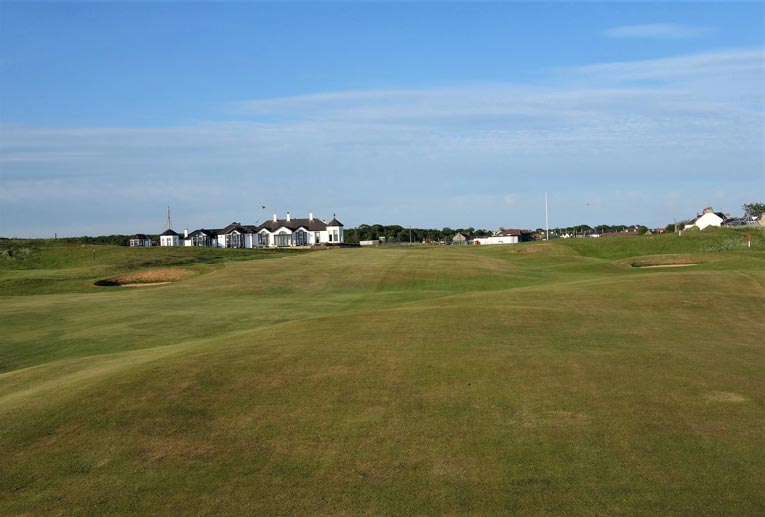 As was Morris’s penchant from time to time, this tee ball plays diagonally across another hole (in this case, the third). Note the fine fairway contours and the ideal, firm playing conditions.

Elie doesn’t occupy a large swath of land, nor does it feature billowing dunes. Still, this low-profile design enjoys a coastal setting at the edge of a village and the stage is wonderfully set for a man vs. nature tussle. Short grass dominates and the interaction of the ball along the ground in and around these clever greens provides the playing interest of the sort that one would never tire.

One day the wind is howling across the links and a single marker is grateful to break 80. Or perhaps the player finds the course on a calm summer eve and enjoys a flattering round? Either way, the golfer leaves happy and fully satisfied, likely with ~45 minutes in additional free time than if he had played elsewhere. For many, including the author, nothing beats this kind of intimate coastal village golf experience. 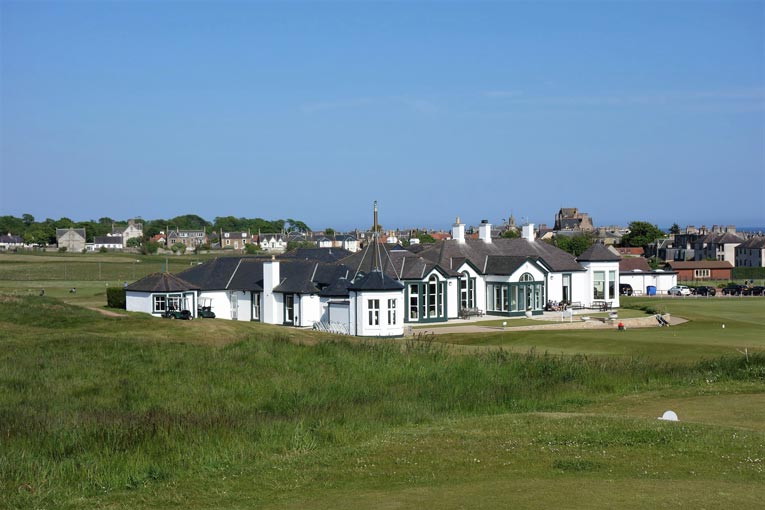 Elie’s handsome clubhouse punctuates a fine day on the links.

The author sincerely thanks John Mayhugh for the use of his photographs throughout this profile.