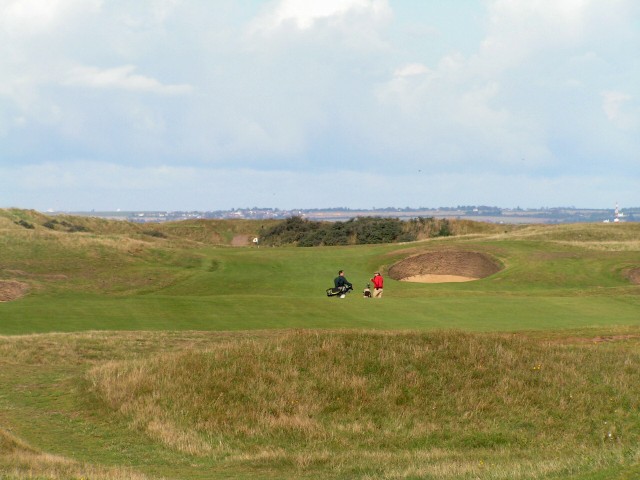 Perfection for many a golfer – rolling topography, crisp turf, a club or two wind and clear skies. Pictured above is the third at Deal.

One reason why golf is such an endlessly fascinating game is that the venue changes, unlike many other sports. Some golf courses that are even in close physical proximity still have totally different features and playing characteristics. Take Shinnecock Hills and Maidstone on Long Island in the United States. Shinnecock is set across an enormous amount of acreage and enjoys a huge sense of scale. The landscape is homogeneous. Maidstone, thirty minutes away by car, is a far more intimate routing as it is on half the property of Shinnecock. Though smaller, the property is more diverse with its most famous holes set among coastal dunes. Some golfers prefer the vastness of Shinnecock; others prefer the variety and cleverness of Maidstone.

Similarly, Royal St. George’s Golf Club in Kent along the English Channel has long been appreciated for its enormous scale. Without doubt, it is the biggest feeling course on the Open rota and is the largest scale course in England. Ten minutes to the south by car is Royal Cinque Ports Golf Club. Set on a more human scale, Deal has attracted an equal amount of glowing comments as the bigger St. George’s. 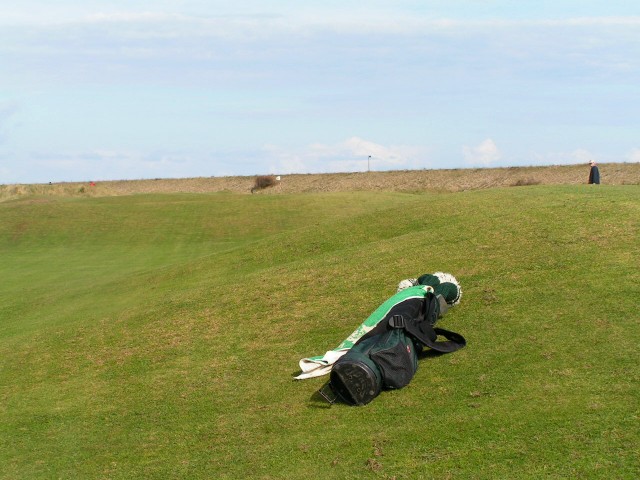 Though not dramatic, the rippling landscape at Deal possesses ideal qualities for golf. This picture is from the middle of the second fairway.

Club Historian David Dobby details how Deal evolved over its first 100 plus years and through two World Wars in his Feature Interview on this site. In short, Harry Hunter, who was the club’s first Head Professional and Green Keeper gets credit for both the club’s original 9 holes and then its expansion to 18 holes for the 1909 Open. A who’s who of golf course architects have since performed work at Deal including James Braid right after World War I. Then Major Sir Guy Campbell, Hugh Alison, John S. F. Morrison, and Major C. K. Hutchison were involved with the course in the World War II time frame. Finally, in recent years, Donald Steel has consulted on bunker and tee placement.

Of those names, Harry Hunter’s is certainly the least known and yet he deserves credit for today’s 3rd, 16th and 17th holes, which many consider to be Deal’s three most fascinating holes. In addition, though refinements have taken place, these holes were built in the 1890s, which is to say pre-Haskell ball. As Ralph Livingston notes in his Feature Interview on this site, the pre-1900 implements are radically different than the 1920s hickory clubs and balls with which golfers of today might identify. In fact, the performance of the pre-1900 clubs and balls are so significantly different, one was to wonder if Hunter would have designed the holes in the same manner had he commenced during the Haskell age. For that matter, would any great architect have had the courage to build a punchbowl green like the one that Hunter created at the 3rd? Orto build such a wild green atop a plateau as at the 16th? Like such one-of-a-kind pre-1900 holes as The Alps at Prestwick or the Road Hole at St. Andrews, golf course architecture is infinitely richer for what Hunter did. And to the credi tof all the consulting architects that since followed at Deal, none have diminished nor altered the innovative and arresting nature of these stand out holes.

For an excellent hole by hole description, please refer to Noel Freeman’s article entitled Deal Me In! found in the In My Opinion section of this web site.

Third hole, 510 yards; A wonderful half par hole, highlighting the crumpled landscape upon which Deal sits. No where on this hole are the dunes more than ten feet high, yet the hole is every bit as exhilarating as any of the holes though the massive dunes at Royal St. George’s. Sadly, irrigation systems have led to the demise of many punchbowl green complexes around the United Kingdom but fortunately not at Deal. The challenge remains to get the ball into the basin in as few a shots as possible. Any shot that stays just outside leaves a very tricky recovery to the tiered green below. Approaching the 3rd green, the golfer wonders if his ball a) made it into the basin and b) how close is it to the day’s hole location. This sense of suspense surely beats the instant certainty present on many modern courses where everything is in view and ‘fair’. After all, golf is a game and games are supposed to be fun. The 3rd green complex is but one example of why golf at Deal is so much fun. 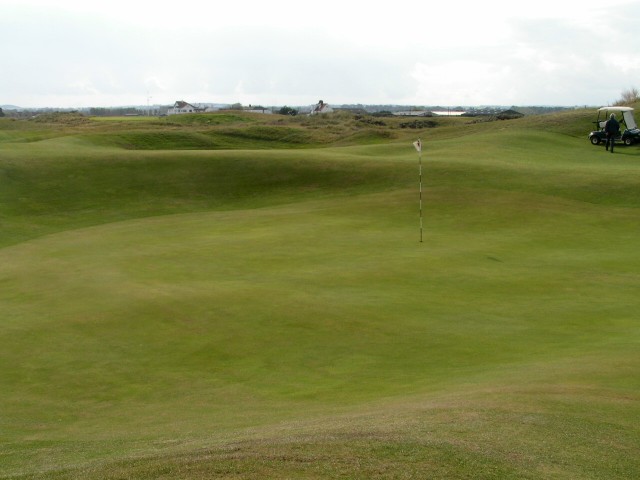 The punchbowl third green, as seen from behind, is bunkerless with the ground contours providing its highly engaging golf qualities.

Forth hole, 150yards; Though some traditionalist lament the passing of the original blind Sandy Parlour, few would argue that today’s 4thisn’t a very fine hole in its own right. In contrast with the heavily bunkered one shot 8th, this green is bunkerless. The green is domed and the effective hitting area must surely be less than3,000 square feet, no mean target in the ever present wind. A great example too of where more length would only lessen a hole: better to keep it this length and make the golfer figure out how to keep the ball down and out of the wind. 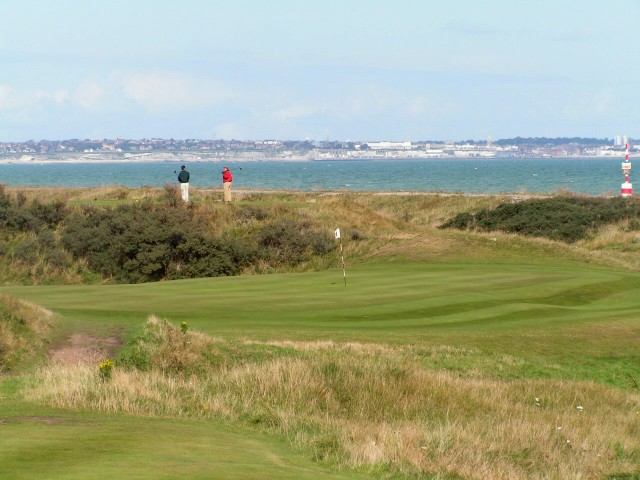 Morrison’s bunkerless green angles from front left to back right and shrugs balls off on all sides.

Sixth hole, 325 yards; Great short two shotters help make a course great. Put another way, there is no such thing as a great course that doesn’t have at least on every fine short two shotter (sorry Bethpage Black!). Technology has made this hole all the more engaging to play as assuming the prevailing south west wind behind and over one’s left shoulder, the tiger might be convinced to have a crack at the green off the tee. For the third time in the first six holes, the golfer faces a bunkerless green, which like the 3rd and 4th ones, is full of character. 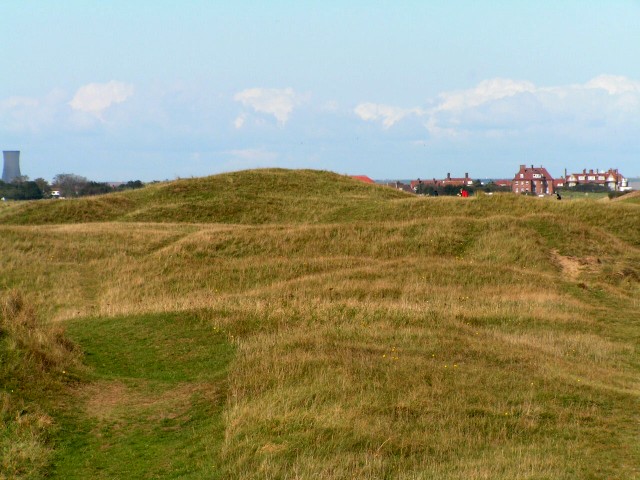 The fairway is left toward the tower and the green is right along the dune line with a player in red standing on it. A carry of 260 yards over the high point in the dune would leave the golfer a mere flick to the green. 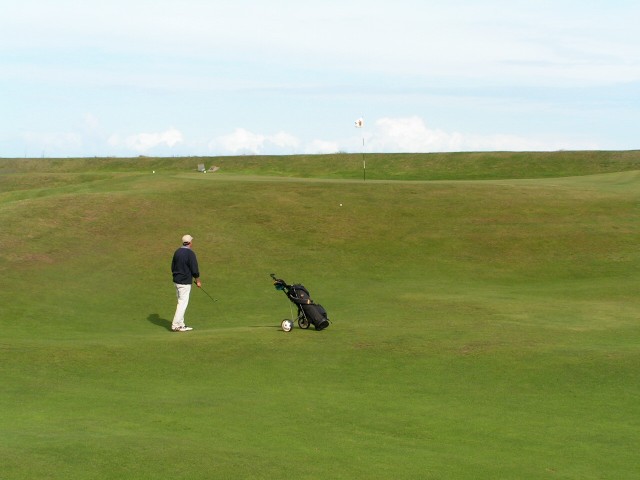 However, the sixth putting surface sits atop a plateau, the nine foot bank of which is very good at returning chip shots back to the golfer’s feet, as the man above is in the process of finding out.

Eighth hole, 165 yards; Set perpendicular to the general north-south direction of the holes nearer the clubhouse, this is the first time the golfer sees the wind from this direction. The golfer might therefore hope for a bit of room but, alas, with nine bunkers, this green complex is the most heavily bunkered on the course. 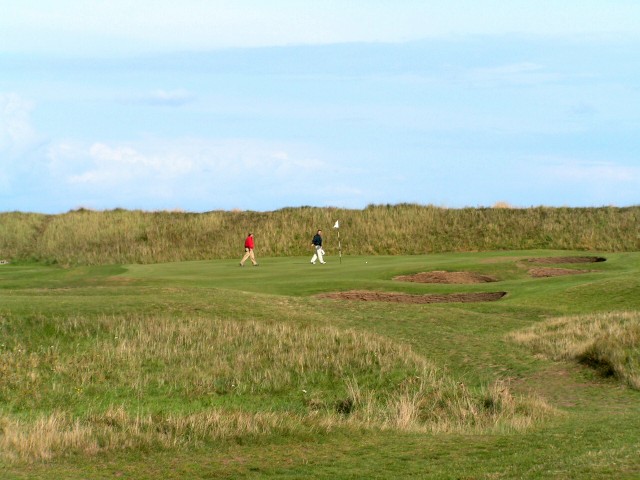 The seawall is the backdrop to the eighth green. 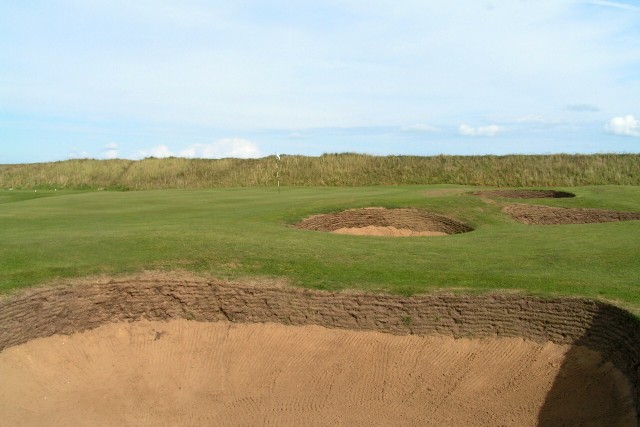 Tightly guarded, the golfer often times has to contend with a right to left crosswind. The player with the skill to hold a fade against the wind relishes the opportunity to showcase his skills.

Tenth hole, 365 yards; According to David Dobby, James Braid added the 8th through the 12th holes in preparation for the 1920 Open. These holes occupy the flatter portion of the property with less natural features with which to work. To Braid’s credit, he created holes of lasting interest, with this one being particularly clever. The green is set at an oblique angle to the tee with a seven foot deep depression being used to maximum effect as shown below. 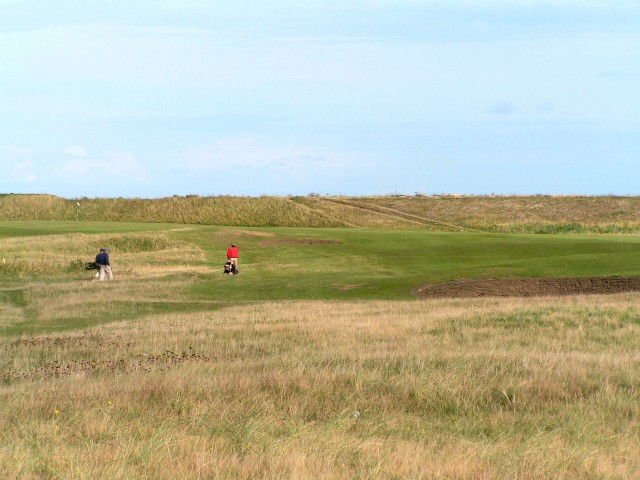 The view from near the tenth tee: the lure of the flag left (over the golfer in navy) pulls the golfer that way but the ideal angle of approach to this angled green is from long down the right side. 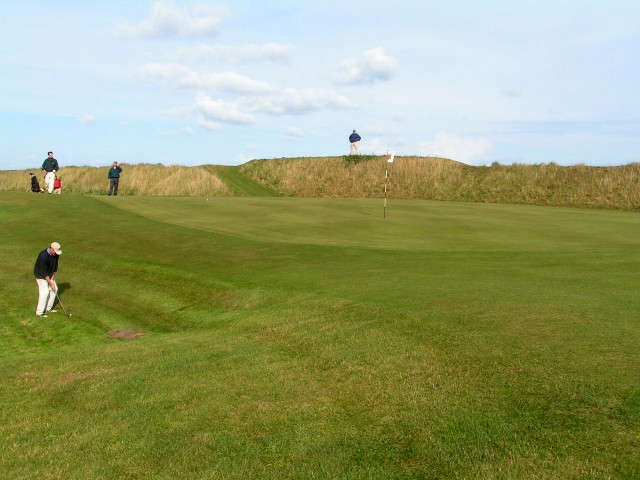 This approach to the tenth at one time was within ten feet of the day’s hole location, before rolling down into the depression. 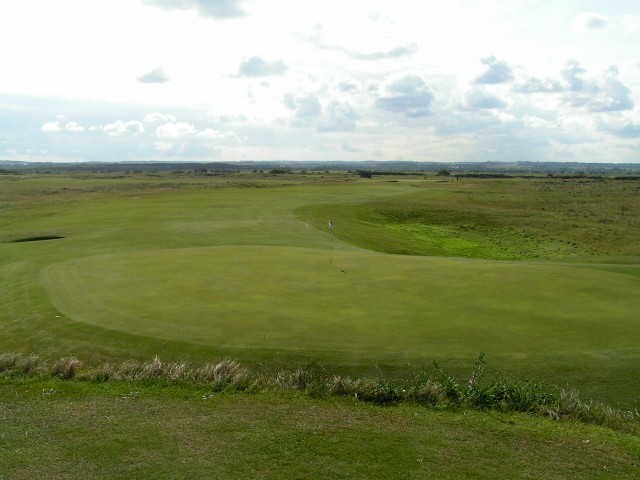 The view back down the tenth as seen from standing on the seawall shows the ideal angle into the green is from the right side of the fairway.

Twelfth hole, 450 yards; Deal’s famous finish begins here, with the hole being made by Braid’s unique ‘u’ shaped green complex. Though the flattest hole on the course, how could any golfer ever tire of hitting to such an attractive green sunk as it is between two ridges? 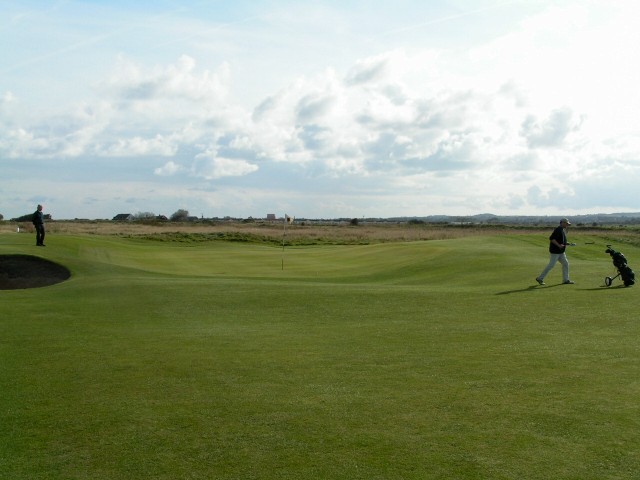 Deal’s green complexes are both varied and many are one-of-a-kind. Take the twelfth for instance: no reason to get in the bunker left as the green’s right slopes work the ball nicely onto the long putting surface.