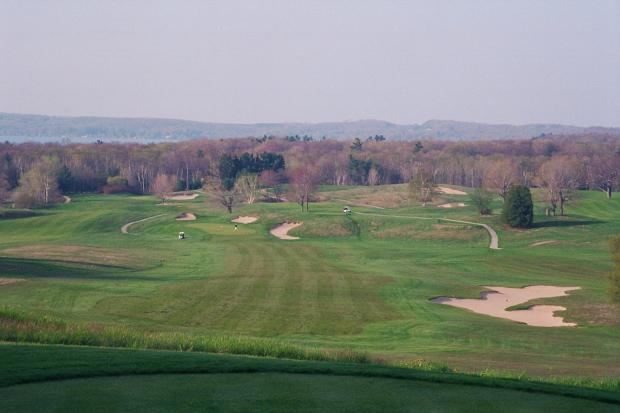 The 1st tee at Crystal Downs affords the golfer one of the game’s great views. The green is straightahead, benched into the dune with three bunkers on it. As with every green complex here, the golfer must know where to miss it and in this case, that’s short of the green in line with the green’s length.

When the Maxwell/MacKenzie greens are combined with these other natural features, an unusually testing layout is the result, despite the scorecardshowing acourse that barely measures 6,500 yards.

To appreciate the challenge of the course, the golfer needs to start with the greens. Fred Muller, the long time professional at Crystal Downs, has seen someone putt off every green at least twice. The pitch on greens like the 2nd or 11th isalmost staggeringas there is in excess of six feet (!) of fall from back to front. The contouring of greens like the 5th and 16th holes is frightening, especially whenone seesthe first puttslide into agreenside bunker. Collectively, the greens at Crystal Downs surely rival those at Oakmont as the most intimidating in golf. 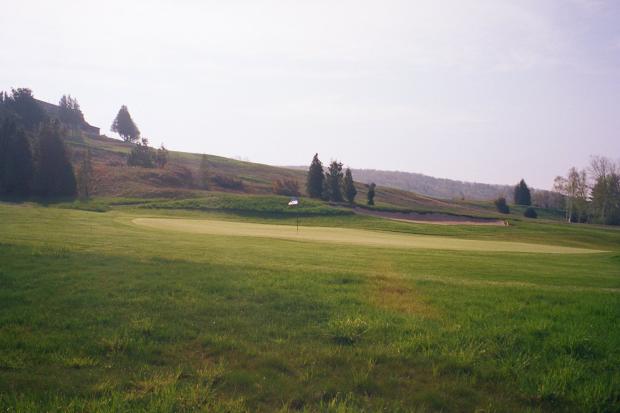 The back to front tilt of the 2nd green is evident as one walks past it to the 3rd green. Unfortunately, by then, it may be too late for a first time visitor to realize the importance of staying below the hole at the 2nd. 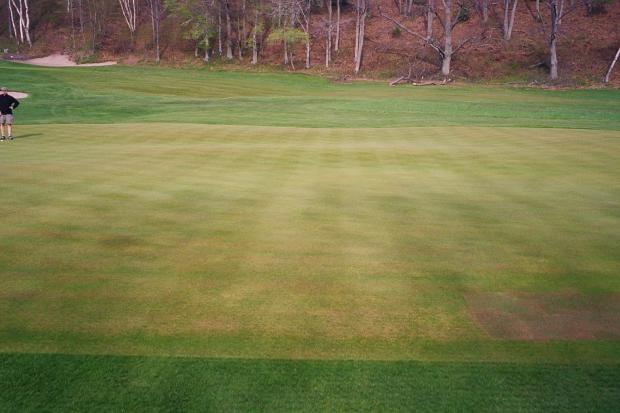 The double punchbowl 6th green takes some knowing. At 7,700 square feet, it is the largest on the course.

But the key to Crystal Downs’ appeal lies in the fact that the greens are not just an exercise in fear – they are plain fun. Take the ‘L’ shaped 7th green. Unlike virtually all such greens built since, this one works because of Maxwell’s attention to the contouring. From far back left the golfer can use the bank in front of the green to swing the ball toward the front right hole locations. The same applies to back left hole positions as well – from the front right, the knowing golfer can bank the ball off the contours for a satisfactory result.

Less dramatic but equally effective is 15th green. A subtle knoll in the left middle of the small green thwarts many birdie attempts on this short two shotter. This kind of sophistication in and around the green complexes only results when the architect lives on site and can take the time to get it right. And, of course, that is exactly what Maxwell did at Crystal Downs (and guess what? It is also what Henry and William Fownes did at Oakmont).

Even without the greens, Crystal Downs with its English style clubhouse perched on a bluff overlooking Lake Michigan with viewsover to Crystal Lake is an inspiring place. The fescue coupled with the dramatic bunkering gives the course a rich texture generally not found in the United States where parkland courses dominate. The rough compliments the bunkering to form the strategy on a number of holes. For instance, if the golfer takes on the bunker in the crook of the dogleg right 4th hole, he has the optimal angle into agreen which best accepts a run up shot from its right front. However, if the golfer shies away from this bunker, his tee balleither goes through the fairway and into the tall stuff and/or his approach angle progressively gets tougher. 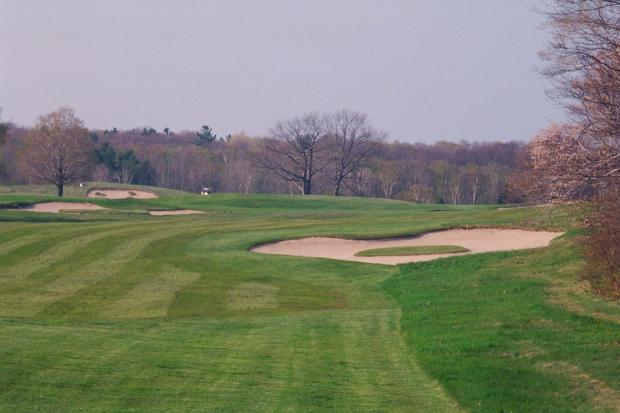 A fade off the 4th tee around the bunker cut into the ridge sets up the best approach angle.

First hole, 460 yards; The stunning view helps the golfer not give up all hope. The hole looks and plays like a brute. The length, the green, the wind, nothing helps get the round off to a smooth start. The effect on a card and pencil golfer is immensely interesting. Like Wannamoisett, the golfer needs to hang on – allwill bewell if he doesn’t disintegrate after the first four holes. Even on theinfrequent occasionwhen the1st is downwind, a five is a fine start.

Fifth hole, 355 yards; There it is, you figure it out. Four golfers could well hit four different clubs off the tee. When an unconventional hole is done well, it remains forever ‘fresh’ as the golfer continually tries to unlock its secrets (see The Old Course at St. Andrews). 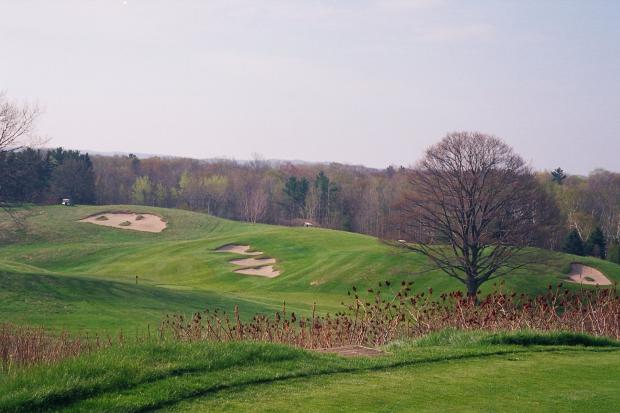 Does one go right of the tree, over the tree, over the Three Sisters bunkers, or lay up left of them? All options appear open to the golfer but the left to right tilt of the green dictates a play in from the right side of the fairway. 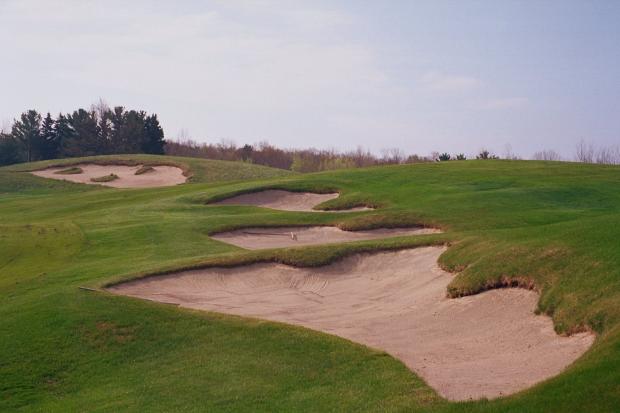 A closer look at the famous Three Sisters bunkering on the hillside of the 5th fairway.

Seventh hole, 330 yards; The four short two shot holes at Crystal Downs that measure under 360 yards (the 5th, here at the 7th, the 15th, and the 17th) have withstood theadvances of technology as well as any set of holes worldwide. In the case of the 7th, the fairway runs out 215 yards from the tee. The golfer can lay back and have a clear wedge approach to the green or he can blast his drive into the bottom of the gulley from where he will have a blind pitch. In this case, though, the boomerang green places emphasis on the golfer seeing the shot, and for that reason, the author can only imagine laying back off the tee many more times than not. The unique boomerang 7th green functions quite well as the golfer who uses his imagination can get reasonably close from one part of the green to the other.

Eighth hole, 550 yards; A tumbling hole that doglegs right up a hill to a green placed on a ledge,its lumpy fairway never treats anyone to great favors but it does dictate the way. If the golfer can place his second shot long down the right side of the fairway, he is rewarded with an approach more on the same level as the green. From the left side, the approach shot is both distinctively more up hill and from a worse angle. Any weak approach shot to this green is guaranteed to roll ten to twenty yards back toward the golfer. Some consider this both MacKenzie’s and Maxwell’s finest three shotter. 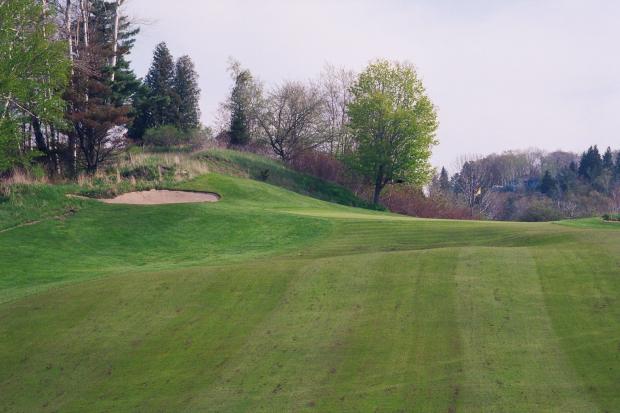 The brilliant placement of the green atop a ledge makes the 8th hole a truly special three shotter.

Twelfth hole, 430 yards; Played across the most level property on the course, the green makes the hole as it slopes from front to back. Given that the hole generally plays downwind,those familiar with the courseunderstand to use the ground shy of the greenand run the ball onto the open green. 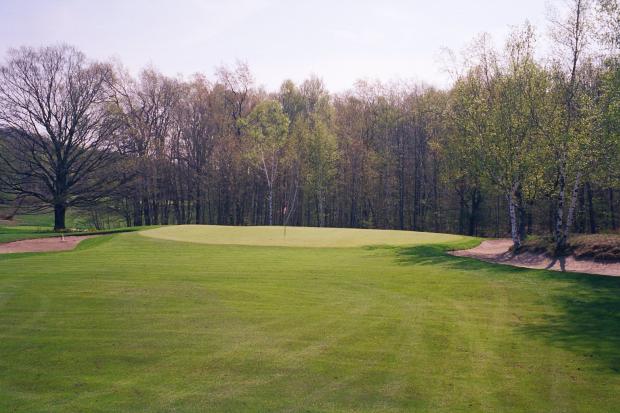 Bouncing a ball onto the 12th is the best play. The hole’s benign appearance makes it a very underappreciated hole but its golf qualities are as high as any other hole on the course.

Thirteenth hole, 440 yards; As improbable of hitting the green in two as the 13th at Prestwick Golf Club in Scotland,the greenwould not be built today, as people would cry unfair. It is high in front and drops off to a bowl back right. Still, unlike many modern greens, the golfer can picture what he is supposed to do from the fairway. Hitting a cut shot that catches the slope of the terrain in front and chases back toward the flag might be the most satisfying shot on the course. 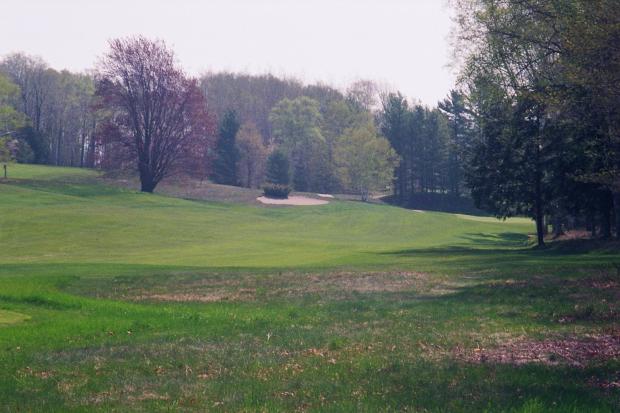 As viewed from the tee, the 13th green follows the strong slope of the land from left to right.

Fourteenth hole, 140 yards; A wonderful compliment to the mugging at the 13th, this charming little holeplays to the smallest green (3,800 square feet) on the course. 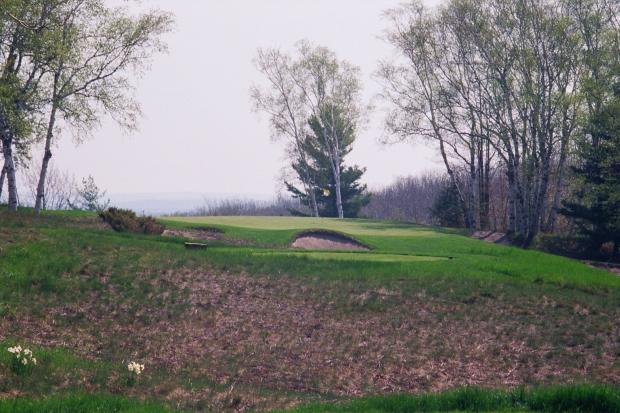 In recent times, the Club wisely removed the trees and brush from behind the 14th. Now both the wind and the views of Sleeping Bear enhance the playing of the hole. 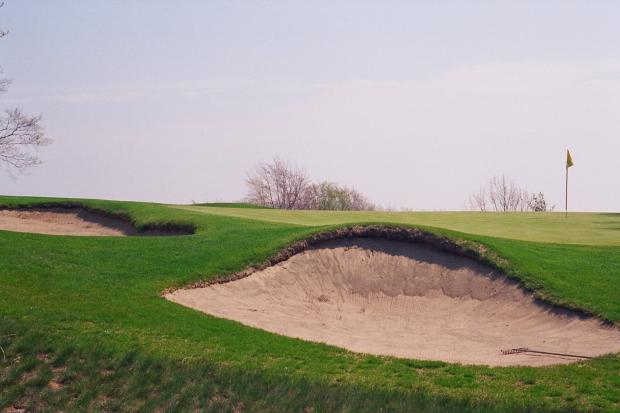 The 14th green is subtle – a putt to a back hole location is not as uphill as one might guess from this picture. The back portion of the green is actually fairly level.

Fifteenth hole, 320 yards; The back nine isroughly out and back and starting with the 15th tee ball, the golfer is likely to play the next several holes into the wind. Situatedovermore gently rolling terrain than many of the land forms on the front nine, the ideal drive leaves the golfer a level stance atop a hillock some 100 yards from the green. The 15th fairway features 5- 8 foot rolls before arriving at the small-ish green, which falls away on all sides. Unlike the longest two shotters on the back (the 12th and 13th), the architects didn’t provide any help to the golfer in having his ball gather onto the green.

Seventeenth hole, 310 yards; Far from a classic,the 17this scintillating nonetheless. The golfer has to figure how to place his ball in a right to left sloping fairway (that almost doesn’t exist, let’s face it). A 25-mph wind blowing up the chute of trees makes the shot harder than the golfermay wish at this point in his match. 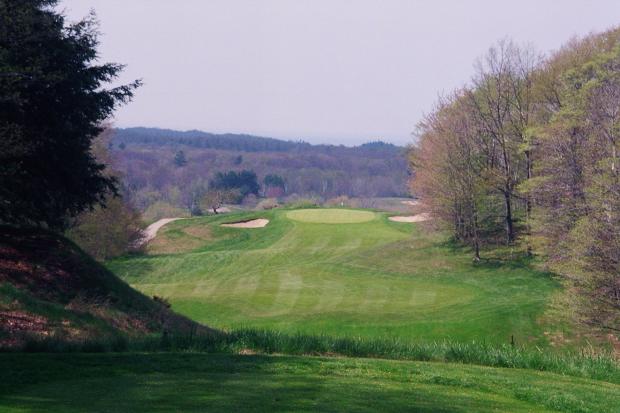 Looking down the 17th to the tiny green. Though the tee shot is the more dramatic shot, the pitch to the horizon green is almost as nerve-wracking.

The two sides at Crystal Downs are of distinctly different character, with the front on open, tumbling land and the back through the trees. However, this course fares much better than other famous Jekyll and Hyde courses like Spyglass Hill. The short 11th hole is a wonderful introduction into the wooded nature of the next six holes while the exposed 17th green is an inspiring re-introduction to the more open landscape.

Crystal Downs is one of a coupledozen courses in the world that combines an inspiring setting with first class architecture. Those who know it best don’t clearly prefer any other course to it in part because they feel like they learn something new each and everytime they play it. And that isa very short list of courses for which the same can be said.