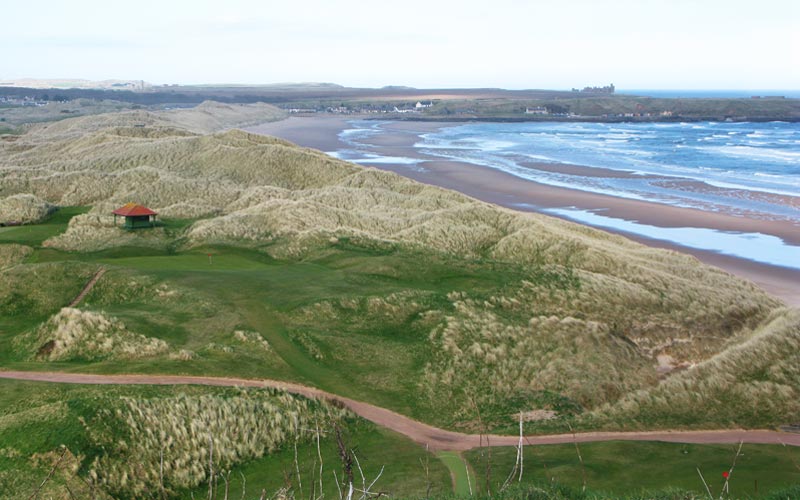 After World War II, many architects started to use a ‘formula’ for designing their courses, based to a degree on their perception of Augusta National. For example, the course should be a par 72, evenly divided so that each side consists of five par fours, two par threes and two par fives. Holes of consecutive par should be avoided in the name of ‘variety.’ Each side should return to the clubhouse. There shouldn’t be any blind shots, etc.

To achieve this standardisation (and can the reader think of any less admirable goal?) much earth was moved, ponds created, mountains leveled and the most ‘state of the art’ construction and agronomic elements were employed. So much for letting the land dictate the course!

Wind the clock back eighty years. Tom Simpson arrives at Cruden Bay north of Aberdeen on the east coast of Scotland. He finds this incredibly convoluted piece of linksland. What to do?  Crucially, he builds a series of holes that meander all over the place. Some are pure linksland in character, one is on top of a ridge, one is in a bowl, one falls off a ridge and others are sandwiched between the ridge and the North Sea. There are blind shots, consecutive par threes, and two drivable par fours.

The result? A course that inspires golfers the world over not only to come here for the first time but for many subsequent return games as well. By letting the land dictate the course, Simpson came up with an absolute winning ‘formula.’ He delivered on what Tom Doak points out is the most basic element of good routing: that the holes follow the same path a person would take if he were to walk the property before the course was built.

Without a doubt, the routing is the star at Cruden Bay as it yields some world class golf holes without any weak links. The stretch of holes from the fourth through the eighth is as fundamentally sound and appealing as any stretch of holes in Scotland. Indeed, the course in some ways is surprisingly straightforward given the nature of its heaving dunescape. Yes, some critics are quick to dismiss the bathtub green at the fourteenth and the blind one shot fifteenth as ‘quirky’ but that obscures how fundamentally sound the vast majority of the holes really are.

Forth hole, 185 yards; The first time one sees the hole in its own setting beside a fishing village is one of the great thrills in golf as the player feels he has just discovered a little country. 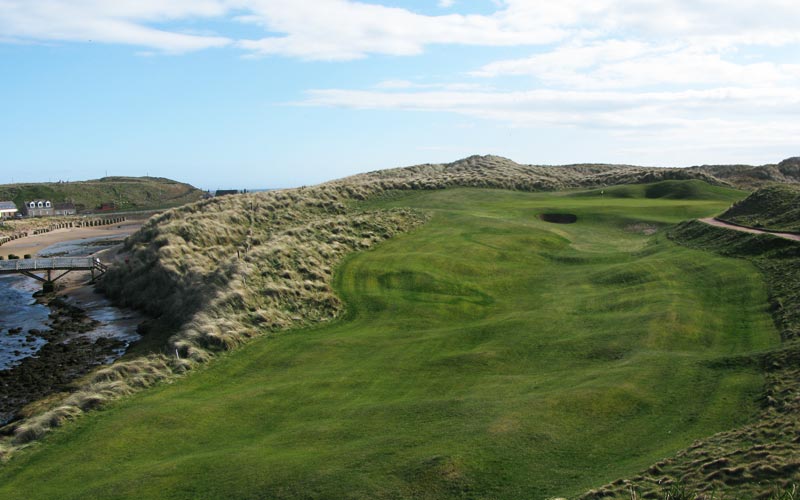 With the river left and the dunes right, only a well-struck shot will find and hold the green that was benched into the far hillside.

Sixth hole, 505 yards; A rarity in links golf: a par five with a gambling second shot, made here by the burn that cuts across the fairway some 60 yards from the green. The sloping green complex provides the right incentive for the player to have a short approach. 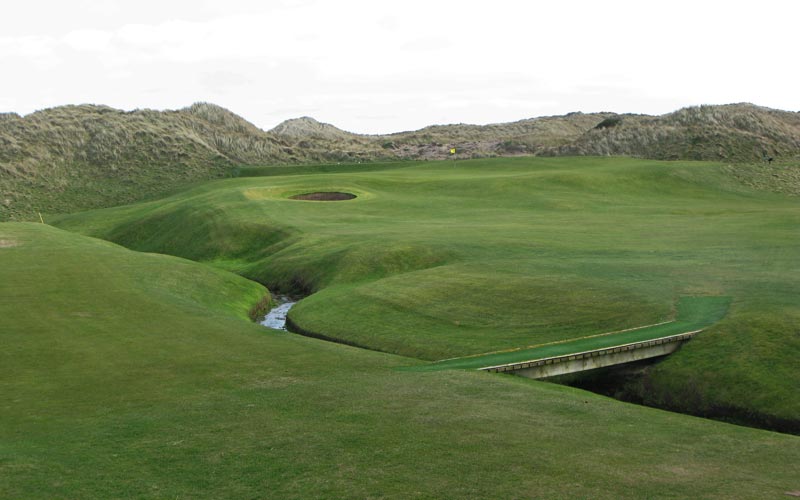 Snaking along in front of the green, the wee burn provides much of the strategy for the par-five sixth.

Seventh hole, 385 yards; One of golf’s first great doglegs, this one remains as strategically interesting as ever because no silly trees or the like have diminished the bite-off-as-much-as-you-dare tee shot. A gamble is well worth it because the long narrow green is hard to hold with anything more than a short iron. 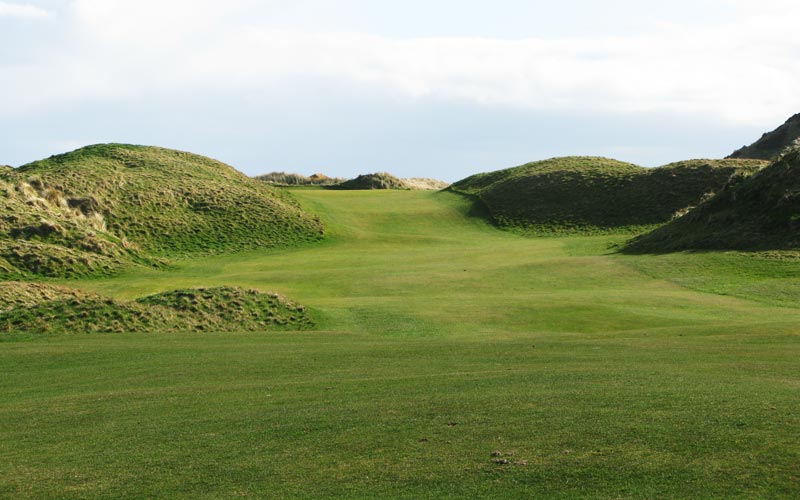 The classic dogleg to the left seventh. Hole locations on the left side of the green are completely obscured by the flanking dune.

Eighth hole, 225 yards; Whether considered a par three or par four, it doesn’t matter – either way, a three makes the climb to the next tee much easier. Half par holes of this type can be most unsettling – given the steep back to front pitch of the green, plenty of fives are taken here too. Out of frustration, the golfer then proceeds to make chop out of the next several holes as well. Every architect needs to get inside the player’s mind and holes of this length do it most effectively. 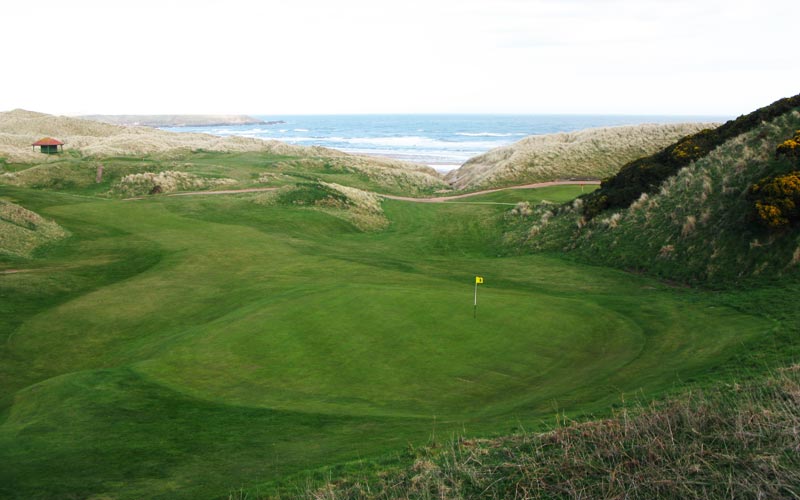 Looking back down the bunkerless eighth hole with the built-up green complex acting as the hole’s primary defense.

Thirteenth hole, 540 yards; A straight away hole, yet one that is better played in a zig-zag manner after the tee shot. The burn makes a good tee shot of importance, as an errant one might result in having to lay up short of the burn, leaving a third shot of over 230 yards. The dominant feature of this hole, however, is the large mound short-right of the green, providing a clear shot only to those who approach from the left. This hole is a prime example of the threat of a blind shot dictating play of a hole. 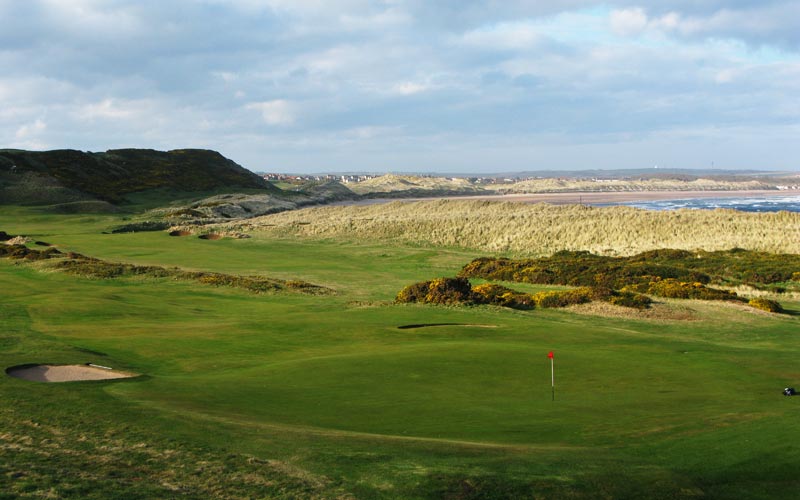 Looking over the twelfth green in the foreground, the long thirteenth stretches out in the distance.

Fourteenth hole, 360 yards; Even though some may feel that this hole was ‘forced’ into the small area between the severe dune on the left and the sea on the right, the hole belongs. The right side of the fairway is not visible from the tee, making the player believe the hole is much tighter than it actually is and encouraging the player to play toward the gorse-covered hillside on the left. Isn’t it interesting how players will play toward the trouble they can see rather than toward the safety they can’t see? The approach is among the most fun on the course, requiring a short iron to a narrow, sunken green. The only debatable point is whether the slope down to the green should be cut to fairway height or rough height, as is the case now.

As with County Sligo, the least interesting holes are among the most scenic, with the ninth and tenth offering spectacular views down onto the rest of the course and out to the North Sea. The player keeps expecting a letdown after the glories of the fourth through eighth, but alas he never gets one.

The course does have distinct stretches of holes. The first three are all fine holes followed by the aforementioned fourth through eighth. The ninth through twelfth are rather standard (the eleventh is hampered by the danger of being near the landing area for the tee shots from the tenth). The thirteenth through sixteenth are exhilarating. And finally, the last two are good, sturdy holes that make a player think to the very end. In fact, Simpson was particularly fond of the eighteenth, which seems a bit curious to the author. 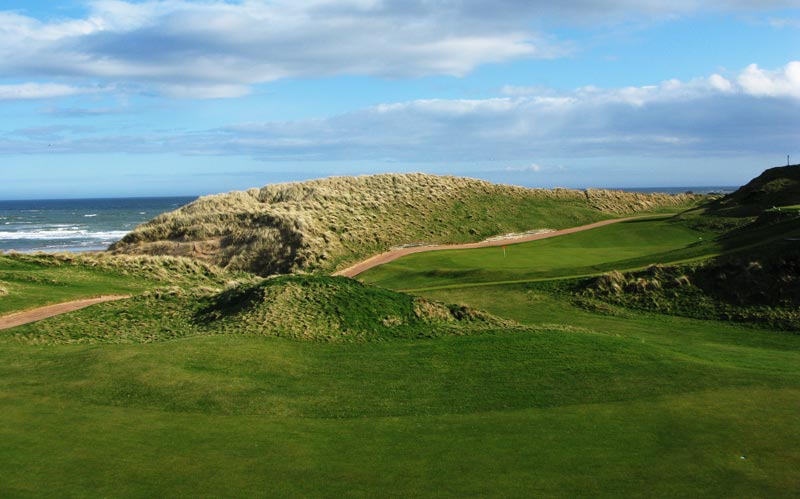 The view of the fifteenth green from the eighth hole shows the combination of wonderful land and natural setting that make Cruden Bay so special.

What does Pete Dye, who has moved plenty of land in his day, think of all this? He loves it and puts Cruden Bay among his handful of favorite courses. In fact, he returned there for inspiration with Herbert Kohler when they were in the process of building Whistling Straits. The authors can’t help but wonder: what would Dye have done given the same piece of property?