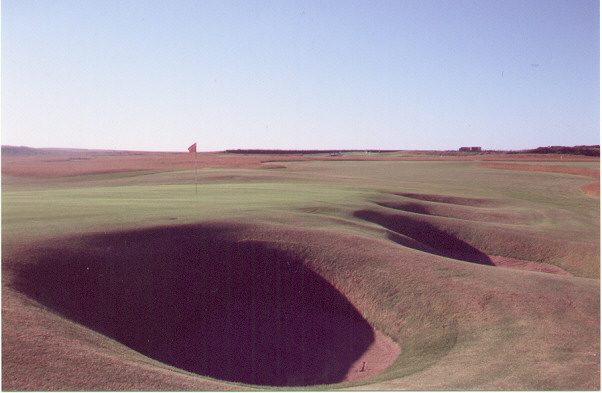 Though opened in 1998, Craighead enjoys a more timeless quality.

When the decision was made to build a second course on the acreage beside the Balcomie golf course at Crail (the seventh oldest golf club in Scotland), the question remained who should design it. Located twenty minutes in a car from the university town of St. Andrews, the clifftop property affords views to the south of North Berwick and to the north past Carnoustie. Would the Society elect to go with a professional golfer-turned-architect as at Loch Lomond and Gleneagles or would they go with a professional architect? In selecting Gil Hanse, the Society ignored the trend and Hanse became the first professional American architect to build a course in Scotland.

Hindsight shows that the Society made a correct decision because a very fine course is the result despite there being several limitations that complicated the design task. Firstly, the property was only 114 acres, which is small for a windy site, and that was exacerbated by the fact that it was irregular in shape. Also, though the property is located along the coastline of the North Sea, it is clifftop and as such, it isn’t true links land blessed with natural humps and bumps. Indeed, the property is on broadly sloping ground with holes 1, 2, 3, 4, 5, 9, 10, and 11 on one side of a gentle hillcrest and the remaining holes on the other. 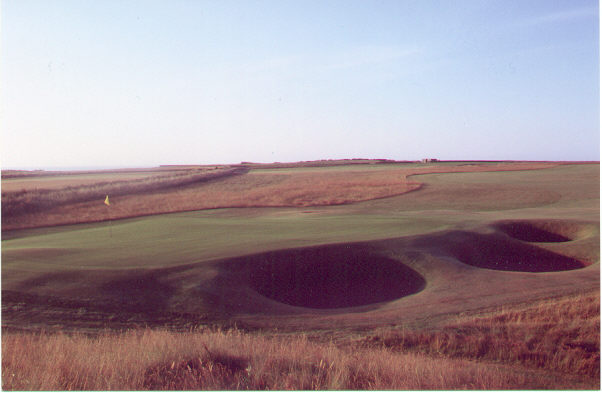 This view from behind the ninth green captures the nature of the broadly sloping property.

Another limitation on Hanse was that an ancient stone wall randomly crossed the property. As Hanse tells it:

‘One of the most interesting challenges we had to deal with at Crail was the emphasis on the archaeological importance of the site. Running through a section of the site is The Danes Dyke, which is a wall that was erected by the Danes and it precedes the birth of Christ. Adjacent to the course is the ancient harbour of Crail, which is one of the oldest harbours in Scotland. The Vikings would land in this harbour and then set forth to rape and pillage the Fife countryside. After some bruising battles, they finally erected a wall as a last line of defense, before getting in their boats and setting sail for home. Needless to say, this is a very important archaeological site, and one that is remarkably preserved. Our challenge was to route the golf course on a small piece of property, and use this wall as a strategic feature because their was no way to avoid it. With the archaeological interest in the site, the Club had to hire a full time archaeologist to follow us around site. So whenever, my associate Rodney Hine, or I went to shape a green or bunker, this guy had to sift through the dirt before we could proceed with final shaping. It worked our okay, because he was a good guy, and oddly enough he was Danish. I also think that we used the wall in several creative ways, as well as in varied ways on the holes that it intersects. It does create a few blind situations, however, the Scots are not as squeamish as we are about blind shots, and I thought that this might be a great opportunity to incorporate the element of blindness into one of our courses. ‘ 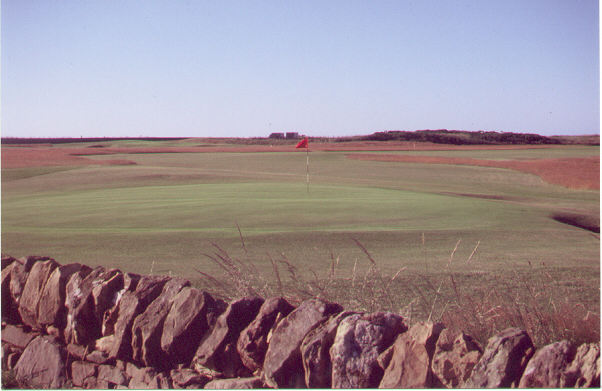 Note the stone wall in the foreground.

Yes indeed – the task of routing the holes was never going to be easy. Hanse was determined to make the sides of equal interest and wanted to get to the shoreline on both the outward as well as the inward nine. In addition, he appreciated that constant changes in direction were a must for the windy location. After mulling over countless routings, Hanse finally found one that would accommodate such requirements. One of the keys was that in the tightest spots on the property, he cleverly placed the shortest two shotters (3, 10, 11, and 12) and two of the one shotters (7 and 13). 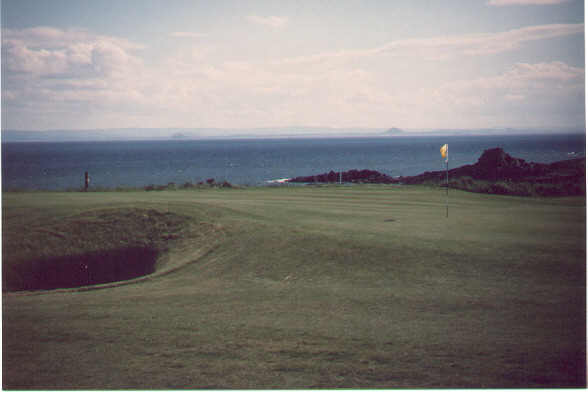 Hanse was successful in getting both nines to the shoreline – pictured is the one shot seventh green.

Apart from the ancient walls, the land itself was only moderately interesting and it was up to the architect to instill character into the holes. And knowing that your handiwork would always be compared to Old Tom Morris’s Balcomie course across the club entrance drive didn’t make the task any easier!

After the routing, Hanse focused his energies on the two design elements that would matter the most: the bunkering and the green complexes. Hanse did little shaping with the rest of the property as such movement of dirt would have invariably looked manufactured and man-made.

The bunkers have revetted faces but Hanse wanted more than just that. According to Hanse,

‘We also wanted to be a bit more artistic with the bunker shapes, and we were able to change the angle of the revetting in order to accomplish that look. Walter Woods, the former greenkeeper of the Old Course, came down every now and again to give us some advice, and he was quite keen on our bunker shapes. Jim Finegan also gave us some nice complements on the bunkering, stating that it was ‘the nearest thing to Muirfield bunkering, apart from the great course itself.’

As is evident from the photographs in this course profile, the bunkering is particularly noteworthy. Apart from their construction, an interesting aspect to bear in mind is that their placement was done with today’s technology in mind. Other links courses have become too flattering as the good player can fly too many fairway bunkers with ease, thus undermining the integrity of such designs. This is emphatically not the case at Craighead, and the placement of the bunkers coupled with the height of their faces, gives the course plenty of bit and strategic merit. 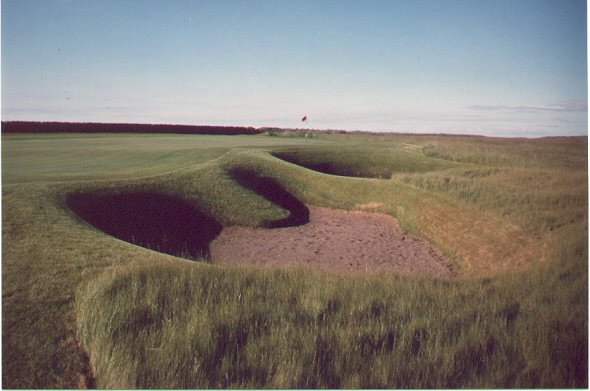 The distinctive greenside bunkering at the eleventh hole.

As for the greens themselves, they feature a lot of interior contour. In fact, given that they are medium in size, some people think that they have too much contour. However, similar to Inniscrone, the golfer needs to play the course several times before making such a judgment as typically the contours can actually befriend the golfer and be used to work the ball closer to certain hole locations. Such knowledge will not be evident on the first round or two, but the more you play the course, the more you begin to appreciate that Craighead is a very fine placement course. (And yes, the same has been said of The Old Course fifteen miles west of Crail). 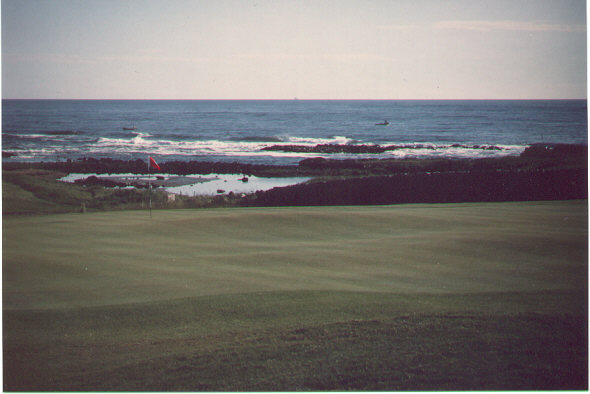 The imaginative green contours found on the tenth are indicative of those on other greens.

First hole, 490 yards; A prime example of the difference that a professional architect can make on land that offers little. The 1st tee is at the bottom of a gradual rise and the hole could easily be an uphill slog. Instead, Hanse routes the 1st as a dog leg to the left past a nest of bunkers and caps off the hole with a green that is similar in many respects to the Road Hole green complex. A single pot bunker fronts the middle of the shallow green which is only 15 paces deep on the left half. The golfer should pay particular attention to the general hole location before he plays his second shot. The stone wall is a mere seven paces beyond the green and can stymie the overly bold approach shot.

Second hole, 400 yards; A fine misdirection hole as the flag is well to the right of the fairway and the golfer and his stance are invariably pulled to the right- exactly where Hanse located a pair of deep bunkers. The green itself runs away from the golfer as it goes down the broad slope in the general direction of the 1st tee. The green is open in front and judging how to bounce the approach onto it is something that a Scot far excels at compared to an American visitor who might not stay long enough to appreciate the shot that the green requires.

Fourth hole, 460 yards; A handsome hole that again bends (this time to the right) around a pair of well placed bunkers. The green contours can be used to feed the ball to the right hole locations.

Sixth hole, 555 yards; The golfer is now on a broad slope of land that runs down toward the North Sea. The green itself runs in the same direction as the land, which is to say, away from the golfer. Such front to back greens make any pitch a ticklish undertaking.

Tenth hole, 300 yards; A supreme design that can be played in countless ways. A nest of bunkers cut into the fairway 200 yards off the tee on the right and another grouping cuts in from the left at the 240 yard mark. A single pot bunker 270 yards from the tee sits on the direct line with the green and must be skirted if the green is to be driven. Of course, should the golfer fall to avoid it, just achieving ‘par’ becomes a struggle. One of our favorite holes in Scotland due to its numerous options and the fact that it plays equally well for all skill sets.

Fourteenth hole, 420 yards; While the location of the hole along the cliff is the show stealer, the real art to the design lies around the bunkerless green complex and its right to left slope toward the sea. The player can play his approach well to the right with a draw and watch the ball release across the green to the left hole locations – perhaps the most satisfying shot on the course. 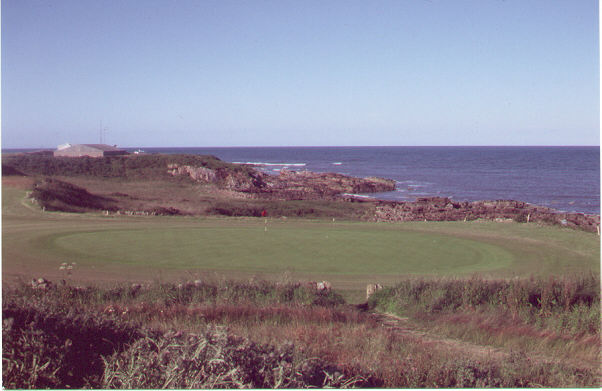 Taken from behind the fourteenth green, the right to left slope from the golfer’s perspective is evident.

Eighteenth hole, 460 yards; Just as the first hole traversed up a broad slope, the Home hole goes down it and for the umpteenth time, Hanse let the green follow the natural slope of the land. Thus the golfer is faced with an appealing approach where he can land the ball short of the green and watch it bound over the two foot rise at the front of the green and chase down the length of the green.

From the back tees, Craighead measures a respectable 6,730 yards and from the tees that many visitors should play, the course is 6,250 yards. However, the deep bunkering coupled with the green contours make it difficult to score well on, especially if a breeze is about and you are a first time visitor. Importantly though, if you take the time to appreciate how the holes are meant to be played, you can be mightily rewarded. Indeed, the authors came to the conclusion that basing oneself in the charming (and less expensive) town of Crail and then tackling St. Andrews, Elie and Lundin Links makes imminent sense, such is the appeal of Craighead.