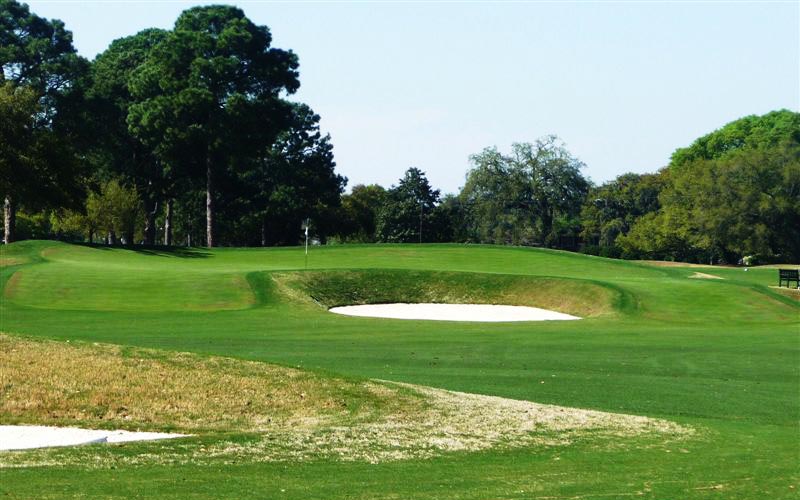 This is not the first Seth Raynor course profiled on this site, nor will it be the last. Though it is one of his less heralded designs, we maintain that is the case simply because of the subdued land rather than Raynor’s own design effort. Indeed, there are several original features here that make it a must for any Raynor student to see.

Think about some of the Raynor courses profiled on this web site. Fishers Island along – and over – the rugged shore line, Yale (!), Shoreacres and its ravines, and Camargo with its massive rolling land. Raynor’s engineered style always seems at home across such terrain and almost seems to give such dramatic property order and playability.

However, in the case of Charleston, the land was essentially flat, no surprise being that it is in the Low Country of South Carolina. How would Raynor’s style fit onto featureless property? Would it stick out as perhaps too engineered? The answer to that question is emphatically ‘No’ as in fact he had previously demonstrated at the none too hilly Country Club of Fairfield. Indeed, given the success on these subdued landscapes, the authors think that Raynor did well to stick with his ‘winning formula’ (a horrible expression, we admit) for designing courses.

A well preserved Raynor course is readily identifiable. His tees were always geometric and rectangular in appearance. He moved little land once off the tee until the golfer approached the green. His bunkers were in general deep with a flat bottom and a steep grass face. His greens were large and even often times square-ish but he wasn’t afraid to build bold movement within the greens. He tried when possible to adopt the four short holes as described in detail in the George Bahto Feature Interview contained in this site. Yes, Raynor definitely had some firm design beliefs.

And once again at Charleston, he brought all these beliefs and design concepts to bear with great success. One result is that Raynor imbued virtually all his holes with some form of character. The fact that his layouts are generally solid throughout is one of the principle reasons we feature his courses as frequently as we do. Think about it. Fishers Island, Yale, Camargo, Shoreacres, Yeamans Hall – there are very, very few indifferent holes. 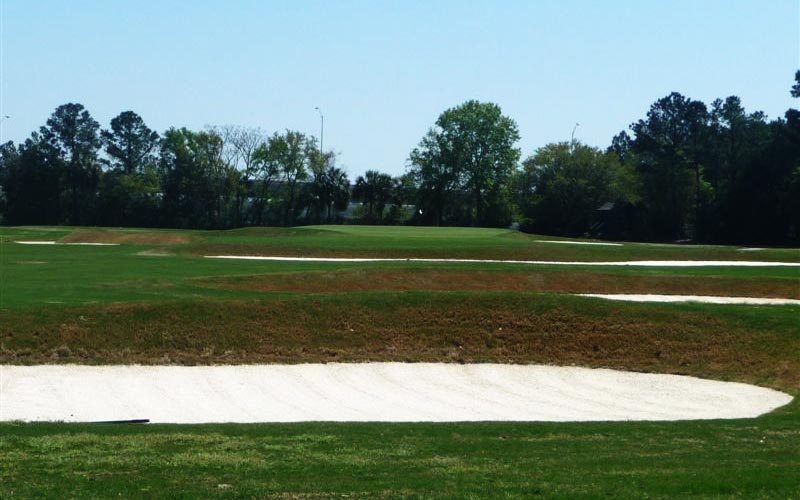 Take the seventh hole at Charleston for instance. Off the tee, the hole is not visually compelling  and the golfer feels like this may be a fairly mundane hole. However, as you approach the green, the golfer sees that both the left and right back quadrants are independently raised with a gully between them. Altogether, this Maiden green with its double plateau is striking and the hole becomes one of genuine playing interest. 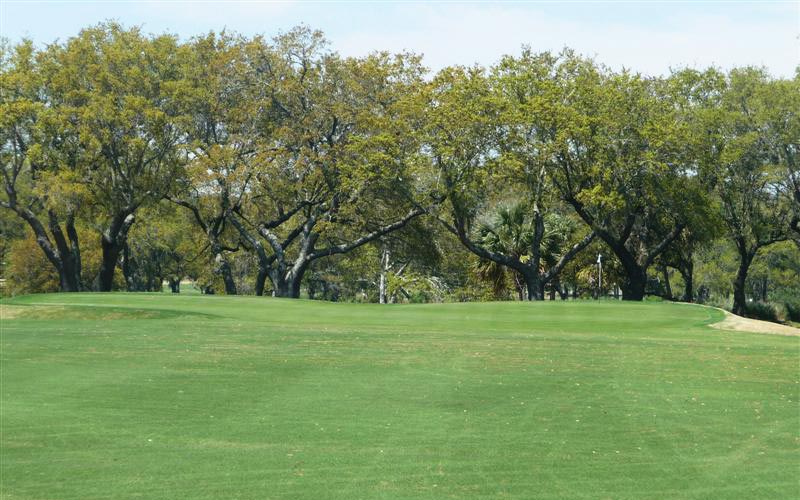 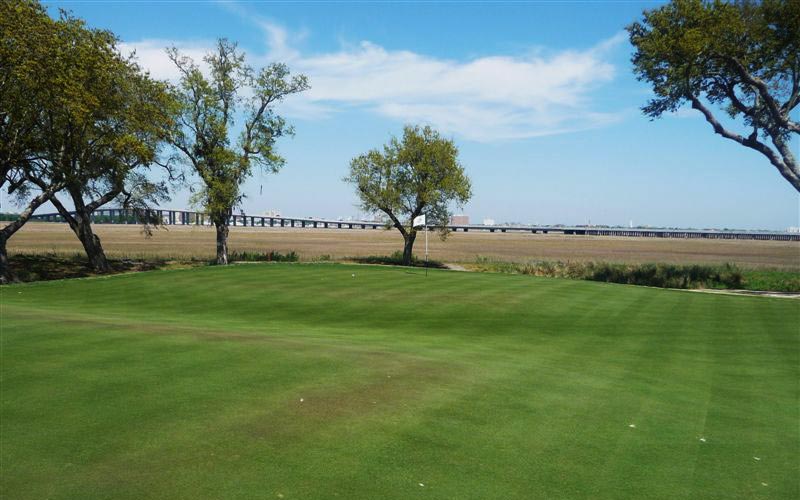 At  Country Club of Charleston, there are three (the eleventh, fourteenth, and sixteenth) standout holes that would figure in any Raynor eclectic eighteen. When combined with the rest of holes here, the authors believe Charleston is one of Raynor’s more original designs. In particular, some of the imaginative green contouring on holes such as eighth, tenth, and fourteenth rank among Raynor’s finest.

Cruelly speaking, the course was the beneficiary of a Hurricane Hugo in 1989. Gone are many unnecessary trees that had been planted after Raynor left. The course now enjoys a great openness and the expansive views across the property also highlight how little dirt Raynor moved other than in the tee and green areas. This ‘cleanness’ is quite refreshing, especially when compared with the overdone modern courses along the South Carolina coast. Rightly or wrongly, the authors think virtually any other architect today would have tried to ‘shape’ the land more, and the result would have been less interesting.

Alas, many of Raynor’s features had been either lost or worn down with time. In 2005, the Club Board decided to do something about it and hired Brian Silva to enthuse Raynor’s design charactertistics back into the course. As Brian recalls,

Charleston was a unique job as their greens had been re-built in the 80’s and the changes from Raynor’s originals ranged from slight to major. Thanks to the folks on the Committee who had played the course for decades, we had people who could help us where there were no photos or other such historical material. During my frequent visits, these Committee folks were extremely involved in the process of getting green sub grades back to contours more like these long term members remembered. In addition, the Club had a great aerial that was very helpful for bunker positions and shapes. Restoring the Lion’s Mouth at the sixteenth was particularly rewarding and created a number of interesting experiences. First of all, we all agreed to head down a certain “road” in handling the “extensions” of the green on either side of the mouth. However, this road changed one day when I was speaking with the superintendent at a Raynor course  in Massachusetts. When I mentioned to him that Charleston contained a Lion’s Mouth, Mike Stachowicz told me he had a photo I might be interested in which he emailed me showing the original Lion’s Mouth at Charleston circa the 1930s. Our approach for the “extensions” swiftly changed to match the photographic evidence!! Then when we were working on the sub grade of the main part of the green itself, some folks felt we weren’t getting it quite right. The back and forth during weekly visits where we wanted to approve a green’s subgrade were quite interesting as there was an impatient architect who wanted to keep things moving and committee members who encountered trouble trying to describe what they wanted. They liked the general look of the subgrade and the rolls that divided the green into different cupping areas as you went from one side to the other but felt something was missing. Finally, in a bit of frustration, one of the Committee members said, “Well, Brian – the green to the right, left and rear had more of a feel of a “bowl”. I then said what I often did at this early morning stage of my weekly visits, “Why don’t you come back at lunchtime and we’ll look at it again.” His input of more of a “bowl” made the rest of the subgrade work easy as it involved tying the parts of the green more in the center of the putting surface to the high immediate surrounds that worked from about 9 to 3 on the “clock”. An hour or two later we had the sub grade where we thought it should be and this was resoundingly confirmed by more that one committee member during lunch. And it was a great experience because it showed the Committee folks – people who had played the original greens hundreds of times – that a general term like “bowl” was enough to get us very close to the intended finished product…..and this helped us to more frequently avoid the old adage about Americans and Brits of people separated by a common language!

George Bahto, the leading historian on Raynor, notes Raynor’s great strength was his routing and that is the case at Charleston as well. As much as any another architect, a Raynor course is always a delight to walk.

Third hole, 160 yards, Eden; As with Camargo, the authors can never figure out where Raynor got the fill to push up this green complex. However he did it, he did a great job as the pushed-up target is beautifully presented with minimal fuss. 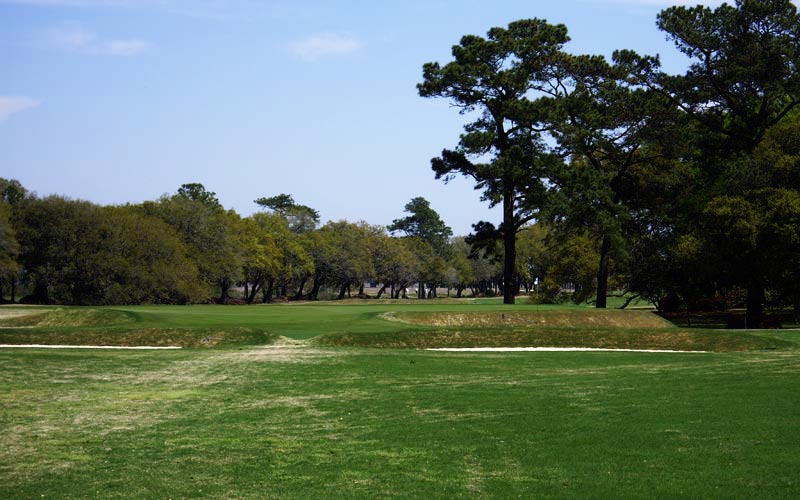 Eleventh hole, 185 yards, Redan; One of the most feared holes in the southeast, this hole has intimidated many of the country’s best amateurs to lay up during the Azalea Invitational. Lay up you say? On a 185 yard hole with no water?? How can that be??? Simply put, this green is a shelf with an eleven foot deep bunker on the right and a seven foot bunker on the left. The bunker edges are right up against the edge of the green which narrows to just eight paces wide at the back. Their fear, as is yours, is that you become involved in volleyball as your bunker shots fly merrily from one bunker across the green to the other, and so on and so on.  The harshness of the hole is in stark contrast to the reasonableness of the rest of the course and to Raynor’s work in general. Indeed, some contend that the green surface has actually risen two or three feet, due to the accumulation of sand thrown onto the green over the years since 1929 when Raynor designed the course. Still, the authors wouldn’t change a thing as it gives the course the kind of high drama rarely found on flat terrain. 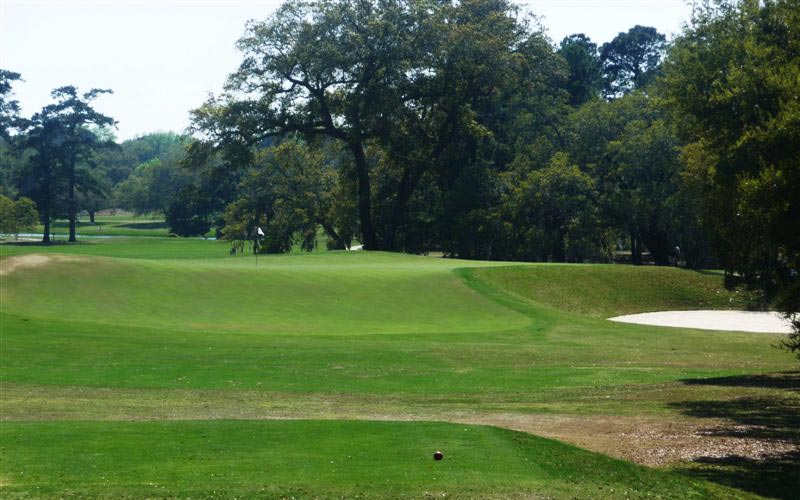 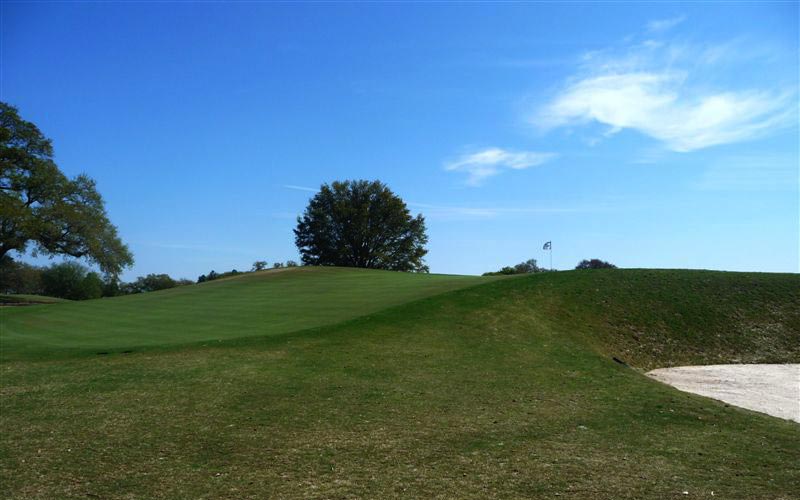 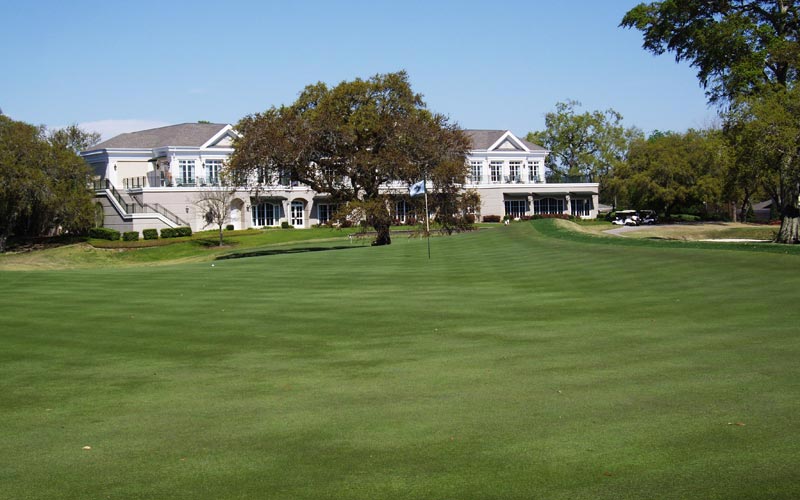 Fouteenth hole, 335 yards, Knoll; Rivals the third at Fishers Island and the seventh at Country Club of Fairfield as one of Raynor’s finest short two shotters. The fairway is tightly bunkered both left and right, and they pinch the fairway in to ten paces wide at the 230 yard mark from the tee. The green is mammoth and contains a back-right plateau that tests every nerve for a golfer to attack. 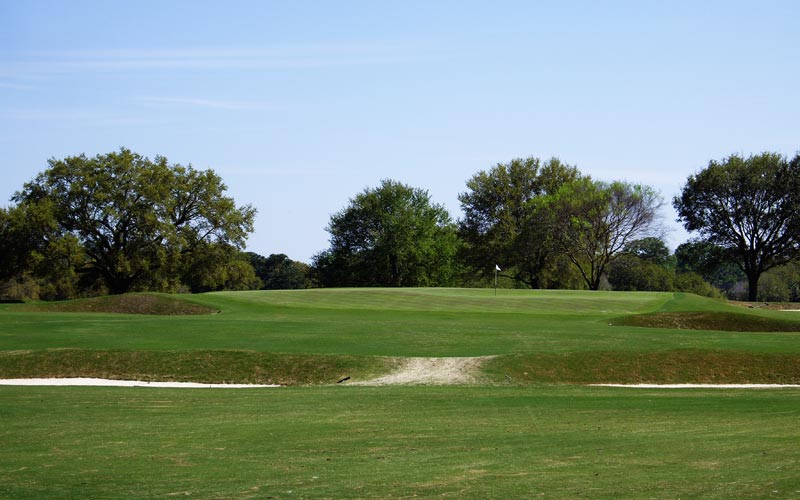 Fifteenth hole, 535 yards, Plantation; This hole was greatly improved by Brian Silva’s work  in 2006 as the berm that dominates the strategy of the second shot was properly brought back as a real hazard. Situated 115 yards from the front of the green, the golfer dearly likes to get past it in two as he chances for a birdie are greatly enhanced. 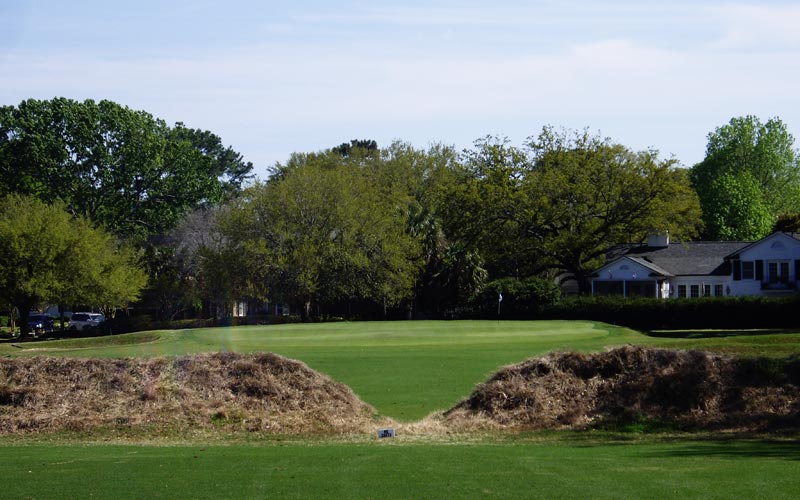 Sixteenth hole, 430 yards, Lion’s Mouth; The second most famous hole on the course, the Lion’s Mouth hole features a gaping seven foot deep circular bunker eating into the front of the elevated green complex. The green in turn horseshoes around the bunker and the effect is sensational and thoroughly original. A hole that Pete Dye, who was greatly influenced by Raynor, would be proud to call his own. 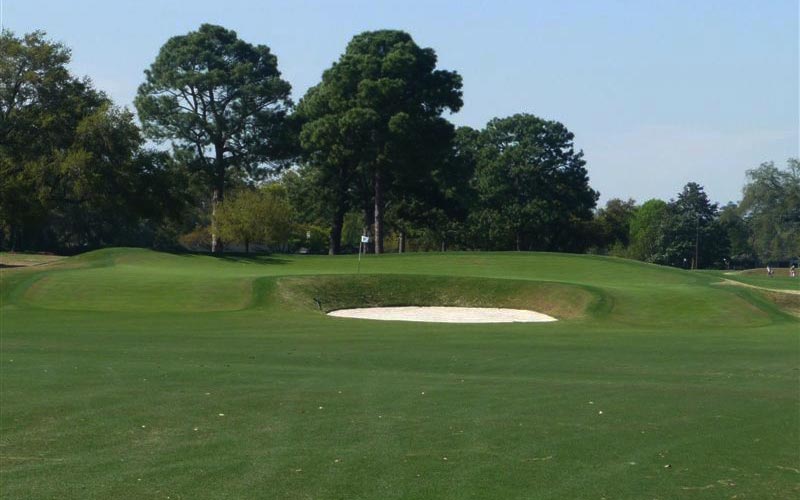 As Raynor’s work has gained great recognition, critics have surfaced. They argue that Raynor’s style never evolved and didn’t add or further the development of architecture. These critics would use Charleston as further proof to their point. To that, we say, so what? We can’t imagine anyone building a finer course over this property, and that is all that matters. In fact, many architects would benefit from a closer study of the cleanness of this design.