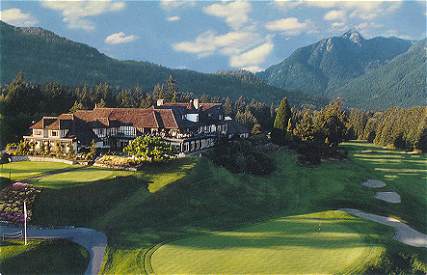 The clubhouse is on the highest point of the property, with the three shot 18th finishing beneath it.

In the 19th century, Old Tom Morris was given some once in a lifetime sites including Royal County Down, Macrihanish, Lahinch, Royal Dornoch, and Westward Ho! What architect in the 20th century was given the best property with which to work? Alister MacKenzie was given some beauts but there is actually another architect who designed four courses that the author would put among the world’s top 25 scenic courses. From Cape Breton Highlands in Nova Scotia to Jasper Park and Banff Springs in Alberta, Stanley Thompson was very fortunate to have had so many first rate sites. And he was equally blessed at Capilano as much as any of these other postcard perfect places. In fact, he wrote to the club saying Capilano “may prove to be the best endeavor on this continent.”

Capilano is in Vancouver, British Columbia. The stately and grand clubhouse occupies the highest point on the club’s properties. At first glance, the property might have been the most vexing to Thompson as it falls steeply down a hill. But, as with all his courses, Thompson got the routing right. After the first six holes where the golfer has plunged some 300 feet down hill, the golfer could be reasonably wary of a long slog back up a hill at some point. However, Thompson does a masterful job of tacking back up the slope. Other than the uphill medium length par three 9th, the golfer is never conspicuously aware of hitting up a hill. Along with the Chung Shan (Nicklaus) course in Senzchen, China, and Huntingdon Valley in Pennsylvania, this course is the best example of sidehill architecture the author has seen.

Jack Nicklaus once remarked that Royal Melbourne is an ideal members course. It was meant as a glowing compliment (even though it wasn’t taken that way by some sensitive Aussies). The author views this compliment as equally applicable to Capilano. The course has remarkable flexibility and has hosted numerous professional events. The course features many half par holes including the 1st, 3rd, 10th, and 16th holes.

As befitting a course situated on such unique property, the course enjoy sits own distinctive flow. The first six holes are aesthetically very pleasing. By plunging the golfer steeply down the 1st and the 6th, Thompson diffused a lot of the property’s potential awkwardness. Along with the 5th, these three holes offer superb views across to Vancouver and a sense of spaciousness. Interestingly enough, the downhill 6th seems so inviting and user-friendly. Looks can be deceiving as more than one golfer has tried to give the drive a little bit extra and missed the fairway into the thick evergreens. The moral: don’t get greedy as a long iron off the tee still leaves a shortish club in. The score needs to be built through the first six holes as the course gets progressively tougher. 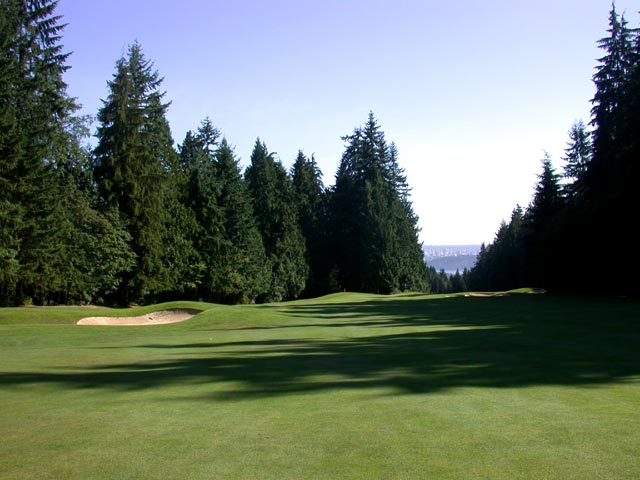 The tremendous view of downtown Vancouver.

The next six holes largely tack their way slowly back up the hill with a series of holes that are roughly parallel. The 7th is the hardest par on the front. The golfer sees a tough four par that has plenty of length and beautifully contoured bunkers whose sand offers quite a contrast to the omnipresent evergreens. However, the golfer comes to realise over time that the real difficulty comes from the sloping fairway. The golfer will face similar uneven stances late in the round on some other crucial four pars. Two par threes are in this six hole stretch. The aforementioned uphill 9th looks and plays hard. The 11th looks more cheerful down a hill over a pond to a beautifully framed green in its on amphitheater. However, the fiercely pitched green leads to a number of undesired three putts.

The finally six holes rank on a short list of the world’s great closing stretches. The reason is simple: the holes are laid over compelling land and possess a stiff challenge.

Second hole, 405 yards; The beauty of the towering evergreens that line the fairways immediately strikes the golfer. The green is located on a plateau that falls off sharply to the right. 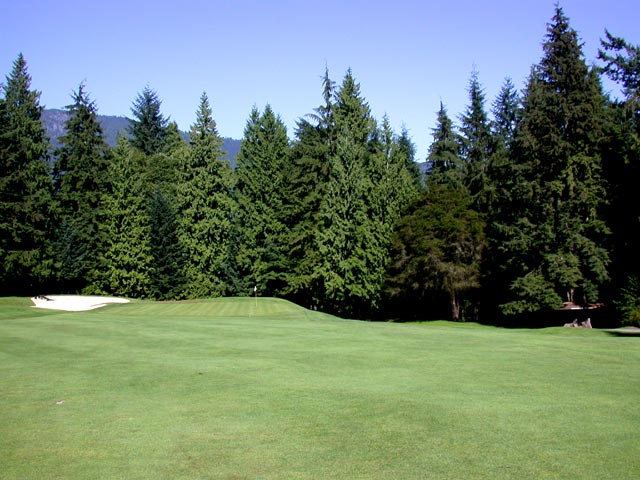 Don’t miss on the short side on the approach to the second.

Thirteenth hole, 395 yards; The green site makes the hole as Thompson placed it on the far side of a deep gully. The weaker golfer is given the reasonable option of hitting a full lay up to the gully and then wedging onto the green. 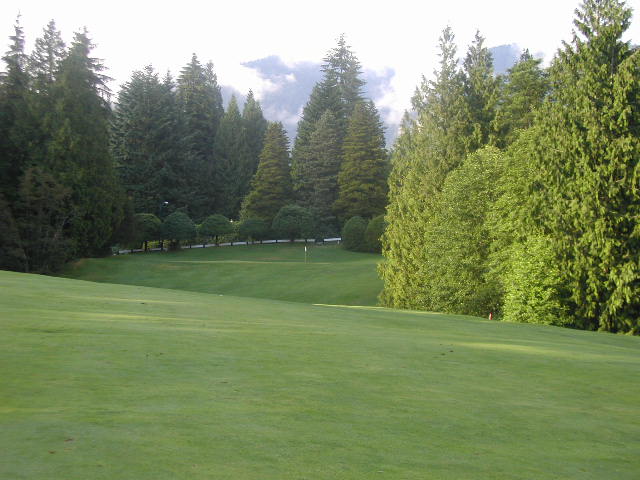 The uphill approach to the 13th shelf green must carry a 20 foot gully.14th hole, 145 yards; The final six holes compromise one of golf’s great finishes. Though the 14th may be the easiest of the six, it requires the most finesse of any shot on the course and is a great foil for the other five holes.A delicate shot is required to the steeply downhill 14th with a creek around its left and back.

Fifteenth and Seventeenth holes, each 425 yards; These holes have several similar characteristics and are none the worse for it. They are both big two shotters played toward the mountains in the background. The broad picture at both is superb. However, the real challenge to these holes lies in the intricacies of their fairways, which are none too flat with all sorts of humps and mounds. These irregular fairways create all kind of lies, be it one’s first round her on one’s 100th round, which is but one of the reason why the golfer never tires of the prospect of playing Capilano. 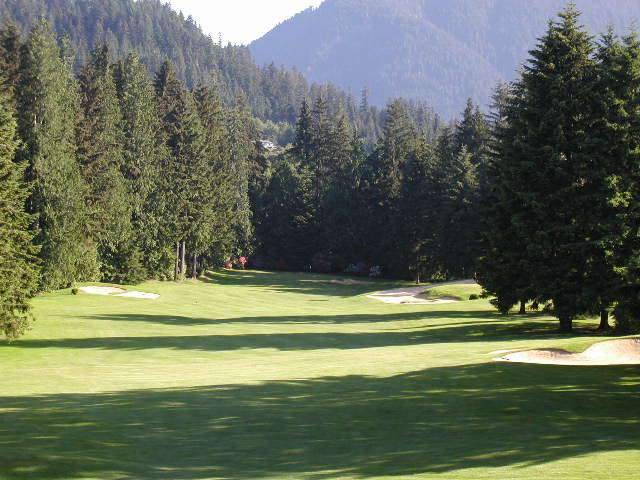 The picturesque 17th with its twisting fairway heading toward the mountain in the distance.

Sixteenth hole, 255 yards; There is no more boring hole than a long one shotter whose green is defended across its front whereby the hole only accepts an aerial shot, a shot beyond the skill level of the vast majority of golfers. Conversely, long holes that are open across the front and accept a run up shot can be quite enjoyable as the sight of a long ball bounding along the ground never loses appeal. 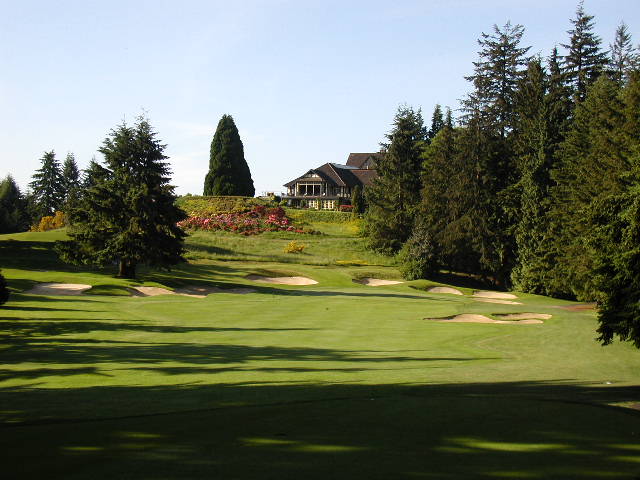 Ringed by bunkers left, right and beyond, the 16th green is open in front. The proud clubhouse sits beyond on the hillside.

Eighteenth hole, 555 yards; A superb closing hole. A genuine three shotter over rolling terrain to a green elevated above the golfer. The hole becomes progressively harder as the tired golfer starts to make mistakes. Playing the hole backwards in the mind will highlight the hole’s challenges. The green is the largest on the course and presents its own problems. A quick peek before the round commences at where the hole is located is highly recommended. The green is located on a shelf above the fairway with ominous bunkers cut into the hillside shy of the green. The golfer would rather not have to clear them with anything more than a mid iron. Therefore, the golfer must hit the fairway off the tee. Otherwise, he will be unable to advance his second shot a suitable distance up the fairway to leave him with a short iron approach.

The property is infinitely prettier for Stanley Thompson’s efforts. The verdict on the merit of this course rests with the knowledgeable membership: they haven’t touched it in sixty years. 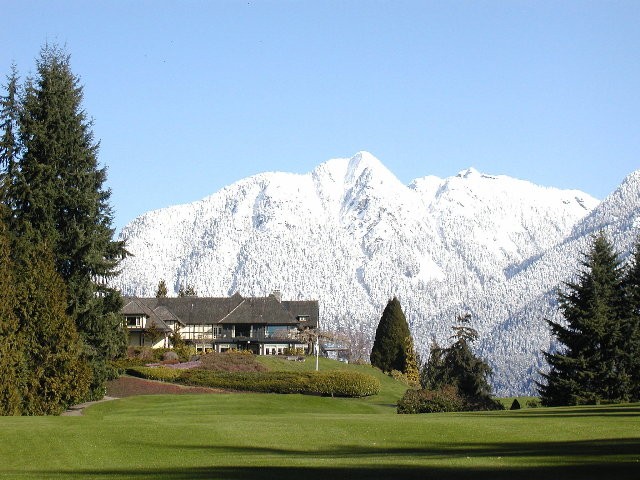 One of golf’s greatest settings – the majestic Capilano in the sping time.